Disability pension from back pain among social security beneficiaries, Brazil

Back pain is a public health concern in many Western countries.7,12,22,27 It is estimated a point prevalence of back pain around 30% and a lifetime prevalence of 70% to 80%.1 Although back pain is a highly prevalent condition, in about 85% of cases an accurate pathological diagnosis cannot be made and they are considered either idiopathic or of nonspecific origin.5,19

For most experts back pain is synonymous of low (lumbar) back pain.6 Some studies have examined secondary data with the International Classification of Diseases (ICD) codes for the outcome and back pain included cervical pain, thoracic pain, sciatic pain, intervertebral disc disorders, spondylosis, radiculopathy, in addition to the most common of these conditions, low back pain.14,15,27

Despite the difficulty in standardizing the outcome, the resulting economic loss has been significantly high according to studies on costs of back pain and low back pain. In the UK, in 1998, back pain caused the greatest economic burden among all other diseases assessed.22 In the Netherlands, in 1991, Van Tulder et al27 found that the indirect costs associated with absenteeism and disability from back pain were the highest among all diseases. In Sweden, Burström et al3 concluded that patients with back pain had low health-related quality of life than those with other conditions such as diabetes, angina and asthma.

In the United States, Deyo et al4 reported that the costs with epidural steroid injections, opioid analgesics for back pain, lumbar magnetic resonance imaging and spinal fusion increased, 629%, 423%, 307% and 220% respectively in recent decades. However, this cost increase was not parallel to reduced work-related disability rates in the population. In contrast, for those conditions with more effective prevention and treatment as well as cardiovascular and pulmonary diseases, work-related disability rates dropped during this same period.4 In a study conducted in North Carolina, US, on the trends of low back pain, the authors concluded that much of the growing costs with chronic low back pain were due to its increasing prevalence.11 Another study showed that back problems were the second leading cause of lost productivity in the US following headache.25 Although the direct costs associated with back pain management are increasing, most studies have showed that they are largely related to temporary and permanent work-related disability.7,8,22,27 The most severe outcome of this condition is permanent disability pension, which is hardly reverted.20,21

According to two studies carried out in Norway,14,15 the risk factors for disability pension and prognostic factors for back pain included being female; low education level and low socioeconomic condition; comorbidities; fatigue; and low professional qualifications.

Knoplich18 found in 1987 that back conditions were the second leading cause of disability benefit and disability pension in Brazil. Musculoskeletal conditions were the main cause of social security disability benefits paid to workers in Porto Alegre, southern Brazil, in 1998, followed by mental disorders and cardiovascular diseases.2 In a study conducted in Bahia, northeast Brazil, based on data from the Brazilian Social Security Administration, among the benefits paid due to occupational diseases, 70% were due to musculoskeletal and connective tissue diseases and 14.5% nervous system diseases. Higher rates of lumbar disc conditions were seen among workers in the industries of transport, postal services and telecommunications, but causation was not established in a significant proportion of benefit cases.24

In Brazil there are neither studies assessing the rate of disability from back pain in macroregions and states nor economic analyses including direct and indirect costs associated to this condition. Thus, the objective of the present study was to describe disability pension from back pain.

Only the 2007 data were used in the analysis due to a significant reduction in the benefits between 2005 (24,239) and 2007 (10,839) and the fact that the team of medical experts who were paid per case examination was replaced with experts from the Brazilian Social Security Administration.

The incidence rates of back pain in disability pensions by age, gender and Brazilian macroregions and states were estimated using as denominator the average monthly number of social security taxpayers by the same variables. The correlation between the Human Development Index (HDI) and these rates by state were assessed using Spearman's correlation coefficient. For variables with unknown total taxpayers, we calculated the proportions, ratios of proportions and 95% confidence intervals (95% CI) of disability benefits from back pain by federal unit and industry. A test for differences between proportions was performed to compare the proportion of rural and commercial workers in each Brazilian state and nationwide.

Disability pensions from back pain are assumingly provided to individuals who have made 12 or more contributions or at least four contributions in those cases where the beneficiary status was lost due to non-payment. The Social Security Statistics Annual Reports do not have information available on the actual number of beneficiaries. Thus, the average monthly number of social security taxpayers was used as denominator to calculate back pain rates in order to prevent overestimating the denominator with taxpayers who made only a few contributions. A similar method was used by Hagen & Thune16 in a study on work-related disability from low back pain. They estimated the rate of back pain associated with temporary disability using as denominator the total number of employees in the public and private sectors in Norway. However, using the average monthly number of individual taxpayers as denominator may have slightly underestimated the rates as they were 33,333,012 and 36,177,021 in 2006 and 2007, a 7.9% difference.

Beneficiaries of disability pensions from back pain included permanent, temporary, contracted, self-employed workers, home workers, and elective and special categories of taxpayers, however, the latter three are not entitled to injury pension.

There were estimated working days lost due to disability among employed workers by industry according to the number of benefits by age for each category. We chose to restrict our estimates to employed workers as beneficiaries of the other categories might not have the same representativeness regarding working days lost. Also, as age in our data was not a continuous variable we used the median five-year interval for each age group plus 0.5 year. It was then subtracted from 65 (males) or 60 years (females), multiplied by the number of benefits for each age group studied and multiplied by 365.

The outcome disability pension from back pain was dichotomized into idiopathic back pain (M54 - dorsalgia) and back pain with pathological changes (M47 - spondylosis, M48.0 - spinal stenosis, M50 - cervical disc disorders, M51 - other intervertebral disc disorders) for the calculation of proportions. There were excluded inflammatory and infectious spondylopathies. The benefits were also stratified into disability (B32) and injury (B92) pensions.

The databases obtained were extracted into electronic datasheets and exported to R-project for statistical analysis.

Most pensioners were male aged 50-64 living in urban areas and had an income of up to three minimum wages. Among them, 33.3% were employed, 26.0% unemployed, 22.8% self-employed and 4.3% retired due to work-related injury.

The number of working days lost due to disability from back pain was greater than 12 million days. Most were commercial workers and they were beneficiaries of 97.0% of all benefits due to disability from back pain and, consequently, had the greatest numbers of working days lost. However, the highest number of days lost per beneficiary was found among cargo transport and railroad workers, but only one benefit was granted to railroad workers (Table 1). 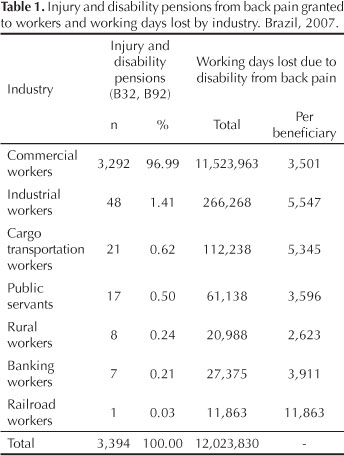 Out of all disability pensions from back pain, 6,200 (57.2%) were due to idiopathic causes. The most common conditions were dorsalgia (33.4%), low back pain with sciatica (29.0%), and low back pain (22.9%). Cervical pain was found in 7.2% of nonspecific cases. Among the pathological causes, 4,061 (88.0%) were intervertebral disc disorders associated to low back condition. Cervical disc disorders were seen in only 3.6% of specific cases. Idiopathic back pain was the leading cause of disability (Table 2) and injury (not shown in Table) pensions in Brazil in 2007. 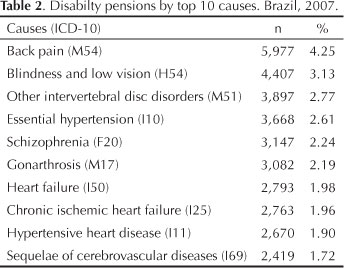 In all Brazilian macroregions and states pension rates were not correlated with the HDI (data not shown). Even after disregarding the outlier rate of Rondônia, the rate in the North region fell to 34.14 and was almost similar to that seen in the South, but still there was no correlation with the HDI.

Most disability pensions were from idiopathic back pain (57.2%) which corroborates the findings of other authors who suggested that only 5% to 10% of back pain cases have a defined cause.5,19 Although lower than that of idiopathic causes, the proportion of pathological causes was higher than that reported in other studies.5,19 One explanation would be that these other studies included the general population that is less likely to have back pain associated with pathological changes than disability pensioners.

Among the idiopathic conditions, complaints in the low back pain were the most common, which is a consensus in the literature.6 The rate of dorsalgia (M54) was high, which can be explained by ill-defined location of back pain during expert examination. It is likely that this category, without a subcategory, reflects the difficulty of identifying pain location or it even reflects there are more subcategories of idiopathic back pain in a single individual.

Intervertebral disc disorders (M51) were the most common condition among cases with pathological causes. These findings were expected because changes of intervertebral discs are common even in asymptomatic individuals.17

The number of working days lost per beneficiary suggests that back pain disability occurs at an earlier age in some industries, probably due to the physical demands of the related occupations. The estimate of working days lost included only days lost due to disability. But if there were included days lost due to temporary medical leave and disability benefits it would certainly increase even more this estimate. Despite these limitations, the study findings suggest that back pain is an extremely high economic burden in Brazil.

Regarding different rates found by gender, it is likely there is a greater proportion of women disabled from back pain who have not made sufficient social security contributions for retirement even though the normal retirement age is 60 among women.

A limitation of the present study is that there was missing information on denominators. Thus, we were not able to estimate the average monthly number of social security taxpayers in each industry by state and check whether workers in Rondônia are more vulnerable to disability from back pain or if there are proportionally more rural workers who are social security beneficiaries in this state. If the latter assumption is true, the high rate of disability pension from back pain in Rondônia could be explained by greater physical demands on rural workers who are therefore more likely to suffer from disabling back pain.

Also because of missing information we were not able to estimate age-standardized rates. However, even if the age distribution of social security taxpayers in Rondônia were different from other states, it could not explain the huge difference between the rates.

Another limitation of this study is that benefit granting depends on Ministry of Social Security policies and they may change from one administration to another. Besides, it is affected by expert examinations which can be quite inconsistent. The most recent guidelines of the Brazilian Medical Association for the diagnosis of low back pain and sciatica were published in 2001. Many studies on the diagnosis and prognosis of disability from low back pain and sciatica have been published since then and these guidelines need to be regularly updated. The development of specific guidelines for back pain can be a valuable support for medical experts working at the Social Security Administration.

According to Takahashi & Iguti,26 the Worker's Rehabilitation Program, a social security program designed to restore physical and psychosocial health of workers on disability benefits, was neglected in the 1990s. This program should be restructured based on current information. Moreover, the observed differences between the incidence rates by state stress the need for further studies to better understand the factors associated with this major disease burden among Brazilian workers.

15. Hagen KB, Tambs K, Bjerkedal T. A prospective cohort study of risk factors for disability retirement because of back pain in the general working population. Spine. 2002;27(16):1790-6.

Article based on Master's dissertation by Meziat Filho N submitted to the Institute of Social Medicine, Universidade do Estado do Rio de Janeiro in 2010.
The authors declare no conflicts of interests.