The study was aimed at estimating the prevalence of infection with and the genotype of hepatitis C virus (HCV), and to determine the extent of underreporting of HCV cases. A total of 115,386 pregnant women seen by the Program for Protection of Pregnancy [Programa Estadual de Proteção à Gestante] of the state of Mato Grosso do Sul, Central-Western Brazil, were tested for anti-HCV antibodies between 2005 and 2007. Prevalence of HCV infection was 1.07 cases per thousand. Positive samples were tested for HCV RNA and genotyped. Genotype 1 was detected in 73% of samples, genotype 3 in 24.3%, and genotype 2 in 2.7%. Underreporting of hepatitis C cases was 35.5%.

The hepatitis C virus (HCV) infects 130 million people worldwide, most of which become chronic carriers. Hepatitis C is an important public health problem: 50% to 80% of infections become chronic, which can lead to the later development of cirrhosis and hepatocellular carcinoma.1

HCV is divided into six genotypes (1-6) and multiple subtypes, with variable geographical distribution. Genotypes 1, 2, and 3 are spread throughout the entire world. Subtypes 1a, 1b, 2a, 2b, and 3a are found in Brazil, Western Europe, and the United States. In India, Bangladesh, and other parts of Asia, genotype 3 is most common. In Northern Africa and the Middle East, especially Egypt, genotype 4 is predominant. Genotypes 5 and 6 are found in specific geographical regions, such as South Africa and Asia, respectively.1,2

In Brazil, prevalence of HCV infection among pregnant women appears not to differ from that of the general population, ranging from 0.9% to 1.5%. Despite the relatively low risk of vertical transmission, the lack of specific prophylactic measures justifies routine screening of pregnant women for hepatitis C.3

The aim of the present study was to estimate the prevalence of HCV infection among pregnant women, to identify major viral genotypes and subtypes circulating in this population, and to estimate the degree of underreporting of hepatitis C.

We carried out a descriptive cross-sectional study including 115,386 pregnant women seen by the State Program for Protection of Pregnancy of the state of Mato Grosso do Sul, Central-Western Brazil, from January 2005 to December 2007. This number represents 97% of the pregnant women in Mato Grosso do Sul, based the number of live births registered in the same period. Subjects underwent their first serological test during antenatal care at the Instituto de Pesquisa, Ensino e Diagnóstico - Associação dos Pais e Amigos dos Excepcionais (IPED-APAE, Institute for Research, Education, and Diagnosis - Association of Parents and Friends of Children with Special Needs).

Subjects positive for anti-HCV in the IPED/APAE screening were compared to those notified in the database of the Sistema de Informação de Agravos de Notificação (SINAN, Notifiable Disease Surveillance System) as an attempt to estimate the degree of underreporting of hepatitis C cases.

Data were analyzed using EpiInfo 3.4.1 and SPSS 13.0 software. We used the chi-square test to compare calculated prevalences, assuming a significance level of p<0.05.

The study protocol was approved by the Ethics Committee for Research on Human Subjects of the Universidade Federal do Mato Grosso do Sul (CEP/UFMS protocol no. 488/2009).

Of all subjects tested, 124 were positive for anti-HCV, a prevalence rate of 1.07 cases per thousand (Table). Prevalence rates were distributed unevenly within the state, ranging from 0.45/1000 in the city of Nova Andradina to 6.25/1000 in the city of Novo Horizonte do Sul. The cities with the highest prevalences of anti-HCV were located in the center-south of the state, and all have populations of less than 10 thousand. 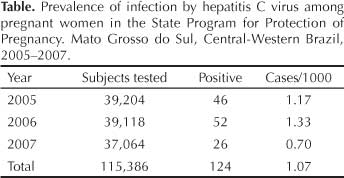 The majority of subjects positive for anti-HCV (53.2%) underwent antenatal screening in the first trimester of pregnancy, 28.22% did so in the second trimester, and 5.6% in the third trimester. This information was not available for 12.9% of cases.

The present study is the first epidemiological survey of HCV infection in pregnant women in the state of Mato Grosso do Sul to include viral genotyping. Global prevalence of the anti-HCV marker was 1.07 cases/1000, similar to estimates calculated for three municipalities of the state of Goiás (1.50 cases/1000).3 On the other hand, prevalence in the present study was lower to that found in subjects 19 years or older in a population-based survey of the Central-West Region (19.0 cases/1000).5

Similarly to a previous study carried out in the Central-West,3 prevalence of HCV in the present study increased with age, the highest prevalence being detected in the 40-49 years age group (2.79 cases/1000).

Genotyping revealed a predominance of genotype 1, followed by 3 and 2, and subtypes 1a (54.3%) and 3a (23.9%). These results are in agreement with the findings of studies of the geographical distribution of HCV genotypes in Brazil.2

Co-infection with HIV was observed in 2.5% of cases, which is lower than the worldwide prevalence of co-infection, which is as high as 6.5%.4

Prevalence of underreporting in our survey was of 35.5%. This indicates the presence of shortcomings in routine HCV surveillance, which hinder the development of measures aimed at controlling the disease.

The low prevalence (1.07 cases/1000) of HCV infection in the present study does not argue against the possibility of vertical transmission, and must therefore be monitored during routine antenatal care. Moreover, the high rate of underreporting of HCV suggests that the sensitivity of surveillance systems is low. Such deficiencies must be promptly corrected so as to improve the foundations of programs for the prevention and control of hepatitis C among pregnant women in the state of Mato Grosso do Sul.

Article based on the masters dissertation of Pinto CS, presented to the Universdade Federal do Mato Grosso do Sul in 2009.
The authors declare no conflict of interest.