The study aimed to determinate the maximum daily peak of Aedes aegypti oviposition in the city of Oran, northwestern Argentina. Biweekly samplings were taken between November 2006 and February 2007 (spring-summer). The city was divided into three areas (north, center, and south) and households were randomly selected. Two ovitraps were placed outdoors in the selected houses. Ovitraps were replaced every four hours, from morning (8 a.m.) to late afternoon (8 p.m.). The largest number of eggs was recorded between 4 p.m. and 8 p.m. (81%). These findings enhance our understanding of the vector and thus its control such as spraying during the hours of peak oviposition activity.

More than 2.5 billion people in tropical and subtropical regions of the world are at risk of dengue. Factors associated with the dissemination of dengue include geographic expansion and spread of dengue virus and its vector Aedes aegypti and rapid increase in vector populations resulting in a greater number of susceptible people, especially in areas favorable for breeding, among others.ª In the province of Salta, northwest Argentina, dengue cases are reported every year, especially in the northern towns of the province, where it is located the city of San Ramón de la Nueva Orán, near the border with Bolivia,b where this study was conducted.

For determining peak hours of daily Ae. aegypti oviposition activity samples were collected fortnightly between November 2006 and February 2007 (spring-summer). For operational procedures the city of Orán was divided into three areas (north, central and south) and 10 households were selected in each area with the use of a random number table. Two ovitraps were placed in the selected houses. Ovitraps were active for a day and replaced every four hours. Three timeslots were studied: T1, 8 am to 12 pm; T2, 12 pm to 4 pm; T3, 4 pm to 8 pm) (GMT time zone -3) covering from morning to sunset.

Ovitraps consisted of 350-mL plastic bottles (8 cm wide x 9 cm high) with a cylinder of brown filter paper inside. They were placed outdoors in the houses, in the shadow on the ground or at a maximum height of 50 cm. Both ovitraps in each house were placed close together (maximum distance of 50 cm between them). Each contained 250 mL of an infusion made from dried grass mashed together in a water vial for a week. This infusion is recommended by the World Health Organization (WHO) as it provides an olfactory stimulus that attracts gravid females to oviposit.c Each ovitrap was labeled with date, number and timeslot it was active.

Ovipositions were recorded in all sampling dates, although at different intensities depending on the timeslot. On December 7, 2006, there were eggs only in T3 (Figure), but eggs were collected in all three timeslots in the remaining dates. A total of 385 eggs were collected in T1, 524 eggs in T2, and 3,902 eggs in T3 (81% of all eggs collected). There were thus detected significant differences between timeslots (F = 5.65; gl = 2:18; p<0.05). 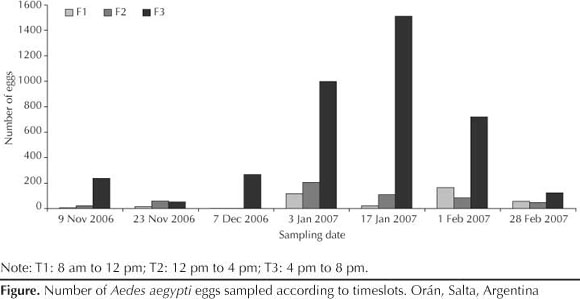 According to Nelson (1986),d both blood meal and oviposition by female mosquitoes occur mainly during daylight hours. Most activity occurs in the first hours after sunrise, mid-morning and sunset hours. However, Rodhain & Rosen3 (1997) reported that the biology of these mosquitoes can vary depending on specific local characteristics. In the present study In Orán, daily oviposition activity of Ae. aegypti showed a major peak between 4 pm and 8 pm. In a study1 conducted in Belo Horizonte, southeastern Brazil, during March 2002, oviposition activity was recorded every two hours from sunrise (5:15 am) to sunset and during the night. An increased activity was recorded during photophase (1:15 pm to 5:15 pm), while during scotophase an increased activity was observed during the first two hours of sunset (5:15 pm to 7:15 pm). Although sampling started at 5:15 am, oviposition activity was only observed at 7:15 am (2 hours after sunrise), and was minimal throughout the morning until 11:15 pm.1 These data are consistent with those reported in our study in Orán, where most activity was recorded in T3 that ended at 8 pm, i.e., half an hour after sunset (7:30 pm). Moreover, during the study in Orán, when sunrise was at 6:45 am, there was also minimal oviposition activity in the morning (8 am to 12 pm), similar to that reported in Belo Horizonte.