Breastfeeding among children of women workers

OBJECTIVE: To analyze employment benefits and factors associated with the maintenance of breastfeeding indexes among working mothers.
METHODS: The sample was constituted by 200 formal women workers who returned to work before the child had reached six months of life, in the city of Piracicaba (Southeastern Brazil). Among the participants, 100 mother-infant dyads received guidance and support for the practice of breastfeeding within an oral health prevention program, and the other 100 dyads were addressed in a child vaccination campaign. Multiple logistic regression analysis was carried out to identify variables related to weaning in the fourth month of life.
RESULTS: The majority of the participants were primiparous women who underwent cesarean section, initiated breastfeeding within four hours after birth and stayed with their child in the room. The following women had higher odds of stopping breastfeeding: mothers not participating in the incentive program (OR = 3.04 [95%CI 1.35;6.85]), mothers who did not have a 30-minute break during the working hours (OR = 4.10 [95%CI 1.81;9.26]), and mothers whose children used pacifiers (OR = 2.68 [95%CI 1.23;5.83]) or bottles (OR = 14.47 [95%CI 1.85;113.24].
CONCLUSIONS: The mothers who participated in the breastfeeding incentive group, who did not offer pacifiers and bottles to their babies and who had a break during the working hours stopped breastfeeding after the fourth month. Support and information on lactation management and on their rights guaranteed by law, together with the increase in the length of maternity leave, may play an important role in maintaining breastfeeding.

Maternal employment is one of the risk factors for discontinuing breastfeeding.10 A study conducted by Schwartz et al13 has shown that the mother's return to work was responsible for 58% of early weaning in Michigan and Nebraska (USA). Similar results have been found by Costa et al2 in studies conducted in the city of Belém (Northern Brazil), and by Dearden et al3 in four communities of Guatemala.

Legal provisions have been created to minimize the risk of reducing breastfeeding in the period of return to work. Article 7, paragraph XVIII of the Brazilian Federal Constitution of October 5, 1988, reads: "Maternity leave, without loss of job and salary, with duration of 120 days". The Consolidação das Leis Trabalhistas (CLT - Consolidation of Labor Laws) protects the breastfeeding mother, with special resting periods during the workday and description of adequate places for providing care for the infants.7,12

On September 9, 2008, the federal Law nº 11,770 was created. By granting tax incentives, this law stimulates companies to extend the maternity leave to six months. This law meets the recommendation of the WHO and of the Ministry of Health.c

Thus, the aim of this study was to analyze employment benefits and factors associated with the maintenance of breastfeeding indexes among working mothers.

This is a retrospective cohort study. the original cohort was outlined to be conducted in an oral health preventive program and during the day of a vaccination campaign (august 10) in the city of piracicaba (southeastern brazil), in the year of 2008. located in the state of são paulo, piracicaba occupies an area of 1,377 km2 and, according to the 2010 census,d it has 4,328 inhabitants younger than 12 months, which represents 1.18% of the city's overall population.

The sample of this study included only formal working mothers, who had formal jobs and who returned to work before the child had reached six months of life. At the moment of the study, the child was aged between six and ten months. Mothers who performed functions not regulated by the CLT1 were excluded, as they are not entitled to breastfeeding incentive benefits. Besides, the dyads that presented some health problem before and immediately after birth were excluded, as well as mothers who had twins, preterm babies (< 37 weeks) or babies with low birth weight (< 2,500 g).

The sample was constituted by 200 mother-infant dyads, of which 100 (Group A) received, from February to May 2008, guidance and support for the breastfeeding practice within an oral health early prevention program. Data collection in this population was carried out by means of interviews performed during the dyad's participation in the program. The other dyads (Group B) did not participate in this program and were approached in the child vaccination campaign, at four vaccination units that had been previously drawn.

The sample enabled power of the test (1-β) of 0.80 with level of significance α of 0.05 for an odds ratio of 2.0, probability of response of 28% and probability of success of 35%, calculated according to Demidenko.4,5

A structured interview script was used to collect information on the family's socioeconomic level, parents' age, marital status, number of children, type of delivery, variables related to peri- and postnatal periods, period of mother's return to work, distance between the workplace and the place where the child stayed, child's caregiver when the mother was absent and the conditions of the mother's employment.

Results were evaluated by means of descriptive analysis, of the statistical tests chi-square, Fisher's exact test and multiple logistic regression analysis through the stepwise forward procedure. Variables with p < 0.25 in the bivariate analysis were tested in the model, and those which adjusted to the model with p < 0.05 remained. All the analyses were carried out in the statistical program SAS 2008, version 9.2.

The concept of weaning used in the study follows the definition of the WHO, that is, when the offer of breast milk to the child is discontinued.ª

The study was carried out according to the Ethical Norms and Guidelines of Resolution 196/96 of the National Health Council of the Ministry of Health, and was approved by the Research Ethics Committee of Faculdade de Odontologia de Piracicaba - Unicamp (Protocol nº 073/2004).

The majority of the children had families of medium socioeconomic level, and fathers aged up to 30 years. Their mothers were aged up to 28 years, primiparous, lived with a partner, underwent cesarean section, started to breastfeed in less than four hours after birth and stayed with their baby in the room (Table 1). 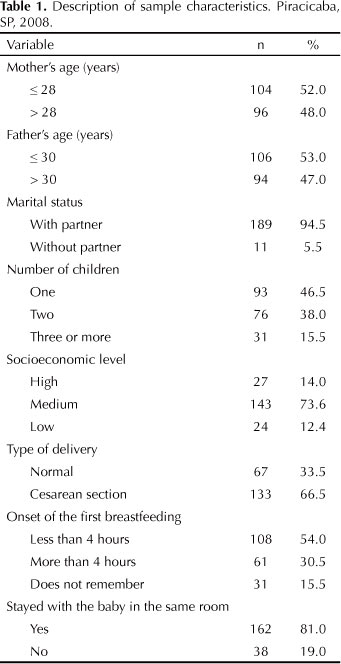 Some variables showed a significant relationship to weaning before the fourth month of life, such as the mother not being able to breastfeed the baby during the workday, not having the 30-minute break per shift and the use of pacifier and bottle. Hight-Laukaran et al6 have shown that the average time of breastfeeding is higher among women who stay with their babies in the workplace. Furthermore, Oliveira & Silva8 highlight that employers who respect the labor laws and facilitate breastfeeding at the workplace have more productive women workers with lower indexes of absences.

The most frequent period of return to work was between the third and fourth month after birth. This result was already expected, in view of the fact that the labor law that was in force at the moment of data collection entitled formal women workers to four months of paid maternity leave. There was a tendency of maintaining breastfeeding for more than four months among mothers who returned to work after the fifth month after birth. These data indicate that the law that extends the maternity leave from four to six months may contribute to increase the breastfeeding period. 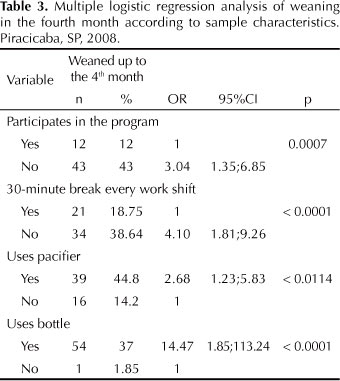 A study with women workers in the city of Campinas (Southeastern Brazil) who used the benefit of having a daycare center at the workplace showed an index of exclusive breastfeeding of 66% in the child's fifth month of life. Moreover, it was possible to observe that weaning began around the fifth month of life following the guidance provided by the daycare center, aiming at a better adaptation of the child to the institution's routine.9

The enforcement of laws that protect breastfeeding seems to be fundamental in a society like the Brazilian one, in which almost 25% of the economically active population is constituted by women with children younger than six months of age.6 According to Hight-Laukaran et al,6 92% of the women who do not receive the benefit of having a daycare center at the workplace introduce substitutes for breast milk.

The State of Santa Catarina obtained an index close to 85% in the enforcement of these laws by means of some strategies. Among them, the requirement of the registration of company-owned and external daycare centers at the Regional Labor Inspection Office, the company's obligatoriness to explain to women their rights and the way to use them, the modification in the type of inspection and control of daycare centers and companies, and the dissemination of working mothers' rights by the media.8

The mothers who participated in the breastfeeding incentive group and who did not offer pacifiers and bottles to their babies weaned them after the fourth month. These results corroborate the study by Osis et al,9 who observed that women breastfeed for a longer period of time when they receive some kind of support, either from the family or professional support. According to Roig et al,11 the use of bottles and pacifiers and the lack of information are related to the duration of breastfeeding.

The data of the present study show the importance of offering information to working mothers on the rights that are guaranteed by law and that facilitate the maintenance of breastfeeding. Having this knowledge, the woman-mother-feeder can fight for her rights, inspecting and demanding the enforcement of the employment benefits by the companies. However, it is necessary to offer, also, support and information on the handling of lactation, counseling the mother to, for example, avoid the introduction of artificial teats and to pump and store her milk so that it is offered to the child when she is absent. These initiatives, together with the extension of the length of the maternity leave, may play an important role in the maintenance of the breastfeeding practice.