OBJECTIVE: The objective of this study was to investigate the influence of oral habits and breastfeeding on the oral skills of children.
METHODS: Cross-sectional study evaluated the oral skills of 125 nine-month-old-children born at term, belonging to Macro-Midwest region of Rio Grande do Sul between August 2010 and March 2011. Variables included evaluating oral skills and information on breastfeeding and weaning. The results were analyzed using simple and multiple logistic regression.
RESULTS: Breastfeeding positively influenced the acquisition of oral skills sucking at nine months of age (OR 3.1, 95%CI 1.2;8.3) and using a pacifier had a negative effect (OR 0.1, 95%CI 0.03;0.6).
CONCLUSIONS: It was found that breastfeeding contributed to mature orofacial as it improved the ability of oral suction. Pacifier use was shown to affect the functioning of the stomatognathic system. This should be made clear to parents and the use of pacifiers during infancy should be avoided.

Developing adequate oral skills, defined as motor oral response during feeding, is fundamental to the child.18 Problems in moving the structures of functions of the stomatognathic system during breast feeding or when other food is offered may compromise not only development of the child's oral motor skills but also have serious repercussions on child nutrition.2,17

Breastfeeding is the focus of studies of multi-professional interest for their nutritional and immunological value and for stimulating physical contact between mother and child, which contributes to the child's biopsychosocial development.1,4 The intense muscular activity it provides promotes craniofacial development. This promotes proper lip closure in repose, stimulates physiological correction of mandibular retrognathia and correctly positions the tongue in the palatal region of the central incisors.5 These benefits explain why mothers are recommended to breastfeed exclusively during the first six months of life.6,19 After this period, it becomes necessary to gradually introduce complementary foods in order to meet the child's nutritional needs.12,17

Complementary foods should be given using a spoon, glass or cup for purees and liquids respectively.3,16,17 At first, the child will use a sucking motion with the cup, as it has grown used to doing previously but, as use is encouraged by the parents, the child will begin to acquire the ability to sip liquids. It masters the use of this utensil around the age of nine months.3,14 It is expected that children will acquire the ability to use a spoon around eight months, when they should be capable of removing food from it with their two lips.16 Although the onset of chewing movements occurs at around six months, the ability to chew with mandibular rotation and lateralization of the tongue is observed from 7-8 months.14

During its first year of life, the child is exposed to other utensils in addition to cups and spoons which do not have a nutritive function, such as pacifiers and teething rings. Healthy babies show the need to suck, which may be satisfied in a nutritive (breast or bottle feeding) and non-nutritive form (pacifiers and thumb sucking). Teething rings are usually given to the child to alleviate symptoms related to teething, which begins at around six months.15 Frequent expressions of the teething stage are irritability, increased dribbling, fever, diarrhea, reduced appetite, sleeping less, increased thumb and finger sucking and frequently placing the hand to the mouth and chewing on objects, among others.8,15

No studies on children's oral skills and related factors were found in the literature.

The aim of this study was to assess the influence oral habits (pacifiers, teething rings and other objects) and breastfeeding had on children's oral skills.

This was a transversal study with 125 nine-month-old children in the central region of the state of Rio Grande do Sul, Southern Brazil, between August 2010 and March 2011. The children were selected from public and private child care facilities and health care centers

Children born at full term, healthy and aged between eight months and one day and nine months and 29 days were included in the study. Neurological disorders, craniofacial deformities, genetic syndromes and sensory disorders (visual and auditory) were criteria for exclusion. The convenience sample had a 90% confidence level, with a statistical power of 80%, relative risk of 1.5 for the ratio of exposed/not exposed 1.1.

The variables for the study were obtained from the children's records (weight, length and gestational age at birth, Apgar score and current weight), from a questionnaire completed by the parents or guardians (with information on: breastfeeding, complementary feeding and oral habits (pacifiers, teething rings or other objects) and from a tool to assess oral skills. 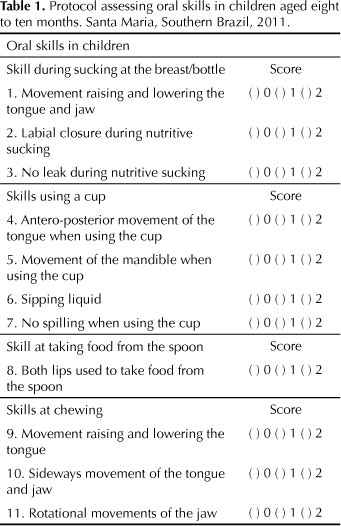 Simple and multiple logistic regression analysis was carried out in order to analyze the contribution of breastfeeding and oral habits (independent variables) for the presence of adequate oral skills (dependent variable). Variable with p < 0.20 in the simple analysis were included in the final model. P < 0.05 was considered to be a statistically significant difference. The data were inputted into Excel and analyzed using Stata 10 software.

Adequate oral skills for sucking were observed in 89.7% of the children who were breastfed and in 95.5% of those who did not a pacifier, with a statistically significant difference when compared with those who were not breastfed and those who used a pacifier (Table 2). Breastfeeding meant that the child's chance of having adequate oral skills for sucking increased by 3.1 times (OR = 3.1; 95%CI 1.2;8.3) in the simple logistic analysis. Using a pacifier was negatively associated (p < 0.01), decreasing the chance of developing this skill adequately (OR = 0.1; 95%CI 0.03;0.6).

The oral habit of introducing other objects into the mouth was shown to be positively associated (p < 0.02) with using a cup in the simple regression analysis, increasing the chance of the child demonstrating adequate oral skills by 6.6 times (OR = 6.6; 95%CI 1.3; 33.5) (Table 3).

Adequate oral skills for using a spoon and for chewing were not associated with breastfeeding or oral habits (Tables 4 and 5).

The results of the final model of the multiple logistic regression analysis are shown in table 5. For sucking, using a pacifier is the only variable which is included in the final model (p < 0.04), i.e. using a pacifier is negatively associated with oral skills for sucking. For using a cup, the oral habit of putting other objects in the mouth (p < 0.02) was positively associated (OR = 6.71; 95%CI 1.29;34.84) (Table 06).

Breastfeeding contributed positively to the development of oral skills for sucking, whereas using a pacifier negatively influenced these skills. The habit of putting objects in the mouth encouraged oral skills for using a cup.

Developing adequate oral skills in a child, in addition to the nutritional aspect being important, also plays an important part in acquiring speech. Eating habits, as well as other common habits developed during childhood, may affect the development of the stomatognathic system.7 Breastfeeding is primordial, as the intense muscular activity involved promotes adequate growth and craniofacial maturation.5,9,10,13 In this study, a higher percentage of adequate oral skills were observed in the group of children who had been breastfed.

In contrast, other oral habits frequently developed in childhood, especially in the first year, can compromise the child's motor-oral development and their breathing pattern and have a negative effect on the development of oral skills. This is the case with the pacifier, use of which during the first year may cause changes in the movement of the perioral muscles, mainly the tongue, altering its position in repose.7 Pacifiers may also be responsible for early weaning and contribute to the introduction of the bottle, which is associated with a lower number of sucks than the breast. This leads to less work for the perioral musculature, which compromises the motor-oral development of the face.1 The influence of the pacifier on the stomatognathic system, especially on the oral skill of sucking, was observed in this study. The habit of using a pacifier increases the risk of compromising the oral skill of sucking.

Using a cup and chewing skills were evaluated in relation to breastfeeding and the presence of oral habits.

The guidance given to parents is that cups should be introduced from around six months, at the start of weaning, initially to give water or fruit juice.b When the child first starts to use a cup it transfers the habit of sucking to this new utensil.14 When the liquid reaches the mouth, the child tries to stabilize the jaw, sticking out the tongue, before swallowing.18 At around nine months the child begins to have the ability to complete a sequence of up to three sips, move the cup away and interrupt the flow of liquid, in order to breathe. In this study the cup was introduced, on average, at four months and 8.8% of the children demonstrated adequate oral skills during its use. A similar result, showing less efficiency using the cup, was observed in children aged between six and nine months, compared to a group aged between 10 and 12 months.3 The oral habit of putting other objects in the mouth positively influenced, i.e., contributed to, adequate oral skills when using a cup. Bringing the hands to the mouth, for example, is present from the intra-uterine stage. Between the 17th and 20th week of pregnancy the fetus can be observed making hand to face movements and at around the 28th and 31st weeks more complex movements of finger sucking occur, although coordination only occurs at around the 34th or 35th week.11 At four months, when oral reflexes are inhibited, the child begins to put objects into its mouth, seeking to explore the oral cavity better.11 From six months, when teething starts, the tendency for the child to introduce objects and teething rings into the mouth can be observed. It is common for parents to give such objects with the aim of relieving the child's anxiety and irritability.15 These factors, and the oral habits which they lead to may eventually positively affect the acquisition of the oral skills necessary for their use. However, the findings of this study clearly show the need to clarify and disseminate to parents and carers the importance of introducing cup use into the child's feeding routine.

All of the children used a spoon and the majority were being fed solid food. These results are in agreement with Ministry of Health recommendations b that complementary food should begin to be introduced from the age of six months. Although the children assessed were using the spoon, 35% did not demonstrate adequate skills in its use.

Although breastfeeding is considered essential for good development of orofacial structures and functions, the multiple logistic regression analysis showed that the habit of using a pacifier was a variable associated (albeit negatively) with developing adequate oral skills for suction. This finding reinforces the idea that pacifiers alter the function of the stomatognathic system, signifying that this should be explained to parents along with the recommendation they not be used. At nine months, children do not have adequate oral skills to use cups, even though this period of emotional development corresponds to the oral stage, in which the habit of putting objects in the mouth is common. However, the presence of these habits contribute to developing the oral skill of using the cup. Families need to encourage their use more when starting to wean.