Official information on deaths and population in the city of Sao Paulo, 2003 to 2009, were used to estimate mortality rates from oral cancer (C00 to C10, International Classification of Diseases, 10th Revision), adjusted for age and stratified by gender (females and males) and race (blacks and whites). The Prais-Winsten auto-regression procedure was used to analyse the time series.

During the study period, 8,505 individuals living in the city of Sao Paulo died of oral cancer. Rates increased for females (rate of yearly increase = 4.4%, 95%CI 1.4;7.5), and levelled off for men, which represents an inversion of previous trends among genders in the city. Increases were identified for blacks, with a high rate of yearly increase of 9.1% (95%CI 5.5;12.9), and levelled off for whites. Oral cancer mortality in blacks almost doubled during the study period, and surpassed mortality in whites for almost all categories.

Mortality presented a higher increase among women than in men, and it doubled among backs. The surveillance of trends of oral cancer mortality across gender and racial groups may contribute to implementing socially appropriate health policies, which concurrently reduce the burden of disease and the attenuation of unfair, avoidable and unnecessary inequalities in health.

The highest prevalence of smoking in Brazil was detected in the South and Southeast regions, the most populous and developed portion of the country, where the city of Sao Paulo is located. Cancer register data shows that in Porto Alegre, Southern Brazil, between 2000 and 2004, 670 new cases occurred (ICD C00 to C10); and in Sao Paulo, between 2000 and 2005, for the same anatomic regions, 6,839 new cases were registered.bb Ministério da Saúde, Secretaria de Atenção à Saúde, Instituto Nacional de Câncer, Coordenação de Prevenção e Vigilância. Câncer no Brasil: dados dos registros de base populacional. Rio de Janeiro: INCA; 2010. v.4. Unsurprisingly, these two regions present the highest incidence of tumours that are closely related to tobacco consumption (oral, oesophagus and lung). In Sao Paulo, the prevalence of smoking among women increased until the late 1980s, and decreased thereafter, but at a lower rate than that observed among men.3232. Wünsch-Filho V, Mirra AP, López RVM, Antunes JFL. Tabagismo e câncer no Brasil: evidências e perspectivas. Rev Bras Epidemiol. 2010;13(2):175-87. DOI:10.1590/S1415-790X2010000200001.
https://doi.org/10.1590/S1415-790X201000... However, the previous increase of smoking prevalence among women may have continued to contribute to unfavourable cancer statistics in the long run. Indeed, an increasing mortality trend from lung cancer, another tobacco-related disease, was reported for women living in the city, from 1995 to 2003, whereas the trend was stationary for men.5

With more than 10 million inhabitants, Sao Paulo is the largest city in South America, and one of the largest metropolises worldwide. The city population was historically composed of y immigration by settlers from European countries, mainly Portugal, Spain and Italy, and by the forced immigration of slaves from African countries. According to official demographic information, whites account for more than two thirds (67%) of the city population, and blacks account for 30%. The remaining population comprises individuals from Asian (mostly Japanese) descent and a few indigenous descendants. Racial miscegenation is a prominent characteristic of the Brazilian population, and light-skinned blacks (nearly 85% of blacks in the city) markedly prevail in the black population.

Data on deaths occurring in the city were obtained from death certificates, which are systematically gathered by the official system of information on mortality. This information allowed the stratification of deaths by gender, age, race, year, place of residence and underlying cause. The study period is from 2003 to 2009, and all deaths of individuals living in the city were considered eligible for the study, irrespective of the place in which death occurred.

Inclusion criteria refer to deaths by oral cancer, as defined by the codes C00 to C10 of the International Classification of Diseases, 10th revision. Deaths were classified into five categories, according to the anatomic localization of the tumour: tongue, oropharynx (including the tonsils), salivary glands, oral cavity (lips, gum, palate, floor of the mouth, retromolar area, vestibule of the mouth and cheek mucosa), and unspecified parts of the mouth. The assessment of mortality considered each category separately and the overall assessment of oral (mouth and oropharynx) cancer.

The census performed in 2000 and the population count performed in 2007 allowed intercensal data, stratified by gender (females, males) and by racial groups (blacks, whites), could be assessed. These intercensal estimates were used to calculate yearly death rates according to gender and race. Gender-specific death rates were adjusted for age, and race-specific death rates were adjusted for gender and age. The adjustment of rates used the direct method, with the age distribution of the world standard population.dd Ahmad OE, Boschi-Pinto C, Lopez AD, Murray CJL, Lozano R, Inoue M. Age standardization of rates: a new WHO standard. Geneva: World Health Organization; 2001. (Global Program on Evidence Discussion Paper Series, 31). The resulting figures were expressed in terms of 100,000 inhabitants.

Information on race or skin colour was generated by two different methodologies. In death certificates, the physician that declares the cause of death is responsible for informing the race of the deceased (hetero-classification) as white, brown, black, yellow or indigenous. In the censuses, individuals are asked to report their own race (self-reported classification), from the same pre-selected five options.

The magnitudes and trends of death rates were assessed and compared between genders and between racial groups. Race was classified in two categories, blacks and whites. For operational reasons (sparse strata would not produce a sufficiently large number of deaths to allow disaggregated analyses), one single category included brown and black individuals, and yellows and indigenous were not considered in the assessment of race.

From 2003 to 2009, 8,505 individuals living in the city of Sao Paulo died of oral cancer. This figure includes 1,483 women and 7,022 men; three indigenous, 66 yellow, 1,127 brown, 524 black, 6,477 white, and 308 (corresponding to 3.6% of deaths) individuals without information on race in their death certificate. Figures 1 and 2 illustrate the overall and site-specific assessment of oral cancer mortality rates according to gender and racial groups. Mortality ranked higher in magnitude for men than for women in all comparisons throughout the study period. Mortality also ranked higher for whites than for blacks in all comparisons during the earlier years of the current assessment. However, blacks surpassed whites in mortality in almost all comparisons for the final years of the assessment.

With regards to the specific assessment by type of cancer and gender, increasing trends of mortality were acknowledged for women in the categories of oropharynx, tongue and oral cavity. The overall and site-specific assessment of mortality among men resulted in stationary trends, except for the category of unspecified parts of the mouth, which presented a slightly decreasing trend, at a yearly rate of -0.9% (95%CI -1.5;-0.4) (Table 1).

From 2003 to 2009, oral cancer mortality was on the increase for women and for blacks in Sao Paulo, although rates were stationary for men and whites. These results are the most relevant findings of the current study.

These reports converged to conclude that well-known risk factors for oral cancer are more prevalent in men than in women. This observation is consistent with the current observation that oral cancer mortality remained higher among men than among women throughout the study period. However, gender stratified information on previous patterns of exposure to tobacco smoking, alcohol drinking and dietary habits is absent; which prevents the appraisal of factors that may have contributed to the observation of discrepant trends of mortality among genders.

The discrepancy among trends for blacks and whites was so large, that blacks almost doubled mortality from oral cancer in the short term (2003-2009), while rates remained at almost the same magnitude for whites. We insist that the trend of oral cancer mortality among blacks, at such a high rate of yearly increase is indeed a public health problem, and poses challenges to the health system. Nationwide representative surveys conducted in Brazil recently reported differences in exposure to the main risk factors for oral cancer among women and men; unfortunately, these surveys have not considered assessing race as an analytical category.

The assessment of mortality from underlying causes may be biased by differences in case definition, incomplete ascertainment of death certificates, and differential access to care and diagnosis. Having exclusively assessed one single city for a relatively short period, this study may have not been affected by these sources of error. The main limitations of this study are the absence of information on race in 3.6% of deaths from oral cancer during the study period, and the use of two different frameworks to assess race; i.e., classification by health professionals in death certificates, and self-reported classification at the population level.77. Bastos JL, Peres MA, Peres KG, Dumith SC, Gigante DP. Socioeconomic differences between self- and interviewer-classification of color/race. Rev Saude Publica. 2008;42(2):324-34. DOI:10.1590/S0034-89102008005000005
https://doi.org/10.1590/S0034-8910200800... We also observe that studies in the Brazilian context concluded that self-reported race depends on racial features of the interviewer.88. Bastos JL, Dumith SC, Santos RV, Barros AJ, Del Duca GF, Gonçalves H, et al. Does the way I see you affect the way I see myself? Associations between interviewers' and interviewees' "color/race" in southern Brazil. Cad Saude Publica. 2009;25(10):2111-24. DOI:10.1590/S0102-311X2009001000003
https://doi.org/10.1590/S0102-311X200900... Sao Paulo has been reported to have a system of information on mortality as accurate as any other country with a long tradition in the area of health statistics,1717. Laurenti R, Mello-Jorge MHP, Gotlieb SLD. A confiabilidade dos dados de mortalidade e morbidade por doenças crônicas não-transmissíveis. Cienc Saude Coletiva. 2004;9(4):909-20. DOI:10.1590/S1413-81232004000400012
https://doi.org/10.1590/S1413-8123200400... and we are unaware of variations in the quality of death certificates by race in the short term. Nonetheless, we contend that racial classification is indeed a complex issue, and that this study used the best information on this issue that is available for health surveillance.

Statistically significant differences in mortality trends reflect differential patterns of exposure to risk factors and inequalities in access to health services. The most prominent risk factors of the disease (tobacco smoking and alcohol intake) are also considered to have prognostic relevance for the evolution of the disease, because patients that continue to smoke and/or to drink after the diagnosis of oral cancer reveal a lower commitment to treatment.1010. Biazevic MGH, Antunes JLF, Togni J, Andrade FP, Carvalho MB, Wünsch-Filho V. Survival and quality of life of patients with oral and oropharyngeal cancer at 1-year follow-up of tumor resection. J Appl Oral Sci. 2010;18(3):279-84. DOI:10.1590/S1678-77572010000300015
https://doi.org/10.1590/S1678-7757201000... The need for health interventions targeting inequalities in the outcome of oral health is made more urgent by the perception of how much and how rapidly these trends may impact on the mortality profile.

The main risk factors of oral cancer are shared by several other types of cancer and by other non-communicable diseases. There is an obvious need for more research on the differential exposure to tobacco smoking, alcohol drinking and poor dietary habits among gender and race strata in Brazil. The surveillance of disease and the monitoring of the main exposures may contribute to implementing socially appropriate health policies, which concurrently aim to reduce the overall burden of disease and the attenuation of unfair, avoidable and unnecessary inequalities in health. 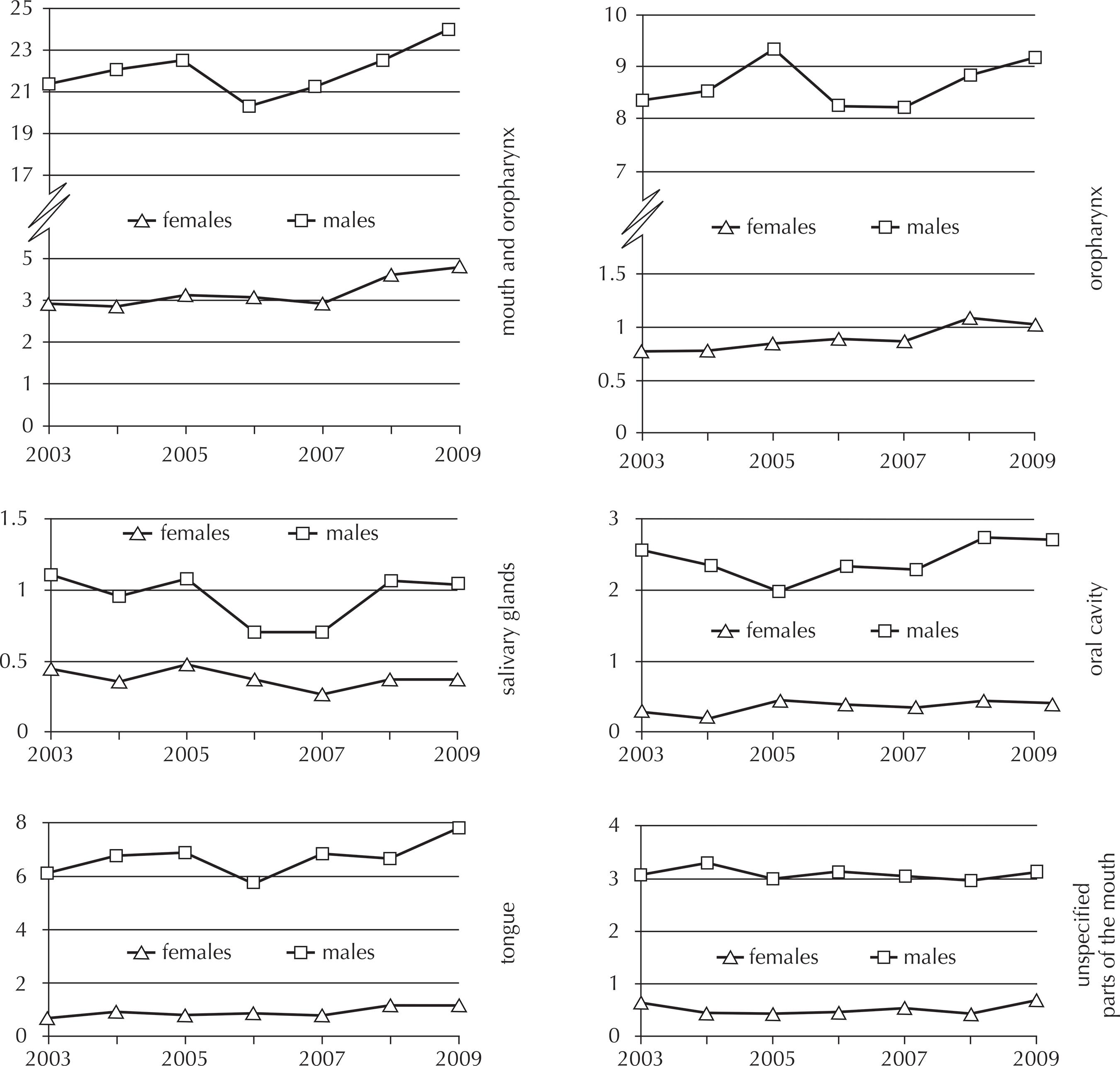 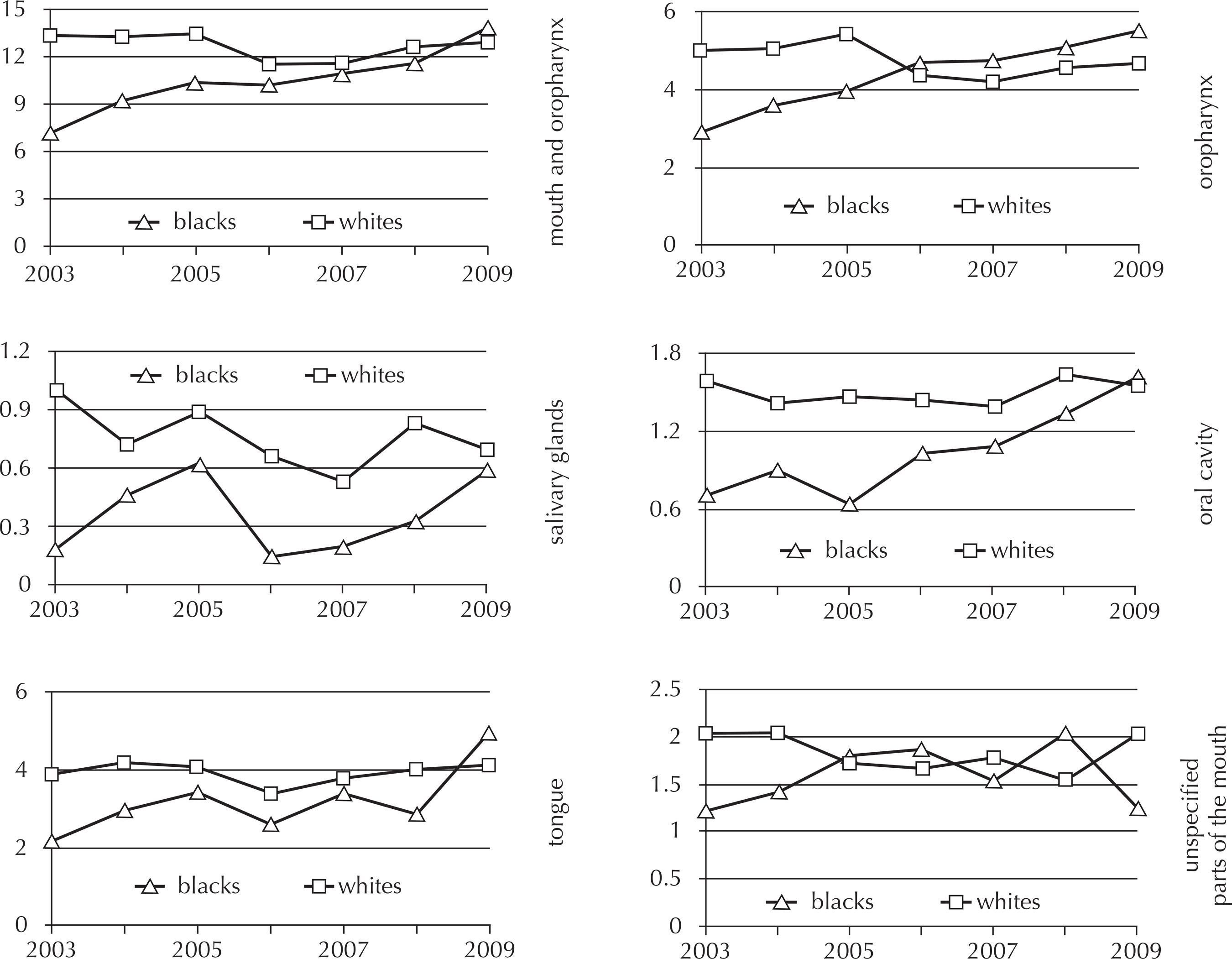