Air pollution and its impacts on health in Vitoria, Espirito Santo, Brazil

To analyze the impact of air pollution on respiratory and cardiovascular morbidity of children and adults in the city of Vitoria, state of Espirito Santo.

A study was carried out using time-series models via Poisson regression from hospitalization and pollutant data in Vitoria, ES, Southeastern Brazil, from 2001 to 2006. Fine particulate matter (PM10), sulfur dioxide (SO2), and ozone (O3) were tested as independent variables in simple and cumulative lags of up to five days. Temperature, humidity and variables indicating weekdays and city holidays were added as control variables in the models.

Respiratory diseases presented a stronger and more consistent relationship with the pollutants researched in Vitoria. A better dose-response relationship was observed when using cumulative lags in polynomial distributed lag models.

Vitoria is part of a geographical area of great urbanization called Greater Vitoria metropolitan area. It is the fourth most populous city of the Espirito Santo state (327,801 inhabitants in a 98 km2 area) according to data collected by the Brazilian Institute of Geography and Statistics (IBGE) in 2010. It is surrounded by a river island called Vitoria Bay. It has two ports that are a part of the largest port complex in Brazil (Port of Vitoria and Port of Tubarao). Since 2000, the city has had an Rede Automática de Monitoramento da Qualidade do Ar (RAMQAR – Automatic Air Quality Monitoring Network ). This RAMQAR has three stations (Figure 1) and measures the parameters of PM10, SO2, O3, CO, and hydrocarbons in the neighborhoods of Jardim Camburi, Enseada do Sua, and Vitoria Centroaa Instituto Estadual de Meio Ambiente e Recursos Hídricos. Relatório da qualidade do ar: Grande Vitória: 2013 [Internet]. Vitória (ES): Instituto Estadual de Meio Ambiente e Recursos Hídricos; 2013 [cited 2014 Sept 14]. Available from: http://www.meioambiente.es.gov.br/download/Relat%C3%B3rio_Anual_de_Qualidade_do_Ar_2013.pdf . Carapina station, located in a municipality close to Vitoria, monitors the meteorological parameters, in addition to measuring PM10.

Publications on the effects of air pollution in several Brazilian cities use different approaches, which has prevented comparisons between findings. Aiming at contributing to this comparison, the methodology used in this study was applied to various Brazilian cities that have air quality monitoring. This study aimed at estimating the risk of illness due to respiratory and cardiovascular diseases and its relation to air pollution in Vitoria.

Data of hospital admissions according to place of residence were obtained in the Hospital Information System (HIS) of DATASUS from 2001 to 2006 for the city of Vitoria, from an information website created for the Projeto de Avaliação de Impacto da Poluição do Ar nas Cidades Brasileiras (Air Pollution Impact in Brazilian Cities Assessment Project). The project aimed at measuring the impact of air pollution on health, using the same methodology for various locations, and exploring environmental monitoring models.

The website refers to the Autorizações de Internação Hospitalar (AIH – Hospital Admission Authorizations) systematized by the Department of Computer Science of the Brazilian Unified Health System (SUS), obtained from DATASUS. The bases were grouped per day, i.e., daily counts of hospital admissions due to the investigated causes: respiratory diseases (ICD10: J00-J99) at all ages (TRD), respiratory diseases (ICD10: J00-J99) in children under the age of five years (CRD), and cardiovascular diseases (ICD10: I00-I99) in adults over 39 years old (CVD), used as dependent variables in the models. The pollutant variables were grouped according to monitoring stations and meteorological variables in the same website. Meteorological and pollutant data from three monitoring stations in the city of Vitoria, provided by IEMA, were grouped in daily averages for PM10 and SO2, and the largest 8h-concentration for O3, minimizing losses in case the stations were considered individually. The bases were evaluated for information continuity, accepting losses of up to 15.0% of days in the period for each environmental variable. The concentration values of PM10, O3, and SO2 were used as exposure variables, and temperature and relative humidity as controls.

Using the data provided by the website as a source of information, a time-series analysis was performed with the ares library developed for the R applicationdd Junger WL. Análise, imputação de dados e interfaces computacionais em estudos de séries temporais epidemiológicas [thesis]. Rio de Janeiro (RJ): Universidade Estadual do Rio de Janeiro; 2008., using the same methodology applied in cities that have joined the project. For each participating municipality, explanatory models were created for the counts of hospital admissions due to causes studied over time. The proposed models are part of the class of Generalized Additive Models (GAM), with the option of Poisson regression. In this class of models, the average daily number of health events was described as the sum of functions of explanatory variables. The terms whose association with the outcome was linear, e.g., weekdays and holidays, were included in the model multiplied by a slope. Variables that were nonlinearly related to the outcome were included in the model by smooth functions, e.g., splines, according to the equation:

in which Yt and X1t are the numbers of morbid events and the level of a given pollutant on day t, respectively; Xit are the predictor variables, including time, and Si are the smoothing functions, using natural splines. When indicator variables for weekdays and national or local holidays were added, its significance was tested. Holidays with significance of up to 0.09 were grouped according to the direction of the effect: positive or negative. In the time-series modeling process, the aim was to minimize the Akaike Information Criterion (AIC) and optimize the Partial Autocorrelation Function (PACF).

After building the working model (Core Model) containing all control variables and checking their suitability, pollutants in lags of up to five days (simple lag) were added individually. The cumulative effect in that period was also analyzed from a polynomial distributed lag model. This model, in addition to considering the latency of the effect of pollutants, minimizes the instability in the estimation process, typical of analyses that use multiple lags1313. Schwartz J. The distributed lag between air pollution and daily deaths. Epidemiology. 2000;11(3):320-6..

We found a smaller number of child admissions, with an average of two per day due to respiratory diseases. Losses of meteorological and pollutant data were below 15.0% from January 2001 to December 2006, a limit established as acceptable for the period (Table 1).

Despite the characteristic seasonality of pollutants, annual PM10 averages remained constant and around 27 µg/m3 in the period. SO2 showed an increasing trend, with levels ranging from 5.87 µg/m3 in 2001 to 14.06 µg/m3 in 2006. Ozone data showed discontinuity between 2005 and 2006 because of problems in the monitoring station, not allowing trend observation (Figure 2).

Upon adding pollutants in simple lag in the models, a significant relationship was found for PM10 at lag 0 with %RR = 4.40 (95%CI 0.64-8.23) when analyzing TRD. A relationship was found at lag 2 for CRD: %RR = 2.55 (95%CI 0.08-5.08) also for O3. Cardiovascular diseases were not related to any of the pollutants studied in this lag structure. Table 2 presents %RR of the polynomial distributed lag model from zero to five days for increments of 10 µg/m3 in pollutant levels and their overall value. The overall value reached high levels in the period for hospital admissions due to total respiratory diseases and in children under the age of five years. CVD were related only to ozone.

Health outcomes presented a more robust and consistent relationship when considering the cumulative effects of pollutants from zero to five days in Vitoria. Hospital admissions due to total respiratory diseases and respiratory diseases in children under the age of five years were related to all researched pollutants, most strongly associated with PM10. Admissions due to cardiovascular diseases were associated only to variations in ozone levels. The results expressed in %RR indicate how much the average daily number of admissions increases for each increment of 10 µg/m3 of the pollutant.

The PM10 levels (27 µg/m3) in Vitoria from 2001 to 2006 remained below the annual average of 50 µg/m3 of the air quality standards proposed by the Brazilian National Environmental Council (CONAMA), and close to the 20 µg/m3 recommended by WHO guidelines. Nevertheless, the effect of air pollution was found on residents of Vitoria. This supports the WHO recommendation to always seek lower exposure levels for health protection, even in cities of little pollution, as the dose-response relationship is linear when the effects of air pollutants are analyzed without a safe dose44. Daniels MJ, Dominici F, Samet JM, Zeger SL Estimating particulate matter-mortality dose-response curves and threshold levels: an analysis of daily time-series for the 20 largest US cities. Am J Epidemiol. 2000;152(5):397-406. DOI:10.1093/aje/152.5.397,1616. World Health Organization (WHO). Air quality guidelines: global update 2005: report on a working group meeting; 2005 Oct. 18-20; Bonn, Germany. Copenhagen: World Health Organization; 2005.. Vitoria has a mixed exposure characteristic (industry and vehicles contribute to pollutant levels) and must have a PM10 composition different from other urban centers where vehicles predominate. To understand the effects of each type of exposure source, speciation studies on particulate matter are required, but this is not available in the location.

Although a period of more data completion was considered for the study, gaps in the information on ozone levels were noted. These gaps, although within tolerable limits according to the criteria established by the authors, are found on a single period of 2005, which may have influenced the results of the analysis of this pollutant.

The literature shows that effects on health continue to be detected even in low exposure to sulfur dioxide1515. Souza SL, Pires JC, Martins EM, Fortes JD, Alvim-Ferraz MC, Martins FG. Short-term effects of air pollution on respiratory morbidity at Rio de Janeiro – Part II: health assessment. Environ Int. 2012;43(1):1-5. DOI:10.1016/j.envint.2012.02.004. This should become a greater concern in Vitoria, as an increasing trend of this pollutant was observed in the studied period. This trend persisted, as noted in the Relatório Anual de Qualidade do Ar de Vitória de 2013 (2013 Annual Vitoria Air Quality Report), which analyzed the past 10 years.

The AIH information system does not represent the totality of hospitalizations in Brazil. It refers to services paid by the Brazilian Unified Health System and its coverage varies among states. The information system of the Comunicação de Internação Hospitalar (CIH – Hospital Admission Communications), which has a record of admissions in hospitals not covered by SUS, is available on DATASUS from 2008 on. The CIH accounted for 16.9% of hospitalizations in Vitoria in 2008. Estimating from this proportion, this study may have used more than 80.0% of the hospitalizations in the city. However, interpreting the results requires caution. They should be considered as the impact of air pollution on admissions recorded in hospitals related to by SUS.

Studies aimed at measuring the impact of pollution on health are a tool used by Health Surveillance technicians to discuss prevention and control activities with regulatory agencies or the judiciary66. Freitas CU, Campos RAG, Silva MAFR, Panachão MRI, Moraes JC, Waissmann W et al. Can live in the surroudings of a petrochemical complex be a risk factor for autoimmune thiroid disease? Environ Res. 2010;110(1):112-7. DOI:10.1016/j.envres.2009.10.009. On the one hand, the health sector has little legal power to require measures to correct the contamination of the environment. On the other, it has instruments that allow measuring the damage caused by this contamination in the population, although these are complex measurement techniques that are not always accessible to primary care services. 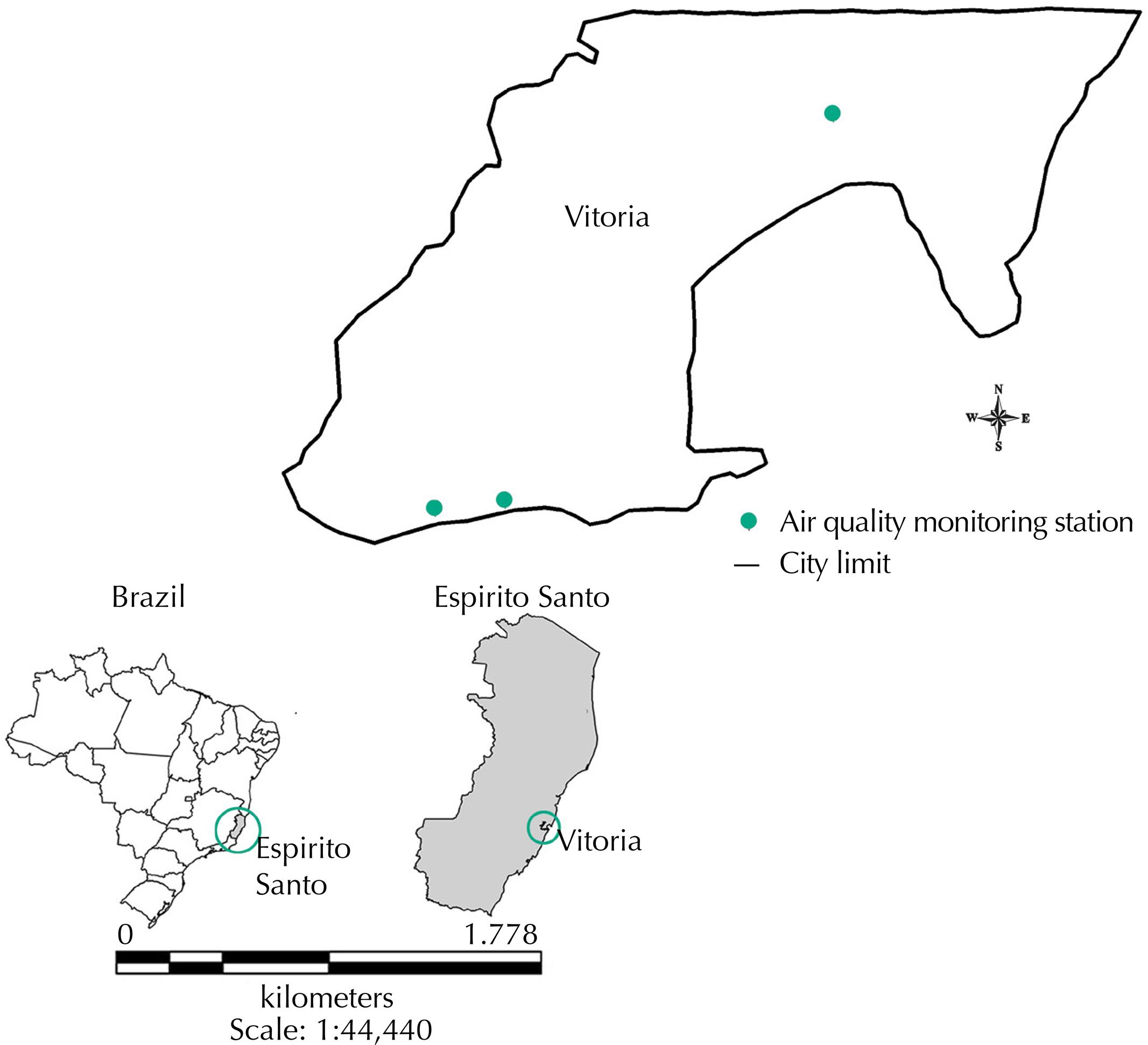 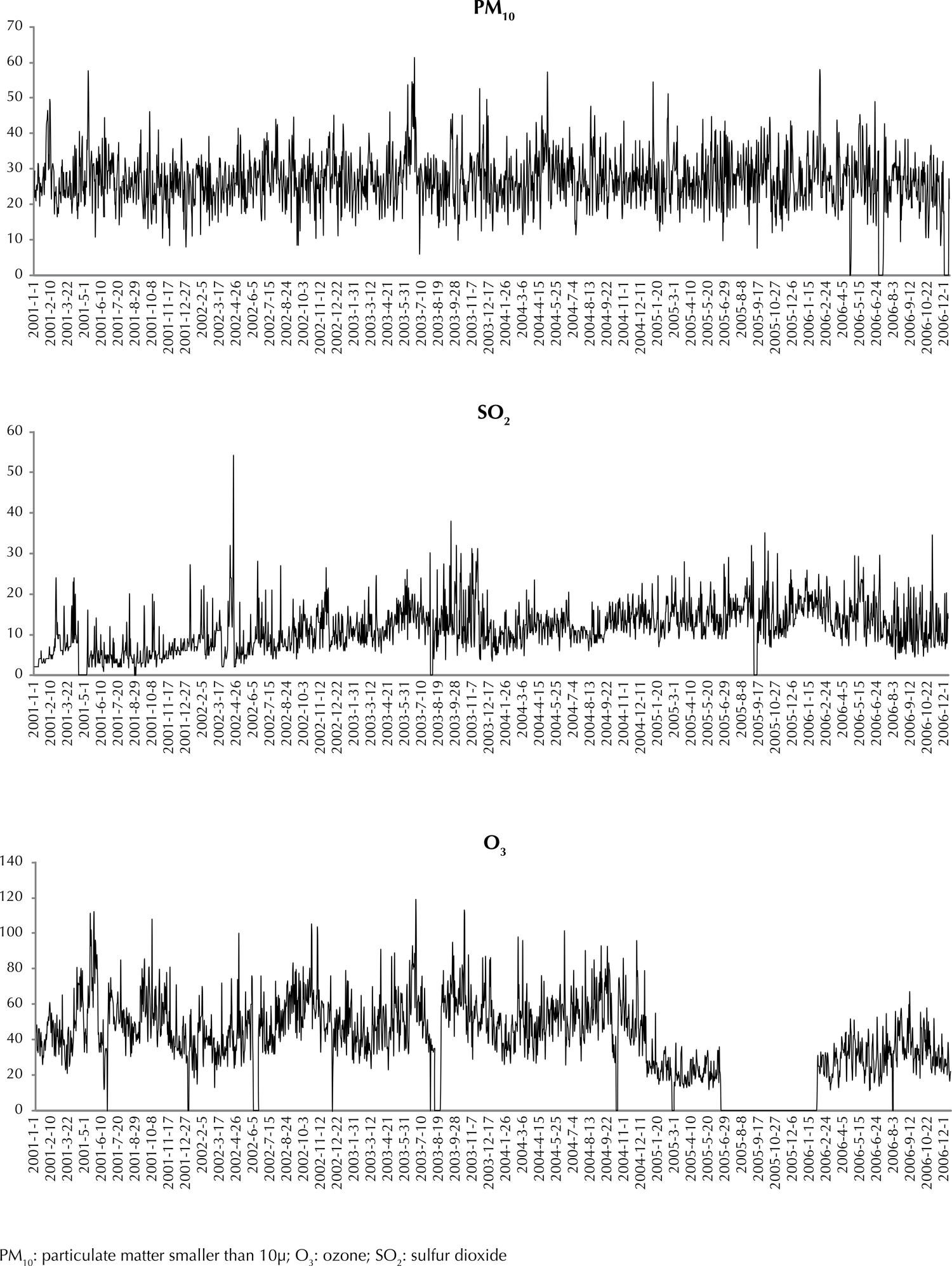