Cholesterol and prevention of atherosclerotic events: limits of a new frontier

Control of atherosclerotic cardiovascular disease – a highly prevalent condition and one of the main causes of mortality in Brazil and worldwide – is a recurrent subject of great interest for public health. Recently, three new guidelines on dyslipidemia and atherosclerosis prevention have been published. The close release of these important publications is a good opportunity for comparison: the Brazilian model has greater sensitivity, the English model does not work with risk stratification, and the American model may be overestimating the risk. This will allow reflection on current progress and identification of controversial aspects which still require further research and debate. It is also an opportunity to discuss issues related to early diagnosis and its efficiency as a preventive strategy for atherosclerotic disease: the transformation of risk into disease, the gradual reduction of cut-off points, the limitations of the screening strategy, and the problem of overdiagnosis.

The first attempt to overcome the single-factor view of atherosclerotic CVD risk was in New Zealand in 1993. But the major advance in the joint use of risk factors came in 1998 with the publication of an article by the Framingham Heart Study team. Thus, it was possible to estimate the absolute risk of developing coronary heart disease per decade of life according to gender and age, systolic blood pressure, total cholesterol, HDL-cholesterol, diagnosis of diabetes, and knowledge of smoking habits1212. Lotufo PA. O escore de risco de Framingham para as doenças cardiovasculares. Rev Med Sao Paulo. 2008;87(4):232-7..

The new guidelines recommend different therapeutic interventions, but they are all based on individual absolute risk, estimated from different multivariate statistical models of risk prediction. Our Table compares the main characteristics of each one of these guidelines. There are several aspects worth considering.

Thumbnail
Table
Summary of the main characteristics of new national and international guidelines for cholesterol and atherosclerotic disease.

A second aspect worth considering is the relationship between age and risk levels. It is known that absolute risk of atherosclerotic disease increases with age; on the other hand, the relative weight of the other risk factors in the composition of this absolute risk decreases. Individually, age can select the groups with the highest individual risk. Regarding coronary and cerebrovascular events, a cut-off point of 55 years could be used to identify 96% of future fatalities2323. Wald NJ, Law MR. Screening for future coronary heart disease. Chapter 41. In Coronary heart disease: from aetiology to public health. Oxford: Oxford University Press; 2005. p.706-13.. In other words, the impact of lowering LDL-cholesterol on the absolute risk reduction of an atherosclerotic event decreases with age.

In the three guidelines, absolute risk is presented in levels graded as low, medium and high. However, both the variables that make up the equations and the limits between each risk range differ between the guidelines. Therefore, the estimated risk and, consequently, the recommended intervention for a same person may differ according to the guideline chosen.

The Framingham Study has a long history of producing multivariable predictive risk models. The use of tables associating the occurrence of risk factors with the given score, which will result in a total score, stems from the observation of the weight each factor has in these equations. If, on the one hand, the resource contributes to operational ease, on the other it oversimplifies the multifactorial nature of atherosclerotic disease and may generate loss of information and precision in the results. In addition, the ethnic composition of the study population is quite different compared to the rest of the world and to Brazil in particular2222. Sullivan LM, Massaro JM, D’Agostino RB Sr. Presentation of multivariate data for clinical use: the Framingham Study risk score functions. Stat Med. 2004;23(10):1631-60. DOI:10.1002/sim.1742
https://doi.org/10.1002/sim.1742... .

The validity of using these risk scores can also be questioned. The assimilation of a predictive model for clinical practice requires the prior performance of four distinct evaluations. First, identification of the variables that will compose the model. Then, validation of the tool in the population where it was generated, when investigating its capacity to distinguish cases from non-cases. Next, validation in external populations, or calibration, when comparing calculated risks with observed risks. And, finally, analysis of the impact of the use of the tool in actual clinical practice11. Adams ST, Leveson SH. Clinical prediction rules. BMJ. 2012;344:d8312. DOI:10.1136/bmj.d8312
https://doi.org/10.1136/bmj.d8312... . In the case of the US guidelines, if on the one hand there was a concern with recommending only those interventions already evaluated in randomized clinical trials, on the other the same criterion was not applied in selecting the risk prediction model. Indeed, application of the Pooled Cohort Equation in the population of the Women’s Health Initiative, Women’s Health Study and the Physician’s Health Study indicated overestimation of cardiovascular risks, which reached more than 150%1717. Raymond C, Cho L, Rocco M, Hazen SL. New cholesterol guidelines: worth the wait?. Cleveland Clinic J Med. 2014;81(1):11-9. DOI:10.3949/ccjm.81a.13161.
https://doi.org/10.3949/ccjm.81a.13161.... .

These guidelines are not protocols for the treatment of dyslipidemias or atherosclerosis, but for the prevention of ischemic events resulting from atherothrombotic phenomena, based on control of serum cholesterol levels. Thus, it is relevant to go back to the conceptual basis of preventive medicine systematized by Leavell and Clark88. Leavell HR, Clark EG. Medicina preventiva. São Paulo (SP): McGraw-Hill do Brasil; 1976.. The natural history model proposed by the authors presents the process of illness in distinct phases. Initially, there is a phase of susceptibility, when exposure to risks and induction of disease occurs. Then the disease begins, but without manifest signs or symptoms, in a phase called subclinical, or latency period. The next step is symptomatic disease, also called the clinical phase. The idea of predisease originated from early 20th century oncology99. Levin I. Changes in tissue surrounding a growing tumor and the significance of the precancerous state. J Exp Med. 1912;16(2):149-54. DOI:10.1084/jem.16.2.149
https://doi.org/10.1084/jem.16.2.149... . The term prediabetes appeared in the medical literature around 194066. Jackson WP, Woolf N. The natural history of prediabetes. N Engl J Med. 1956;255(25):1183-5. DOI:10.1056/NEJM195612202552504
https://doi.org/10.1056/NEJM195612202552... ; prehypertension, in turn, is a more recent term, introduced in 200377. Kaplan RM, Ong M. Rationale and public health implications of changing CHD risk factor definitions. Annu Rev Public Health. 2007;28(1):321-44. DOI:10.1146/annurev.publhealth.28.021406.144141
https://doi.org/10.1146/annurev.publheal... . Thus, the predisease phase precedes the disease stage – including subclinical. That is, it concerns events that happen still in the induction period.

A predisease does not always progress to the next stage. Among people with prehypertension, 20% to 30% stabilize their blood pressure levels over time, without undergoing any intervention. Likewise, individuals with fasting blood glucose levels between 100 mg/dl and 110 mg/dl, conceptually in a prediabetes state, when monitored for up to 20 years did not present a higher risk than those of individuals with normal glycaemia for both the development of retinopathy, nephropathy or neuropathy and the occurrence of major cardiovascular events77. Kaplan RM, Ong M. Rationale and public health implications of changing CHD risk factor definitions. Annu Rev Public Health. 2007;28(1):321-44. DOI:10.1146/annurev.publhealth.28.021406.144141
https://doi.org/10.1146/annurev.publheal... .

Subclinical atherosclerosis comprises states ranging from initial reactions to risk exposure, especially endothelial dysfunction, to the presence of calcified, inflamed, and unstable atheromatous plaques (Figure). It makes epidemiological sense to observe that, in a causal chain, the more distal the exposure, the lower its strength of association with the outcome22. Bonita R, Beaglehole R, Kjellström T. Basic epidemiology. 2nd ed. Genebra: World Health Organization; 2006.. That is, the strength of association between exposure to hypercholesterolemia and acute myocardial infarction should be lower than that observed between the calcified atheromatous plaque and infarction.

Thumbnail
Figure
Sequence of events in the pathophysiology of atherosclerotic cardiovascular disease.

Thus, a question arises: at what point in the natural history of atherosclerosis will the detection of abnormalities decrease the likelihood of advanced disease or death? If early diagnosis of a disease in the clinical phase is always desired, the same may not be true regarding the previous phases of atherosclerotic disease. At least, not until randomized clinical trials have assessed the impact of therapeutic intervention based on the screening of each one of these stages of the pathophysiological chain and proven the effectiveness of this strategy.

There are two different prevention strategies: the modification of population risks and the modification of individual risks. The former stems from the observation that the variability of a given characteristic within a specific population – serum cholesterol, for example – tends to form a unimodal continuous distribution1414. Pickering GW. High blood pressure. London: Churchill Press; 1968.. The population prevention strategy aims to shift the whole distribution of risk frequency in a favorable direction. To this end, it is necessary to conduct interventions that modify the behavior of the whole society. It is a strategy with a longer reach in the causal chain and of more lasting effect1919. Rose G. The strategy of preventive medicine. Oxford: Oxford University Press; 1992..

The prevention strategy that focuses on high individual risk interferes with a smaller part of the total population and offers cost-effective interventions. It is narrow in scope, since it does not modify adverse behaviors or unjust social structures. It has a palliative, local and temporary effect and little capacity to reduce the population burden of disease1919. Rose G. The strategy of preventive medicine. Oxford: Oxford University Press; 1992..

Screening is a prevention strategy that seeks patients in an asymptomatic subpopulation with high individual risk to impose treatment that modifies the natural history of the disease1616. Raffle AE, Gray JAM. Screening : evidence and practice. Oxford: Oxford University Press; 2007. Chapter 4, Measuring what screening does; p.85-126.. The guidelines in question start out from this procedure, but once the risk is stratified, treatment is soon proposed. However, two steps are missing in this process: performance of screening and diagnostic tests. Proposing treatment for the entire high-risk group will inevitably increase the occurrence of false-positives and overdiagnosis.

The medical literature has modified the limits that define important diseases related to atherosclerosis, with great impact in the calculation of their prevalence. In the United States, the decrease in requirements regarding total serum cholesterol, from 240 mg/dl to 200 mg/dl, added 42,647,000 people to the patient group (+86%). For every 100 people diagnosed with dyslipidemia based on the new limits, 78 will never progress to the clinical phase of the disease. The diagnosis and treatment of this population group are called, respectively, overdiagnosis and overtreatment2424. Welch HG, Schwartz LM, Woloshin S. Overdiagnosed: making people sick in the pursuit of health. Massachusetts: Beacon Press Books; 2011..

However, it is not possible to differentiate individuals whose clinical situation will reach clinical significance from those who will never cross that border. It is possible to recognize overdiagnosis by comparing the incidence of clinical disease among screened and unscreened populations; by identifying subclinical disease during necropsy studies; and by the fact that there are poorly calibrated predictive models that overestimate morbidity and mortality2424. Welch HG, Schwartz LM, Woloshin S. Overdiagnosed: making people sick in the pursuit of health. Massachusetts: Beacon Press Books; 2011..

It is essential for Brazilian health researchers and practitioners to also debate the excesses involving asymptomatic individuals in the name of prevention, based on the belief – not necessarily always true – that the earlier the diagnosis, the better.

Thumbnail
Figure
Sequence of events in the pathophysiology of atherosclerotic cardiovascular disease.
Thumbnail
Table
Summary of the main characteristics of new national and international guidelines for cholesterol and atherosclerotic disease.

Figure   Sequence of events in the pathophysiology of atherosclerotic cardiovascular disease. 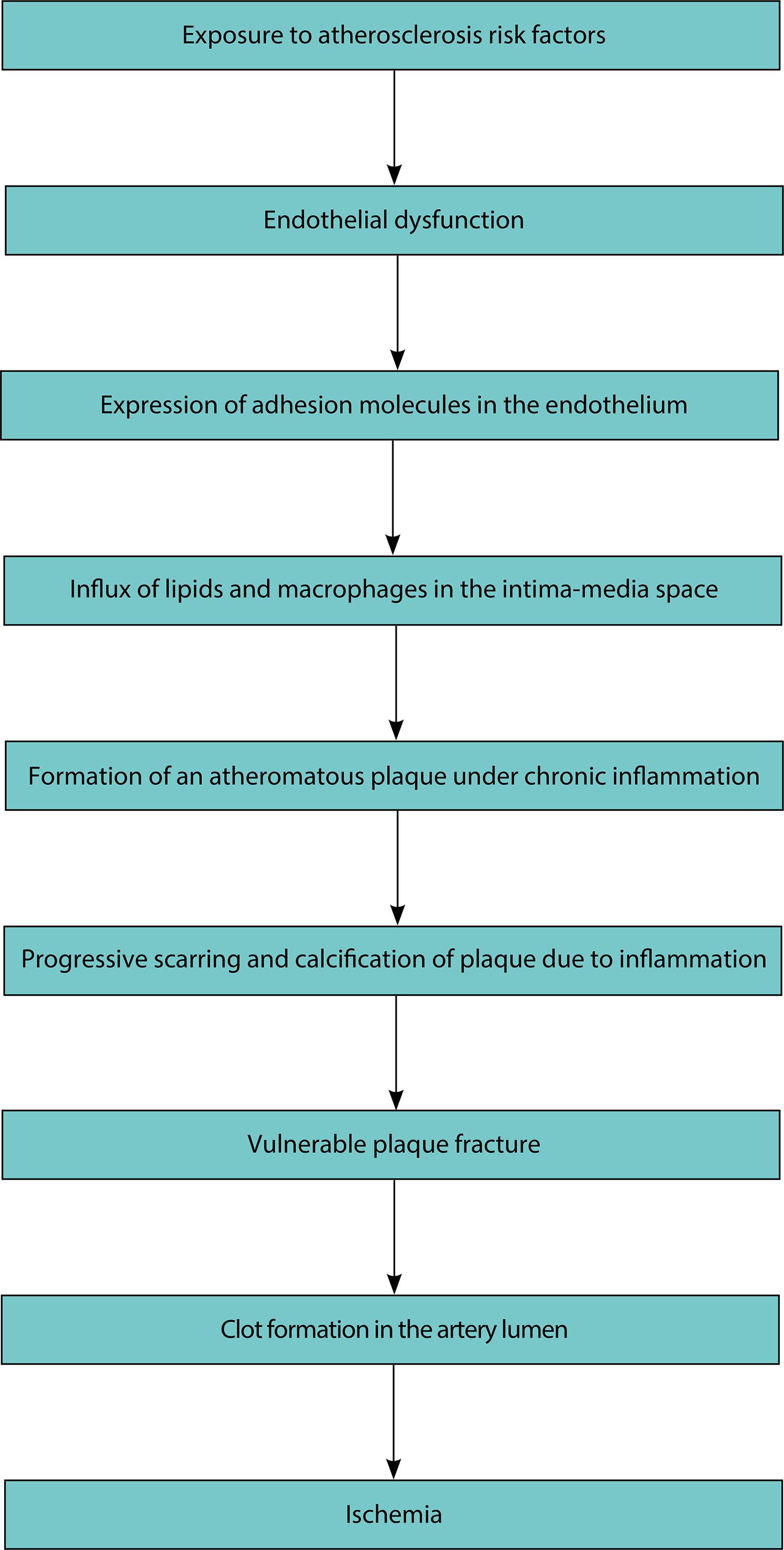 Table   Summary of the main characteristics of new national and international guidelines for cholesterol and atherosclerotic disease.