To analyze the emergency hospitalizations trend for ambulatory care sensitive conditions between 2011 and 2015 in a health insureance company of the Colombian Social Security General System.

A log-linear analysis based on age-adjusted hospitalization rates for ambulatory care sensitive conditions in the Entidad Promotora de Salud Sanitas was used to estimate the annual percentage change in these rates and to identify joinponts of the rates. Data was collected from administrative sources.

There were 38,530 hospitalizations for ambulatory care sensitive conditions in 26,501 Entidad Promotora de Salud Sanitas enrollees, with a significant decrease in hospitalization rates. The annual percentage change estimated for the period was -9.5% with no significant joinpoints throughout the time interval.

A significant reduction in hospital admissions due to ambulatory care sensitive conditions in Entidad Promotora de Salud Sanitas enrollees were reported for the last five years in this study.

The Entidad Promotora de Salud (EPS) Sanitas implemented a care model based on primary care units (PCU), which has a gatekeeping function and where activities of induced demand for maintenance of health and identification of specific risks are developed. Thus, programs for management of diseases such as hypertension, diabetes, chronic obstructive pulmonary disease and other conditions are implemented in the PCU, through which EPS carries out prevention, diagnosis, treatment, rehabilitation and follow-up in the insured population 33. E.P.S. Sanitas. Unidades de Atención Primaria (UAP) y Centros Médicos Bogotá: Organización Sanitas Internacional; 2015 [cited 2016 Aug 31]. Available from: http://portal.colsanitas.com/portal/web/eps-sanitas/unidades-de-atencion-primaria
http://portal.colsanitas.com/portal/web/... .

In Colombia, the information related to ACSC hospitalizaitions is limited. Therefore, this study aims to determine the trend of the hospitalization incidence by these conditions among enrollees of a health insurer from the Colombian Social Security General System (SSGS).

A study on the incidence of hospitalizations by ACSC was carried out analyzing a retrospective cohort study by EPS Sanitas enrollees between 2011 and 2015. During this period, this EPS covered 8.5% of the total insured population covered by the contributory regime of the SSGS. This population was located in regions such as Bogotá, Barranquilla, Bucaramanga, Cali, Medellín, and Central East Region. Economically active EPS Sanitas enrollees and their families belong to the contributory regime. Hospitalizations were identified based on the medical record performed by the Audit Department of this EPS. This record includes information generated by the hospital network of EPS Sanitas . During hospitalization, patients are followed daily or every other day by the Audit Department, which registers variables such as age, sex, type of admission (elective versus emergency), principal diagnosis, length of stay, and discharge status (alive versus dead). The hospitalizations selected corresponded to emergency admissions whose main causes of admission were acute ACSC (urinary infection, cellulitis, gangrene, pelvic inflammatory disease, dehydration, malnutrition, gastric ulcer, gastroenteritis, ear, nose and throat infections) or chronic ACSC (Chronic Obstructive Pulmonary Disease (COPD), asthma, Congestive Heart Failure (CHF), diabetes, epilepsy, high blood pressure and anemia), proposed by Bardsley et al. 77. Bardsley M, Blunt I, Davies S, Dixon J. Is secondary preventive care improving? Observational study of 10-year trends in emergency admissions for conditions amenable to ambulatory care. BMJ Open. 2013;3(1). https://doi.org/10.1136/bmjopen-2012-002007
https://doi.org/10.1136/bmjopen-2012-002... Additional to the original ICD 10 codes list, other codes related to the ACSC were added, since they were identified as commonly used in the diagnostic classification process in our context ( Box ). All readmissions, occurring within 30 days after a previous hospitalization, were excluded from this analysis. These admissions were considered not related to healthcare quality delivered in primary care.

A descriptive analysis of the data was performed. Quantitative variables were summarized using measures of central tendency and dispersion, while qualitative variables were described by absolute and relative frequencies. To determine the frequencies of hospitalization, the rates were calculated as the proportion (cumulative incidence) of hospital discharges for EPS Sanitas enrollees by year. Rates were stratified by age groups, and by type of ACSC (acute versus chronic). In order to analyze the trend of hospitalizations, a log-linear model was used based on age-adjusted rates according to the type of ACSC, and for each of the conditions in Box . This method also allowed to estimate the annual percentage change (APC) of these rates. The standard population used in the standardization of age rates was the Colombian census population of 2005. The rates were adjusted by age, since during the study period the composition of the insured population of EPS Sanitas changed by age. It included younger people in the most recent years analyzed. There were not changes in sex distribution during the study period, so the analysis adjusted by sex was similar to the one presented. The descriptive analysis was carried out using Stata 13. Trend analysis was conducted using Joinpoint Regression Program 4.3.10. The p-value of the statistical significance used for the whole analysis was ≤ 0.05.

The analysis of hospitalizations according to ACSC type and age groups showed that the rates were highest in children under one year of age, followed by those over 74 years when the rates were about acute conditions, while among chronic ACSC, rates were higher in older groups. In contrast, lower rates of hospitalization were seen in children older than five years and in young adults for both acute and chronic conditions ( Figure ).

This study quantified the frequency of hospitalization for ACSC in the insurer’s enrollees of the Colombian SSGS during a five-year period. While younger patients were predominantly hospitalized for acute conditions, older adults were admitted for chronic causes. Although both acute and chronic ACSC hospitalizations presented downward trends, the latter did so in greater magnitude. In addition, more chronic conditions than acute had a significant decrease in the trend of hospitalization, in which only the chronic group had conditions with significant points of change in hospitalization rates between 2011 and 2015.

In our study, the observed decrease in the trend of hospitalization for ACSC, especially for chronic conditions, may be due to several factors, including the performance of Entidad Promotora de Salud Sanitas within the Colombian SSGS, the socioeconomic characteristics of its enrollees, as well as the strategy of primary care implemented in its PCU to strengthen the risk management of its users. In Colombia, previous analyses of the performance of SSGS’s insurers have shown that this EPS has presented higher scores when compared to other insurers of the contributory regime 2121. Ministerio de Salud y Protección Social (CO). Ordenamiento por desempeño EPS 2015. Bogotá: Oficina de Calidad del Ministerio de Salud y Protección Social; 2015 [cited 2016 Aug 31]. Available from: https://www.minsalud.gov.co/sites/rid/Lists/BibliotecaDigital/RIDE/DE/CA/ordenamiento-eps-2015.pdf
https://www.minsalud.gov.co/sites/rid/Li... ,2222. SISPRO Sistema Integral de Información de la Protección Social. Observatorio Nacional de Seguimiento a Actores del SGSSS - ONSAS. Bogotá: Ministerio de Salud y Protección Social; 2016 [cited 2016 Aug 31]. Available from: http://www.sispro.gov.co/pages/Observatorios/ONSAS.aspx
http://www.sispro.gov.co/pages/Observato... . Among the interventions adopted by EPS at the level of primary care, there is more investment in technological and human resources in its PCU in recent years, better identification and follow-up of high-risk patients, as well as an integrated model of care based on primary care as a gatekeeper to health services 33. E.P.S. Sanitas. Unidades de Atención Primaria (UAP) y Centros Médicos Bogotá: Organización Sanitas Internacional; 2015 [cited 2016 Aug 31]. Available from: http://portal.colsanitas.com/portal/web/eps-sanitas/unidades-de-atencion-primaria
http://portal.colsanitas.com/portal/web/... .

Within the limitations of this study, it is to be expected that diagnostic classification errors could have occurred during the medical coding process, without any evidence that might indicate this has occurred differently between the conditions analyzed or over time. Likewise, the comparability of our results in the local context was difficult because of the limited number of published studies of this type in Colombia, as well as differences in the populations chosen. In one of them, the authors analyzed hospitalizations by ACSC in only five public hospitals serving the population of the subsidized SSGS regime 2323. Cáliz Peña O. Hospitalizaciones prevenibles por condiciones sensibles al cuidado ambulatorio en cinco hospitales de la red pública de Bogotá 2006-2008. Rev Esc Adm Neg. 2009;(67):95-106. .

On the other hand, the magnitude of the variability in the patients included according to age was not evaluated, therefore, it’s possible that biases related to the socioeconomic and sanitary profile of the study population were inserted. Additionally, only emergency admissions were used, excluding elective admissions, which may have generated data collection bias by classification.

In conclusion, to our knowledge the results of this study constitute the first analysis of hospitalization for ACSC performed by an insurer in Colombia. The rates obtained represent an indirect performance indicator of the Sanitas EPS in primary care, observing a significant reduction in hospital admissions for ACSC in the last years. At the same time, the observed rates will allow the decision-making process in EPS to be guided by actions and policies necessary to reduce hospitalizations for those ACSC that, by their frequency or trend, still constitute an opportunity to improve primary healthcare performance.

Figure   Hospitalization rates by age group according to ACSC type. 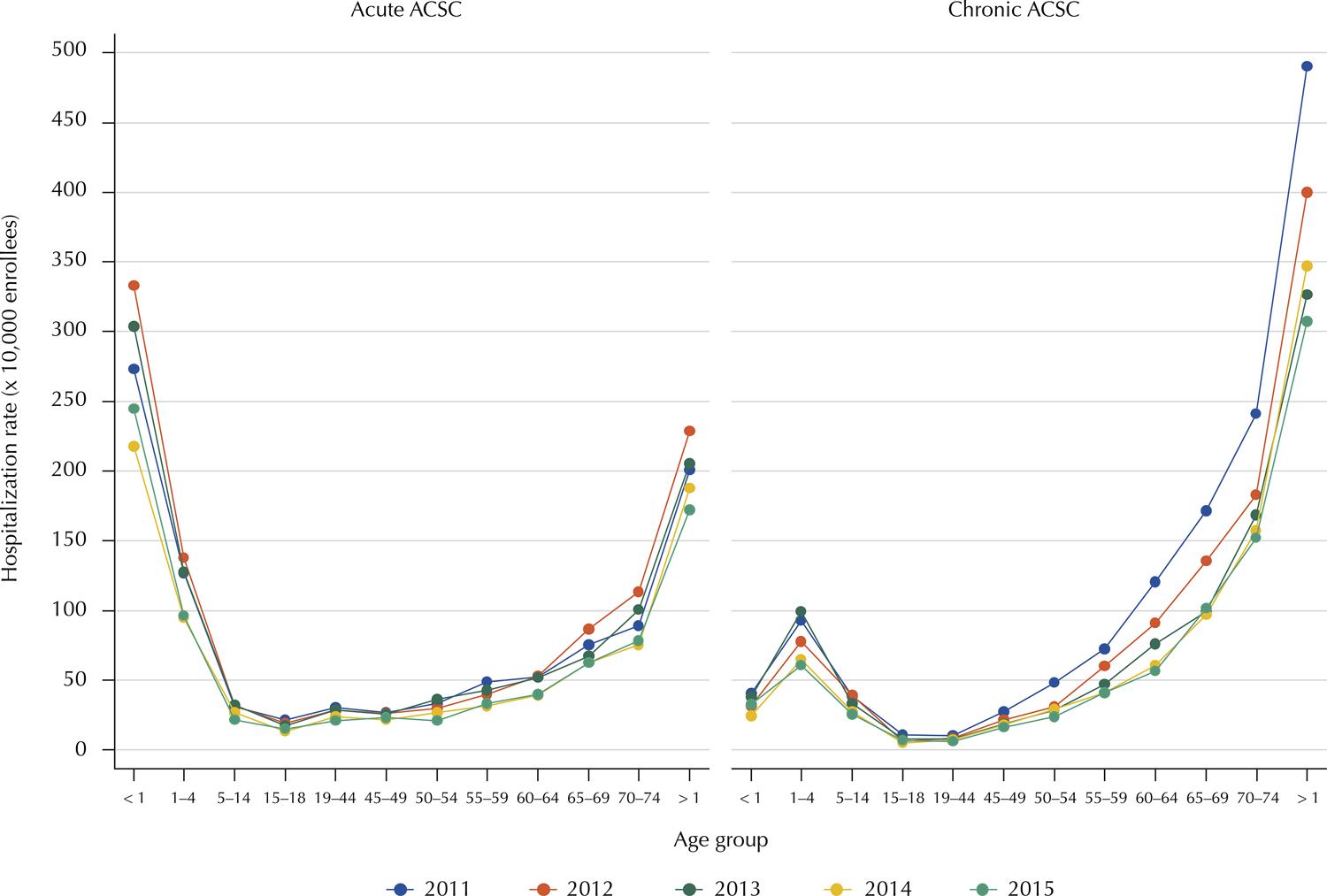