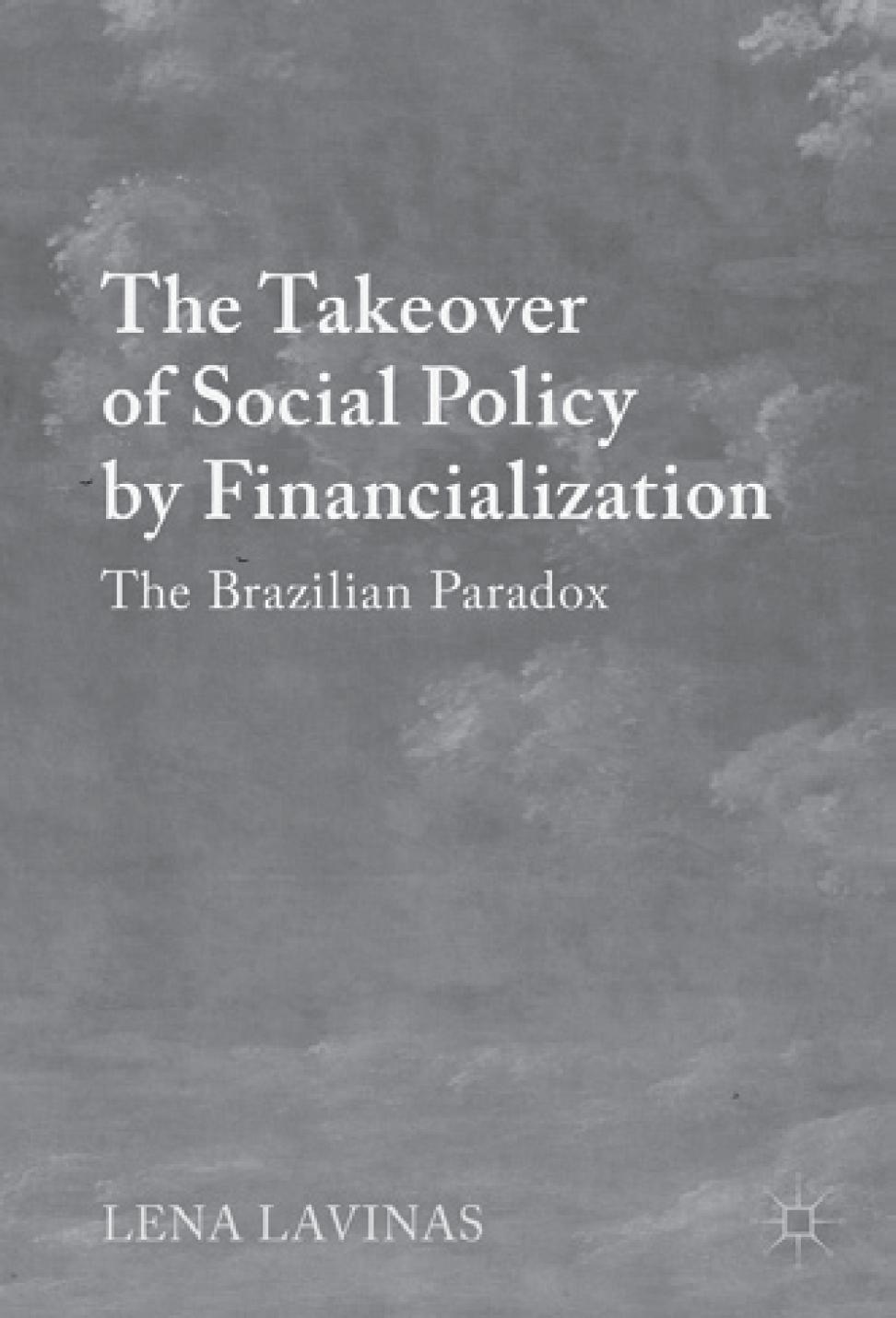 Neoliberalism has been a reality all over the world, in fact, for several decades. It is very closely associated with the process of accentuation of economic globalization that has been occurring in the same period. This, in turn, is linked to an unprecedented expansion, penetrating all domains of the social life, of the finance capital. The circle comes full with, in practice, neoliberalism joining the operations of finance capital, as economic policy and justification. This goes beyond, however, since, all together, imply a form of construction of subjectivity that penetrates to its stomach. Brazil is experiencing this visibly and, after the rise of Michel Temer, through shady means, to the Presidency of the Republic, in 2016, the prospect is a deepening of this process. Has it, actually, begun there?

That is what the recent book of Lena Lavinas, 'The takeover of social policy by financialization: the brazilian paradox'11 Lavinas L. The takeover of social policy by financialization: the brazilian paradox. New York: Palgrave Macmillan; 2017., is about. She examines the governments of the Workers' Party and shows us that this financialization of the economy and the advance of global neoliberalism among us did not stop during this period, quite contrary. If the process began with the crisis of the 1980s and had, in the governments of Fernando Henrique Cardoso, a strong deepening, Luiz Inácio Lula da Silva and Dilma Rousseff had entered even more this path. In fact, it is a very severe evaluation of the project - even though, especially, of the results - of the 'social developmentalism' applied in the period, which aimed at building a mass market as a lever for the brazilian development. According to the author, the project has failed and its problematic results are now visible. This was due, in part, to the policies of those governments themselves, which privileged the privatization and financialization of their activities and public policies. It was due, partly, however, to the lack of currentness of this economic policy, pending the developmentalism of the mid-20th century, with which it was unable to boost industry and saw consumption take place, above all, by means of increase in imports.

Lavinas studies in details the sociological aspects of the question (for example, the 'new middle classes') and, from the point of view of her specialty, particularly the economic and social policies that were implemented in those years. She deals with economic development in general, and visits education, health, the Bolsa Família program, other social benefits such as unemployment insurance and the Benefit of Continuing Provision, positively emphasizing the increase in the minimum wage. This is one of the few aspects, however, of government policy to deserve her praise - and even there, she points out that this increase was not accompanied by an increase in labor productivity.

As for the rest of the social policies of the Lula and Dilma governments, she underlines how financialization and, in addition, focalization - whose counterpart is the withdrawal, in practice, of the universal nature of public services, in scope and/or quality - predominated, opposing, thus, to policies for the expansion of citizenship as such. This is the social world of neoliberalism, at the same time that the great private conglomerates advanced on all these services, interspersing them with the explosion of the debt of individuals and families in front of the machine of the finance capital, if only for the simple expansion of the banking system, just like advocated by the World Bank as an element of (sic) 'democratization of credit'.

The expansion of the internal market, and even the more intense maintenance of part of the population in its bosom, has hit this limit, in addition to the expansion of low-quality and remunerated jobs. Obviously, when the global economic crisis unfolded, it has worsened and the measures used - especially by Rousseff, but not only by her, as well as by Lula, previously, also - to cope with it, led to a situation even more problematic. This had its most negative aspect in the massive and infamous tax exemptions - which would, supposedly, lead to new investments - hitting directly the financing of social policies, particularly social security - and, at the turn of the president elected in her second term, towards a gross fiscal adjustment -, configuring it clear electoral larceny (which, one must add, has destroyed her base of support in her own electorate).

The text of Lavinas is extremely clear and well written, with a narrative and analysis of each of the policies on which she leans over, with a temporal sequence and general evaluation very well-articulated and well-founded. Not because of that, it is less controversial. Certainly, not everyone will agree with her perspectives; some will grapple - publicly or quietly - with her arguments. Exactly because of this, in a country that has stopped discussing for a long time, it is a fundamental contribution to bring us back to the debate. With regard to the health area, it is worth mentioning that the author makes a consistent analysis of the Unified Health System (SUS) and the advancement of private plans, as well as several other aspects of economic and social policy that relate more indirectly to it.

With the defeat suffered by the left in recent years - and, also, because of its lack of attention and willingness to combat neoliberalism and the financialization of the economy and life in general, before that -, an effort is under way to deepen these aspects of brazilian public policies and social life. It faces difficulties in the Michel Temer government, in certain respects, although in others it is visibly victorious (and not only with regard to the very high interest rates, on a global basis, that the state pays on its public debt, or on labor reform). It is necessary to reinvent development and resume social policy, as opposed, actually, to financialization, so that we can change our route, without illusions about inflections that do not change the foundations of the processes that we have been living for decades. Creating a new kind of solidarity and making Brazil capable of fully addressing the challenges of the 21st century are urgent tasks, including for renewing democracy. Lena Lavinas sets us on the right track to get there.