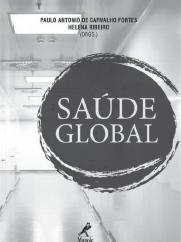 The publication of the book 'Saúde global' ('Global Health'), organized by Paulo Antônio de Carvalho Fortes and Helena Ribeiro11 Fortes PAC, Ribeiro H, organizadores. Saúde global. Barueri: Manole; 2014., contributes to the consolidation of the global health field in the scenario of deconstruction of panoramas. It is a milestone for the Faculty of Public Health of the University of São Paulo, and represents an achievement for the academic teaching staff and students of the institution, mainly for the postgraduate program of the Doctorate in Global Health and Sustainability, increasing the political dimension of all programs in this area. Moreover, the publication of this work contributes to the construction of identity in Latin America and to studies and research to adopt this cultural look that crosses the borders and permeates the new world order.

At the beginning of the first chapter, global health is conceptualized as a field of its own scientific knowledge, which uses a multidisciplinary and interdisciplinary approach, with pillars in teaching, research and practice contextualized in an extramural territory. It is an important global agenda for sustainable development and training of human resources for health.

Through a detailed and rich timeline, which covers international conferences, major wars and conflicts, as well as the relationship between regionalized and national interest agendas, the authors point to the theme of international health and, subsequently, highlight the process through which there was the deconstruction of this field aiming at the stoning of global health. The term carries with it a new strategic approach with global interdependence, with the participation of new actors and agendas in the globalization scenario. Among the topics presented that make up the field of global health are health diplomacy, global health governance, international cooperation, social and environmental sustainability, new sociodemographic profiles, among others.

The second chapter addresses the scenario of new international actors that contribute to the construction of global health as a field of knowledge, with different contexts of practice and learning. It describes how these institutions play an important role when facing epidemics and planning actions focused on integrating the global agenda. It also helps the reader understand the role of these institutions and their importance to the global health field by driving topics of the agendas and innovating in solving or facing new or old challenges. Global health leadership is a highlight and function of some agencies, such as the United Nations, the World Health Organization office or even the historic Rockefeller Foundation.

In the third chapter the theme of environmental health is intimately presented, one of the fields of the Doctorate of Global Health and Sustainability of the institution. Written by the current coordinator of the doctoral program, the geographer and teacher Dr. Helena Ribeiro, the chapter brings important contributions to the care of the planet in a responsible way; among the themes are the environmental imbalances, such as climate change and the destruction caused by wars, making the reader think about man's action in protecting or destroying the planet. The important reflection is made that transformations in nature are felt throughout the planet, with greater or lesser impact, and that we are all affected.

One of the challenges mentioned in the book is interdisciplinarity as a way of achieving intersectoriality and solidarity of knowledge for the sake of something common: the global health of the most vulnerable populations. Another theme emerging in the global scenario and of great importance for the analysis of this global health context is health safety. Thus, the fourth chapter addresses the theme, intertwining the concepts of health safety and risk with that of global health. This is done through the description of this new scenario of change in the epidemiological profile of the population, as well as the emergence of new ways of thinking about the binomials health and risk, safety and insecurity, both from the perspective of the individual and the population before the emergence of new diseases. It is worth highlighting the important role of health surveillance in this scenario by incorporating strategies, norms and knowledge aimed at reducing risks and injuries, changing the look from a local aspect to a global view and thus building the field of health security and its challenges; debate needed for present days.

The fifth chapter aligned the concepts cited from an operational perspective, contextualizing, in practice, their implementation in health services and systems, which will need to be prepared for this new scenario. It also addresses the analysis of living and health conditions, the look at real needs in defining policies and services for the population. From the new scenario, it is pointed out the need for new services, skills and competences. Therefore, the health model necessarily runs through the social rights insurance model, an intersectoral approach in the organization of services. The historical rescue in this chapter links industrialization and the concept of development to models of health services throughout history, which contributes to our understanding of modern typologies and arrangements. Furthermore, the authors list the crises experienced over the years and how they played an important role in transforming societal models, often with reduced funding, rights and the portfolio of services offered.

The sixth chapter, which discusses the reason for migrating in the contemporary, condenses a discussion about how humans have been occupying this space in conformation, how their actions and their movement on this planet also characterize a population in constant change. The verb migrate takes form and shape amidst the different motives for migration, either through cultural and economic globalization, or by seeking insertion in a world that thinks itself better or more peaceful, even facing war, famine and armed conflict. These population movements enhance the union of borders and cultures, but also strengthen access barriers from the perspective of national security.

Relations between countries, the new conformation of space and the occupation of territory have led to new pacts and international cooperation. To our relief, however, the seventh chapter discusses how such cooperation can help in extra-border relations, which are invisible lines between countries and populations that sometimes compete, sometimes cooperate. The choice for south-south cooperation in the book already points to a counter-hegemonic approach to building international agreements and, as previously mentioned, contributed to the building of regional blocks identity. Looking at the geopolitical framework makes it possible to reorient international cooperation policies, taking into account their needs and development scopes respecting specificities. He closes the book by contextualizing global health on the international scene, but with a local look at regions with similar characteristics or interests. It is the practice of global negotiation, of cooperation as a way of uniting countries for the benefit of their people. South-south cooperation is perhaps the concrete example of equity in global health, an important reflection throughout reading.

The reading of this work is located in the current context and allows to strengthen the discussion of social determinants of health in the face of social, environmental, health and safety inequalities, connecting the topics through the discussion that global health can contribute to the guarantee of rights.