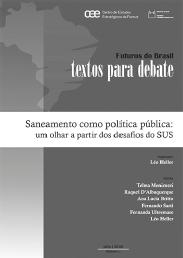 In recent years, there have been numerous proposals to restructure institutional arrangements for Water and Sewerage (W&S) service provision in Brazil. The main rationale for reform has been that the public administration cannot offer the resources or efficiency needed to universalise coverage. The solution proposed is to replace the public authorities by private agents in delivering water supply and sewerage services.

The chief merit of the collection ‘Saneamento como política pública: um olhar a partir dos desafios do SUS’11 Heller L. Saneamento como política pública: um olhar a partir dos desafios do SUS. Rio de Janeiro: Fiocruz; 2018. [Sanitation policy in view of the challenges facing Brazil’s national health system] is that it offers a comprehensive overview of the situation in the sector, one substantively at odds with mainstream, market-oriented formulations22 Azevedo PF, Toneto Jr R, Saiani CCS. Diagnóstico e Propostas para o Setor de Saneamento. In: Giambiagi F, Almeida Jr MF, organizadores. Rio de Janeiro: Elsevier; 2017. p. 313-327.. The organiser opens the book by reiterating the need to establish access to sanitation as a right and thus as integral to the agenda of a social welfare State. Unfortunately, the collection does not address the challenges of solid waste management or rainwater drainage, which also fall within the sanitation sector and impact populations’ conditions of life and health. This lacuna notwithstanding, the articles do not shy from addressing the core issues of the W&S sector or from exposure to controversy.

The study by Menicucci & D’Albuquerque, ‘Política de saneamento vis-á-vis á política de saúde: encontros, desencontros e seus efeitos’ [Sanitation policy and health policy: convergences, divergences and their effects], proposes a dialogue between sanitation policy and health policy. The ambitious goal of bridging for dialogue between two public policies with quite distinctive trajectories might have been made more achievable had priority been given to explaining the health sector’s contemporary contradictions. The emphasis the chapter places on describing the emergence of the health sector reform jeopardises an understanding of the fragmentation characteristic of the sector’s trajectory down to the present day. The literature now recognises that this fragmentation has favoured the proliferation of particularist business, professional and trade union arenas and interest groups, which have undermined the health sector reform’s universalist agenda. That is, the development of public-private relations in the health sector does not warrant the idea that the sector has not been severely and adversely affected by market preferences, as has occurred in the sanitation sector.

Public sanitation policy, meanwhile, is treated on a descriptive approach, resulting in an interesting overall and current panorama of service provision in the sector. However, opting for description means that the barriers imposed on the W&S sector by Brazil’s federative pact and constitutional rules are not considered in the detail or depth appropriate to an aspect prominent in all disputes over service provision in the country.

Lastly, it is to be noted that the article endorses the controversial thesis that business logic predominates in the management of Brazil’s public enterprises, but does not present the economic and financial indicators that would enable readers unfamiliar with the subject to understand the author’s argument better. The notion of path dependence is also used in the article by Menicucci & D’Albuquerque to explain the vetoes of moves to innovate away from the pathways trodden previously by W&S services. In recent years, the intellectual field engaged in investigating sanitation in Brazil has embraced the argument that the paralysis affecting sector decision making can be attributed in part to the state enterprises’ veto power. However, it should be stressed that the pioneering work that identifies the role of path dependence in the Brazilian W&S sector frames the role of state-level interests in the veto function temporally and in terms of clearly delimited regulatory initiatives33 Sousa ACA. Política de Saneamento no Brasil: atores, instituições e interesses [tese]. Rio de Janeiro: Escola Nacional de Saúde Pública Sergio Arouca, Fundação Oswaldo Cruz; 2011. p. 98.. In the present context, the changes in the sector’s institutional matrix following the Basic Sanitation Law (Law No. 11.445 of 2007) and the experiences with local management require that the path dependence thesis be deployed more cautiously, preferably from analytical angles other than merely that of veto power.

Aligned with the previous article, the chapter by AL Britto, ‘Proposições para Acelerar o Avanço da Política de Saneamento no Brasil’ [Proposals to expedite sanitation policy in Brazil], identifies important barriers to universal access in Brazil and situates the viewpoints of the main players in public sanitation policy. The chapter offers a lively balance of interventions by the various actors in the sanitation decision-making arena while the Partido dos Trabalhadores [Workers Party] was in government (2003-2016).

The article could have gained in substance had references been given for the sources underpinning many of the author’s statements and assumptions. Another key issue addressed in this chapter is the experience of Europe and the United States in service universalisation. Britto argues that services could be universalised in advanced economies, because access to sanitation was stipulated to be social right. Her article argues that, in Brazil, the inconstant flow of funding to the W&S sector has constituted a structural barrier to universalisation. However, it does not discuss the reasons why important government initiatives that assured sector funding for several years – the Programa de Aceleração do Crescimento [Accelerated Growth Programme], for example – failed to produce the expected results.

The issue of revenue generation in the W&S sector is considered in the chapter ‘Padrão de investimento e a estratégia financeira das grandes empresas regionais de água e esgoto no Brasil’ [Investment patterns and financial strategies of the major regional water and sewerage enterprises in Brazil], by Sarti & Ultremare. They examine financial indicators for four large, publicly-traded W&S enterprises of four states – São Paulo (Companhia de Saneamento Básico do Estado de São Paulo – Sabesp), Paraná (Companhia de Saneamento do Paraná – Sanepar), Minas Gerais (Companhia de Saneamento de Minas Gerais – Copasa) and Santa Catarina (Companhia Catarinense de Águas e Saneamento – Casan) – which accounted for half the investments in the sector and one third of its total revenue between 2000 and 2014. Their economic and financial analysis demonstrates that these were more profitable than other large, publicly-traded companies in the non-financial sector.

They also show that, by going public and imposing governance mechanisms that imitate those of the private sector, this cluster of companies did not produce results substantially different from the other enterprises in universalising coverage, because their opting preferentially to remunerate shareholders constrained decisions on investment in expanding coverage. It is here that the chapter’s strong point – and that of the collection overall – resides: it shows that adopting private governance mechanisms does not produce extraordinary results in universalisation or in reducing the deficit in service provision.

By alerting to the constraints imposed on universalisation when W&S enterprises submit to the logic of financialisation, the contributors refute the arguments in favour of service privatisation as a solution to the problem of universalisation and inspire future performance studies of other state-level enterprises, which constitute the majority of providers. Lastly, it remains to congratulate the Oswaldo Cruz Foundation (Fiocruz)/Centro de Estudos Estratégicos [Strategic Studies Centre] for the initiative of publishing this book on what is an absolutely essential theme in the public health field.