Spirometric nomograms for normal children and adolescents in Puerto Rico

ABSTRACT
Objective. The use of spirometric reference values specific to the population being tested is preferable. A study carried out in Puerto Rico is used here to develop nomograms for normal children and adolescents based on age and height, two variables that have been found to be good predictors of pulmonary function. Material and methods. The data for healthy individuals aged 5 to 18 were extracted (108 girls and 107 boys) from a larger study of spirometric measurements collected on 4 527 individuals attending medical services in Puerto Rico. Several models were tested for the prediction of FEV1, FVC and the ratio FEV1/FVC. The best models were selected for each gender, and nomograms were developed showing the fifth, twenty-fifth, fiftieth, seventy-fifth, and ninety-fifth percentile of the predicted values according to age and height separately. Results. The best models were those using the logarithm of the pulmonary function and the cube of height (R2= 0.79-0.81), and age without transformation (R2= 0.73-0.77). Corresponding nomograms were developed based on these models. The ratio showed little variation for different ages and heights. Conclusions. Pulmonary function can be efficiently predicted by age and height. Nomograms provide a simple way to use spirometric references that can be incorporated to clinical practice.
KEY WORDS: spirometry; children; adolescence; Puerto Rico

Several studies have suggested the existence of differences in pulmonary function in diverse populations due to race and ethnic origin.1,6 Therefore, standard values developed for one population might not be suitable for another. Their use out of context could lead to errors in diagnosis and in classification of impairment. This leads to the preference, when possible, of the use of race-specific standards.

A study carried out in Puerto Rico, which measured pulmonary function as well as height and age, provided a suitable set of data for the development of standard values for this population. Puerto Rico is one of the greater Antilles islands of the Caribbean Sea, with an area of roughly 3 500 km2 and a population of approximately 3.8 million. Puerto Ricans are racially a mixture of Caucasian (Spanish), African black and indigenous Carib and Arawak people. Pulmonary function reference standards are not available for them.

It is the purpose of this paper to develop spirometry predictive equations based on age and height of Puerto Rican children and adolescents which will also provide physicians with a simple way to assess abnormality in the development of pulmonary function. Therefore, we created a set of nomograms that can be easily incorporated into a routine medical check.

The data used in this paper are a subset from a larger study of spirometric measurements collected on 4 527 individuals during a period of 9 years, from February 1973 to May 1981. The subjects in this study were people attending public medical services in seven communities of Puerto Rico. These communities were chosen to represent the three main geographical zones of Puerto Rico: north coast, central mountain range, and south coast.

For the present study, the data for individuals aged 5 to 18 years were extracted, and healthy normal individuals were selected therefrom. Healthy individuals were defined as those who did not smoke and who did not show, at the time of the examination, symptoms that could be related to some respiratory illness. These included nasal itching, nasal congestion, runny nose, dry throat, hoarseness, bleeding nose, sneezing, pain in forward sinuses, cough, expectoration and dyspnea (or difficulty in breathing). In addition, individuals who live in the two most air-polluted communities were eliminated from our study. These two areas were determined by an air-pollution index developed by Dr. Tomas Morales Cardona, in collaboration with the Puerto Rican Environmental Quality Board, and the Puerto Rican office of the United States Environmental Protection Agency.

Individuals who had not lived at least one year in Puerto Rico, and those with unacceptable spirometry were also eliminated. An unacceptable spirometry was that in which FEV1 or FVC could not be correctly measured due to cough, obstruction of teeth or tongue, no maximum effort, air escape, less than 6 seconds duration, discontinued or interrupted registration and lack of understanding of the procedure.

After the above exclusions, 215 healthy subjects (108 girls and 107 boys) remained for this study.

Age was computed as completed years by using the date of birth and the date of the study. For the younger children, this information was provided by their parents. Height was recorded in centimeters with the subjects standing in low heels or without shoes.

A maximum of three acceptable spirometric tests were taken for each subject and the maximum of these attempts was recorded in an ATPS (Ambient Temperature and Pressure, Saturated) scale. The spirometric measurements taken were forced vital capacity (FVC), and forced expiratory volume at one second (FEV1). The ratio FEV1/FVC was also computed for each individual.

Preliminary analyses were carried out to study the distributions and associations of the variables involved in the development of the predictive models.

Several models were tried for the prediction of FEV1, FVC and the ratio: linear, quadratic, cubic, or logarithmic. Separate regression equations were computed using one predictor, either age or height. Then, the best models were selected by comparing the models R2, checking for violation of assumptions, and analyzing the model residuals. For the models selected, the fifth, twenty-fifth, fiftieth, seventy-fifth, and ninety-fifth percentile of the predicted value were computed to develop spirometric nomograms.

The 215 subjects were separated by gender, and the means, standard deviations and some percentiles were computed for subgroups of age and height.

These data show the expected increase in spirometric measurements with increasing age as well as height. We could also see that boys tend to have higher values of FVC and FEV1 than girls, but they show slightly lower values for the ratio.

A correlation analysis was carried out before fitting the models. The correlation between FVC and FEV1 was almost perfect (r = 0.9914), and both measurements showed high correlation with age and height, which does not occur with the ratio. In addition, the highest correlations were obtained between the logarithm of the spirometric values and age and the cubic value of height.

After fitting the different models, the best ones were selected. An analysis of residuals showed no patterns, thus reflecting adequate fits. The chosen model equations are:

No equations for the ratio are presented because no acceptable prediction could be obtained by using height or age.

The corresponding nomograms were produced based on these equations, where the predicted values as well as the percentiles are shown. Only nomograms using height (Figures 1-4) are provided, since better prediction was obtained with this variable. These nomograms can be easily used in clinical practice; for example, a girl 150 cms. tall with a FEV1 of 2.10 liters would fall within the twenty-fifth and seventy-fifth percentile curves (Figure 1). Therefore, her pulmonary function would be within normal parameters. On the contrary, a FEV1 of 1.52 liters for a girl of the same height would fall below the fifth percentile curve. This represents evidence for abnormal pulmonary function, and the need for further tests and treatment. 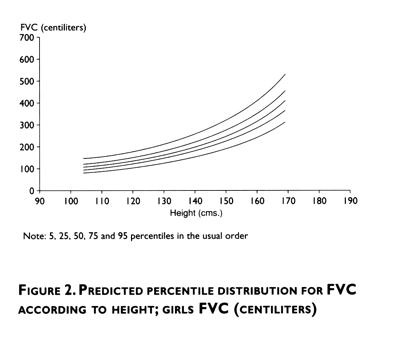 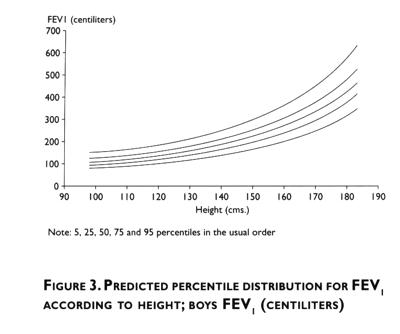 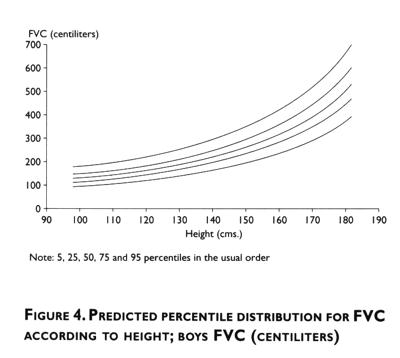 We found a close relationship between higher pulmonary function and older and taller children.

Predictions obtained by using a single predictor, either age or height, were found to be highly significant. However, height seems to be a more reliable predictor than age, since slightly higher values of R2 were obtained.

The logarithmic models and the use of the cube of height were found to be the most appropriate for the data. These types of transformations have been used in previous models.1,4,7,10

Despite the fact that separate analyses were carried out for girls and boys, we ended choosing the same type of models for both sexes. However, for girls, we found that a non-logarithmic model with age, appeared to be significant and valid. But, with the logarithmic model, we still noticed a slightly better fit.

Similarly, the predictive equations for FEV1 and FVC have the same form. This was not surprising given the nearly perfect correlation between these measurements.

In the regression models for boys using height as the predictor, the fitted models seem to have some problems with heteroscedasticity and non-Gaussian errors. These problems were not sufficiently severe to invalidate the estimates, although they might have caused some loss of precision. This is specially important for the percentile computations. Therefore, the presented percentiles should be used with caution.

It may be argued that the use of logarithms and cubic values makes the predictive equations difficult to apply in medical practice. For this reason, the set of charts (Figures 1-4) were developed. With these charts, the physician does not have to go through cumbersome calculations, and has an instrument similar to the pediatric growth charts she/he is already used to. In addition, we consider these nomograms even easier to use than those produced before by other authors.4,7

We also studied predictive equations with the use of both age and height. A slightly better prediction can be obtained when using these equations (R2=0.84-0.87) However, similar nomograms to those produced with a single variable cannot be developed to incorporate the two-variable model. An instrument based on the two-variable model would be too complex to be used in practice.

In spite of the slight loss in prediction accuracy, we still support the use of the nomograms because the models with one predictor were also highly significant. The mentioned loss is about 5% (comparing the R2s of the two-variable model and the single variable model with height as a predictor).

With respect to the FEV1/FVC ratio, it turned out to be a very stable measurement that remains almost unchanged among the different age and height groups. For these individuals, the global 5th and 95th percentiles were 83.1% and 97.3% for girls, and 80.5% and 96% for boys. These global values can be used as quick reference values regardless of the age and the height of the child.

One limitation of this study is that the data were collected in public medical institutions, so this study does not apply to those who use only private medical services. However, we can state that, in Puerto Rico, most people use public services, roughly two thirds of the population. This is a fact that applies to most Latin American countries, where the government supports a medical system that can be used by nearly everyone, and where private services are used by those who wish to do so and can afford them.

Finally, it is important to mention here that the ATPS scale is the standard method employed in Puerto Rico. The spirometer was not equipped with a thermometer for determining the BTPS (Body Temperature and Pressure, Saturated) scale correction factor. Since most other studies2,8,10,12 report results in the BTPS scale, the tables by Bartels, H. et al.13 can be used. In addition, the ambient temperature in Puerto Rico undergoes little variation throughout the year, from 80-85 ° F.

The use of spirometric reference values that are specific to the population being tested is always preferable. The data used in the development of these reference standards come from the currently best an most extensive spirometric study conducted in Puerto Rico. Furthermore, the nomograms developed here provide a simple way to use these references in clinical practice.

The authors wish to thank Dr. Tomas Morales Cardona for conducting the spirometry study and Dr. Jose Becerra for clarifying remarks related to the database and other valuable comments.