Time-trends and causes of infant, neonatal and postneonatal mortality in Mexico, 1980-1990

In the second half of this century, infant mortality rates (IMR) have declined in many lesser developed countries.1,4 Nevertheless, high IMR continues to be an important problem in many regions of the world.5,6

At present, there are important differences in IMR in the countries which make up the American continent; these range from less than 20/1 000 in the United States, Canada and Cuba to approximately 100/1 000 in Bolivia and Haiti.7,9 In the Latin American and Caribbean region, considered as one population, children have five times the risk of dying in the first year of life when compared with their counterpart born in the United States.I

The IMR has two principal components: a) neonatal mortality rate (NMR, encompassing deaths in the first month) and b) postneonatal mortality rate (PMR, deaths from 1 to 12 months).I International literature indicates that most of the reduction in IMR is attributable to advances in the health status of postneonatal infants, as well as to improvements in sanitary conditions and greater access to general health care programs.10 Among the health care strategies which have had the greatest impact on PMR are: promotion of breast feeding, vaccination programs, and wide availability of oral rehydration therapy.6,11 On the other hand, reductions in NMR have been more difficult, and this is due to the more complex factors involved, including genetic defects, low birth weight, and lack of access to modern obstetric services.11,12

The neonatal proportional mortality (NPM, neonatal deaths/all infant deaths) is a useful indicator which relates the two components of IMR.13 In industrialized countries where infant health status is good, the NPM is much greater than fifty percent. For example, in the United States, since 1950, two thirds of all infant deaths occur in the neonatal period, while in lesser developed nations, the NPM is a small fraction.14

The reduction in IMR in Mexico during the 1980s has been commented in several publications.10,16,18 There was also some improvement in the registry of infant deaths during this period. Nevertheless, to date there is a subregistry in these data, and this problem is more important in the rural areas.16,19 Thus, as has been mentioned elsewhere, the IMR calculated according to the data reported by Mexicos system of vital statistics is somewhat underestimated.20

To date, there are no publications which reveal details of the recent decline of IMR in Mexico. This article has the purpose of analyzing the time-trends and causes of infant, neonatal, and postneonatal mortality in Mexico in the period from 1980 to 1990. The NPM is also calculated. Data analysis indicates that the decline in IMR in Mexico in the 1980s resulted from decreasing PMR, while NMR was unchanged.

The data on infant deaths by age and cause used in this study came from eleven yearly tabulations (1980 to 1990) published by the Mexican National Institute of Statistics and Geography, and made available in an electronic data base by the General Direction of Statistics and Information of the Secretary of Health.21

Seven main causes of IMR were taken into consideration. These were based on the Ninth International Classification of Diseases: Perinatal problems (760-779); Intestinal infections (001-009); Pneumonia and influenza (480-487); Congenital defects (740-759); Nutritional deficiencies (260-269); Acute respiratory infections (460-466) and all other causes combined (other classifications not registered in the six causes mentioned).

Simple linear regression models were used to represent the time-trends for IMR and its components and causes.23,24 The slopes of the regression lines were evaluated for their statistical significance at the probability level of p<0.05. Robust regression of study data was also carried out, but this procedure did not produce results which were different from those derived from simple linear regression models, and therefore, the former models were maintained. The parallelism test was used to evaluate whether the increasing or decreasing in the NMR and PMR for each group of causes were similar. Rejection of the hypothesis of no differences in slopes was set at p<0.05.22

Table I
Time-trends in infant, neonatal and postneonatal
mortality rates in Mexico by causes, 1980-1990 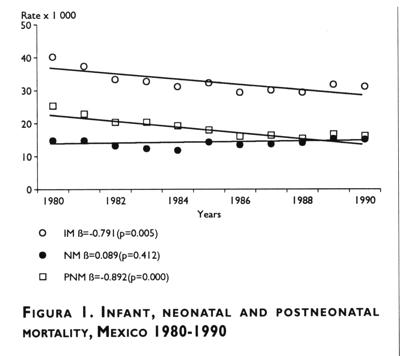 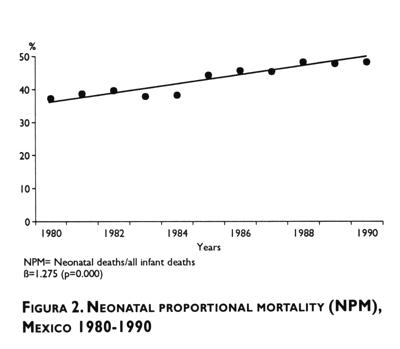 Table I shows the time-trends modeled for IMR and its components by causes. During the 1980s the rates of Intestinal infections, Pneumonia and influenza and other causes revealed a declining trend in all three indicators. Perinatal problems and Congenital defects increased for all three indicators. The IMR and PMR for Nutritional deficiencies increased significantly, while the NMR for the same cause was almost stationary. The three indicators for Acute respiratory infections showed only slight changes and none were important.

The negative slopes for Pneumonia and influenza tested as parallel for neonatal and postneonatal groups. For Acute respiratory infections the trends were equally stationary for both groups. The slopes of all causes and the other four specific causes were confirmed as non-parallel, indicating that the trend of one component of infant mortality decreases or increases faster than the other age group.

Mexico is grouped with the countries of intermediate level child health indicators.15 According to vital statistics data provided by the Mexican government, the IMR in Mexico in 1980 was approximately 40/1 000, and in 1990, this indicator had descended to approximately 30/1 000.

Our analysis showed that during this period, the descending time-trend for IMR was statistically significant and the PNM increased from 37.6% a 48.8%. On the other hand, the PMN did not reach 50%, a proportion which would have indicated that the nation was about to enter the select group of countries with good infant health conditions.3,4,14

Mexico in the mid-1990s still has important problems related to the health and well-being of young children, and to date, some Mexican states have IMR rates greater than twice the national average.20 More study is needed to evaluate time-trends in IMR in all 31 states and the Federal District in order to document the corresponding progress, or lack thereof, according to geographical zones.21 Moreover, in future research concerning infant mortality in Mexico, it would also be important to fit regression models, taking into consideration the varying levels of subregistry of infant deaths in the different areas of the country.20

According to the results of this study, the causes of infant death which were reduced during the decade of the 1980s were: Intestinal infections, Pneumonia and influenza, and all other causes combined. These decreases probably resulted from improvements in sanitary campaigns, literacy campaigns for women, promotion of oral rehydration therapy, massive immunization campaigns against measles and greater access to health care services.10 At the same time, the rates of Congenital defects and Perinatal problems, two causes which are related to the quality of prenatal and obstetric care, showed increments. An increase was also observed in Nutritional deficiencies, but this may be explained by a better registry of this cause over the years, although the possibility exists that in some parts of the country this problem, in fact, might have worsered. No significant changes were observed in Acute respiratory infections.

It is clear that the decrease observed in IMR in Mexico during the 1980s was due to a declining PMR, while the NMR was virtually unchanged. It is well-known that there are important problems in the vital statistics in Mexico due to underregistry of deaths in the first year of life, and particularly those that occur in the first month. This situation is further confused by the extemporary registry of births, and together, these two biases affect the magnitude of the IMR, PMR and principally that of the NMR. It is likely that the trends which are presented in this study are valid if we assume that the underregistry of births and births were almost constant throughout the decade, and that the rates which are presented here represent similar and constant underestimates.

In conclusion, among the public health challenges for Mexico in the present decade, further improvements in postneonatal health and special efforts to reduce neonatal mortality must be included. This last aspect can only be brought about by a firm national commitment to provide good prenatal and infant delivery services to all mothers and special efforts for improving obstetric coverage to high risk populations.

I London AS. An investigation of the impact of advances in medicine on the biometric analysis of infant mortality. Unpublished paper presented at the Annual Meeting of the Population Association of America, Washington, D.C. 1991:37.