The beneficial effects of n-3 polyunsaturated fatty acids (n-3 PUFA) in human health have been largely studied. The pioneering work on Greenland Eskimos by Bang and Dyerberg in the mid-1970s1,2 has resulted in extensive research programs worldwide on the beneficial effects on health of diets rich in fish and marine oils. Since then, the role of n-3 PUFA on human nutrition has been the main objective of scientists. Cardiovascular disease (CVD) is considered as one of the most significant health problems in the world due to the elevated death rate reported during the last decades. Particularly, in the United States, CVD is one of the most significant diet-related health problems. The same pattern seems to follow in Mexico. Indeed, during the last decade, cardiovascular disease has become one of the leading causes of morbidity and mortality in Mexico.3,4

Dietary habits in the Mexican population are very much alike those observed in the United States specially among the middle and upper class population. The relationship that exists between dietary lipids and cardiovascular diseases is well documented.5-7 Hyperlipidemia has been identified as a major risk factor for athersoclerosis and is associated with elevated circulatory levels of cholesterol, cholesterol esters and triglyceides. Therefore, there is much interest on studying the role of dietary fats on these blood circulating parameters and the factors which contribute to the development of hyperlipidemias in the pathogenesis of atherosclerosis and cardiovascular diseases.8-13 Scientific attention has been focused on the therapeutic value of fish oil rich in eicosapentaenoic (EPA) and docosahexaenoic (DHA) acids on serum lipids, lipoproteins and functional parameters of the circulating red blood cells (RBC).14-23 Moderate intake of n-3 fatty acids can markedly increase the concentration of these fatty acids in plasma, red blood cells and other cellular tissues.24-27 Given the association between dietary fatty acids and the risk of sudden cardiac death, it is important to establish the correlation between dietary n-3 PUFA and serum lipidic profile in a Mexican population. Therefore, the aim of this study was to examine the effect of dietary n-3 PUFA intake on plasma lipidic profile and fatty acid composition of erythrocyte membrane.

The effect of n-3 PUFA was evaluated on 45 Mexican volunteers from the Instituto Tecnológico de Veracruz, in 1995. The group was composed of 23 men and 22 women. They were classified according to their serum lipidic profile as normolipidemic subjects (n= 14), hypercholesterolemic subjects (n= 22) and hypertriglyceridemic subjects (n= 9). In our laboratory, the normal range for cholesterol in fasting serum was considered to be <240 mg/dl and for triglycerides <150 mg/dl. Participants average weight was 75.1 ± 15.3 kg and average age was 46.8 ± 7.0 years old. Subjects were checked weekly for compliance with the study.

Participants were requested to sign an agreement of participation form, after a clear explanation of the protocols. Supplement given to all subjects consisted of 3 g of salmon oil (Prime Natura, Palo Alto CA) capsules of 0.5 g containing 0.06 g of eicosapentaenoic acid and 0.05 g of docosahexaenoic acid in a dose of 6 capsules daily during four weeks. Fasting was requested from participants before sample drawing. A 10 ml venous blood sample was drawn from the anticubital vein and five ml were put into a heparinised tube to analyze for RBC fatty acid composition and 5 into a tube to recover serum and determine immediately the serum lipidic profile.

Lipid extraction from RBC membranes was carried out by the Bligh and Dyer method28 and the methyl esters were formed by saponification followed by methylation by acidic esterification with methanol. Fatty acid methyl esters were extracted using hexane and analyzed by gas chromatography using a Hewlett Packard model 5890 with a 5 phenylmethyl silicone capillary column and flame ionization detector. Injection and detector temperatures were 250°C, helium was the carrier gas and the column temperature was programmed to rise from 130°C to 240°C at a rate of 8°C/min. Fatty acid methyl esters (FAME) peaks were identified by comparison with authentic fatty acid standards (SIGMA). Results were analyzed individually with a Minitab 8.2 accelerated computer statistical software. It is important to mention that the statistical analysis was done between the values before and after supplement intake of each individual and not between the mean of the whole group.

Therefore, normolipidemic subjects did not manifest statistically difference in the serum levels of total cholesterol, triglycerides and LDL-cholesterol. HDL-cholesterol level, on the other hand, increased significantly (p< 0.05) by the n-3 PUFA intake in this group.

In the hypercholesterolemic group supplemented with n-3 PUFA during four weeks, total cholesterol, triglycerides and LDL-cholesterol levels decreased significantly, (6.6%, 12.5% and 9.16% respectively) compared with the initial values. Results for this group are expressed in figure 1. There was significant increase (p< 0.01) in serum level of HDL-cholesterol (11.6%) compared with the baseline level. The inclusion of n-3 PUFA in the diet was associated with a normalization of serum lipidic profile and an increase in the protective factor for cardiovascular disease (HDL). 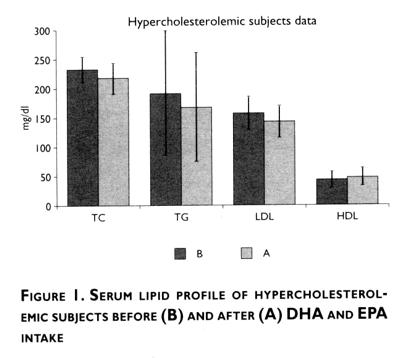 The hypertriglyceridemic group supplemented with n-3 PUFA exhibited the greatest serum profile modifications. Results of this group are assembled in figure 2. Total cholesterol level decreased by 5.33%, triglyceride reduction was 16% and LDL-cholesterol level fell by 7.74% in comparison with the initial lipid profile values. A remarkable increase (13.5%) in HDL cholesterol was also observed in this group. 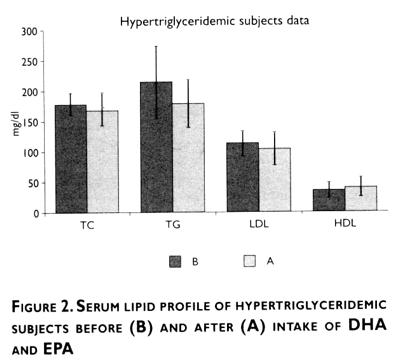 The hipolipidemic effect of n-3 PUFA in hypercholesterolemic and hipertrigliceridemic subjects in this study is in accordance to those reported by several authors.10, 13, 20, 22

The slight changes in plasma lipids in normolipidemic subjects produced by the intake of n-3 PUFA are in accordance to those reported by Sanders and Hochland.29 These authors, however used higher dose (10g/d vs 3g/d) and shorter time (2 wk vs 4 wk). The increase in HDL-cholesterol in this group confirmed the results reported by Harris,22 and Sanders and Hochland.29 Dietary records in our study and the studies mentioned above were not reported, so there is no data available to discuss on the dietary history. If the intake of PUFA was low, before the study, the intake of n-3 PUFA was sufficient to increase the cleareance of cholesterol through HDL. If the PUFA intake was high, before the study, the intake of n-3 PUFA could still improve the lipid metabolism by increasing HDL, but not high enough or longer enough to reduce further the levels of triglyceride and total cholesterol. On the other hand, how low cholesterol levels ought to be to consider it a low risk factor for cardiovascular disease? Recently, Yamamoto et al 30 reported total cholesterol values of 208 ± 43.4 for men and 206 ± 36.6 mg/dl for women in a study of 3 312 581 subjects in Mexico City. These values are not considered elevated, however, during the last years, cardiovascular disease has become one of the leading causes of morbidity and mortality in Mexico.3,4 It appears, on the other hand, that hypertriglyceridemia is most prevalent among the population in Mexico City.30 Since the most significant effects of EPA and DHA intake were manifested in the hypertriglyceridemic group, one might hypothesize a possible deficiency of these essential fatty acids among the Mexican population.

Besides, it is interesting to consider the following factors: Requirements for 18:2 have been proposed to be 2.5% calorie intake and for 18:3 n-3 0.5 % calorie intake.13 However, since we are more proned to greater intakes in n-6 PUFA than in n-3 PUFA, it has been proposed to use a ratio of n-3 PUFA/ n-6PUFA as a good way to estimate the daily requirement for these two fatty acid families. The usual sources for linoleic acid and alfa-linolenic acid are vegetable oils. However, since these PUFA are very susceptible to heat oxidation and since very often the most consumed food items are deep-fried products, most likely the requirements for the n-3 PUFA are not achieved. Specially important is the fact that when both families are supplied by diet at equal levels, desaturation/elongation enzymes which are the same for both families, manifest preference for 18:3 n-3.31,32 Does this mean cells are in shortage for this fatty acid family? Probably yes, since most studies report an increase in n-3 PUFA membrane phospholipids when supplied in the diet. Further research is necessary to come to a final consensus as to the dietary requirements for essential fatty acids in healthy population and the therapeutic effect of n-3 PUFA on hyperlipidemic subjects.

25. Lands WEM, Morris A, Libelt B. Quantitative effects of dietary polyunsaturated fats on the composition of fatty acids in rat tissues. Lipids 1990; 25:507.