Surveillance of nosocomial infections in a Mexican community hospital. How are we doing?

OBJECTIVE. To compare the nosocomial infection (NI) rate obtained from a retrospective review of clinical charts with that from the routine nosocomial infection surveillance system in a community hospital.
MATERIAL AND METHODS. Retrospective review of a randomized sample of clinical charts.Results were compared to standard surveillance using crude and adjusted analyses.
RESULTS. A total of 440 discharges were reviewed, there were 27 episodes of NIs among 22 patients. Cumulated incidence was 6.13 NI per 100 discharges. Diarrhea, pneumonia and peritonitis were the most common infections. Predictors of NI by Cox regression analysis included pleural catheter (HR 16.38), entry through the emergency ward, hospitalization in the intensive care unit (HR 7.19), and placement of orotracheal tube (HR 5.54).
CONCLUSIONS. Frequency of NIs in this community hospital was high and underestimated. We identified urgent needs in the areas of training and monitoring.

Nosocomial infections (NIs) continue to represent an important public health problem. The World Health Organization estimates that 8.4% of hospitalized patients suffer from NIs,1 although estimates in developing countries have shown higher rates.2,3 Community hospitals are estimated to have lower rates, although still considerable.4 Infection control programs have been demonstrated to reduce NIs in hospitals with active surveillance programs.5 Therefore, it is important to validate surveillance results, particularly in settings in which infrastructure and resources are limited. Among the variety of methods proposed to validate surveillance of NIs, retrospective review of clinical charts has been shown to have a sensitivity of 70 to 80%.6

The primary goal of this study was to compare results obtained by a retrospective review of clinical charts with those obtained by routine standard surveillance of NIs in the internal medicine ward in a community hospital located in southern Mexico. Secondly, we determined risk factors and consequences associated with NIs. We consider that this hospital exemplifies the problems faced by many hospitals in developing countries and that the limitations identified apply to most community hospitals in Mexico and other similar settings.

The hospital is located in Rio Blanco, with a population 39 327, located in a predominantly urban region in southern Mexico. It is affiliated with the Ministry of Health and has an estimated coverage of 1 million persons. Forty-six of its 118 beds are dedicated to internal medicine and surgery. During 2003 there were 7 598 discharges, of which 1 552 were from internal medicine. The hospital has had an infection control program since 1986. Procedures and definitions follow official guidelines.7 During 2003 this system reported a nosocomial infection incidence rate of 2.4 episodes of infections per 100 discharges from internal medicine. Hospital authorities requested that these results be validated. Institutional approval from the appropriate boards was obtained.

To review the effectiveness of the surveillance system, a sample was randomly selected from all patients who had been discharged from internal medicine during the study period (January to December, 2003). The clinical charts were reviewed for evidence of NIs that met the definitions established by the official norm.8 Discharges were reviewed by one of the authors (LR) and data were collected using standardized forms. A sample size of 500 discharges was planned to detect an infection rate of 2% from a total of 1 552 discharges, with a power of 80% and α level of 0.05. This sample size included an additional 25% for lost charts.

The definitions for NIs, infection sites, invasive procedures and classification of discharges followed standard guidelines.7,9 Underlying diagnoses were classified as described in the International Classification of Diseases.8

There were 27 episodes of NIs for 22 hospital discharges among the 440 hospital discharges. Nineteen patients had one episode, two patients had two episodes and one patient had four episodes. Main types of infections were diarrhea (9/27, 33.33%), pneumonia (4/27, 14.81%) and peritonitis (3/27, 11.11%). Cumulated incidence was 6.13 infections per 100 discharges, with an incidence density of 1.63 episodes of infection per 100 patient/days. Of the 27 episodes, cultures were performed in only 40.74% (n=11). The main microorganisms were Candida albicans, Pseudomonas aeruginosa and Klebsiella pneumoniae.

Characteristics of patients are described in Table I. Most of the patients were middle-aged men, and the average duration of hospitalization was less than 5 days. The most frequent underlying diagnoses were diabetes mellitus, renal failure, neoplasias, and diarrhea. There were no differences between infected and non-infected patients regarding underlying diagnoses. Fifty (11%) of the 440 patients died. None of the infected patients died.

Predictors of nosocomial infection by Cox regression analysis are shown in Table II. With the exception of orotracheal intubation, these associations were maintained when the model was controlled for underlying diagnoses and age. 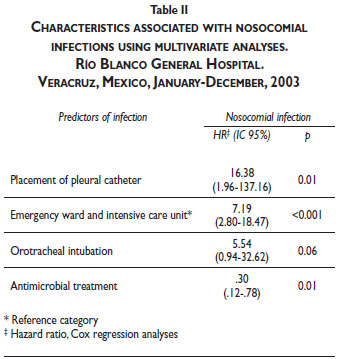 Figure 1 indicates the survival probability of the remaining non-infected patients, according to entry through the emergency ward and hospitalization in the intensive care unit. Patients having been hospitalized in these two services had a lower probability of remaining uninfected (p=0.001). 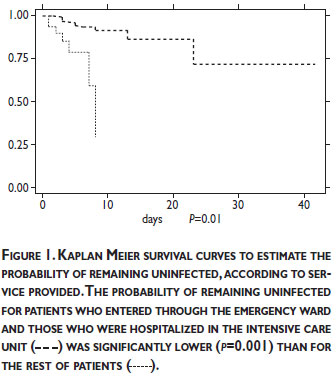 Sensitivity, specificity and predictive value of the routine surveillance system

The routine surveillance system reported 38 nosocomial infection episodes that occurred among the 1552 discharges during 2003 (rate of 2.4 per 100 discharges). Of the 27 episodes that were detected through retrospective chart review, only five were also detected by the routine system. If the retrospective review is considered as the gold standard, the routine system had a sensitivity of 22.72%, specificity of 98.88%, positive predictive value of 50.0% and negative predictive value of 96.05%. The routine system did not detect the 9 episodes of nosocomial diarrhea.

The comparison between the 500 discharges that were selected for analysis with the non-selected 1052 discharges from internal medicine during 2003 revealed that both groups were similar regarding age, sex, average days of hospitalization, cause of hospital discharge, main underlying diagnosis (diabetes, renal failure, neoplasias and diarrhea) and proportion of patients undergoing surgery. The comparison of the 60 discharges for whom the clinical chart could not be found with the 440 discharges whose charts were reviewed revealed that patients for whom the chart could not be found had a greater probability of death (48/440 [10.91%] versus 15/60 [25.00%] p=0.002) and renal failure (17/440 [3.80%] versus 6/60 [10.0%] p=0.03). Estimation of rates per 100 discharges if 0, 10, 25, 50 and 100% of the missing patients had been diagnosed with a nosocomial infection resulted in rates of 5.4, 6.6, 8.4, 11.4 and 17.4%, respectively.

This study shows that a comprehensive understanding of the pattern of NIs in a hospital should be based on a comprehensive clinical and bacteriological study. We were able to document important limitations of the routine surveillance system, including underreporting and lack of bacteriological information. We consider that the reported rates are underestimated and that, most probably, real rates are much higher. Despite these limitations we were able to show the impact that NIs have on increased days of hospitalization. Additionally, we were able to identify procedures and hospital areas that represent a higher probability of infection. Finally, our data emphasizes the fact that the mere existence of a nosocomial infection control program does not ensure the existence of âgoodâ surveillance; it is necessary to validate its results and ensure adequate feedback to the rest of the hospital.

Since we were unable to review 12% of selected charts, non-reviewed and reviewed charts were compared, revealing that the former had a higher probability of renal failure as an underlying diagnosis or death. Since both of these conditions may be associated with NIs, we estimated the rates of infection if a different proportion of patients for whom we did not review the charts were infected. Our estimation revealed that the real rate of infections may be up to three times our observed rate. Two other conditions favor our impression that the real rate of NIs is probably underestimated. First, the retrospective nature of our study harbors limitations for detection of NIs that were not adequately documented in the chart. Second, usage of microbiological support was very limited, which led to predominant detection of infections based on clinical or radiologic criteria such as diarrhea, pneumonia or peritonitis. Infections requiring microbiologic confirmation were missed, such as bacteraemias and urinary tract infections. Since diarrhea, pneumonia and peritonitis were the predominant type of infections we would expect different patterns of etiologic agents (such as Streptococcus pneumonia, Clostridium difficile, Enteropathogenic Escherichia coli, Staphylococcus epidermidis, among others.).

It is also worth noting that the sample size allowed us to estimate general incidence rates; it was not designed to estimate rates by type of underlying disease (for example among patients with renal insufficiency) or rates of associated mortality.

Our retrospective review revealed that the rate of NIs in the internal medicine ward in this community hospital is comparable to what has been reported in other community hospitals in developing countries.4,10,11 Diarrheas are most probably associated with infrequent hand washing by health personnel and patients,12 and have been identified as a common complication in hospitalized patients.13 This problem had remained undetected by routine surveillance in the study hospital and suggests the possibility that this condition is considered as common and ânormalâ in a setting where gastrointestinal infections in the community are common. As we do not have bacteriological information, we are unable to exclude the fact that diarrheas could be due to non-infectious etiologies such as adverse reactions to drugs. Another problem was the high frequency of NIs associated with placement and use of devices, probably due to lack of training of personnel performing the procedures.14,15 Training in infection control practices has been demonstrated to lower rates of infection in developing countries.16,17 Infected patients had a higher likelihood of having entered through the emergency ward and having been hospitalized in the intensive care unit, and multiple factors condition higher rates of infection in these areas; this needs to be carefully examined.18,19 In addition, a reduction greater than 50% in the rates of ventilator-associated pneumonia has been reported as a result of quality improvement methods.20

The impact of NIs in developing countries is proportionately far greater than in developed countries,2,21-24 as rates are higher and resources are more limited. Increase in days of hospitalization, as demonstrated in our study, has important economic consequences.25 Additionally, although we did not demonstrate increased mortality due to NIs, patients with this condition were more probable to be terminally ill when discharged. Although we were unable to determine if the nosocomial infection was causally associated with this illness, it may likely have contributed to worsening the prognosis.

Retrospective validation of prospective surveillance methods, although limited, has proved to be useful in other settings.26 After improving routine surveillance, the hospital committee would need to select an appropriate validation system according to the resources and identified problems (prospective review of all clinical charts and laboratory reports, periodic evaluation of risk areas, and prevalence studies, among others).27 Infection control programs have been identified as a starting point for quality assurance in that they are relevant to patient care and staff safety.28,29 Therefore, data from this study have important and challenging implications for the quality of care provided in the study hospital.

Our results indicate evidence of diverse severe problems that urgently need to be addressed in terms of training, use of prophylactic antibiotics and review of invasive and surgical procedures, particularly those that take place in the emergency ward or intensive care unit. This situation can probably be generalized to other community hospitals in the country. As occurs in hospitals with a larger number of beds, existence of official guidelines, in-hospital infection control committees and prospective surveillance systems are insufficient if not supported by a comprehensive approach that provides feedback regarding surveillance information on patient care.30

The authors want to acknowledge the support of Drs. Sergio Orozco, Cecilia García, José Sifuentes and Sigfrido Rangel, whose comments greatly improved the quality of the work; the Infection Control Program of the Instituto Nacional de Ciencias Médicas y Nutrición Salvador Zubirán, who supported the training of Dr. Ramírez, and the personnel of the Hospital General de Río Blanco who supported the review of clinical charts.

Partial funding was obtained from the Howard Hughes Medical Institute (ID 55000632). Dr. Ramírez López received an academic scholarship from the Mexican Council of Science and Technology (173754).

Declaration of conflicts of interest

We declare that we have no conflicts of interest.

3. Apisarnthanarak A, Fraser VJ. Feasibility and efficacy of infection-control interventions to reduce the number of nosocomial infections and drug-resistant microorganisms in developing countries: what else do we need? Clin Infect Dis 2009;48(1):22-4.

SciELO Analytics
Dimensions
Surveillance of nosocomial infections in a Mexican community hospital: how are we doing?
PlumX