An unintended pregnancy is a pregnancy that is either mistimed (occurred earlier than the desired time) or unwanted (occurred when no more children were desired) at the time of conception.1 Worldwide, of the 210 million pregnancies occurring each year, nearly 80 million are unintended.2 Women who did not intend to become pregnant often resorted to an abortion, typically carried out beyond the reach of health services or providers.3

Unintended pregnancy poses hardships for families and jeopardizes the health of millions of women and children.4 It is, thus, an important social and public health concern.5 It increases the risk of abortion-related morbidity and mortality,6 especially in countries where abortion is illegal.7 In fact, unsafe abortion is one of the common results of unintended pregnancy, from which 80000 women die each year and over 95% of these deaths occur in developing countries.8 Researches also argue that unplanned pregnancy leads to adverse mental health consequences9,10 and has adverse impacts on antenatal care, breastfeeding and infant mortality.11,12

The study used data from the nationally representative 2007 Bangladesh Demographic and Health Survey (BDHS). The survey used a multistage cluster sampling procedure to gather information from a weighted sample of 10996 ever married women from the six administrative divisions in the country. The survey obtained detailed information on fertility, marriage, fertility preference and intention, awareness and use of family planning methods, childhood mortality, and maternal and child health, among others. It followed all the protocols prescribed by the World Health Organization (WHO). A written consent was obtained from all the respondents prior to starting the interview. The sample was weighted by the weighting factor provided in the survey data. Of the respondents, 3866 rural women had at least one live birth during the five years preceding the survey; they are the basis of the study. The details of the survey are described elsewhere.13

The outcome variable of this study is the 'intention status of the most recent live birth in the five years preceding the survey date.' This was determined by asking women, 'Did you want your last child?' The responses to this question were: 'wanted then,' 'wanted later' and 'wanted no more' (unwanted). The latter two were merged as 'unintended' to make the variable binary. In this study, as in other studies,5,19 some women are assumed to state that an 'unintended' pregnancy had been 'intended' and vice versa due to memory collapse.

Both bivariate and multivariate statistical analyses were employed in this study. After performing chi-square tests to examine the association between the dependent and independent variables, binary logistic regression models were constructed to examine the net effects of the independent variables on unintended pregnancy. Prior to performing the statistical analyses, multi-colinearity was tested. Age and pregnancy order were shown to have co-linearity. To avoid this co-linearity two separate logistic regression models were constructed. Model I was constructed by including age and other selected independent variables, except for pregnancy order, while in model II age was replaced by pregnancy order. To check for significant interaction effects among the explanatory variables, we tested major interaction terms between age, regions and wealth; however, they were not statistically significant. Therefore, the models constructed without interaction terms are the mostly parsimonious models, which provide the best estimations of the effects of the explanatory variables. The statistical analyses in this study were analyzed using SPSS v17.

Profile of the respondents

Table I shows the background characteristics of the respondents. The mean age, age at marriage, and mean number of children ever born were 25.5±6.4 years, 15.2±2.5 years, and 2.7±1.8 births per woman, respectively. Twenty-eight percent had no formal education, 40% had secondary or higher education, and 84% were married before age 18 the minimum legal age at first marriage for women in Bangladesh. The vast majority of the respondents were Muslims. Of the most recent births, roughly 32% were the first pregnancy, 25% were second, 17% were third and the rest were fourth or higher order pregnancy. Fifty-two percent of the women discussed FP with their husbands. With regard to wealth index, 51% were poor and 28% were rich. Although 80% had ever used any modern method, the current use rate of modern methods was 49%. Of the respondents, 70.0% reported that their most recent pregnancy was planned, 14.3% reported that it was mistimed and 15.7% reported it was unwanted.

Figure 1 shows the trends of unintended pregnancy at the national level in Bangladesh as obtained from the last five BDHSs conducted during 1993-2007. The figures revealed fluctuations in the rate of unintended pregnancy over this period. When comparing the period 1993-1994 to 2007, a decrease from 33 to 29% can be observed, and there was a consistent decrease from 1999-2000 to 2007. 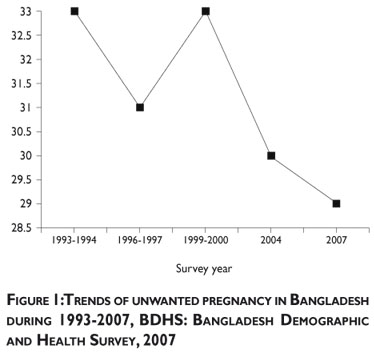 Table III and Table IV show the results of logistic regression analyses. The results of multivariate logistic regression were almost the same for all the covariates in the two separate models. In both models, women's education, age at marriage, inter-spousal communication about FP and current use of FP methods appeared to have insignificant effects on unintended pregnancy when other variables were controlled, whereas pregnancy order, age, religion, ever use of FP methods, region and wealth index were significantly associated with pregnancy intention status. 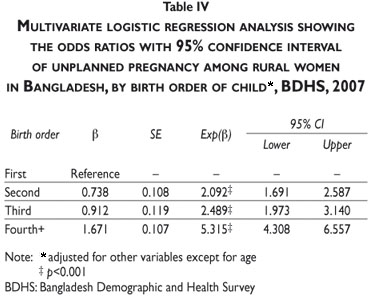 Our study suggests that millions of Bangladeshi rural women have confronted unwanted pregnancy at some point in their lives. Our findings show that age, religion, administrative region, wealth index, and ever use of any contraceptive method were significantly associated with unintended pregnancy, while pregnancy order was the most single determinant of unplanned pregnancy. And though studies conducted elsewhere showed that unplanned pregnancies happen for many reasons including religious and cultural beliefs contraceptive failure is shown to be the most important factor.23 Therefore, the relationship between the use of modern methods and increased risk of unintended pregnancy suggests an urgent need for further research.

Findings indicate that particular groups of women had an increased risk of unplanned pregnancies, thus the urgent need for quality family planning services in rural Bangladesh. For example, the significant difference in the pregnancy intention status by region suggests the need for expanded and improved family planning services among women of Barisal, Chittagong and Sylhet, as these divisions are distinctive in terms of their geographical nature and cultural variations among the inhabitants. According to the 2007 BDHS, women from these three divisions had higher levels of fertility and a lower use rate of contraceptive methods as compared to other divisions.13 Targeting these areas and population subgroups with expanded FP programs may reduce the incidence of unintended pregnancy as well as fertility.

As was expected, older and Muslim women were at increased risk to have experienced an unintended pregnancy as compared to younger and non-Muslim women. It is evident that Muslim women as compared to their non-Muslim peers are less likely to use modern methods due to their traditional beliefs and cultural norms, while older women are more reluctant to use modern methods as compared to their younger counterparts, resulting in a higher risk of unintended pregnancy among the former.13 Early initiation of sexual intercourse, (early age at marriage) is another important aspect of unplanned pregnancy. Bangladesh has a long tradition of early marriage and has one of the lowest mean ages at first marriage for females around the world. This results in women having marriages with longer duration and, hence, increases the risk of frequent and unintended pregnancies. The above findings are consistent with many studies conducted elsewhere.21,24

Women's education an important factor in explaining the fertility and fertility behavior of women had no significant effect on unintended pregnancy in our study. This finding is contradictory to those of other studies25,26 and consistent with studies conducted in Nepal, Palestine, Japan and Indonesia.21,24,27,28 The possible reasons for the lack of association between women's education and unintended pregnancy may be the low variability of education in the sample of women and lower participation in formal jobs. However, the fact is that this relationship persists after controlling for fertility preference and family planning practice, suggesting that the relationship between education and unplanned fertility may be quite complex and not fully explainable by this factor.25

There are several limitations to be considered when interpreting these findings. First, the study used cross-sectional survey data that looked retrospectively at women's pregnancy intention status. Thus, the study results should be cautiously interpreted in view of the limitations of the cross-sectional design, which limits a study's ability to draw causal inferences. Second, since retrospective information generally suffers from underreporting, the analysis can only provide evidence of statistical associations between those items and the experience of unintended pregnancy; it cannot show cause-effect relationships.21 Despite this, the strength of the study is that it dealt with nationally representative sample survey data that are mostly used in health and demographic related research.

The results indicate that unintended pregnancy is a major obstacle to reduce fertility to replacement level, which is a priority for population policy in Bangladesh. Policymakers and health service providers can benefit from the findings of this study to formulate suitable programs. In conclusion, programs should aim to reduce unintended pregnancy by focusing on all those factors identified, so as to decrease fertility and infant and maternal mortality, as well as the need for abortion. Intervention programs concerning reproductive health and services should be undertaken and awareness should be created as to the use of effective contraceptive methods to avoid unintended pregnancy, not only to reduce fertility but also to reduce adverse health outcomes for rural women in Bangladesh.

3. World Health Organization (WHO). Maternal Mortality in 2006: Estimates Developed by WHO, UNICEF, UNFPA and the World Bank. Geneva: WHO, 2008.

25. Magadi MA. Unplanned childbearing in Kenya: the sociodemographic correlates and the extent of repeatability among women. Soc Sci Med 2003; 56:167-78.

29. Goicolea I, and Sebastian MS. Unintended pregnancy in the Amazon basin of Ecuador: a multilevel analysis. Int J Equity Health 2010; 9:14.