OBJECTIVE: The aim of this study was to identify the etiology and the serotypes of S. pneumoniae (Sp) in Mexican children with acute otitis media (AOM).
MATERIALS AND METHODS: The study includessamples frompatientsdiagnosed with AOM at the Federico Gomez Children's Hospital of Mexico (2002-2003),with positive culture for Sp bacteriologically confirmed in middle ear fluid obtained by tympanocentesis. All Sp were serotyped. A total of 138 samples from 135 children with AOM were included.
RESULTS: Sp was isolated in 72 samples from 70 children. Sixty (85.7%) were previously healthy and 10 (14.3%) were immunocompromised. The most common serotypes were 6B and 19F (16.67%), and 6 A, 14 and 23F (15.27%).
CONCLUSION: The distribution of serotypes among the children with AOM in the study is similar to that reported in developing cities, and 63.9% of the isolated serotypes are found to be included in the 7-Valent Pneumococcal Conjugate Vaccine (PCV), 68.1% in the 10-Valent PCV and 83.3% in 13-Valent PCV.

Acute otitis media (AOM) is one of the most common infections in the world, and mainly affects children. The epidemiology of acute otitis media over the last decade has indicated a change in the course of the disease, with more children experiencing recurring episodes during their first year. Since this is one of the diseases for which antibiotics are most indicated, it has brought about changes in the susceptibility to antibiotics of the pathogenic bacteria involved, as well as changes in treatment strategies.1

The 7-valent pneumococcal conjugate vaccine (7-valent PCV) has shown its efficacy in preventing the specific Streptococcus pneumoniae serotypes that cause otitis, and reducing the resistance of respiratory pathogenic bacteria to antibiotics.2,3 Before the 7-valent PCV was given universally in the United States, around 7 000 000 cases of AOM caused by S. pneumoniae had been estimated.4

Due to its importance and epidemiological frequency, AOM is one of the infectious processes for which antimicrobials are most frequently prescribed, and sometimes incorrectly. This is considered to be the cause of increased anti-microbial resistance in many parts of the world.5 The pathogens that are the most common cause of AOM are Streptococcus pneumoniae (25-50%), Haemophilus influenzae (15-30%) and Moraxella catarrhalis (3-20%). Nevertheless, it was not possible to isolate any bacterial pathogen in 16% of cases or viral pathogen in 25% of cases.6,7

The leading bacterial causes of AOM in Mexico and worldwide are Streptococcus pneumoniae and Haemophilus influenza nontypable.8,9 Treating AOM caused by Streptococcus pneumoniae in children under the age of two has become complicated in Mexico and around the world due to decreased susceptibility to antibiotics and the increase in more virulent serotypes, such as those included in the 7-valent PCV.10 The availability of local epidemiological information about the S. pneumoniae serotypes that cause AOM is therefore needed.

This epidemiological approach is of great interest as there is evidence that preventive measures can be taken once the S. pneumoniae serotypes involved in AOM are known, particularly those contained in the vaccine.3,10 Therefore, the aim of this study was to identify the etiology and serotypes of Streptococcus pneumoniae that cause AOM in a selected group of Mexican children.

This study was an open, observational, retrospective, cross-sectional study. Samples were included of patients diagnosed with AOM at the Federico Gomez Children's Hospital of Mexico between March 2002 and March 2003. The clinical characteristic of the patients selected was bacteriological confirmation using tympanocentesis to remove fluid from the middle ear in order to confirm the bacteriological diagnosis.

The patients were clinically evaluated by an otorhinolaryngology specialist and classified by the head of otorhinolaryngology. The tympanocentesis was performed with patients who needed a bacteriological diagnosis in order to identify the bacterial etiology and determine a specific treatment.

The procedure was performed by an otolaryngologist using microscopic vision. After the external auditory canal was cleaned, samples were taken using a centuria device. Informed consent from one of the parents of each patient was obtained before performing tympanocentesis. Patients excluded were those with a ruptured eardrum within 48 hours of performing tympanocentesis and those who had ventilation tubes and craniofacial deformations.

Samples taken from the middle ear were cultured in sheep blood agar at 5% and chocolate agar incubated at 37ºC for 24 hours in a CO2 atmosphere at 10%. Isolation of S.pneumoniae was identified based on colonial morphology microscopy, susceptibility to optoquine and solubility in bile.11 Serotyping was performed usingthe Quellung reaction with specific pneumococcal antiserums from the Statens Serum Institute (Copenhagen, Denmark). All isolations were typed according to group and factor based on Danish nomenclature.12

Of the 70 patients in which S. pneumoniae was isolated, 60 (85.7%) were previously healthy and 10 (14.3%) suffered from an underlying disease that made them immunocompromised. The average age of patients who had S. pneumonie isolated in their ear was 42.5 months with median of 22 months (range 5-109 months). Fifty five percent of patients were under 24 months (Table I). Two were diagnosed with human immunodeficiency virus (HIV) and 8 were diagnosed with acute lymphoblastic leukemia and treated with chemotherapy. The two patients with HIV presented recurrent otitis media on two occasions. 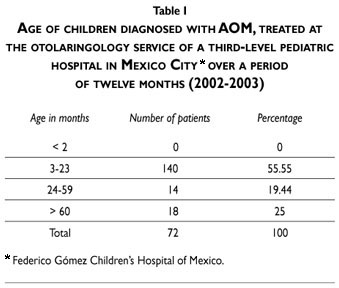 In terms of severity of the infection, of the total 72 cases of otitis, 64 (88.9%) episodes were classified as AOM, four (5.5%) as acute bilateral otitis, and four (5.5%) as recurrent otitis. The latter correspond to two samples from each of the two patients who presented two different episodes. 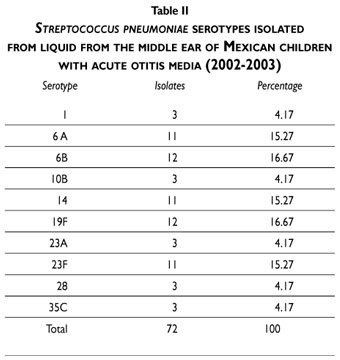 AOM is one of the most common infections in the world, particularly among children under the age of 2 years. The bacterial pathogens in AOM that are most frequently isolated are S. pneumoniae, H. influenza nontypable,and M. catarrhalis, with S pneumoniae being that which is the leading cause of AOM and for which there is the least possibility of a spontaneous cure.13-14

S. pneumoniae is considered to be the more likely cause of complications such as spontaneous rupture of the eardrum and may even cause loss of hearing.15 In some developing countries, AOM and its complications may cause up to 50 000 deaths a year.16 Epidemiological surveillance studies show5,6,7 that before the 7-valent PCV vaccine was introduced, S. pneumoniae was the most common pathogen isolated from fluid in the middle ear of children with AOM (47.7-53% ).17

The most frequent S. pnenumoniae serotypes in our study are: 6B, 19 F, 14, 23F and 6A. It is well known the serotypes that cause AOM worldwide vary according to a number of factors, such as age, health and geographical location.18-22

A review of the most prevalent serotypes involved in AOM in various geographical areas, including the United States ofAmerica, indicate that the most frequent ones are 6 A, 6 B, 14, 19 A, 19 F and 23 F.18-22 Of these six serotypes, four (6 B, 19 F, 14 and 23 F) coincide with the data obtained from our study. When comparing these with AOM-related serotypes in other countries, such as Costa Rica23 and Argentina, there are major differences, particularly in Costa Rica where serotypes 3 and 19F are significant. In Argentina, serotype 14 represents 53.5% of total AOM cases, in contrast to 15.2% in this study.18 In addition, in Europe,24-26 the most common serotypes are 1, 3, 6, 9V, 14, and 23F, whereas in our study we found only three of these (6,14 and 23). These examples clearly show geographical differences in the prevalence of serotypes that cause AOM. Therefore, each country or geographic region needs to conduct active epidemiological surveillance of the S. pneumoniae serotypes that cause AOM.

Serotype 19A has increased substantially as a carrier in invasive infections and in AOM. Korea, Israel and Mexico have found 19A serotypes as carriers and in invasive forms.33-35

The most common AOM Sp serotypes worldwide are 6A, 6B, 14, 19A, 19F and 23F, while serotype 3 is rare.36 A Finnish study provides evidence of AOM prevention using 7-valent PCV.3

In addition to the 7-valent PCV vaccine's protective factors, it provides a number of other benefits, including: reducing the number of consultations related to AOM, reducing the need to use ventilation tubes for recurrent otitis, lowering the resistance of bacteria to penicillin and other antibiotics and strengthening the herd effect an indirect effect that has the greatest epidemiological impact.2,28,29,37

In a recent study in children associated with an insurance company and who received four doses of 7-valent PCV vaccine, consultations related to AOM decreased 42.7% and there was a reduction in antibiotic use.29

Our results could not be generalized to the entire Mexican population because in the study we only include a small group of children in a special population (Mexican children at a third level hospital, Children's Hospital of Mexico), from 2002 to 2003, before the universal 7-valent PCV was used in Mexico. Currently, there may now be new and different pneumococcal serotypes, therefore it is important to continue to conduct epidemiological studies.

These results highlight the need to use S. pneumoniaeconjugate vaccines universally, however, the regional epidemiology of predominant serotypes in AOM needs to be ascertained to develop recommendations suitable to each region. The importance of implementing epidemiological surveillance procedures should also be emphasized, so as to assess the impact and benefits of anti-pneumococcal vaccination.

Identifying the local epidemiology of Streptococcus pneumonaie serotypes associated with AOM is very important to developing the best prevention and treatment practices for pneumococcal otitis.

The only preventive action that may currently be taken against AOM caused by S. pneumoniae is the administration of S. pneumoniae conjugate vaccines.

Our results show that in a small group of Mexican children with AOM, 63.9% of S. pneumoniae serotypes identified as causing the disease are included in the 7-valent PCV vaccine.

4. Centers for Disease Control and Prevention. Prevention of pneumococcal disease: recommendations of the Advisory Committee on Immunization Practices (ACIP). MMWR 1997;46:1-24.

30. Pichichero ME, Casey JR. Emergence of multiresitant serotype 19A pneumococcal strain not included in the 7-valent conjugate vaccine as an otopathogen in children. JAMA 2007; 298:1772-1778.