OBJECTIVE: Comparison of routine hospital indicators (consults at the Emergency Room (ER) and hospital admissions) during the 2009 pandemic of the influenza AH1N1 virus at the national referral hospital for respiratory diseases in Mexico City.
MATERIAL AND METHODS: The outbreak was from April to mid-May 2009 and two control periods were used:2009 (before and after the outbreak),and during April-May from 2007 and 2008.
RESULTS: During the outbreak total consultation at the ER increased six times compared with the 2007-2008 control period and 11 times compared with the 2009 control period. Pneumonia- or influenza-related ER consultations increased 23.2 and 15.3%, respectively. The rate of nosocomial infection during the outbreak was 13.6 and that of nosocomial pneumonia was 6 per/100 hospital discharges, a two-fold and three-fold increase compared to the control periods respectively.
CONCLUSIONS: During the outbreak,mean severity of admitted patients increased,with a rise in in-hospital mortality and nosocomial infections rate, including nosocomial pneumonia.

In April 2009, an outbreak of influenza occurred in Mexico. Among the strains detected during the epidemic, there was a novel pandemic influenza A strain (H1N1), an assortment of swine, avian, and human lineages.1-4 After a few weeks, the World Health Organization (WHO) declared a level 6 pandemic influenza alert for this, the first XXI Century influenza pandemic.5

Hospitals in Mexico City received an unusually high number of very sick patients with respiratory failure and high mortality, in addition to patients with pneumonia not requiring mechanical ventilation.6 But all of these patients overloaded referral hospitals. This manuscript aims to describe the increase in medical demand and hospitalizations during the epidemic outbreak of influenza in April and May 2009 at a referral hospital for respiratory diseases in Mexico City, the type of diagnosis associated with the outbreak, and the difficulties experienced. This may aid in understanding the demand for health care services and contribute to better preparation of hospitals for a new outbreak of influenza, or even for other epidemic respiratory diseases.

This report was determined to be exempt from the requirement for institutional review since it was conducted as part of a public health investigation into retrospective data. INER is the Mexican National Institute of Respiratory Diseases, a national tertiary-care and research center devoted to respiratory diseases. The 178-bed facility provides clinical services primarily for the uninsured population of Mexico City and neighboring states. The influenza outbreak period was defined as the period between April 1 and May 15, 2009. A full health alert in Mexico was issued on April 23, 2009, with all schools and public activities suspended until May 6, 2009. The number of Emergency room (ER) visits, hospitalizations, and other hospital indicators during the outbreak period were compared with two control periods. The first control period comprised April 1 to May 15, 2007 and 2008; hospital indicators for this period are an average of those observed during these two years. The second control period covered 22 days prior to April 1, 2009 (March 10-31) and 23 days after May 15, 2009 (May 16 to June 7), both also totaling 45 days. We reviewed daily hospital statistics and administrative data, and compared outbreak and control periods.

For the ER, information was abstracted on the number of ER consultations, both in general and for specific diagnoses made by the consulting physician and coded according to the 10th Revision of the International Classification of Diseases (ICD-10), including community-acquired pneumonia-influenza (P-I) or influenza-like illness (ICD-10 codes J09-J18), upper respiratory tract infections (ICD-10 codes J00-J06), and acute respiratory failure and other respiratory diseases (ICD-10 codes J95J98, and J99.8). We also analyzed the number of patients admitted to the ER and the mortality observed during the three compared periods.

For hospitalized patients, we analyzed the hospital discharge database to obtain the number of hospitalized patients in each compared period and the number of deaths observed both in general and for patients with the discharge diagnosis of community-acquired Pneumonia-influenza (ICD-10 codes J09-J18). Finally, we obtained the number of nosocomial infections of any type and of nosocomial pneumonias during the compared periods. Our analysis of P-I and other respiratory infections is based on diagnoses by the physician, whether or not the patient had a positive test for H1N1 2009 infection, by a real-time Reverse-transcriptase-Polymerasechain reaction (RT-PCR) test performed in accordance with published guidelines from the U.S. Centers for Disease Control and Prevention (CDC).7 The analysis compared the number of events during the period of the outbreak and each control period (2007-2008) and 2009. Incidence rates of consultations, emergency room admissions and deaths from all causes were calculated and compared using incidence rate ratios. Proportions were compared using Chi-square test. The same analysis was done for indicators of hospitalization. Data analysis was conducted with STATA statistical software.* 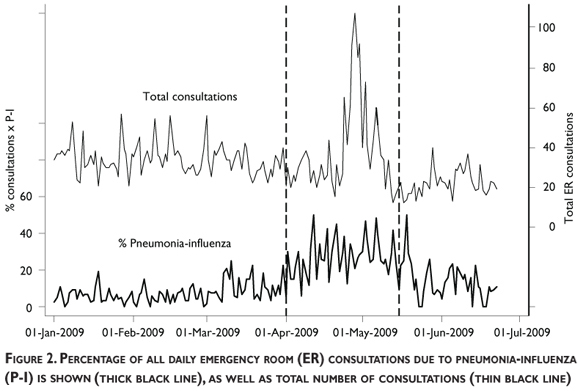 The outbreak period included 137 hospital admissions for P-I in 45 days compared with 50 in the 2009 control period and 29 in the 2007-2008 control period (Table 1). Figure 3 depicts the number of hospital beds occupied by day by patients with pneumonia and ILI. During the outbreak, we reached a maximum of 45 hospital-admitted patients with ILI and pneumonia, with 13 of these with endotracheal-tube mechanical ventilation. This was an impressive surge in the number of patients, as can be observed when compared with 2009 (p=0.03). During January and February 2009, more patients were hospitalized with pneumonia-influenza than during the corresponding months of 2007-2008 (P=0.03).

Nearly all of the patients (83.8%) cared for at INER reside in the Mexico City metropolitan area, and the proportion persisted in patients with P-I and did not change significantly during the compared periods.

The April-May 2009 influenza H1N1 epidemic resulted in an increased demand for hospitals able to receive patients with respiratory failure, such as the respiratory-diseases referral center source for this report. Patients with pneumonia and ILI require more care and infection control precautions than the more frequently observed patients with non-infectious chronic diseases, even during disease exacerbation. In addition, patients with ILI were often young and previously healthy, generating a great emotional impact on their families, but youth is a good prognosis sign for survival and rehabilitation compared with pneumonias occurring in older age with comorbidities from influenza like illness in control periods.

The number of hospital beds for patients with ILI and pneumonia was increased progressively by deferring elective surgical procedures and related consultations. Consequently, the average severity of admitted patients increased, with patients under mechanical ventilation being situated outside of the customary areas, i.e., intensive care unit (ICU); ER, and recovery room. Patients with P-I admitted to the hospital required isolation, standard and respiratory precautions,and one third of these, mechanical ventilation, with many more invasive interventions than patients usually admitted to non-critical areas. Patients on mechanical ventilation outside the ICU lacked specialized nursing to care for critically ill patients, at least on some shifts. Despite much higher compliance with hand washing and disinfection and use of face masks, hospital coats,and gloves, overall hospital mortality increased, as well as the rate of nosocomial infections. Compared to non-pandemic periods, case-fatality for pneumonia was slightly lower although non-statistically significant, maybe because the average age of patients with pneumonia during the pandemic was much younger[mean, ±standard deviation 44(±21.4), 66 (±27.5) and 50.7(±25.0) for pandemic period versus non-pandemic periods, respectively].

The burden of the epidemic was produced by all patients with ILI and pneumonia, and not only by the fraction of patients who tested positive for the novel H1N1 virus, who were the only patients counted officially by the WHO and in many countries. During the epidemic's peak, some patients did not provide a respiratory secretions sample for testing, or the sample provided was of poor quality or delayed. Our patients arrived at the ER on average 6 days after symptoms initiation,6 compared with 3 days in hospitalized patients reported in the U.S. by the CDC.8 On the other hand patients who tested negative for the pandemic H1N1 virus were similar in number than those who tested positive, and both were part of the same epidemic6 and in need of hospital care. Counting only confirmed cases produces an underestimation of the epidemic's extension and severity. It is known that up to 3.8 times more deaths may be attributable to an influenza epidemic than deaths certified as influenza or pneumonia.9 Some of these deaths are certified as cardiovascular or cerebrovascular,9 common causes of death in the population. At our hospital, we found no increase in pulmonary thromboembolism during the epidemic, but we do not often receive patients with other cardiovascular events, such as acute myocardial infarction or cerebrovascular accidents, because there are other hospitals specialized in cardiac and neurologic diseases in the city.

During the influenza outbreak, the total number of ER consultations increased, as well as the proportion of influenza-and pneumonia-related consultations (Figure 2). We found no increase in asthmatic crises or chronic obstructive pulmonary disease (COPD) exacerbations, nor an increase in visits of patients for other respiratory problems, except for upper airway infections, respiratory failure, and P-I. In hospitalized patients, the pattern was similar: an increase in admissions for P-I, but not for other diseases.

During the outbreak, a key part of the hospital response was the increase in beds for patients with respiratory failure who required mechanical ventilation. The hospital was obliged to convert a 30-bed ward for influenza treatment, including beds for mechanical ventilation. Having beds and ventilators comprises only one part of the requirements: also essential are trained personnel for all shifts, as well as medicines, protective equipment, and general supplies. Each of these requirements resulted in a bottleneck throughout the outbreak at different times. It is clear to us that during an influenza epidemic, one priority is to assign ICU beds to patients with influenza by halting elective surgery, because trained personnel, equipment, and supplies must accompany these standard beds. As a second step, and after displacing as many ICU beds as possible for patients with influenza, there follows expanding the number of beds with mechanical ventilators outside of the ICU, providing that we are able to resolve shortages in personnel, equipment, and supplies. Collaboration among neighboring hospitals provided aid in their receiving a small number of patients, although this procedure was questioned by the patients' relatives and was difficult to implement. Transfer of patients with influenza was difficult because they were frequently hemodynamically unstable and required vasoactive drugs and high respiratory pressures.

Our hospital had pandemic influenza plans in place since 2006 and in October 2008 we enacted a pandemic simulation drill only 6 months prior to the real pandemic, although the latter was not H5N1-associated. These preparations were helpful, but real exposure to the pandemic demanded a day-to-day awareness of unmet needs in medical supplies and drugs that built up a much more complete plan, which was again tested during the pandemic's second wave, which began in September 2009 and which doubled the initial demand for health care services produced during the first wave described herein. For this second wave oseltamivir was readily available, the personnel had acquired experience, and supplies were adequate and although the load of patients was bigger, the preparation for this second wave was better and the clinical care of these cases was almost routine.

In conclusion, the April-May 2009 outbreak of the influenza pandemic was accompanied by a large rise in the need for beds for patients on mechanical ventilation with trained proper personnel and supplies. The load was formed by pandemic H1N1-positive patients, as well as by those who were negative or not tested, all of them part of the same epidemic, which was significantly underestimated by counting only pandemic H1N1-positive patients. The nosocomial infection rate in this period increased probably due to the presence of a larger number of patients on mechanical ventilation and dialysis procedures.