Dear editor: Hereby, we send the results of a survey about the awareness that Human Papillomavirus (HPV) is a risk factor for the development of cervical cancer (CC) in a sample of women from the metropolitan area of Monterrey, Mexico (MMM). It is well known that chronic infection with HPV is largely associated with the development of CC and that screening with Pap smear allows the detection of women with high grade squamous intraepithelial lesions; however1 participation in the screening as well as willing to vaccination, undoubtedly depends on the awareness and knowledge that women have about HPV.

We conducted a street, face-to-face survey in women aged 18-80 years in eight malls in MMM. The survey was carried out only in those women who gave verbal consent. We used the same format previously reported by Wardle,2 briefly: women were first asked an open question; "With respect to CC, what do you think is its main cause?". This was followed by a question to recall risk factors of CC; "what, if any, are other causes of CC?". After that, women were asked a 'closed' awareness question: "Before this interview, were you aware of HPV?". The association between demographic factors and HPV awareness was analyzed with a binary logistic regression. SPSS version 10 was used for all the analyses.

A total of 1 494 surveys were collected. Characteristics of participants are showed in Table I. The average age was 35 years, the more frequent level of education was senior high school and the monthly incomes were in the range of 0-900 $ USD. Only 1.7 % cited HPV as the main cause of CC without prompting. This last finding is similar to 1.9% reported by Lazcano-Ponce and colleagues3 and suggest that there has not been much progress on awareness or knowledge of HPV in Mexico. On the other hand, 10.8% were aware of the importance of HPV in the development of CC. According to their age, youngest women (8.75%) and women over 55 years (15.8%) were the least and most aware about HPV respectively. According to their level of education women with senior high school were less aware (6.7%) and those with a degree were most aware about HPV (46.7%). 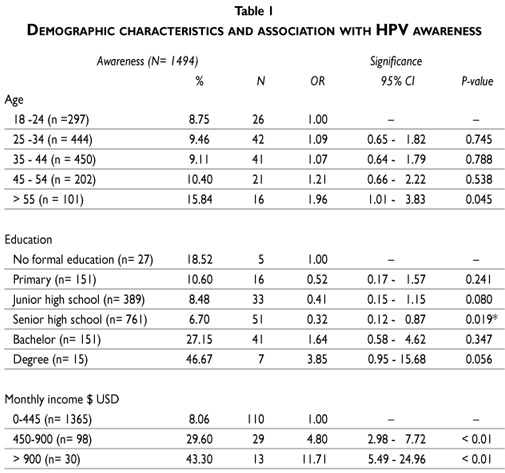 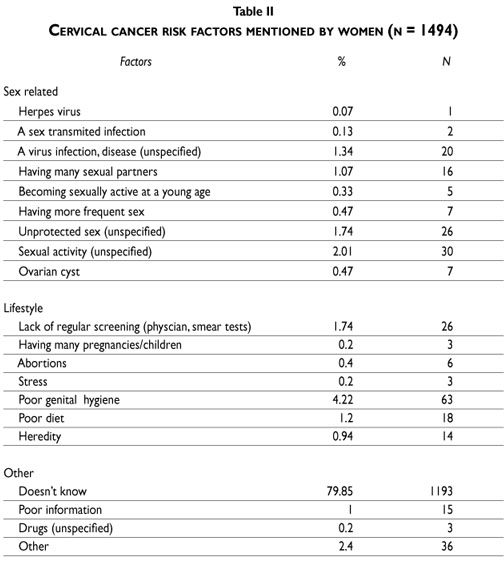 Although MMM is a large city with a large proportion of migrants from other states our results do not necessarily reflect the level of HPV awareness of all women in Mexico. This awareness could be very different due to differences in the level of education. Public education programs about HPV are needed and should reach women of all ages, specially those with no formal education.

The authors wish to thank Irma Y. Vega-Santiago, Herzon Alan Tovar-Cervantes and Moises Shabot-Szydlo for technical support and for conducting the surveys.