OBJECTIVE: To determine the effect of altitude of residence on influenza A (H1N1).
MATERIALS AND METHODS: We analyzed 207 135 officially notified of influenza-like illness (ILI) cases, 23 048 hospitalizations and 573 deaths during the first months of the novel pandemic influenza A H1N1 virus, to examine if residents of high altitude had more frequently these adverse outcomes.
RESULTS: Adjusted rates for hospitalization and hospital mortality rates increased with altitude, probably due to hypoxemia.

In a previous analysis, individuals living between 2 000 and 2 499 m above sea level in Mexico had a threefold increase in mortality due to pneumonia-influenza compared to people living below 500 m above sea level, after adjustment for poverty, age and gender.1 In this study, our objective was to examine the association between altitude of residence and rates of hospitalization and mortality, in cases of Influenza-like illness (ILI) and severe acute respiratory illness (SARI), during the first months of the 2009 pandemic influenza A H1N1 virus, to examine if residents of high altitude had more frequently these adverse outcomes.

Here we analyze the first 207 135 influenza-like illness (ILI) or severe acute respiratory illness (SARI) cases, notified to the Mexican Ministry of Health (Secretaríade Salud, SSa) system from 597 sentinel health units including out-patient clinics as well as hospitals from all 32 Mexican states between June and October 2009. Notified cases came from 1 746 of the 2 445 Mexican municipalities. ILI was defined as fever (>38ºC) with cough and headache plus one additional respiratory or digestive symptom.2 SARI adds to the ILI definition the presence of difficult breathing or acute respiratory failure.

Among these cases there were 23 048 hospitalizations (11%) and 573 deaths among those hospitalized (0.3%). During the same time period, an additional 24 858 cases were notified to the Health Ministry but were excluded from analysis because lacked municipality of residence. Notified cases increased progressively from May 2009, peaking at the end of September 2009 (major fall outbreak) and progressively descended in frequencyduring October. Laboratory confirmation, using the CDC protocol of real-time rTPCR for influenza A(H1N1), was available only for 12.5% of analyzed cases.

Several potential correlates of ILI severity were generated at the municipality level. Average altitude above the sea level of the municipalities (weighted by the population size of the communities) where cases resided was obtained from the official database of the National Institute of Statistics and Geography (Instituto Nacional de Estadística y Geografía, INEGI).3 In addition, for each municipality, we obtained a 2005 normalized social deprivation index, known as the Marginality Index, with five levels, developed by the Mexican National Population Council (Consejo Nacional de Población, CONAPO) using census indicators on the educational characteristics of the resident population, the type of economic activities of the work force and the household building characteristics and access to water supply and sewage.4 Also, using the 10% population sample from the 2000 Mexican census we obtained, for each municipality of case residence, the proportion of households using wood or charcoal for cooking. Finally, data on annual mean temperatures at the municipality level were obtained from isotherms developed at CONABIO (Comisión Nacional para el Conocimiento y Uso de la Biodiversidad).5

Multilevel logistic regression models were fitted to estimate the proportion of notified cases who were hospitalized, as well as the proportion of hospitalized cases that died (in-hospital mortality) as a function of several municipality and individual level predictors.6 Municipality level predictors included in the modeling were mean altitude and annual temperature, degree of marginality and the proportion of households using wood or charcoal for cooking. Individual level predictors entered in the two fitted models were age and gender. We only evaluated mortality in hospitalized cases because in the primary care units there was not active follow up of cases and the very few deaths that were recorded occurred during the patients visit to the unit. All analyses were performed using a commercially available statistical package (Stata v.10.0).

Mean age of analyzed cases was 23.0 years (standard deviation [SD] 17.6), with 39% of them being younger than 15 years and 3.5% were 60 and older. Half (51.9%) of cases were women, 11.1% were hospitalized, 92% received treatment with oseltamivir and one in five had at least one co-morbidity recorded, mainly diabetes and asthma. Intubation as a proxy of severe acute respiratory illness (SARI) occurred in 1.4% of the total notified cases, in 16.3% of hospitalized patients and in 42% of the patients who died.

The odds of hospitalization (table I), adjusted for covariates both at the municipality level (marginality, prevalence of use of wood or charcoal for cooking in households and annual mean temperature) and at the individual level (gender and age group), were found to be higher as the altitude of residence of ILI cases increased. Adjusted hospitalization rates also increased significatively with altitude of residence (figure 1), but also in cases residing in more marginalized municipalities, in municipalities with a higher proportion of households using wood or charcoal for cooking and in those with higher mean annual temperature (table I). 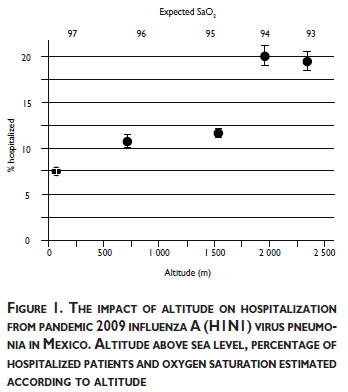 Table II depicts the odds of in-hospital death (adjusted by covariates) increasing with altitude of residence but reaching a plateau at the highest altitudes. Mortality was also associated to residence in a marginalized municipality but not with a higher use of wood or charcoal for cooking. Risk of hospitalization and death increased with age and in men compared to women.

In our analysis higher altitude of residence was associated with a higher risk of hospitalization in persons with ILI and SARI, during the 2009 influenza pandemic in Mexico in a monotonic way. Higher altitude of residence was also associated with a higher risk of death among hospitalized cases but this association seemed to reach a plateau at higher altitudes. Nevertheless, the number of deaths observed in hospitalized cases was relatively low and it is possible that we lack adequate power to evaluate the association between in-hospital mortality at the highest altitudes. Association persisted even after taking into account gender, age, and characteristics of the community such as mean ambient temperature, degree of marginality and use of biomass fuels.7

All reported cases were part of the influenza pandemic, although the virus was detected only in 40.9% of tested cases. Negative tests are known due to inappropriate sampling and delayed testing with reduced viral loads.8

Our findings are in agreement with other reports linking altitude of residence with severe lower respiratory infections,1,9,10 including influenza A H5N111 and are secondary basically to hypoxemia whose main determinant is altitude.12 A systematic review of the published literature showed that hypoxemia is a common and potentially lethal complication of acute lower respiratory infection in children less than five years of age, particularly among those with severe disease and those living at high altitude.13

According to our data in the presence of influenza and pneumonia, altitude increases the risk of severe respiratory outcomes and therefore, it is important to identify hypoxemia quickly, using an ear oximeter, and treat it with oxygen.