Association between light absorption measurements of PM2.5 and distance from heavy traffic roads in the Mexico City metropolitan area

Vehicular traffic is a major source of air pollution, in particular, nitrogen oxides (NOx) and particulate matter. various studies have suggested that vehicular exhaust traffic is associated with respiratory health effects.1-8 many of these studies obtained measurements near roadways in the vicinity of homes or schools, especially those with heavy vehicular traffic.

Some studies have concurrently incorporated air contaminant measurements with vehicular traffic counts.9,10 A study carried out by Brunekreef et al.11 in the netherlands reported that black smoke concentrations were correlated with the density of truck traffic and the percentage of time children were exposed downwind of the motorway. black or elemental carbon (BC-EC) originates mostly from incomplete combustion of fossil fuels and is the main factor in particle light absorption or light transmission (babs) , expressed in inverse megameters [Mm-1]) in ambient air. This measurement could therefore be a good indicator of exposure to vehicular traffic.

About 85% of air pollution in the Mexico City Metropolitan Area (MCMA) comes from mobile sources (emission estimates). One of the main pollutants is PM2.5, emission inventories in 2004 reported a PM2.5 emission of 6 622 ton / year, of which 56.6% comes from mobile sources: the 83.2% from diesel fuels and 16.8% from gasoline vehicles.12 The MCMA has carried out several studies to evaluate the composition of fine particles and their relationship to mobile sources.13-18 High concentrations of EC were observed in areas with heavy diesel vehicle traffic.

The toxicity of the particles is a subject of interest to both toxicological and epidemiological investigations.19 Elemental and organic carbon originating from vehicular exhaust have been recognized as likely being the most toxic components of the particles.20-22 This paper describes the relationship among PM2.5 babs(light absorption, babs), vehicle density, and the distance between the measurement location and roadways in different parts of the MCMA.

As part of the larger cohort of school children in Mexico City previously evaluated,23 we conducted local PM2.5 in public schools in three areas of the southeastern part of the MCMA (Iztapalapa, Iztacalco and Nezahualcoyotl) from June 2003 to June 2005.

The overall study population consisted of school children living in three Mexico City municipalities: Iztapalapa, Iztacalco and Netzahualcoyotl. These regions are characterized by high levels of traffic-related emissions. The present report includes data from a subsample of thirty-seven of the 107 schools (34.6%) attended by the children and were selected based on their distance to the closest roadways with heavy vehicular traffic (range: 24 -800 m). The study area was divided into four zones for local PM2.5 sampling: Iztapalapa-west, Iztapalapa-east, Iztacalco and Nezahualcoyotl (figure 1). Local PM2.5 babs were obtained at 20 (54.1%) schools: five in Iztapalapawest, six in Iztapalapa-east, four in Iztacalco and five in Nezahualcoyotl.

Battery powered Minivol portable samplers with flow rates of 5 liters/min using 47 mm teflon-membrane filters were used to monitor local daily 24-hour outdoor PM2.5 concentrations. Measurements was conducted for two consecutive weeks in two zones (the first 11 schools) and then rotated to the other two zones (the additional nine schools). Minivols were located on school rooftops (3 m) and care was taken not to place monitors < 90 cm from the walls and windows or close to plants or trees. each school was measured on average 14 times (range: 1-26) for two weeks during the period june 2003 to june 2005, for 20 months of monitoring.

PM2.5 babswas analyzed in a subset of Teflon filters (n=207, 11.5%) using transmission densitometry at the Desert Research Institute (DRI), Nevada, Usa. The transmission densitometry method measures optical density with an incandescent broadband lamp (400-650 nm, peaking at 575 nm) transmitted through a glass diffuser. Transmittance is measured before and after Teflon filter exposure, to determine particle babs and the difference in the logarithms of the transmitted light is proportional to the absorption of the particle deposit.24 These results were used as a marker of diesel engine exhaust.25 The transmission of "white" light through the teflon-membrane filter was measured before and after aerosol sampling to determine particle babs.26 Absorption measurement on the Teflon-membrane filters is highly correlated with elemental carbon (EC), measured with thermal/optical reflectance (TOR) analysis27 PM2.5 babs have been found to be highly correlated (r>0.86) with elemental carbon (EC), measured with thermal/optical reflectance analysis,27-29 babs measurements in this study serve as ec surrogate.

Traffic counts and distance from roadways

Design of the traffic count study was based on the following criteria:

B= Small buses for public transportation (gasoline or natural gas)

3. Traffic density: measured with pneumatic sensors every day for one week. The week selected was considered representative of traffic in that area. The average density of motor vehicles by type of vehicle, time of day, and day of the week was calculated for the study period.

A total of 51 roadway intersections distributed across the four study zones were measured. Nineteen out of the 51 intersections correspond to school locations selected for the babs analysis.

The distances between each selected school and the nearest to the main vehicular traffic roadways (mean: 224 m, range: 24 - 838 m) were measured by means of a geographic information system (GIS). Schools were represented by points (sampling locations) and roadways by lines in the GIS. Distances between points and lines were calculated using NEAR command, in ARCGIS.

We conducted a descriptive analysis for PM2.5 babs measurements by study zone, vehicular count and distance. We used Kruskal Wallis nonparametric test and a test for trend across ordered groups to evaluate the association between PM2.5 babsmeasurements and distance of the school to nearest major roadway. We also used generalized estimating equation models (GEE) to evaluate the association between distance to heavy traffic roads and the diesel vehicle counts on PM2.5 babs measurement (n=200). The predictor variables included in these models were distance between each selected school and the nearest heavy vehicular traffic roadway (m) and vehicle type C, D or E (1= >150 vehicles 0= < 150 vehicles). The pm2.5 babs (Mm-1) were log-transformed to achieve normality. The model was adjusted for the following variables: local PM2.5, average ambient NO2, minimum temperature, study zone, wind velocity, average relative humidity on the day that samples were taken and time trend. monitoring data were analyzed using the statistical software package STATA (version 9.2).

The largest proportion of vehicles (76%) consisted of private cars (transport type A); small buses for public transportation (transport type B) represented 15.3% of the vehicles. Transport types C, D and E--predominantly diesel vehicles--represented 8.7% of the hourly 24-h average (data not shown). On average, the distance from the school monitored to the closest roadway with heavy vehicular traffic was 175 m (SD = 147) (table I).

PM2.5 babs measurements were slightly higher (115.3 Mm-1) in the area of Iztapalapa east (table II and figure 2), which is the same area that presented a higher density of diesel vehicles (ratio gasoline/diesel=5.6). The highest PM2.5 babs were within the first 50 meters of the roadway with heavy vehicular traffic. The median of PM2.5 babs measurements was different between distance groups (p*= 0.06) and decreased significantly (test or trend p**= 0.02) with increased distance from the roadways from 50 to >250 (table III). Our multivariate model confirm the role of distance and the number vehicular using diesel as predictor of EC levels often adjusting for local PM2.5, average ambient NO2, minimum temperature, study zone, wind velocity, average relative humidity on the day the samples were taken and time trend (table IV). 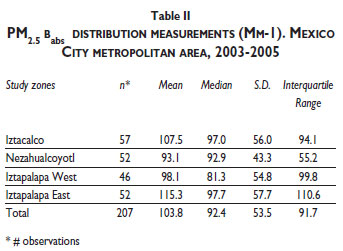 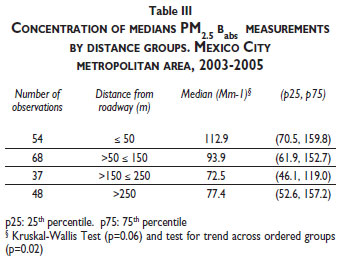 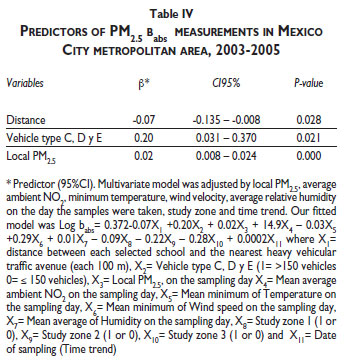 Our results suggest that, on average, the highest PM2.5 babs were within the first 50 meters of roadways with heavy vehicular traffic and that exposure to PM2.5 babs decreases (p<0.002) at distances greater than 50 meters. The results from the multivariate regression analysis suggest that PM2.5 babs measurements would increase by 20% (CI95% 3-38) when the hourly traffic count for type C, D and E vehicles increases by 150 vehicles per hour In addition, for each additional 100 meters from heavy traffic roads with high a percentage (>10%) of diesel vehicles, PM2.5 babs measurements would decrease by 7% (CI95% 0.9-14.0).

These results suggest that distance from heavy traffic roads and traffic intensity can be used as a surrogate for exposure to traffic-related EC in epidemiological studies, especially where diesel vehicles are present.

In our study, the PM2.5 babs measurements ranged from 14.9 to 222.4 Mm-1. These measurements were conducted in a very densely populated area (Iztapalapa east) and are higher than that reported by Vega et al.,30 however, Chow et al.17 have reported spatial variation of among areas in the MCMA, with the highest concentrations being in the eastern area, corresponding to our study area.

Compared to concentrations reported in other cities, our babs measurements are four to five times higher,31-33 suggesting poor quality diesel vehicles are driven and a significant fleet of vehicles emit diesel, producing a large amount of fine and ultrafine particles in the MCMA. Even though different studies used different methods for measuring carbon, high correlations have been observed among the different methods.28,34,35

Our results are concordant with other studies that reported that levels of EC emitted by vehicles increase proportionally to the distance from avenues or mobile sources of emissions.9,15,36-38 Consequences for public health are likely to be large given the adverse health effects observed in people living near roads with high traffic density. 5,6,8,11,33,39,40

This study suggests that PM2.5 babs measurements from diesel vehicles are significantly associated with distance to the motorway and traffic density. These variables can therefore be used to assess exposure to traffic-related EC in subjects living near motorways.

This study was supported by the National Center for Environmental Health at the Centers for Disease Control. Filter light transmission analysis was carried out by Desert Research Institute (DRI), Nevada USA. We are indebted to the Mexico City General Department of Environmental Monitoring and for all the data given to us from the automatic network system (RAMA) reading service.

The ethics committee of the National Institute of Public Health approved the research protocol which are the data analyzed in this article.

6. Weiland SK, Mundt KA, Rueckmann A, Keil U. Self-reported wheezing and allergic rhinitis in children and traffic density on street of residence. Am Epidemiology 1994;4:243-247.

19. Harrison RM, Yin J. Particulate matter in the atmosphere: which particle properties are important for its effects on health? Sci total Env 2000;249:85-101.

25. Wolff GT. Characteristics and consequences of soot in the atmosphere. Environment International 1985;11:259-269.