Objective. To provide descriptive information on the screen time levels of Mexican children.

Results. On average, children engaged in 3 hours/day of screen time, irrespective of gender and age. Screen time was higher in obese children, children from the northern and Federal District regions of the country, children living in urban areas, and children in the highest socioeconomic status and education categories. Approximately 33% of 10-14 year olds and 36% of 15-18 year olds met the screen time guideline of ≤2 hours/day.

The emergence of an obesity epidemic in Mexico has highlighted the importance of studying the behaviors that contribute to obesity which include excessive caloric intake and a lack of physical activity.1,2 Historically, research in the physical activity sciences focused on engagement in moderate-to-vigorous physical activity (MVPA), which is defined as activities where the energy expenditure level is at least three times greater than while at rest.3 Thus, physical activity has traditionally been assessed in a dichotomous manner such that someone was considered to be either "active" (above the MVPA threshold) or "sedentary" (below the MVPA threshold).

Physical activity research conducted in the last couple of decades has evolved. Physical activity energy expenditure is now considered along a continuum that ranges from light intensity activities to activities that are extremely vigorous.4,5 Recent research has emphasized that being "active" and "sedentary" are two distinct behaviors. Specifically, youth who engage in sufficient MVPA (e.g., 60 minutes per day), and by historical definitions would be considered quite "active", may engage in a limited amount of light intensity activities outside of their MVPA, and subsequently may also be quite "sedentary".5 Indeed, several studies have reported that the amount of time youth spend in MVPA is poorly correlated to the amount of time they engage in light intensity activities and their sedentary behavior level.6-8 Other studies have shown that excessive engagement in sedentary behavior predicts obesity and other physical and psychosocial health outcomes independent of MVPA.9-12

The type of sedentary behavior that has been studied the most is screen time.5,13 Screen time refers to a composite measure of how much time someone spends watching television, using a computer, and playing video games. Compared to other sedentary behaviors, such as sitting in the classroom, the amount of screen time that different children engage in is more variable and is under greater voluntary control. A recent systematic review of 232 studies reported that excessive screen time in children and adolescents is associated with obesity, decreased fitness, lowered self-esteem, poor social behaviors, and decreased academic achievement.13 In light of this evidence, public health guidelines from several countries recommend that school-aged children and adolescents accumulate no more than 2 hours of screen time per day.14-16 Data from Canada indicate that less than 20% of 11-15 year olds achieve this guideline and that the average daily screen time in adolescents is in excess of 6 hours.17 Findings from Columbia indicate that 44% of 5-12 year olds watch television and play video games for 2 hours/day or less.18 Data on 10-19 year olds from the 2006 National Health and Nutrition Survey (ENSANUT 2006) indicate that 60% of girls and 47% of boys in Mexico have average daily screen time levels of less than 2 hours.19 The purpose of this study was to provide current descriptive information on the screen time levels of Mexican children, based on the ENSANUT 2012.

ENSANUT employed a probabilistic multistage stratified cluster sampling design. For the 2012 cycle data from 50 528 households (89 000 people) was collected between October 2011 and May 2012. A detailed paper describing the methodology of the ENSANUT is published elsewhere.20 Data from 5 643 children aged 10-18 years was collected on screen time, representing 20 660 264 individuals. Data were collected at the participants' homes using a computer-assisted interview (10-14 year old children had help from a relative while responding). All participants or their parent/guardian provided informed consent prior to participating. The National Public Health Institute Ethics Review Board of Mexico approved the study protocol.

Screen time was defined as time spent viewing television, videos, or playing video games. Information on the number of hours per day children spent engaging in screen time was self-reported by the child participants during their interview. The screen time question included in the interview were based on the Youth Activity Questionnaire developed and validated in adolescents aged 10 to 14 from low and middle income populations in Mexico City.21 In the ENSANUT 2012, two questions were asked to assess screen time, one for weekday use and one for weekend use. These questions asked participants to report how many hours they usually spend in front of a screen, including watching television, movies, playing video games, and using a computer. A weighted average based on weekday and weekend use was used to calculate average daily screen time. Participants were then classified as meeting (average screen time ≤2 hours/day) or exceeding (average screen time >2 hours/day) screen time recommendations based on guidelines for other countries (e.g., U.S., U.K., Canada).14-16 At present, Mexican and/or global screen time guidelines do not exist.

While screen time was assessed in the ENSANUT 2006, the questions that were used were different than those used in 2012. Because of this comparability issue, we were not able to examine trends in screen time use.

A socioeconomic status (SES) index was constructed by combining eight variables that assessed the household properties and available services including: construction materials of the floor, ceiling, and walls; sleeping rooms; water accessibility; vehicle ownership; household goods (refrigerator, washing machine, microwave, stove, boiler); and electrical goods (television, radio, telephone, and computer). The index was divided into tertiles and used as a proxy for low, medium, and high SES. Education level was stratified into three groups according to the highest level of education obtained: 1) primary or less, 2) secondary, and 3) high school or higher.

Weight and height were measured to the nearest 0.1 kg and 0.1 cm during the household interview by trained research staff using SECA electronic scales and SECA stadiometers, respectively. The body mass index (BMI) was calculated as kg/m2. Children were classified as being non-overweight, overweight, or obese according to the age- and gender-specific BMI cut-points endorsed by the International Obesity Task Force.22

The sample design characteristics (sample weights, cluster and strata variables) were taken into consideration for all analyses. All analyses were stratified by age group (10-14 year olds, 15-18 year olds). Means, interquartile ranges, and percentages were used to describe the screen time levels and covariates of the sample. Screen time was described within the entire sample and by socio-demographic and anthropometric characteristics. The odds ratio for high screen time was determined using logistic regression models. Initially, bivariate logistic regression models were run separately for each sociodemographic variable. This was followed by a single multivariate model that simultaneously included all of the sociodemographic variables. 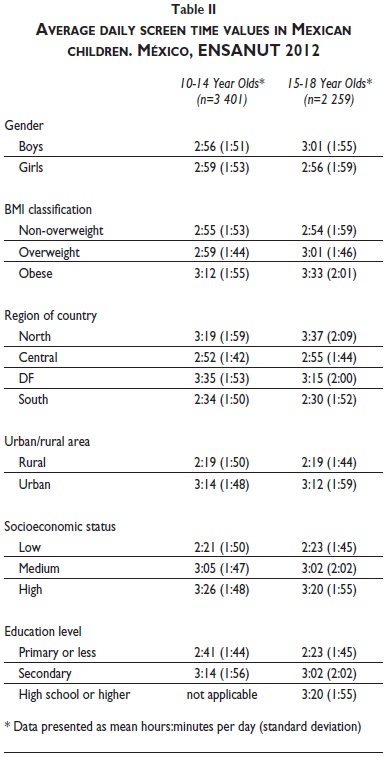 While the screen time levels in Mexican children are high, they do not appear to be as high as those observed in many other countries. For instance, a recent study based on data from the 2006 Health Behaviour in School-Aged Children Survey, an international study of over 200 000 children aged 11-15 years from 39 (mostly developed) countries across Europe and North America, reported that only 23% of children engaged in ≤2 hours per day of screen time.23 The prevalence value was below 30% in all regions studied (Canada and U.S., Nordic countries, British Isles, Central Europe, Baltic countries, Eastern Europe, and Southern Europe).23 As the Mexican population continues to progress through the nutrition24 and physical activity25 transitions and adopt lifestyle behaviors that are more typical of those seen in more developed countries, screen time levels in Mexican children may increase above the levels reported here for the year 2012. The less developed regions of the country may also catch-up with the North and DF, as has been observed with other risk factors for obesity and non-communicable chronic diseases.

Our finding that screen time levels were higher in obese children than in non-overweight children is consistent with previous findings in children from Mexico19 and several other countries.9-11 As demonstrated here for the 15-18 year old age group, others have shown that screen time predicts obesity independent of sociodemographic covariates, and also of other behaviors like diet and MVPA.9-11,19 This reiterates the notion that engagement in excessive screen time is a distinct and separate behavior from engaging in insufficient MVPA. Thus, in the battle to address the obesity epidemic, distinct interventions and policies will be needed for sedentary behavior and MVPA.5

Mexican children from urban areas accumulated about 1 hour per day more screen time than Mexican children from rural areas. This urban/rural gradient is consistent with previous findings in a representative sample of 5-12 years olds from Colombia.18 While this observation may in part reflect SES differences between people living in urban and rural areas, it is important to note that the urban/rural differences persisted after controlling for SES in the multivariate analyses. Children from urban areas likely have greater access to screen time technology (e.g., more options for buying televisions and more television channels available). Adolescents living in urban areas may also be exposed to more social and physical disorder in their neighborhood than children from rural areas are, and other studies have shown that increased neighbourhood disorder is related to increased engagement in screen time.30

A key limitation of this study that warrants recognition is the fact that the screen time data were self-reported using two questions. A previous reliability and validity study of similar screen time questions (that focused on television use) that was conducted in 10-14 year olds from Mexico City noted that the reproducibility of responses provided to screen time questions asked six months apart is modest (r=0.53) and that simple question measures of screen time are modestly correlated (r=0.51) to responses obtained using a more in depth 24-hour recall.21 Another important limitation is that we assessed all screen time measures together and did not measure individual screen time behaviors (e.g., television, computer use, video games).

In conclusion, 10-18 year old children in Mexico accumulate an average of 3 hours/day of screen time. The majority of Mexican children (about 65%) exceed the currently recommended maximal level of screen. Interventions and policies within Mexico aimed at addressing obesity should include components that focus on screen time.

29. Wang Y. Cross-national comparison of childhood obesity: the epidemic and the relationship between obesity and socioeconomic status. Int J Epidemiol 2001;30(5):1129-1136.

Declaration of conflict of interests. The authors declare that they have no conflicts of interest.