Suicide risk in female victims of domestic violence in Mexico

To the editor: The number of deaths by suicide in Mexico has increased in the past years becoming a serious public health issue.1,2 It has been identified that an unstructured family atmosphere can result in suicidal behavior. Perez and Garcia found marital problems as one of the most frequent reasons for suicidal behavior and it is considered that a dysfunctional marriage relationship is more suicide related for women than for men.3 Studies have shown that a fifth of women around the world are subjected to violence at some stage in their life and have twelve times more suicide attempts and high mortality rates compared with women who did not suffer from violence.4

We found that 58% of the women who were victims of domestic violence were at suicide risk, whereas 14% of the women in the control group were also at risk. Odds ratio test showed that women who suffered domestic violence were 8.48 times more likely to be at suicide risk compared with the control group (confidence intervals 2.81 to 25.59), as shown in table I. 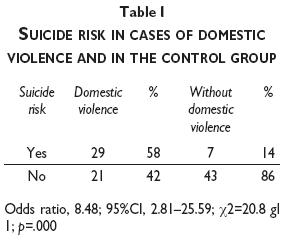 This leads us to believe that in Mexico there is an association between domestic violence and suicide risk. We consider this association to be as high as to reflect the need to generate an intervention in the health system that aims to protect women who have this vulnerability. Furthermore, these results are relevant for health professionals working with women in order to detect suicide risk in these women and generate proposals for prevention and intervention for battered women.

2. De la Roca-Chiapas J. Psychoanalysis and Epidemiology of suicide in the state of Guanajuato in the period 1997-2001. Reflections on youth groups. Public Health. 2008;50(1).