Incidence of type 2 diabetes in Mexico. Results of The Mexico City Diabetes Study after 18 years of follow-up

Objective. To estimate the incidence of type 2 diabetes (T2D) in Mexican population.

Conclusions. This is the first estimate of long-term incidence of T2D in Mexican population. The incidence is among the highest reported worldwide. It remained with few changes throughout the study period.

There is national consensus that type 2 diabetes (T2D) is a public health problem of the highest priority for Mexico. This is due to its high prevalence (14% of total adults), its morbidity and mortality. These facts are reflected in significant human and economic costs. In addition, there is an ominous future since the proportion of the elderly in Mexico is growing significantly and T2D in this age group occurs in 25-30% of cases.1-5

National health surveys suggest increments in the prevalence of T2D throughout the past three decades. If this is true, it could be the result of several factors, one of which might be that the increase in prevalence is the result of an increment in the incidence of T2D. Hence, to characterize appropriately the nature of the epidemic it is important to have estimates of the incidence of this pathologic condition. In the United States the estimated costs attributable to T2D were 245 billions in 2012, 41% higher than the previous calculation. In Mexico costs associated to T2D care are alarmingly (high and will increase). There is a need for evidence based scientific information that will be useful in the elaboration of an appropriate strategy in the construction of public policy. This is another area in which the estimation of the incidence of T2D will be of value.6,7

There is published information demonstrating that the prevention of T2D is possible.8-10 A baseline estimate of the incidence of T2D will aid in the evaluation of the potential effects of preventive strategies.

The Mexico City Diabetes Study (MCDS) is a population based, prospective investigation that was designed to estimate the prevalence, incidence and natural history of T2D and cardiovascular risk factors, in low income urban adults residing in Mexico City. The study began in 1989 with the identification of a homogeneous low income site. This was located in the delegación (borough) Álvaro Obregón. It encompasses six census tracts (áreas geoestadísticas básicas) defined by the Instituto Nacional de Geografía y Estadística. The following neighborhoods were included: Francisco Villa, Molino de Santo Domingo, Unidad Habitacional Molino de Santo Domingo, Liberales de 1857, Lomas de Santo Domingo and Real del Monte. After a complete household enumeration and comprehensive census of the entire population permanently living in the area (15532 inhabitants), we established that the eligibility criteria would be all men and non pregnant women, 35-64 years of age.

Community centers, worship places, schools, meeting sites and opinion leaders were visited in order to achieve the best response rates to the invitation to participate in the study. Efforts were made to maintain a high level of community trust in the trained personnel at the field and in the staff that conducted the interviews and examinations.

At baseline (1989-1990), a total of 3319 subjects were interviewed and 2282 examined (from a total of 3505 eligible individuals). The final cohort was composed of 941 men and 1 341 women. We identified a total of 343 (15%) subjects with prevalent diagnosis of T2D, of which 179 (52%) were individuals that self reported they had T2D. We established that in order to consider them truly as patients with T2D, they must have been diagnosed by a physician and be under pharmacological therapy for diabetes (oral agents and/or insulin therapy), regardless of their glycemic values. In 164 (48% of prevalent cases) we diagnosed T2D as a result of the survey. These subjects were unaware of their diabetic condition. Therefore the population at risk was 1 939 non-diabetic participants. In the second follow-up, approximately four years later, 2055 from the original cohort were interviewed and 1773 participants were examined (717 men, 1056 women). A third follow-up, performed also approximately four years latter, included 2093 interviewed and 1594 examined individuals (647 men, 947 women). The fourth follow-up, performed during 2008, included 1253 participants that were interviewed and 1174 examined (462 men, 712 women).

Home interviews were attempted in all eligible subjects. The questionnaire contained items to determine the presence of previously diagnosed T2D, and of cardiovascular risk factors, such as: overweight, obesity, hyperlipidemia, hypertension, tobacco use, physical activity, diet and self-care.

After the home interview, participants were invited to a clinical and laboratory examination. All subjects were asked to arrive to the clinic with 12 hours of fasting prior to the exam. Informed consent was obtained from all participants in accordance with the ethical principles for medical research involving human subjects. The institutional review boards of the Centro de Estudios en Diabetes and the Instituto Nacional de Salud Pública approved the protocol.

Each evaluation was performed in a standardized manner; participants were examined in a disposable gown and no shoes. Anthropometry included: height, weight, waist and hip circumferences, tricipital and sub-scapular skin folds. Blood pressure (BP) was measured three times, using a calibrated random zero sphygmomanometer, in the sitting position after 5 min of rest, the mean of the last two readings was used.13 In all phases of the study, an oral glucose tolerance test, using 75 gr of glucose load was performed, fasting and 2 hours insulin, and lipids profile were obtained.

The laboratory used standardized protocols to measure metabolic variables. The results of the clinical and laboratory evaluation with medical interpretation and recommendations were delivered to every participant. International diagnostic criteria were applied. T2D was defined as the American Diabetes Association recommends:14 Fasting glucose ≥126 mg/dl, and/or 2 hours glucose ≥ 200 mg/dl or when a participant self reported having been diagnosed by a physician and was on medication for type 2 diabetes, regardless of the blood glucose found in the laboratory result.

When a participant was found to be deceased and the death certificate stated that he or she was diagnosed as T2D and we had not previously diagnosed him or her we accepted the diagnosis.

Hypertension was diagnosed using the Joint National Commission on Detection and Evaluation of Hypertension (JNC VII) diagnostic criteria.15 Participants who self-reported having been diagnosed by a physician as hypertensive and were taking antihypertensive medications were considered hypertensive, regardless of the blood pressure value obtained. Every effort was made to obtain an interview with questionnaires, physical examination and laboratory tests.

During every phase of the study, efforts were made to determine the vital status of all study subjects, (even non responders). In all the deceased subjects, we tried to obtain a death certificate. When this was not possible we attempted a formal "verbal autopsy", as a surrogate of the death certificate.

The estimation of person-years was made by the contribution of time in the study of all participants, even those who refused at some point to continue in the investigation. We consider that the amount of time contributed by each person that refused to continue ended at the time they expressed that decision. Participants who died contributed with time until the date of death, stated in the death certificate, or informed by family members.

Statistical analysis was performed using STATA 11.0 package.* It consisted on descriptive statistics, estimation of every numeric variable, considering mean and standard deviation by gender and age group. Variables were analyzed with parametric and non-parametric tests depending on their distribution.

Table I shows the results of the response rates observed throughout the study period by gender. The participation rate decreased progressively due to losses (n=62, 2.7%), deaths (n=321, 14%) or clinic non-responders (n=327, 14.3%).

All incident cases were diagnosed by oral glucose tolerance test except for 12 individuals in which T2D was diagnosed by death certificate (3.08% of the incident cases). Verbal autopsy was performed but we did not identified cases of T2D with this instrument.

Table III represents, in percentiles, the distribution of age at diagnosis of our studied subjects. It shows that 25% of the T2D cases were diagnosed either at or before 43.5 years old. We present a comparison by percentile between incident and prevalent cases. The entire age distribution tends to be younger in prevalent cases. Fifty per cent of incident diabetic subjects received their diagnosis being 10 years older than subjects classified as prevalent at baseline. 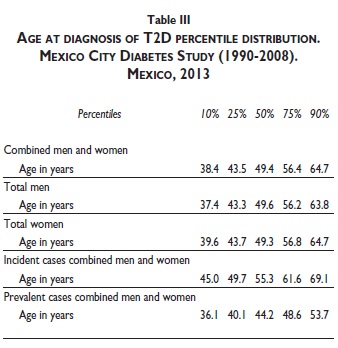 In figure 2 we present selected publications in which incidence of T2D is informed, expressed in person-years, and representing several populations and ethnic groups. It is shown from the highest to the lowest reported incidence. We include these publications based on comparable methods. It can be noted that our results occupy the seventh position among the studies selected.16-21

This is the first investigation in Mexican population designed to obtain an estimate of the long term incidence of T2D. The data presented demonstrates that a significant proportion of individuals (25% of subjects with T2D) have a clinical presentation at younger ages. This "early onset" T2D has been identified previously and coincides with an estimate of 25% of the entire T2D population.22 The experimental design of the study has to be taken into account in order to interpret the interactions of the concepts of age at diagnosis and age of entry to the study. This is the reason why prevalent cases are older at the entry phase and younger at the age of diagnosis when compared to incident cases.

The fact that we found relatively stable incidence throughout the study, should be taken with caution, because by design, our investigation initiates in a group of subjects in which, though were relatively young, we could have missed an increment in the incidence within the younger of them (less than 35 years of age). The fact that we found a decrement from 15.7 to 12.7 per 1 000 person-years in the last phase of our investigation suggests that the survival of the healthiest, with lesser risk to T2D, might be expressed with lower incidence rates in this age group.

The comparison with the incidences reported in other populations, sheds light in the study of the phenomenon. The highest reported incidence, by person-years, corresponds to Pima indians. These comparisons demonstrate that the Mexican population is situated among the high incidence levels of T2D worldwide16-21 (figure 2).

The group that studies the Pima indian population reported no increment in the incidence of T2D through three follow-up periods. They found the following incidences: 25.3 (1965-1977), 22.9 (1978-1990) and 23.5 (1991-2003) cases per 1 000 person-years respectively.16 Although these incidence rates are considerably higher than those obtained in our study, both investigations coincide in the fact that incidence rates have remained relatively stable throughout the long period of observation. It should be noted that the incidence obtained in our investigation is higher than the reported in non Hispanics whites.23

These findings are even more significant if we consider the results of a study done in a cohort of men followed for 23 years in England. In that investigation the incidence of T2D increased from 2-4 cases to 9-11 cases per 1 000 person-years in the last period of observation. Authors conclude that this increment was due to the increase in weight of the population.24 This should be an alert signal, if we considered the rapid pace at which the obesity epidemic is occurring in Mexico.12,25 Other researchers found that the incidence of T2D was higher in low income subjects compared to high income individuals (20.4 vs 9.2 cases per 1 000 person-years).26 Whereas weight gain and poverty have a promoting effect, inducing higher incidence of T2D, as evidenced by these studies, the Mexican population is at risk of reaching even higher incidence rates.

The limitations of the metric used to estimate the incidence of T2D in any given population (person-years) should be recognized. It assumes a uniform risk throughout the follow-up period. Also, a population-based study with a long follow-up period is susceptible to selection bias. Despite these limitations, this approach is useful and valid for international comparisons and the assessment of the dynamics of the phenomenon.

The evidence from this research provides data of potential use in the development of new strategies of interventions directed to the earliest phases of T2D with focus in the younger age group.