Higher levels of stress can lead to a series of negative consequences such as depression and suicide.2 Physically active people are not only less sensitive to negative influences of daily stress, but are also less responsive to physical stress.3 Among stress-coping activities, physical activity (PA) has been shown to be beneficial to both physical and mental health and has been regarded as an effective method to prevent stress-related diseases.4 Thus, helping elderly people who do not have established patterns of PA to acquire healthy habits for increasing PA is useful in terms of public health.

This study used national data from the fifth Korea National Health and Nutrition Survey (KNHANES-V) in 2010 and 2011 to investigate whether the level of PA is associated with perceived mental stress (PMS) status in elderly Korean people. KNHANES-V was conducted using a systematic stratified cluster sampling design. 2 837 elderly people aged over 65 years were selected for this study sample.

Participants were asked to rate their PMS status as very high, high, low, and none. Questions of PA information were compared with the guidelines of the American College of Sports Medicine.5 Information regarding the gender, age, education, family socio-economic status, and marital status of each participant was collected as confounding factors during interviews. 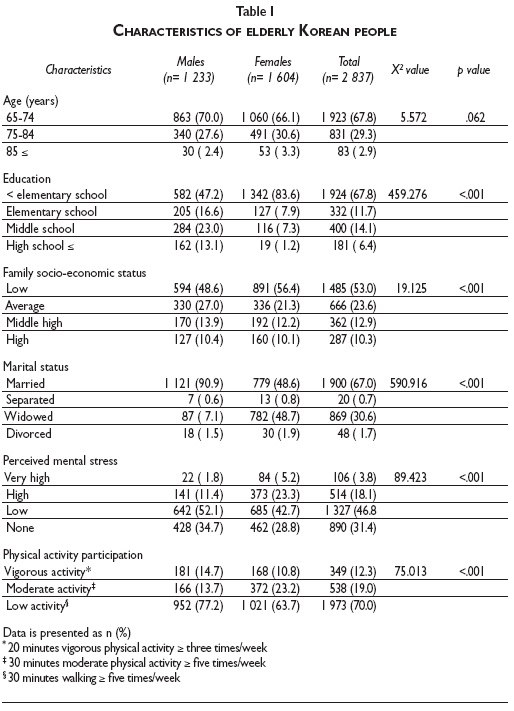 We note that when elderly Korean people perceived very much mental stress, they did not perform vigorous and low PA recommendations in the present study. These results indicate that better PMS is associated with higher vigorous and low PA in Korean elders. Highlighting that physically active people report better mental health may be a useful adjunct to encourage people to maintain and increase their levels of PA.6,7 Therefore, from a public health perspective, it is also important to consider environmental factors associated with participation in PA levels in Korean elders.