To determine the frequency of central nervous system (CNS) tumors in the first fifty years of the National Institute of Neurology and Neurosurgery of Mexico Manuel Velasco Suárez (Instituto Nacional de Neurología y Neurocirugía de México, INNN) from 1965 to 2014.

A total of 16 116 institutional records of CNS tumors were analyzed. The frequency and distribution of CNS tumors were evaluated by tumor type, patient age and patient gender. The annual relationship between CNS tumors and surgical discharges (SD) over the last 20 years was estimated.

The frequencies of most CNS tumors were consistent with those found worldwide, and the most common tumors were neuroepithelial tumors (33%), particularly astrocytic tumors (67%); meningeal tumors (26%); and pituitary tumors (20%). The incidence of pituitary tumors in these data was twice as high as that reported in other regions of the world, and the relationship between CNS tumors and SD was consistent over time (0.22-0.39).

This study summarizes the largest sample of CNS tumor cases analyzed in Mexico and provides an important reference of the frequency of this tumor type in the country. This work will serve as a basis for conducting studies evaluating factors associated with the presence of CNS tumors and for identifying adequate public health interventions.

The exact frequency, age and gender distribution, as well as trends in CNS tumors, in Mexico are unknown. This lack of information makes it difficult to provide inferences about the etiology, the associated risk factors and the magnitude of the health problem that these diseases cause for the purpose of establishing appropriate public health strategies.

The present study analyzes a large number of CNS tumor cases over a period of fifty years in the INNN, a reference hospital center in Mexico where this type of cancer is one of the leading causes of morbidity and mortality. 1515. Velásquez-Pérez L, Núñez-Santes A, Contreras-Cortés GA. Overview of hospital mortality at the National Institute of Neurology and Neurosurgery of Mexico City. Gac Med Mex 2009;145(5):369-374. Here, we describe the types of CNS tumors and the age and gender distributions of patients with CNS tumors and estimate their relationship with surgical discharges over the last 20 years to understand trends in this cancer over time.

This was a descriptive and retrospective study. Data on CNS tumor frequency were obtained from records from 1965 to 2014 that existed in the clinical records of the Pathology, Neurosurgery and Epidemiology Departments (files) of the INNN. These records contained information on patients' demographics, histological diagnosis and clinical characteristics, and the consistency of information contained within them was corroborated.

CNS tumors were grouped based on the existing international classifications from 1965 to 2014, as follows: 1) Bailey and Cushing1616. Bailey P, Cushing HW. A classification of the tumors of the glioma group on a histogenetic basis with a correlated study of prognosis. Philadelphia, PA: J. B. Lippincott, 1926. (from 1965 to 1978), which included tumor histogenesis and took into account tumor types, such as medulloblastoma, astroblastoma, ependymoma and spongioblastoma (subsequently referred to as glioblastoma multiforme); 2) Zülch1717. Zülch KJ. Histological typing of tumours of the central nervous system. Geneva: World Health Organization, 1979. (from 1979 to 1992), whose grouping considered criteria related to the prognostic evaluation of cases; and Kleihues and colleagues1818. Kleihues P, Burger PC, Scheithauer BW (eds). Histological typing of tumours of the central nervous system. World Health Organization international histological classification of tumours. Heidelberg: Springer, 1993. (from 1993 to 2014), a categorization that introduced immunohistochemistry into the diagnosis and in which the tumor types identified by Bailey and Cushing as gliomas were distributed into specific groups. CNS tumors were identified based on the 2007 World Health Organization (WHO) classification of tumors of the central nervous system, 1919. Louis DN, Ohgaki H, Wiestler OD, Cavenee WK (eds). WHO Classification of tumours of the central nervous system. Lyon: IARC, 2007. except for gliomas, pituitary adenomas (which are currently considered in an independent classification) and metastatic tumors.

Men and women aged 15 to 96 years with a confirmed histopathological diagnosis of CNS tumor who had a complete clinical record were included in the study. Cases of patients with recurrent cancer were excluded.

The INNN Research and Ethics Committee approved the present study. The data obtained from clinical files were treated with utmost confidentiality, preserving the patients' right to privacy.

CNS tumors identified between 1965 and 2014 were grouped according to the 2007 WHO classification of CNS tumors, and their relative frequencies were determined. Subsequently, CNS tumor frequencies were analyzed in three periods, according to classifications used from 1965 to 2014, and the percentages were compared using the Chi square test to identify differences between the proportions.

The distribution of CNS tumors was described by both gender and age quintiles from 15 to 79 years, including an extra category for subjects aged 80 years and older. Age group stratification was created using equidistant categories, 2020. Choi BCK, de Guia NA, Walsh P. Look before you leap: stratify before you standardize. Am J Epidemiol 1999;149:1087-1096. which included the wide spectrum of ages at tumor presentation. The incidence rate of tumors of neuroepithelial tissue from 1995 to 2014 was analyzed, and the annual proportions of CNS tumors and overall surgical discharges (CNS tumors/SD) and their 95% confidence intervals were arbitrarily calculated from 1995 to 2014 using surgical discharge records dating back to 1995. This information was coded and included in a database for analysis using the Statistical Package for the Social Sciences (SPSS version 20, IBM Corp. Armonk, NY.).*Declaration of conflict of interests. The authors declare that they have no conflict of interests.

Between 1965 to 2014, 16 116 patients with CNS tumors were treated in the INNN. However, 3 320 of those patients had recurrent tumors, an uncertain diagnosis or an incomplete clinical record and were excluded from the study.

The frequency of CNS tumors was similar with regard to gender (women, n=6 633, 52.6%; men, n=5 977, 47.4%). However, there was an indication of gender predominance with specific tumors, including germ cell and neuroepithelial tissue tumors, which were more common in men than in women, while meningeal tumors were more common in women than in men (figure 2).

Thumbnail
Table II
Percent frequencies of central nervous system tumors from 1965 to 2014 in the Mexican National Institute of Neurology and Neurosurgery, grouped based on the Bailey and Cushing, Zülch, and Kleihues and colleagues classifications*

The number of CNS tumors seen in the INNN increased over time, although the CNS tumors/SD relationship did not considerably vary (figure 3). However, this increase does not necessarily reflect an increase in the incidence of CNS tumors in the general Mexican population, as this trend could be associated with a gradual increase in the number of patients treated at the institute, which is the largest national reference center for patients with neurological conditions. 2121. Secretaría de Salud. Comisión Coordinadora de Institutos Nacionales de Salud y Hospitales de Alta Especialidad. Informe de actividades 2010-2012. México: Secretaría de Salud, 2012.,2222. Celis MA. Medicina. In: Arriaga-Mendicoa N, comp. México: Instituto Nacional de Neurología y Neurocirugía Manuel Velasco Suárez, 2014. Other factors, including the introduction of innovative diagnostic technologies in the 1970s and 1980s using computerized axial tomography and magnetic resonance2323. Coleman L. Magnetic resonance imaging of the supratentorial brain. Geisinger Bull 1987;36:33-40.

The differences in the distribution of CNS tumors in the three study periods are likely related to the lack of inclusion of lymphoma cases in the first two periods. The decrease in the frequency of tumors classified as "others" reflects a better categorization and knowledge of these tumors (table II).

In general, the low variability with regard to CNS tumors/SD from 1995 to 2014 suggests that the number of CNS tumor cases has not increased in recent years. However, it is necessary to conduct multicenter epidemiological studies that are representative of the Mexican population and that would allow for the incidence rates of these diseases to be determined.

The primary limitation of the present study is that its results cannot be extrapolated to the general Mexican population, in spite of the fact that the included patients come from various parts of the country. However, our results are noteworthy because the INNN is a neurological reference center in which 90 000 consultations are made yearly, 2121. Secretaría de Salud. Comisión Coordinadora de Institutos Nacionales de Salud y Hospitales de Alta Especialidad. Informe de actividades 2010-2012. México: Secretaría de Salud, 2012. yielding a large number of CNS tumor cases, which is the first or second leading cause of morbidity and mortality in this population. 1515. Velásquez-Pérez L, Núñez-Santes A, Contreras-Cortés GA. Overview of hospital mortality at the National Institute of Neurology and Neurosurgery of Mexico City. Gac Med Mex 2009;145(5):369-374.

Our results reflect the technical and caregiving capacity of the INNN with respect to CNS tumors and contribute to the evidence regarding the frequency of CNS tumors in developing countries and in other similar hospital centers worldwide. Future studies regarding factors associated with CNS tumor development should be conducted in Mexico.

Thanks to the Clinical Records, Pathology, Neurosurgery and Epidemiology Departments, to the Mexican Council for Science and Technology for the grant awarded to Mauricio Martínez Moreno, and to Dr. Isaac Acosta Castillo for his help in the statistical analysis of the results. 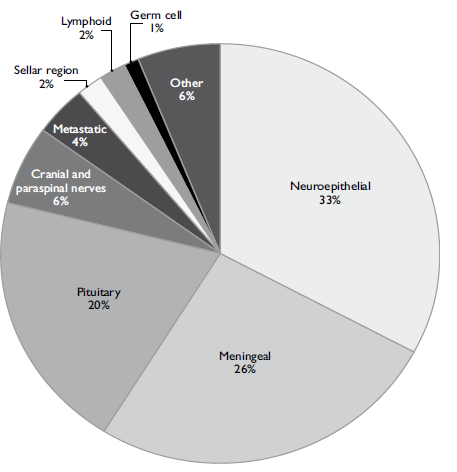 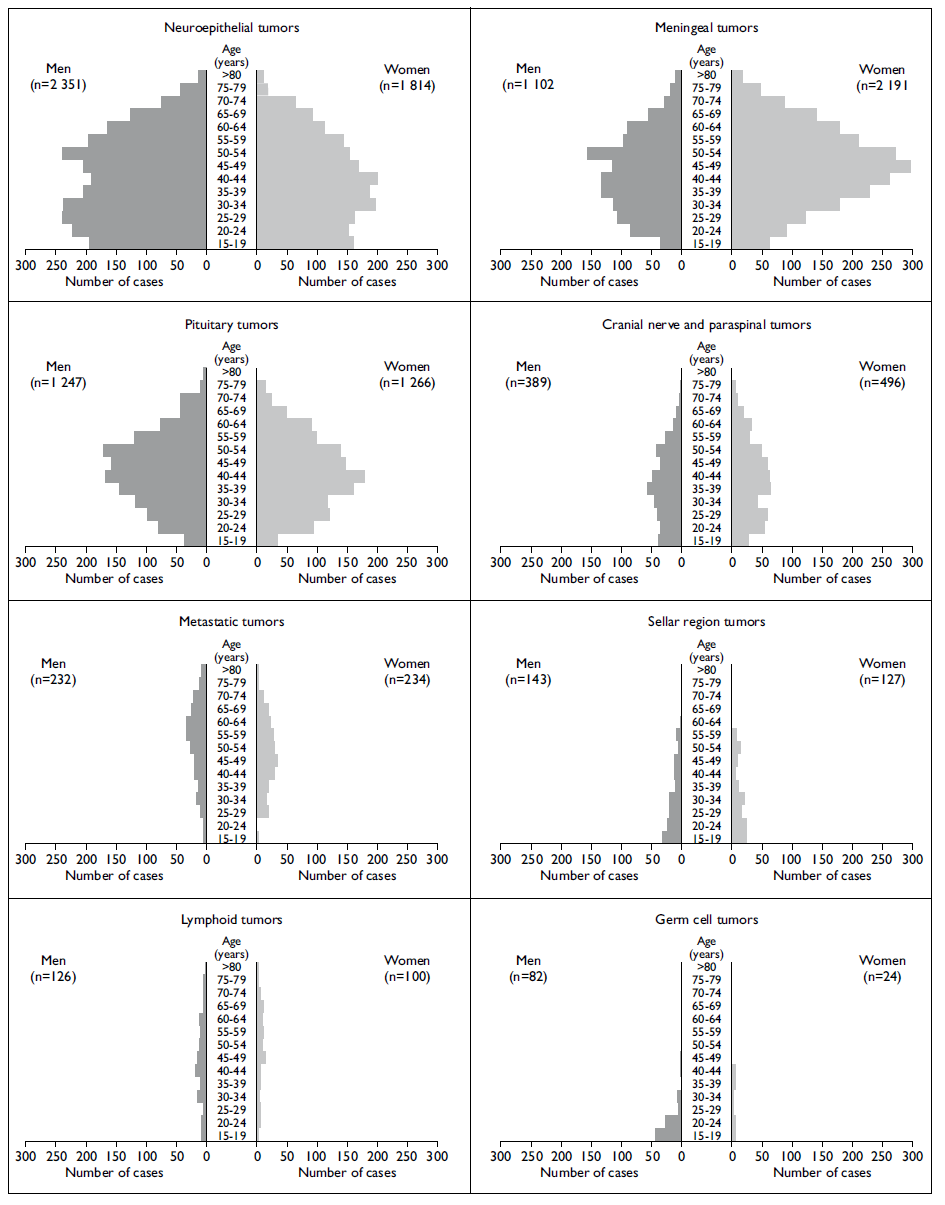 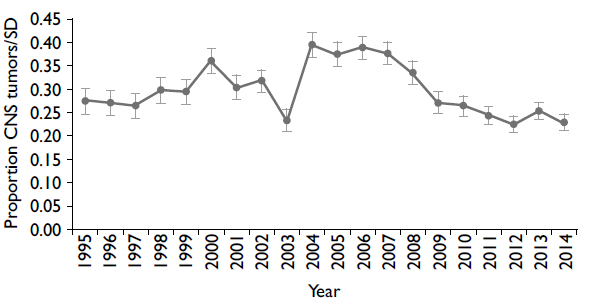 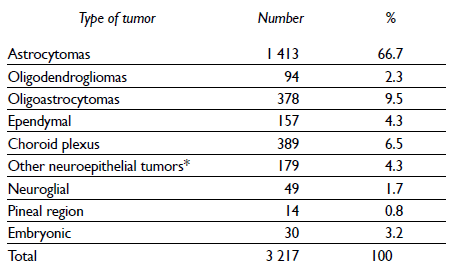 Table II   Percent frequencies of central nervous system tumors from 1965 to 2014 in the Mexican National Institute of Neurology and Neurosurgery, grouped based on the Bailey and Cushing, Zülch, and Kleihues and colleagues classifications* 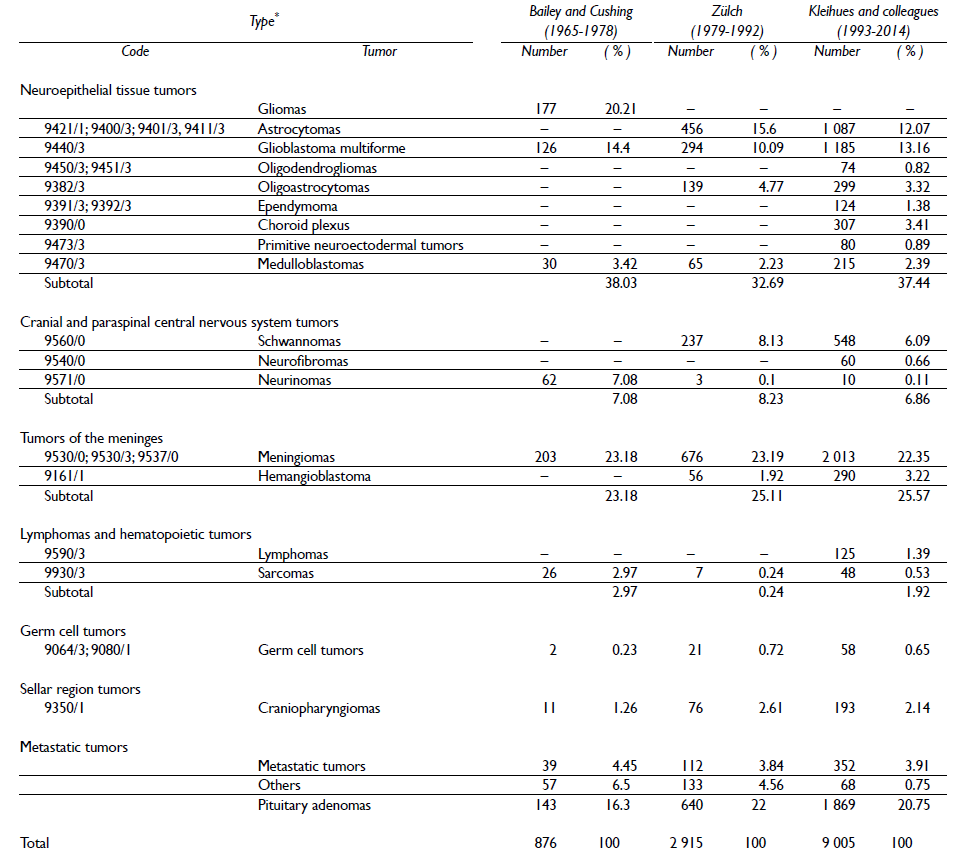