Streptococcus pneumoniae: distribution of serotypes and antimicrobial susceptibility in patients with cáncer

*Group of hospital institutions participating in the passive laboratory surveillance of infections caused by Streptococcus pneumoniae in Mexico (see acknowledgments).

To describe the distribution of pneumococcal serotypes causing infectious diseases in patients with hematological malignancies and solid tumors and their antimicrobial susceptibility before and after introduction of pneumococcal conjugate vaccine (PCV7) in Mexico.

Consecutive pneumococcal isolates from hospitalized patients from the SIREVA-network were serotyped using the Quellung reaction and antimicrobial susceptibility was performed using the broth microdilution method.

An increase in non-vaccine types is observed without significate changes in antimicrobial susceptibility after introduction of PCV7.

In Mexico, the Program of Specific Action of Cancer in Infants and Adolescents estimates 5 000 new cancer cases in persons <18 years of age with an accumulated incidence for years 2008-2013 of 9.4/100 000 affiliated to the Seguro Popular being the main mortality cause in children from 1-14 years of age.22. Secretaría de Salud. Programa Sectorial de Salud 2013-2018. Cáncer en la Infancia y la Adolescencia. Mexico City: SSa, 2014. For adults >20-80 years of age, morbidity rates for 2013 ranged from 94 to 769.4/100 000 with a mortality rate of 13.6% of the total population. Immunization with the heptavalent pneumococcal conjugate vaccine (PCV7), which protected against serotypes 4, 6B, 9V, 14, 18C, 19F and 23F, began in early 2006 when this vaccine was applied gradually only in the municipalities with the lowest human development indices. In 2008, the application of this vaccine was universalized among the population under the age of one year. During the period from 2008 to 2010, PCV10 (PCV7 serotypes + 1, 5 and 7F) was introduced with a three-dose schedule to the pediatric population insured by the Instituto Mexicano del Seguro Social (IMSS), which attends half of the population. Since 2011, PCV13 (PCV7 serotypes + 1, 3, 5, 6A, 7F and 19A) has been used in a 2-, 4- and 12-month schedule as part of the universal immunization.33. Consejo Nacional de Vacunación. Manual de Vacunación 2008-2009. Mexico City: SSa, 2008. PCV7 is no commercially available anymore. Pneumococcal polysaccharide 23-valent vaccine (PPV23) is included for all adult population >65 years of age or >60 years with any risk factor as a single dose, although coverage is limited.

In 1993, Mexico along with six other Latin American countries formed the Sistema Regional de Vacunas (Sireva) project coordinated by the Pan American Health Organization,44. Di Fabio JL, Homma A de QC. Pan American Health Organization epidemiological surveillance network for Streptococcus pneumoniae. Microb Drug Resist. 1997;3(2):131-3. https://doi.org/10.1089/mdr.1997.3.131
https://doi.org/10.1089/mdr.1997.3.131... and since that time, pneumococcal isolates from patients, children and adults with invasive and non-invasive diseases from 16 hospitals in 12 states, have been sent with demographic data to the Instituto Nacional de Salud Pública (INSP) in Cuernavaca, Morelos, México. As part of this passive laboratory surveillance, a retrospective observational study of consecutive pneumococcal isolates was conducted from patients with diagnosis of cancer. Two periods were considered: 1994-2007, before the introduction of PCV7 (pre-PCV7); and 2008-2016 (post-PCV7), after the introduction of PCV7. S. pneumoniae isolates from children, adolescents and adults were separated in two sub-groups: patients with diagnosis of hematological malignancies: acute lymphoblastic leukemia (ALL), acute myeloid leukemia (AML), lymphomas and myelomas; and patients with solid tumors. Invasive pneumococcal disease (IPD) was defined by the isolation of S. pneumoniae from blood and/or cerebrospinal fluid (CSF). Community acquired pneumonia and complicated pneumonia were defined for those patients with clinical diagnosis of pneumonia and positive culture for S. pneumoniae as a single culture from pleural fluid and/or bronchoaleveolar lavage. Other sites of isolation included middle ear, peritonitis, arthritic fluid and eye discharge.

Once in the laboratory, pneumococcal isolates were re-identified by standard procedures that included tests for bile solubility and optochin sensitivity. Pneumococcal isolates were serotyped by the Quellung reaction with type- and factor-specific antisera (Statens Serum Institut, Copenhagen, Denmark). Antimicrobial susceptibility tests for penicillin, cefotaxime, vancomycin, erythromycin, chloramphenicol and trimethoprim/sulfamethoxazole (TMP/SMX) all from Sigma-Aldrich, (St Louis MO,US) were performed by the broth microdilution method to determine the minimum inhibitory concentration (MIC) and clinical interpretation according to the procedures of the Clinical and Laboratory Standards Institute (CLSI) using cation-adjusted Mueller-Hinton broth (CAMHB) supplemented with 3% lysed horse blood. Interpretative criteria were differentiated for meningitis and non-meningitis isolates to penicillin and cefotaxime according to CLSI. S. pneumoniae ATCC 49619 was used as the control strain.55. Clinical and Laboratory Standards Institute. Performance Standards for Antimicrobial Susceptibility Testing; Twenty-Third Informational Supplement. CLSI document M100-S23. 2014. Wayne, PA: CLSI, 2013.

An analysis was carried out comparing age and type of tumor. A second analysis was performed comparing pneumococcal serotypes included in the PCV with type of tumor, age and pre- and post- vaccine periods, both with chi-square test. All the analyses were performed using SPSS version 20. p-values ≤0.05 were interpreted as statistically significant.

The study was submitted for ethical approval and it was exempt by the Research Ethics Committee at the INSP considering it was performed with S. pneumoniae isolates that resulted from standard microbiological diagnostic procedures as requested by the treating physician. No additional biological specimens were taken for the purpose of this study. Specimens were anonymized and only data on year and month of birth, sex, type of specimen and hospital/ laboratory were registered.

Antimicrobial susceptibility in the pre and post-PCV7 era is shown in figure 3. Fifty two pneumococcal strains were recovered in the pre-PCV7 period and 123 in the post-PCV7 era. An increase in penicillin and TMP/SMX resistance was observed in the post-PCV7 period mainly because of resistance of serotype 19A (data not shown). No significant differences were found in antimicrobial susceptibilities in both periods.

Thumbnail
Figure 3
Antimicrobial susceptibility of pneumococcal strains isolated from cancer patients before and after introduction of PCV7 in Mexico. N = 175

The serotype distribution reported in this study reflects better serotype coverage with PCV13 mainly derived by the elevated frequency of serotype 19A, in the post-PCV7 period, which is not present in PCV10 and it does not differ from pneumococcal serotypes causing infections in non-cancer patients reported previously.1111. Echániz-Avilés G, San Román-Álvarez L, Sánchez-Alemán M, Carnalla-Barajas MN, Soto-Noguerón A. Prevalence of Streptococcus pneumoniae serotype 19A before and after the introduction of the heptavalent conjugate vaccine in Mexico. Salud Publica Mex. 2014;56(3):266-71. https://doi.org/10.21149/spm.v56i3.7344
https://doi.org/10.21149/spm.v56i3.7344... In this study, serotypes 3, 19A and 35B were the most frequent pneumococcal serotypes in adult patients. The presence of serotypes 15B, 23A, 23B and 35B, not included in any PCV is important. This has to be considered when following vaccine guidelines and reinforce the use of PPV23 after the last dose of PCV13. The proportion of serotypes causing pneumococcal diseases covered with the PP23V was the same for adult patients in the pre and post-PCV7 period with almost 70% of serotype coverage. Thus, we do not observe a herd effect as a consequence of the introduction of PCV7 in children ≤2 years of age for this particular population making vaccination with PP23V very important for cancer patients. In Brazil, Cardoso NT and colleagues1212. Cardoso NT, Santos BA, Barbosa AV, Superti SV, Teixeira LM, Neves FP. Serotypes, antimicrobial resistance and genotypes of Streptococcus pneumoniae associated with infections in cancer patients in Brazil. Diagn Microbiol Infect Dis. 2017;87(3):281-5. https://doi.org/10.1016/j.diagmicrobio.2016.11.017
https://doi.org/10.1016/j.diagmicrobio.2... reported the prevalent pneumococcal serotypes in cancer patients for year 2013-2014 in 50 isolates as 23F (12%), 6A (8%), 3, 4, 20 and 23A (6% each) reflecting most non-vaccine serotypes as they use PCV10 with universal access for all children less than 2 years of age.

Similarly to studies conducted by Garcia-Vidal and colleagues66. García-Vidal C, Ardanuy C, Gudiol C, Cuervo G, Calatayud L, Bodro M, et al. Clinical and microbiological epidemiology of Streptococcus pneumoniae bacteremia in cancer patients. J Infect. 2012;65(6):521-7. https://doi.org/10.1016/j.jinf.2012.08.015
https://doi.org/10.1016/j.jinf.2012.08.0... a large diversity of capsular types was found to be associated with diseases among the population investigated, although types differed in prevalence. This fact may be related to the immunocompromising conditions of the disease itself or to therapies that such patients usually undergo that significantly decrease the immunological system functions and allowing less common capsular types to cause infections.

Limitations of the study include a small number of patients and lack of information on baseline characteristics like neutropenia, clinical features and case-fatality rate, particularly important is the lack of information regarding the vaccine status at the time of infection.

It has been found that the administration of inappropriate initial empirical antibiotic therapy is a risk factor associated with mortality in patients with solid tumors, suggesting a prompt identification and knowledge of antimicrobial susceptibility patterns can influence patient outcome. In this study, antimicrobial susceptibility to penicillin and cefotaxime decreased in the post-PCV7 period, erythromycin resistance was above 30% in both periods. Empirical treatment with third generation cephalosporin may decrease the risk of treatment failures due to beta-lactam resistance, but local susceptibility patterns must be available to improve empirical treatments. Efforts should be made to reinforce surveillance and increase vaccination coverage in adults, particularly in oncology patients. 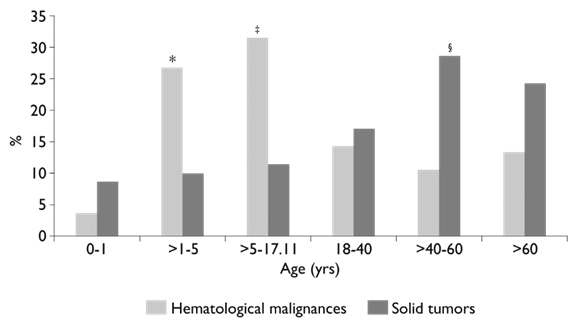 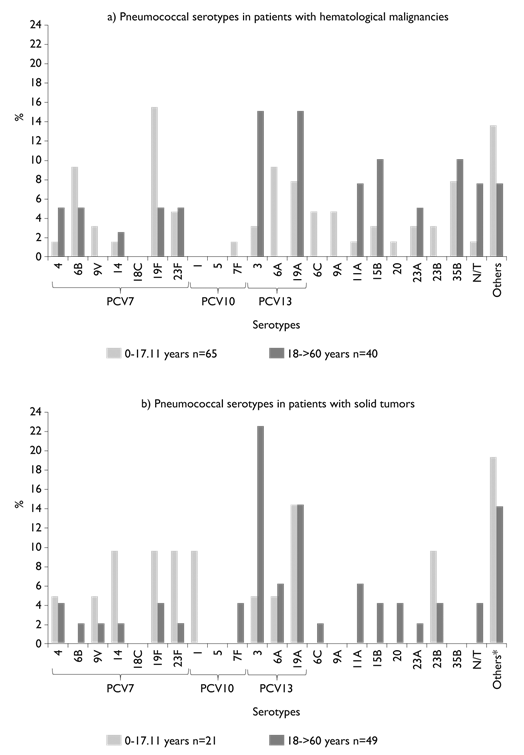 Figure 3   Antimicrobial susceptibility of pneumococcal strains isolated from cancer patients before and after introduction of PCV7 in Mexico. N = 175 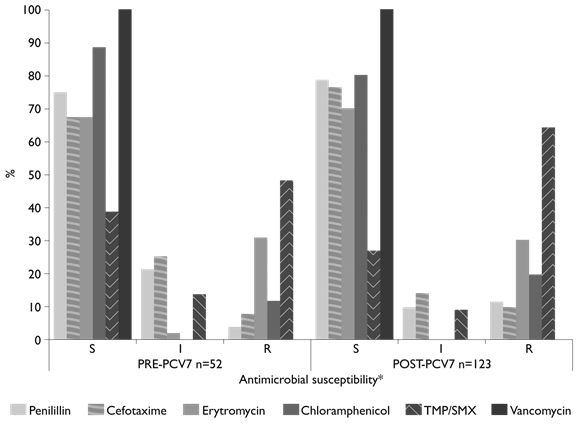 Table I   Distribution of S. pneumoniae serotypes causing invasive and non-invasive diseases in patients with cancer before and after introduction of PCV7 in Mexico, 1994-2016 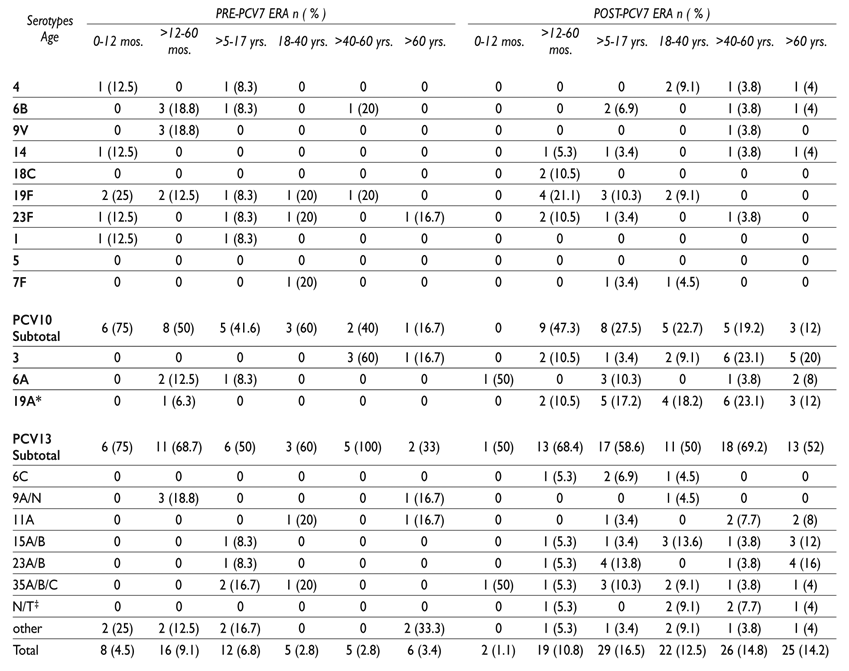