Dietary intake and adequacy of energy and nutrients in Mexican adolescents: Results from Ensanut 2012

To estimate energy and nutrient intakes and adequacies in Mexican adolescents.

Dietary intake was assessed in 1 961 adolescents who participated in the National Health and Nutrition Survey 2012 (Ensanut 2012), by a food frequency questionnaire. Medians of intakes and adequacies were estimated for energy, macro- and micronutrients and are presented by residence area, region and household wealth index (HWI). Consumption by food groups was estimated.

Median daily energy intake was 2 000 Kcal in males and 1 800 Kcal in females. High prevalences of inadequacy were observed for fiber, PUFAs, iron, zinc and calcium. These inadequacies were higher among individuals of low HWI. Moreover, excessive intakes of total and saturated fat were higher among adolescents of higher HWI.

The diet of Mexican adolescents is deficient in essential nutrients for good health and high in saturated fat. Actions are needed to promote a healthy diet.

In Mexico, according to the 2006 National Health and Nutrition Survey (Ensanut 2006), 30% of adolescents had deficient consumption of energy, zinc, vitamin A, folate and calcium. In addition, 35% had excess weight88. Rodríguez-Ramírez S, Mundo-Rosas V, Shamah-Levy T, Ponce-Martínez X, Jiménez-Aguilar A, González-de Cossío T. Energy and nutrient intake in Mexican adolescents: analysis of the Mexican National Health and Nutrition Survey 2006. Salud Publica Mex. 2009;51(Suppl 4):S551-61. https://doi.org/10.1590/S0036-36342009001000010
https://doi.org/10.1590/S0036-3634200900... and poorest families had high consumption of foods that are high in energy and low in micronutrients and fiber, as sugary drinks, alcohol and some industrialized foods. Given the relevance of micronutrient deficiencies during adolescence, due to the immense demand for nutrients,99. Adam G, Elhassan E, Ahmed A, Adam I. Maternal and perinatal outcome in teenage pregnancies in Sudan. Int J Gynaecol Obstet. 2009;105(2):170-1. https://doi.org/10.1016/j.ijgo.2008.11.028
https://doi.org/10.1016/j.ijgo.2008.11.0... it is fundamental that the consumption of the adolescent population is monitored nationwide. The objective of this study is to estimate the intake and percent adequacy of energy intake (macronutrients, minerals), as well as their prevalence of inadequacy, in Mexican adolescents from Ensanut 2012 using a FFQ.

Data collection and construction of variables

Diet. Dietary data were collected through a SFFQ that was based on the SFFQ used in Ensanut 20068with 39 additional foods. In total, information on 140 foods and drinks was obtained. The data collected included the number of days, times per day, portion size and number of portions consumed during the seven days prior to the interview. The SFFQ was applied by personnel who were trained and standardized on information collection and recording. SFFQ was validated against 24 hours recall in adolescents and it is a suitable tool to estimate energy and nutrient intakes and rank subjects according to their intakes.1111. Denova-Gutiérrez E, Ramírez-Silva I, Rodríguez-Ramírez S, Jiménez-Aguilar A, Shamah-Levy T, Rivera-Dommarco J. Validity of a food frequency questionnaire to assess food intake in Mexican adolescent and adult population. Salud Publica Mex . 2016;58(6):617-28. https://doi.org/10.21149/spm.v58i6.7862
https://doi.org/10.21149/spm.v58i6.7862...

The database was then cleaned excluding 176 adolescents with an average intake to estimated requirement ratio greater than 3 standard deviations of the mean,1212. Ramírez-Silva I, Jiménez-Aguilar A, Valenzuela-Bravo D, Martinez-Tapia B, Rodríguez-Ramírez S, Shamah-Levy T, et al. Methodology for estimating dietary data from the semi-quantitative food frequency questionnaire of the Mexican National Health and Nutrition Survey 2012. Salud Publica Mex . 2016;58(6):629-38. https://doi.org/10.21149/spm.v58i6.7974
https://doi.org/10.21149/spm.v58i6.7974... and 66 pregnant or breastfeeding female were also excluded.

Indigenous ethnicity. A household was considered indigenous when the household head stated that he/she spoke an indigenous language.

Assent was obtained from the adolescents, as was informed consent to participate in the study from their parents or guardians. Protocol received prior approval from the Institutional Review Board at the National Institute of Public Health (INSP, in Spanish).

Data from 1961 Mexican adolescents (12 to 19 years old) representative of around 20.68 million are presented. Two out of every three adolescents live in urban areas, close to 50% in the Central region of the country, 11% lived in indigenous households and 34% were overweight or obese (table I).

The energy intake for male subjects was around 2000 kcal/d. Males from rural areas consumed a greater amount of carbohydrates and fiber and a lesser amount of heme iron and vitamin A (table II) than those from urban areas. A high intake of total fat was observed in adolescents of both sexes in the North region (table III). High HWI males had greater daily intake of energy, proteins, total fat, monounsaturated fat, total iron, calcium, zinc but lower intake of fiber compared to males with a lower HWI (table IV).

Adequacy percentage and prevalence of inadequacy

In males, energy adequacy was around 80%. Nutrients they consumed far above the recommendation were protein and zinc. Males from urban areas had a lower AP for fiber than males in rural areas. Young urban males had greater PIs for fiber than their rural counterparts. In females, energy adequacies were between 7 and 9% above the recommendation. Nutrients that were far above the recommendation were: protein and zinc. Females from rural areas had lower APs for total fat but higher APs for carbohydrates when compared to urban females. Urban females had lower PIs for total fat and higher prevalences for monounsaturated fat and carbohydrates than rural ones (table II).

This analysis of the dietary intakes of Mexican adolescents showed high PIs of fiber, polyunsaturated fat, iron and calcium; as well as high prevalences for intakes above the recommendations for total fat, saturated fat and carbohydrates. Inadequacies were more often observed in adolescents with low HWI, in the rural areas, and in the Southern region.

According to Ensanut 2006,88. Rodríguez-Ramírez S, Mundo-Rosas V, Shamah-Levy T, Ponce-Martínez X, Jiménez-Aguilar A, González-de Cossío T. Energy and nutrient intake in Mexican adolescents: analysis of the Mexican National Health and Nutrition Survey 2006. Salud Publica Mex. 2009;51(Suppl 4):S551-61. https://doi.org/10.1590/S0036-36342009001000010
https://doi.org/10.1590/S0036-3634200900... the national prevalence of anemia in adolescents was 5.6% (95%CI 4.9-6.4), and it was greater in females (7.7%) than in males (3.6%). In our analysis, there were significant differences in PI for iron in the North and South regions in females, which may suggest low intake of sources of heme iron and the presence of non-heme iron absorption inhibitors. Previous publications indicate that the Mexican diet has a low bioavailability of iron (7.5%) with a high amount of iron absorption inhibitors such as phytates, which are found in significant amounts in maize, which is a basic staple food in the Mexican diet.2626. Rivera J, Hotz C, Rodríguez S, García A, Pérez AB, Martínez H, et al. Hierro. En: Bourges H, Casanueva E, Rosado J. Recomendaciones de ingestión de nutrimentos para la población mexicana. Mexico: Editorial Panamericana, 2005:247-62.

Consumption by food groups gives a possible explanation about the high consumption of saturated fats, which could be due to a higher consumption of whole dairy than low-fat dairy. The inadequacy in fiber intake could be related to a lower consumption of fruits and vegetables which were found below recommendations.2727. World Health Organization. Diet, nutrition and the prevention of chronic diseases. Report of a joint WHO/FAO Expert consultation. Switzerland: WHO, 2003 [cited 2017 April]. Available from:http://apps.who.int/iris/bitstream/10665/42665/1/WHO_TRS_916.pdf?ua=1
http://apps.who.int/iris/bitstream/10665... Also, we found a high energy contribution of sweetened or high fat content food groups, including sweetened beverages which were consumption above the recommendation.2828. Rivera JA, Muñoz-Hernández O, Rosas-Peralta M, Aguilar-Salinas CA, Popkin BM, Willett WC. Beverage consumption for a healthy life: recommendations for the Mexican population. Salud Publica Mex . 2008;50(2):173-95. https://doi.org/10.1590/S0036-36342008000200011
https://doi.org/10.1590/S0036-3634200800... On the other hand, the consumption of plain water and non-sweetened beverages was below the recommendation.

This analysis has some limitations, primarily those derived from the instrument used to measure dietary intake since it was a 7-day SFFQ. Because the period is so short, the season of the year may affect the results; however, the national survey was carried out over a 7-month period (October 2011 to April 2012), so the intake includes a large part of the year on a national level. Although the list of foods included in the questionnaire includes those that cover the diversity of the Mexican diet, it is possible that there is under-reporting of some foods that are highly consumed in some regions or states in the country. It is also possible that the reported intake is affected by factors such as memory, nutritional status and gender.2929. Mendez M, Wynter S, Wilks R, Forrester T. Under- and overreporting of energy is related to obesity, lifestyle factors and food group intakes in Jamaican adults. Public Health Nutr 2004;7:9-19.,3030. Miller T, Abdel-Maksoud M, Crane L, Marcus A, Byers T. Effects of social approval bias on self-reported fruit and vegetable consumption: a randomized controlled trial. Nutrition Journal; 718. https://doi.org/10.1186/1475-2891-7-18
https://doi.org/10.1186/1475-2891-7-18...

Underestimations of nutrient adequacies ranging from 1 to 12% were found between the entire sample and those that reported a plausible intake -considered as those within + 1 standard deviation from the mean energy adequacy (data not shown)-. The high prevalence of energy inadequacy (68% for males and 43% for females) should be taken with caution, since underestimation and underreporting of energy intake (up to 38%) is a known limitation of the SFFQ.3131. Subar AF, Kipnis V, Troiano RP, Midthune D, Schoeller DA, Bingham S, et al. Using intake biomarkers to evaluate the extent of dietary misreporting in a large sample of adults: The OPEN Study. Am J Epidemiol. 2003;158(1):1-13. https://doi.org/10.1093/aje/kwg092
https://doi.org/10.1093/aje/kwg092...

Conversely, some of the strengths of this study are derived from the design of the survey and its representativeness on different levels. Denova and colleagues1111. Denova-Gutiérrez E, Ramírez-Silva I, Rodríguez-Ramírez S, Jiménez-Aguilar A, Shamah-Levy T, Rivera-Dommarco J. Validity of a food frequency questionnaire to assess food intake in Mexican adolescent and adult population. Salud Publica Mex . 2016;58(6):617-28. https://doi.org/10.21149/spm.v58i6.7862
https://doi.org/10.21149/spm.v58i6.7862... reported an acceptable correlation between the FFQ and a 24-hour recall with a replicate questionnaire in a subsample of Ensanut 2012.

In conclusion, the diet of a representative sample of Mexican adolescents revealed insufficient intakes of some nutrients that are essential for optimal health and an excessive intake of saturated fat. Actions are needed to promote a healthy diet in this population. 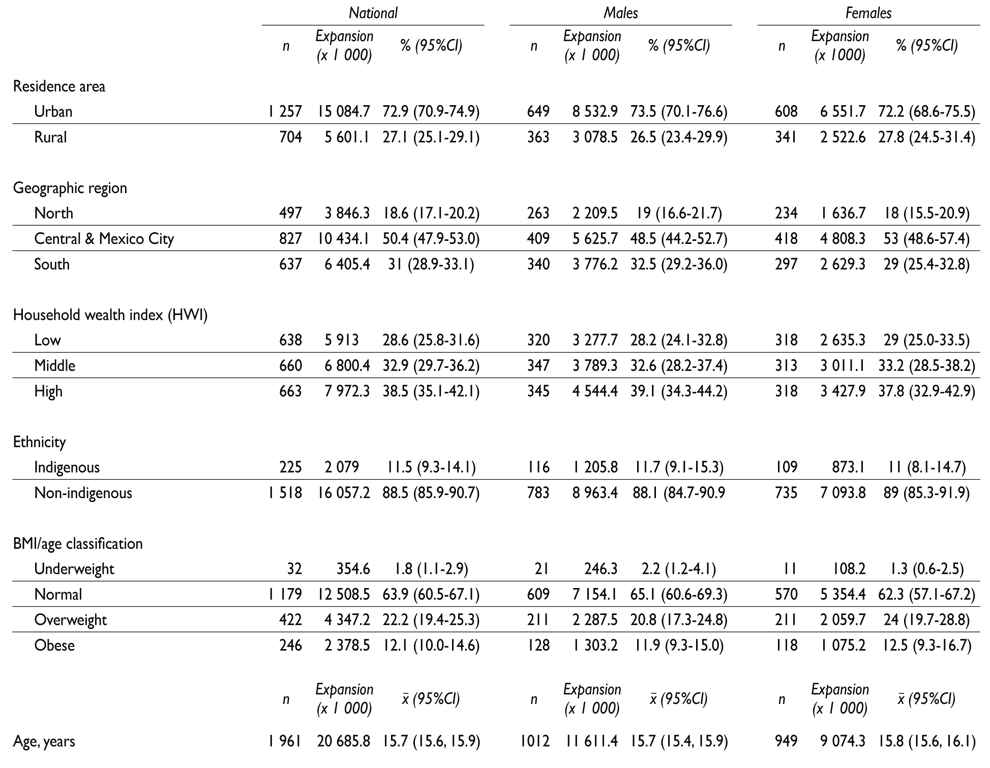 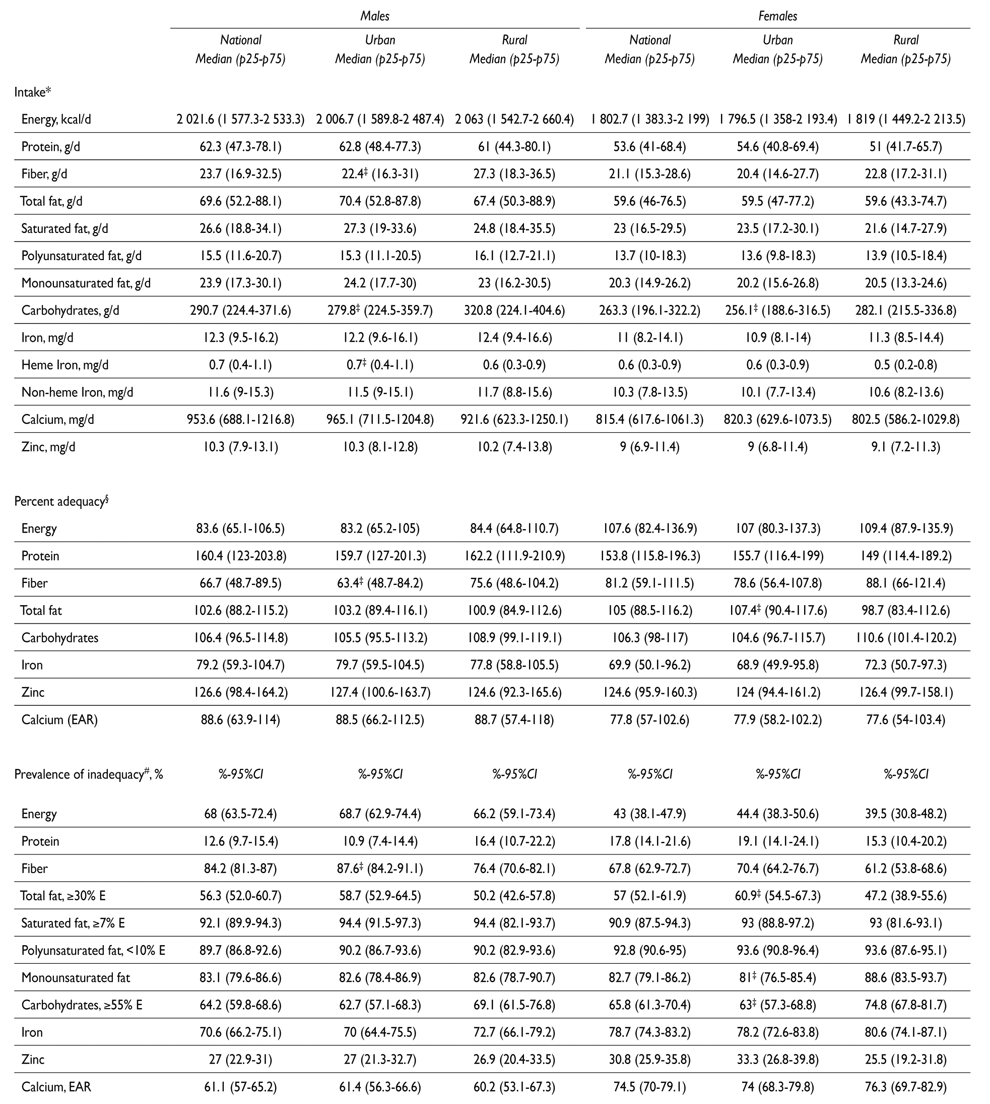 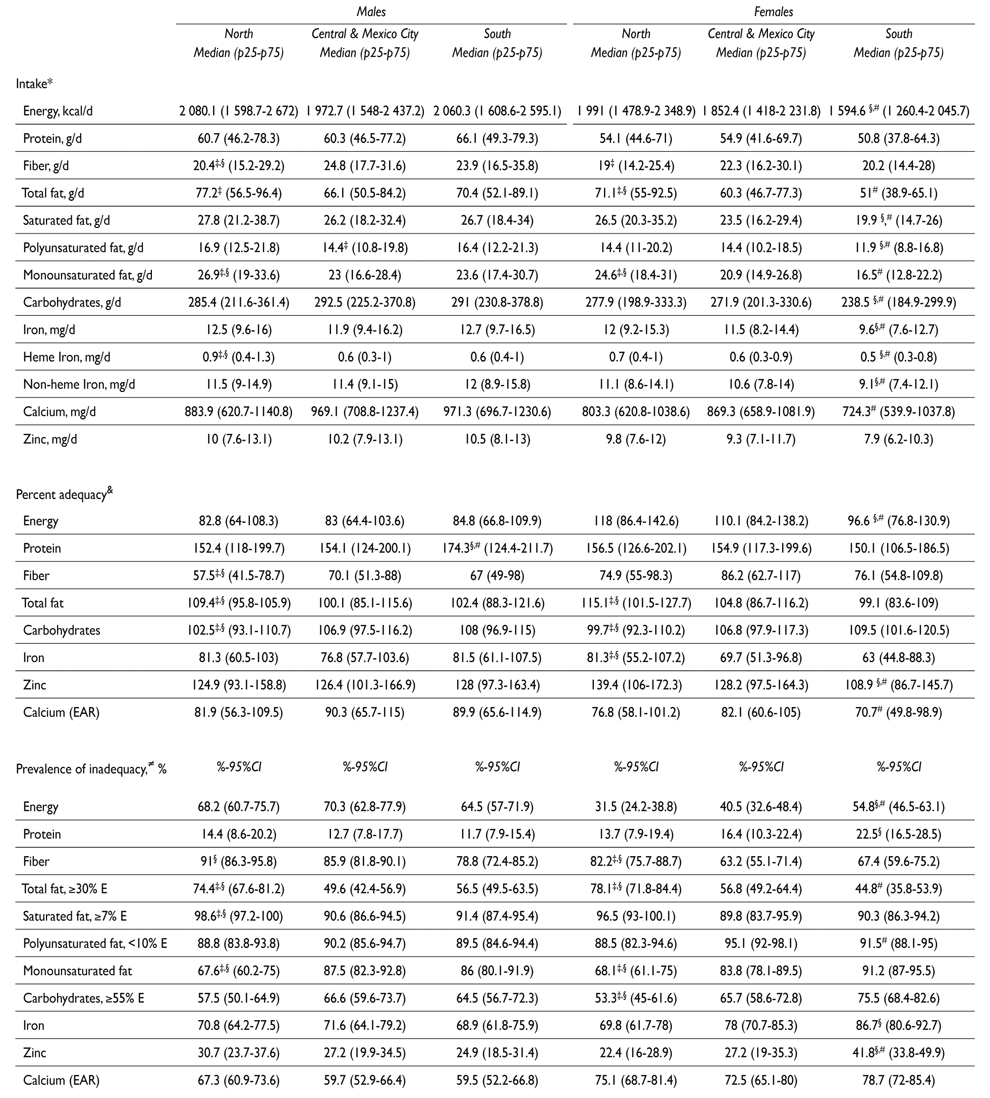 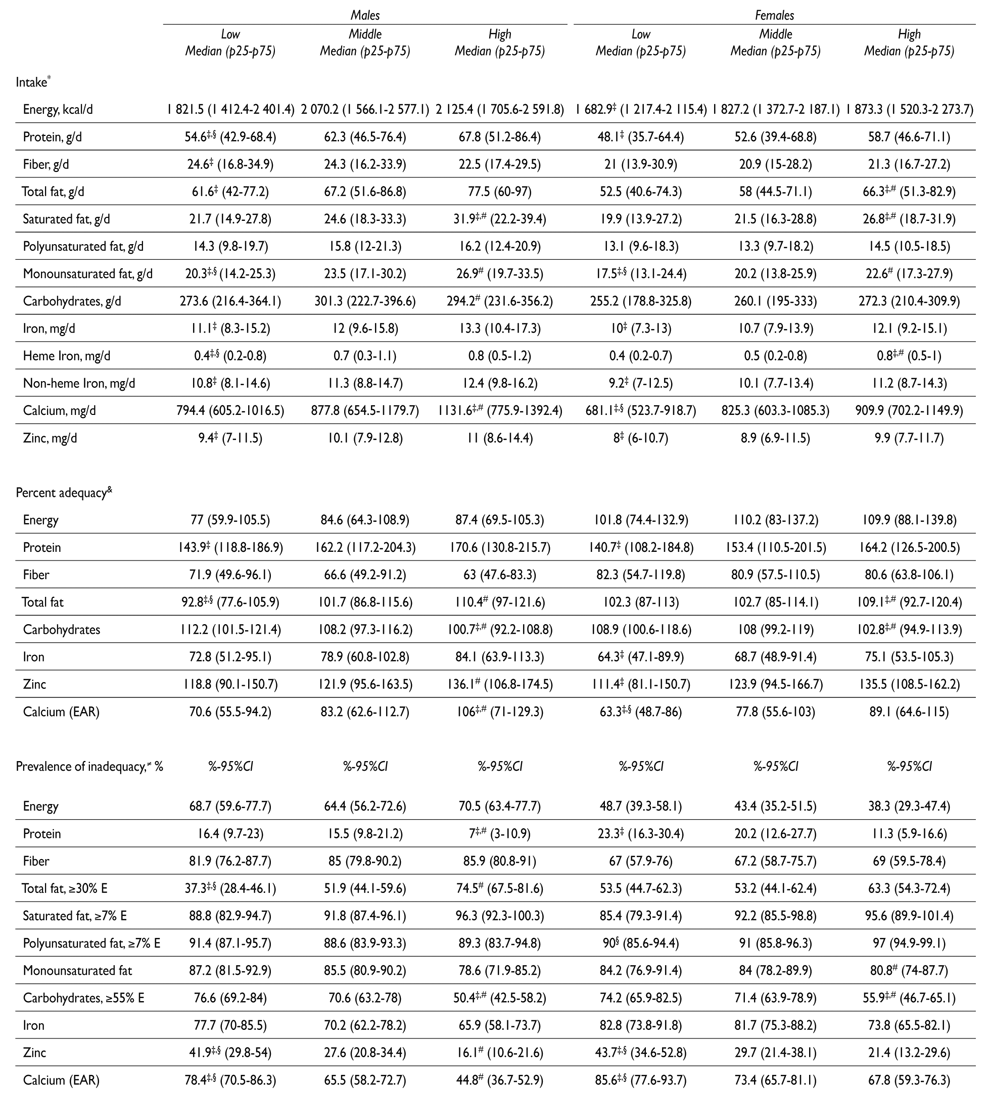 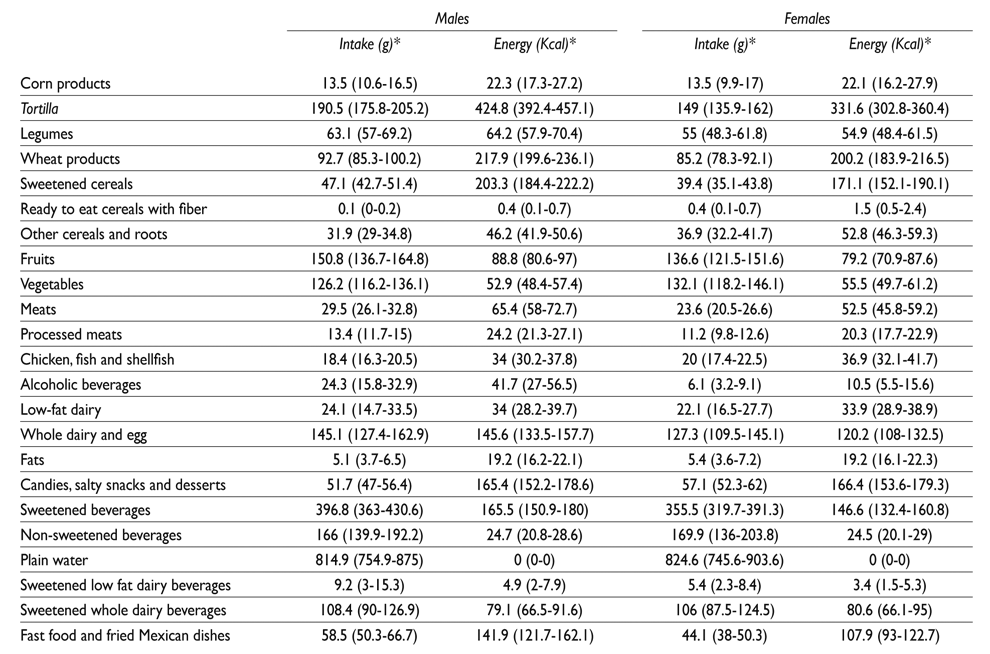