Malnutrition leading cause of death in post-war Angola

Malnutrition replaced violence as the main killer of displaced children and adults at the end of Angola's bloody civil war, says the medical relief organization, Médecins Sans Frontières (MSF). A survey (BMJ 2003;327:650-5) by the organization documents the disastrous health impact of armed conflict on an isolated population that has been largely ignored by the outside world.

The survey focused on the families of former members of the rebel movement UNITA (União Nacional para a Independência Total de Angola), which was defeated after a 27-year civil war. A ceasefire was signed in April 2002. In the last four years of the war, an international embargo prevented relief organizations from reaching UNITA-held areas so that by the time of the ceasefire, some three million people were judged to be in need of immediate help.

MSF says that death rates among the displaced UNITA families during the survey period, between mid-2001 and mid-2002, were about three times as high as expected for a population in a low-income country. Some of the deaths could have been avoided if humanitarian aid had been available, the report says. It calls for more effective humanitarian responses to the needs of people caught up in wars, whatever the political and military considerations. The report also criticizes the slowness of the aid response in the first four months after the ceasefire, blaming a "general unwillingness on the part of donor agencies" to commit money to the UN's appeals for Angola at the time.

"These findings show that once the conflict is over and the cameras are switched off, the suffering continues," said Francesco Checchi, an epidemiologist and co-author of the report. He added that Angola's situation is unlikely to be unique given the large number of other countries currently in the midst of armed conflicts or their aftermath.

During August 2002, MSF interviewed a representative sample of more than 6500 householders in 11 demobilization camps for former UNITA families in four provinces, which together accommodated more than 149 000 people. For each death reported, householders were asked to select the most likely cause from a list: fever or malaria, diarrhoea, cough, measles, malnutrition, violence or war, or other causes.

Up to December 2001, violence or war was the leading cause of death, accounting for 34% of the reported deaths in the sample. But in 2002 malnutrition took the place of war, accounting for 34% of the deaths reported during that year. The proportion of deaths attributable to malnutrition rose steadily from 15% in the summer of 2001 to 39% in the spring of 2002. In the sample population as a whole, there were 1.5 deaths per 10 000 people per day, three times as high as in neighbouring Zambia. In children under the age of 5, the death rate was four times higher than normal for the age group: 4.5 deaths per 10 000 each day. 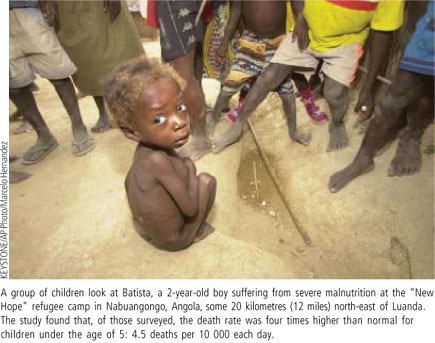 In young children especially, malnutrition often proves lethal when combined with a number of other diseases such as diarrhoea, malaria and measles, according to a WHO report by the Nutrition for Health and Development Department (Nutrition for Health and Development: A global agenda for combating malnutrition, 2000). It is relatively rare for people to die of simple hunger but in Angola Checchi said that, in addition to deaths from infectious diseases, householders consistently reported deaths from hunger in adults and children. "I have rarely seen people in such a state of destitution," he said.

However, recent data from the UN Standing Committee on Nutrition (Report on the Nutrition Situation of Refugees and Displaced Populations, 42, August 2003) suggest that since the end of the survey (August 2002) food security has been improving in Angola.

The MSF report concludes that, for this displaced population, "minimum standards in emergency response were not met … military and political considerations must not come in the way of effective and timely humanitarian access to populations endered isolated by such conflicts."

In response to the paper's authors' suggestion that there had been unacceptable delays in getting aid to the UNITA families, an official from the World Food Programme in Luanda said "we were aware of the need and we responded as quickly as possible. But getting access to some of these areas is a huge problem. In many cases there are no roads, no bridges, and the areas are heavily mined. We mobilized all our resources to respond."