International agencies are scrambling to raise funds to maintain three fledgling health-care projects in Myanmar, after the Global Fund to fight AIDS, Tuberculosis and Malaria withdrew grants to the country in August this year.

Discussions are underway with donors in Norway, Australia, the United Kingdom and Japan to try to secure the survival of a project which began in January to tackle tuberculosis and initiatives in HIV/AIDS and malaria which commenced in April. Collectively the projects were to have received US$ 98.4 million from the Global Fund over five years, US$ 11.8 million of which has already been disbursed. WHO is also looking at ways to redistribute existing funding to make money available for Myanmar and the Democratic People's Republic of Korea, (DPR Korea), which has faced similar funding withdrawals from the Global Fund.

"We are doing everything we can to get resources now for Myanmar and DPR Korea. We are promoting horizontal cooperation between WHO country offices, which means that countries like India and Indonesia which have extra funds transfer them to these countries," said Dr Samlee Plianbangchang, Regional Director of WHO's Regional Office for South East Asia.

In the meantime, the United Nations Development Programme (UNDP), the Global Fund's principal recipient in Myanmar, and other agencies are formulating a plan to salvage the remaining US$ 8.3 million of Global Fund financing already disbursed but not yet put to use and agreement was due to be reached by the end of September. "This is to make sure activities continue until other donors can take over," said Jon Liden, spokesman for the Global Fund. "We feel by leaving behind US$ 11.6 million, nearly a third of the whole grant, it will cushion the transition."

The plan would cover the costs of these health programmes in Myanmar during a six-month transition to alternative sources of funding for those programmes.

The Global Fund's decision to pull out of Myanmar was unprecedented. Previous withdrawal of funding from DPR Korea was for projects that were not yet underway.

These two plus Cuba, Iran, Sudan and Ukraine are the only countries that are currently subject to the Global Fund's Additional Safeguards Policy which aims to ensure that funding is used for its intended purpose and not to benefit the government.

In nearly half the countries that receive Global Fund grants, the government is not the principal recipient. Myanmar is one of those countries.

"How do you make sure the funds are spent in an accountable way in a country that is notorious for corruption? We spent a lot of time negotiating safeguards ... and set up a system and it worked for the first six to nine months. I was there in late February, it seemed to be going very well," Liden told the Bulletin. 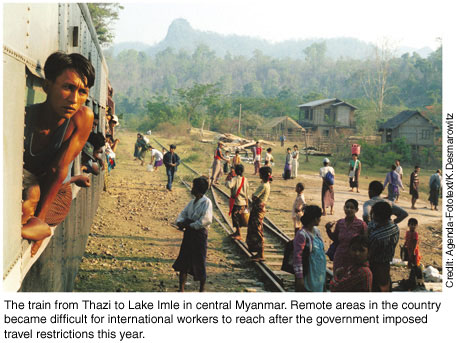 However, in July this year the Myanmar government introduced new travel clearance procedures which would effectively deny unrestricted access to areas where Global Fund projects were being implemented. Although the travel restrictions were temporary, they resulted in permanent withdrawal of funding.

"UNDP said they couldn't implement our grants within our safeguards and timescale and they advised us that they should cease to be the principal recipient," said Liden. He denied that the withdrawal was due to political pressure from the United States, the Global Fund's biggest donor. "We felt we had very clear guarantees that all organizations that had been critical of providing a grant to Myanmar could find acceptable. We'd done a lot of ground work with them," he said.

However, the move has raised questions about whether undue political influence has had an impact on the Global Fund's structure which in turn has made it impossible for projects to be implemented in Myanmar. "The real problem is that the fund, the mechanism, lacks the level of flexibility needed to give us time to renegotiate the points. It's more an issue of flexibility," said Charles Petrie, the UNDP's Resident Representative in Myanmar. "An environment like Myanmar is complicated, it takes time to get these things through. The time-bound nature is perfectly acceptable but means that the conditions in Myanmar left us in a difficult position to achieve performance target for that period."

"Ever more stringent conditions have been imposed by the Global Fund on the principal and sub-recipients during implementation of approved programmes. Partners have endured these conditions, often with a sense of humiliation, for the sake of people in need. They have persevered and demonstrated their flexibility in order to make the grant work," the CCM said in a written statement.

"The conditions imposed by the Global Fund obstructed and undermined our ability to meet performance-based and time-bound targets; while the CCM accepts a safeguard policy to ensure accountability, this policy must be accompanied by more flexible time lines," the CCM statement said.

Liden, however, denied that the Global Fund had placed any new safeguards or stricter interpretation of safeguards on Myanmar during the implementation period.

While the full impact of the funding withdrawal remains to be seen, there are also concerns that the Global Fund decision will colour international donors' view of Myanmar, to the detriment of future humanitarian work there.

"The UN Country Team is unanimous in its view that the termination of the Global Fund grant must not feed impressions that it is impossible to deliver humanitarian assistance in Myanmar," said Brian Williams UNAIDS country coordinator for Myanmar. "The efforts of the UN Joint Programme on HIV/AIDS since 2003 indeed demonstrate that the delivery of such assistance is possible, with accountability and transparency. Current assistance being provided by the UN in a variety of thematic areas exceeds US$ 45 million per year. The UN Country Team believes that it can 'make the money work' in Myanmar."