In the Middle Ages seaports put travellers in quarantine for leprosy and plague. Today's demand for health screening is fuelled by the same fear of infectious disease plus some new factors.

In an age of jet travel and porous borders, a large portion of the world's population is on the move. But while international law recognizes a person's right to leave their country, no country is obliged to allow anyone in, and health can be one of the reasons.

From 1960 to 1990, immigration medical screening for public health reasons became less a government priority with advances in the treatment of infectious disease, according to the International Organization for Migration (IOM). But since 1990, there has been a renewed interest in such screening because of the re-emergence of diseases, such as tuberculosis, combined with unprecedented population movement and a widening gap in countries' health standards. But while some screening has proved effective, other forms raise questions as to the ethical and practical limits of such measures.

Countries use several kinds of health screening to detect conditions such as tuberculosis and sexually transmitted diseases that may pose a public health risk and conditions, such as heart disease, to avoid a burden on the host country's health services.

The 1969 International Health Regulations (IHR), which were revised this year, limit the health screening measures, which countries can apply, to short-term visitors who pose an immediate risk of spreading a disease.

The IHR, however, allow countries to apply additional health screening measures to people seeking long-term residence, recognizing the potential burden a sick person could have on the new country's health services.

For this reason, there are no limitations on a country's right to demand health information of those seeking residence, while they are limited in what they can ask of short-term visitors.

Health screening of tourists and other short-term visitors is therefore rare and came to the fore during the Severe Acute Respiratory Syndrome (SARS) crisis in 2003, when thermal scanners  in addition to pre-arrival health questionnaires  were used to detect passengers with a fever at airports across South-East Asia.

Countries such as Argentina and Brazil, far from the epicentre of the outbreak in Asia, also adopted temporary measures by screening passengers arriving from Canada with a written questionnaire and a short interview. "The booths for screening are still in place but no screening is currently being carried out," said Colin Isaacs of the Canadian Institute for Business and the Environment, who frequently travels to the two countries.

Similar health screening measures have been considered in the event of an avian influenza outbreak among humans, but according to WHO are unlikely to be effective because pandemic influenza is considered more difficult than SARS to control.

"If only a few countries are affected, travel-related measures, such as exit screening for persons departing from affected areas, might delay international spread somewhat but cannot stop it," states a 2005 WHO report entitled: Avian influenza: assessing the pandemic. The report adds: "When large numbers of cases occur ... entry screening at airports and borders will have no impact".

Tough anti-SARS measures raised questions about civil rights but were welcomed in the face of a frightening new disease. Some people even volunteered to go into quarantine.

In contrast, many international public health experts agree that barring people with HIV from entering a country is ineffective in preventing spread of the virus and discriminatory. This dual argument was summed up in a joint 2004 UNAIDS and IOM statement concluding: "HIV/AIDS-related travel restrictions have no public health justification".

There are three main reasons for this: HIV is present in every country; it is impossible to close borders effectively and permanently; and travel restrictions may encourage visitors to enter or remain illegally, making HIV prevention even more difficult.

Yet the last two decades have seen a rise in the number of countries that impose travel restrictions on people with HIV. A 1999 study by the German nongovernmental organization Deutsche AIDS Hilfe found that 101 of 164 countries surveyed imposed some form of HIV-related travel restrictions. These come in a number of forms, such as mandatory HIV testing for people seeking entry to the country and these invariably apply to short- and long-term visitors, including students, workers, refugees and immigrants. 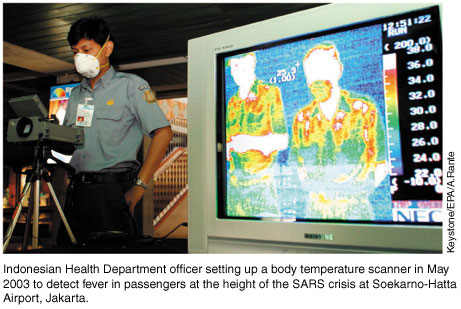 Jacqueline Weekers, Senior Migration Health Advisor at the IOM, said that positive screening results do not necessarily bar entry. For example, some countries, such as the United States, accept certain categories of applicants who test HIV positive through pre-departure screening. These applicants may be accepted on humanitarian grounds or allowed to apply for a waiver, which can permit them to travel after they receive health education and counselling.

A small but unknown proportion of some 17.2 million refugees and 80.9 million economic migrants undergo some form of health screening, according to the IOM.

The United Kingdom announced a new immigration pre-entry health screening programme for tuberculosis initially to be implemented this month in four countries: Bangladesh, Sudan, Thailand and the United Republic of Tanzania.

"TB is a growing problem in the UK and the new scheme is aimed at tackling this problem. This is not a new concept and other countries such as the USA, Australia, Canada and New Zealand already insist on long-term migrants undergoing a health check," said a government statement.

The UK pilot programme is significant, signalling a shift away from health screening for tuberculosis (TB) on arrival which came to be regarded as ineffective and expensive. The new approach also avoids language problems and long waiting times for tests.

The IOM assists 10 countries with pre-departure health assessments to detect diseases that could pose a public health risk or an excessive burden on the receiving country. "Pre-departure health assessments ... help receiving countries prepare their health services for the new arrivals, as they may not be used to recognizing or treating certain ... diseases," Weekers told the Bulletin.

But some experts question whether such pre-departure checks are effective in preventing the spread of disease or can be ethical in practice.

Paul Sommerfeld, Chair of TB Alert, the UK's national TB charity, said: "It remains to be proven that pre-departure screening really works without infringement of human rights or encouragement of behaviour that would tend to hide the presence of disease; especially in the case of illnesses such as TB where diagnosis of active disease is often far from straightforward".