Smoke alarm from Afghanistan to Morocco

Fatwas against cigarettes and a smoke-free Mecca are two milestones in the new effort the countries of WHOs Eastern Mediterranean Region are making towards lowering the burden of disease caused by smoking.

There are few things that Jordanian television cameraman Emad Odaileh finds more relaxing than a long smoke at his favourite coffee house in downtown Amman. Bathed in the fragrance of fruit-scented tobacco and the gurgle of Oriental water pipes or narghile as they are known here, Odaileh and his friends chat about the days events while inhaling the smoke.

Its hard to get away from tobacco smoke in Jordan, or anywhere in the Middle East. Nearly everybody seems to be lighting up.

According to the World Health Organization (WHO), tobacco use is the worlds leading cause of preventable death. Smoking is responsible for 5.4 million deaths yearly, with 4 million of those deaths occurring in developing countries  countries that can least afford the health-care burden.

Under WHOs Tobacco Free Initiative (TFI), the 21 Member States of WHOs Eastern Mediterranean Region, are stepping up tobacco-control efforts. The Initiative was launched in 1998 and WHOs Framework Convention on Tobacco Control (WHO FCTC), which is now one of the most widely supported treaties in the history of the United Nations, entered into force in 2005.

The moves cant come soon enough, according to Dr Fatimah El-Awa, the regional adviser for the Tobacco Free Initiative at WHOs Office for the Eastern Mediterranean Region, which is based in Cairo.

"When we talk about tobacco, some people still look at us and laugh, saying, Well, people are starving and dying from poverty and youre talking about tobacco. But they dont understand that tobacco contributes to poverty."

With stronger tobacco control policies, including smoking bans expanding in public areas like restaurants in more parts of the United States of America (USA) and Europe, cigarette manufacturers are dumping their toxic merchandise in other parts of the world such as the Eastern Mediterranean Region, making tobacco control measures even more imperative, says El-Awa. The region comprises 21 Member States, from Egypt, Morocco and Tunisia in north Africa, through the Gulf countries, the Islamic Republic of Iran and the rest of the Middle East to Afghanistan and Pakistan in south Asia. It also includes Djibouti, Somalia and Sudan in sub-Saharan Africa.

"European countries and the USA wouldnt have moved forward with the policy of tobacco-free public places, restaurants and bars without a comprehensive approach that involves all sectors of government," El-Awa says, pointing to the public-area smoking bans in Belgium, France, Germany, Ireland, Italy, Spain and the United Kingdom.

El-Awa argues that until the countries of WHOs Eastern Mediterranean Region (EMR) adopt a comprehensive approach and government ministries work together, the region wont make similar progress to that in European countries. "It is beyond the authority or the capabilities of the ministries of health to work on tobacco control by themselves. They need partners such as the ministries of trade, finance and all other ministries that can help in strengthening tobacco control." 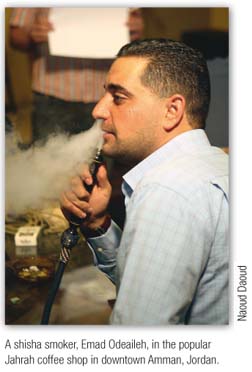 "Once this is reached in our Member States, tobacco control will jump to a different level. Unfortunately, this is not the case at this time  at least not in all EMR Member States."

Indeed, in the Eastern Mediterranean Region each country displays varying strengths and weaknesses in tobacco control.

For instance, two of the most populous countries  Egypt and Pakistan  are making greater strides in their tobacco control campaigns with the aid of a US$ 125 million fund set up by New York City Mayor Michael Bloomberg in 2006.

The Bloomberg Initiative to Reduce Tobacco Use targets 15 developing countries where the health burden from tobacco use is the highest.

Egypt and Pakistan were awarded US$ 3 million in grants under the initiative, according to El-Awa. Egypt is using the funds to strengthen tobacco health warnings and to set up a special implementation unit at its health ministry. It has also proposed turning the historic port city of Alexandria into a smoke-free zone.

Just over 25% of Egypts population of 80 million smokes. Egypt is also the largest cigarette manufacturer in the Middle East, producing 0.7% of the worlds total output, while its cigarette consumption is the highest in the Middle East and north Africa. Waterpipe consumption has also become a worry in the country. Legislation in Egypt restricts smoking in some public places, such as work and other enclosed areas, but taxes on cigarettes are low.

Some 25 to 30 million Pakistanis smoke and 1200 young people start smoking each day, according to Bloomberg Initiative figures. An estimated 100 000 Pakistanis die each year from tobacco-related illness. Given these numbers, the programme is expected to focus on reducing smoking demand. Model centres that encourage people to stop smoking are expected to be established in Islamabad, Karachi and Lahore, while support will be given to launch smoke-free cities and shopping areas.

Tobacco consumption in Pakistan is not limited to cigarettes, but also includes beedis (hand-rolled cigarettes), water pipes and chewing tobacco.According to Pakistans National Health Survey, 36% of men and 9% of women smoke.

But how are the other countries in the region faring? Jordan has prohibited tobacco sales to minors and became the first country in the region to plaster prominent health warnings on cigarette packets.

Dr Hiba Ayub, head of the Tobacco Control Department at Jordans Ministry of Health, says that a public clinic set up three years ago to help smokers overcome their addiction expects to provide free nicotine replacement therapy, from January 2008.

"Some 330350 smokers have participated in the programme yearly and 22% have succeeded in quitting," she says.

"You may think that isnt a high number, but globally the best rate so far for quitting is 2830%. Our rate is good given the short amount of time this public clinic has been in operation."

Jordan is educating young people about the dangers of smoking. "Whats important to stop smoking is to discourage people from starting to smoke when theyre young," Ayub says. Jordans Ministry of Health in conjunction with the Education Ministry and a local anti-smoking nongovernmental organization participate in school programmes.

"Most of our lectures are aimed at those aged 10 years and above, although we should start earlier," she admits.

Ayub says that while smoking hazards are discussed, they arent the focus of the talks. Instead, the message emphasizes positive reinforcement, encouraging young people to play sports and spend their money on things other than cigarettes.

But her department runs on a shoestring budget with much of its funding coming from WHO and the United Nations Childrens Fund (UNICEF). Only recently has the government begun to contribute funding, and the amount has not been disclosed.

In this region, religion plays an important role in daily life and it, too, is being used to advocate an end to tobacco use.

Islams holy cities of Mecca and Medina were pronounced tobacco free by Saudia Arabia in 2002, not just during the annual hajj pilgrimage, but all year long. The selling of tobacco products there is also prohibited. El-Awa says these restrictions are strictly enforced, although violations are unavoidable among some 4 million visitors every year.

Islamic religious leaders have also issued edicts or fatwa declaring smoking to be haram or prohibited.

El-Awa says that Muslim preachers take the opportunity during the fasting month of Ramadan to urge their congregations to give up smoking as do Christian priests at other times of the year, particularly those serving in the Coptic Orthodox Church in Egypt, the largest Christian community in the region. 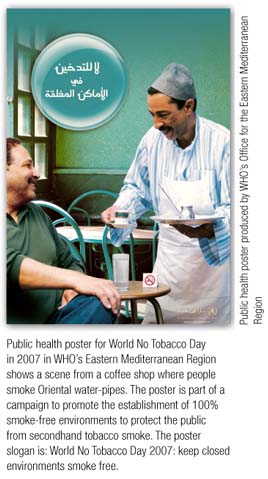 But in war-ravaged countries, like Afghanistan and Somalia, little has been done to stem tobacco use, while Tunisia and Morocco seem to present the biggest challenges to WHOs Eastern Mediterranean Regions campaign for countries to become Parties to the WHO FCTC. "They have very strong administrative departments which require many formalities for the ratification of the WHO FCTC to be completed," El-Awa says. "Still, we are hopeful that ratification will take place by May," she added.

Despite the conflict in Iraq, the government there has completed the process of ratifying the Framework Convention on Tobacco Control and is awaiting official deposit at the United Nations headquarters in New York.

Its neighbour the Islamic Republic of Iran took the novel step of prohibiting water pipe smoking in its cafes last year; something unheard of throughout most of the region.

But Ayub and other experts warn that the dangers posed by the narghile are even greater than those of cigarette smoking. "A mound of water pipe tobacco has the equivalent effect of smoking two to three packs of cigarettes."