There is no miracle solution to the addictive grip of opioid drugs such as heroin, writes Patralekha Chatterjee. New WHO guidelines confirm that, even after 40 years, substitution therapies such as methadone are still the most promising method of reducing drug dependence, but getting access to treatment is a global problem.

In the global battle against illicit drugs, stemming the crisis of opioid dependence poses a grave challenge.

The World Health Organization (WHO) is issuing guidelines to help countries treat dependence on opioids and prevent the transmission of HIV and other blood-borne infections.

The United Nations Economic and Social Council (ECOSOC) and the Commission on Narcotic Drugs invited WHO in collaboration with the United Nations Office of Drugs and Crime (UNODC) to develop the guidelines  to be published in the coming months.

"These constitute the first attempt to compare different approaches to the management of opioid dependence in a systematic way," says Dr Nicolas Clark, Medical Officer in WHO's Mental Health and Substance Abuse Department.

Globally, there are around 16 million illicit opioid users; 0.4% of the total population in the 15 to 64 age group. Of those, 11 million people abuse heroin, according to the 2007 World drug report. Opioids are naturally occurring opiates and synthetic and semi-synthetic drugs that act on opioid receptors in the brain and can cause dependance due to their euphoric effects. Heroin is an opioid. Other examples are morphine, methadone and buprenorphine, widely used as pain-killers.

The battle against opioid dependence is at its grimmest in the countries in and around Afghanistan, which accounted for nearly 93% of the global opium production in 2007. "Opiate addiction is increasing in the countries neighbouring Afghanistan, including India, the Islamic Republic of Iran and countries in central Asia, and along the east coast of Africa. In contrast, the situation is largely stable or even declining in most of Europe, North America, and several parts of east and south-east Asia," says Dr Thomas Pietschmann, of UNODC's Policy Analysis and Research Branch.

Perhaps one of the most surprising findings of the new WHO guidelines is that methadone maintenance treatment  a treatment that has been around for over 40 years  is still regarded as the most effective.

But one of the key global issues is access to treatment. Less than 650 000 people are thought to be receiving substitution treatment globally for opioid dependence, less than 10% of those in need of treatment. Opioid substitution therapy is the medically supervised administration of a psychoactive substance that is similar to the one producing dependence.

In countries where opioid substitution is widely available, 4050% of drug users receive treatment. Most of the unmet need for treatment is in Asia and eastern Europe, particularly in China, India and the Russian Federation.

The two most common agents used for substitution therapy are methadone and buprenorphine. Used in this way, these substances have a stable non-intoxicating effect, while diminishing the effects of any additional opioid use.

This long-standing treatment was endorsed in 2004 by WHO, UNODC and UNAIDS (Joint United Nations Programme on HIV/AIDS) in a joint position paper. The three agencies argued that there was consistent evidence to link substitution therapy for opioid dependence with substantial reductions in illicit use, criminal activity, deaths due to overdose, and behaviour that leads to a high risk of HIV transmission.

But various political, social and cultural factors impede the expansion of methadone (or buprenorphine) treatment for opioid addicts.

In many countries, methadone and/or buprenorphine maintenance treatment is unavailable or illegal. For example, though the Russian Federation has one of the highest rates of opiate use in the world, "substitution therapy by methadone and buprenorphine is forbidden by law. All treatment for drug abuse in the Russian Federation is abstinence oriented," says Dr Evgeny Krupitsky, Psychiatrist, Leningrad Regional Dispensary of Narcology.

Access to methadone depends on how strictly governments apply control measures to this narcotic. "In countries, where governments allow the use of methadone for medical and/or scientific purposes, the problems in accessing supplies of methadone (e.g. importing methadone) may be connected to problems their national competent authorities have with the application of control measures for narcotic drugs," explains Pavel Pachta, Chief, Narcotics Control and Estimates Section, International Narcotics Control Board (INCB).

But despite these daunting challenges on the ground, there are promising signs. China, for example, is ramping up its methadone maintenance programme for heroin users.

"The first methadone maintenance treatment clinic was piloted in 2004 in China," says Dr Li Jianhua, Deputy Director, Yunnan Institute for Drug Abuse. "By the end of 2007, there were 503 such clinics in 23 provinces. About 60 000 heroin-dependent patients were treated in these clinics till the end of 2007. It has already become an important treatment approach for heroin-dependent patients and a means of preventing the spread of HIV/AIDS. We plan to start using buprenorphine to treat heroin dependence this year. However, we wish we could have more methods for treating drug-dependent patients."

Abuse and diversion of opioids prescribed for substitution treatment are also of concern. India, for example, has a particular problem with abuse of pharmaceutical products such as buprenorphine.

A national survey, which the Ministry of Social Justice and Empowerment and UNODC conducted in 14 sites across India in 2004, found that the majority (35%) of drug users reported heroin as their primary drug of abuse. Other opioids (buprenorphine, propoxyphene and opium) accounted for 29% of drug use. The pattern of drug use varied in different parts of the country.

"The addiction to pharmaceuticals is a decade-old problem," says Dr Rajat Ray, Professor and Head of the Department of Psychiatry and Chief of India's National Drug Dependence Treatment Centre.

"India's enforcement agencies were under pressure from international bodies. As a result of crackdowns, opiates became scarce. So, drug users switched to alternative compounds. These were pharmaceutical products which gave them a similar experience: buprenorphine, propoxphene, diazepam, tranquilizers, or anti-histamines. The choice of compound varied from region to region," says Ray. But "dealing with drug abuse has been a low priority in the country. If it is getting more prominence today, it is because of the links with HIV. Opioid substitution therapy is available across the nation in only 35 centres. That is nothing for a country of India's size," he says.

But scaling up substitution is likely to be a daunting task. The first challenge is cost. "Many states do not have money so there are no state-sponsored programmes. And much more needs to be done to create greater public awareness about the efficacy of this approach," says Ray. 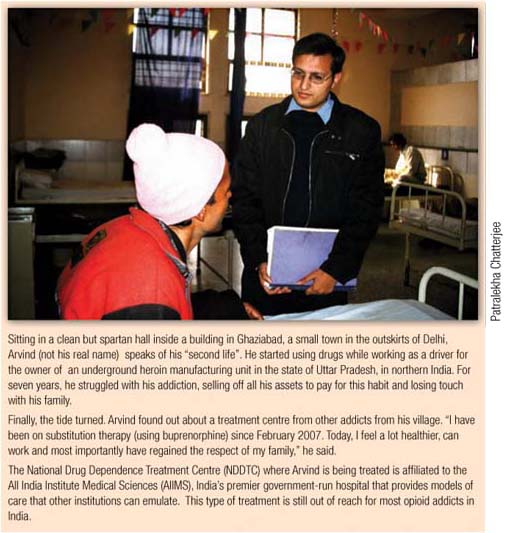 "In many countries in southern Asia, in particular Bangladesh, India and Nepal, there continue to be long-standing problems with pharmaceutical preparations containing controlled substances. In general, pharmaceutical preparations are diverted from domestic distribution routes and are sold without prescription in pharmacies and various other retail outlets in the region," observed the INCB in its 2006 annual report.

Senior officials of India's Narcotics Control Bureau say that the leakage of pharmaceutical preparations onto the black market is partly due to the lack of an effective mechanism to control the 600 000 chemists in the country.

These preparations are also sold on the black market by patients. "Without adequate supervision of administration, both methadone and buprenorphine will make their way to the black market to people who inject them and may contract disease or suffer overdose as a result," says WHO's Clark.

The sharing of contaminated injecting equipment among drug users is now the primary mode of HIV transmission in many countries in eastern Europe, the Commonwealth of Independent States and Asia, and therefore treating drug dependence has become vital to reducing transmission of the disease.

"India does not have a methadone maintenance clinic as yet but methadone will be piloted during the scale-up phase. NACO is considering the option of both methadone and buprenorphine for use as opioid substitution therapy for IDUs," says Dr Ravindra Rao, Programme Officer, NACO.