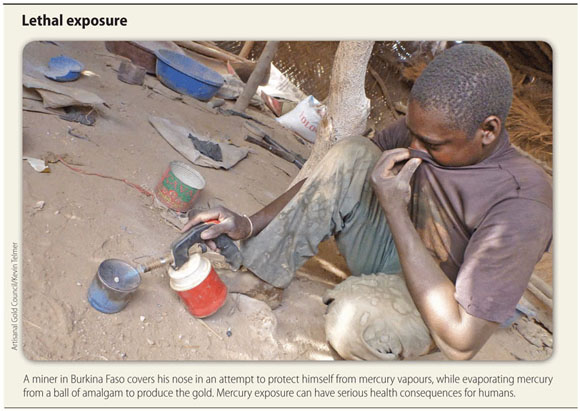 A new treaty to reduce the harmful effects of mercury for human health and the environment was approved by more than 140 countries in January.

The Minamata Convention on Mercury  named after the Japanese city that suffered a human health and environmental disaster as a result of mercury pollution half a century ago  provides controls across a range of products, processes and industries where mercury is used, released or emitted.

Mercury, a heavy metal, is of particular concern because it travels long distances in the atmosphere and persists in the environment. It also accumulates in ecosystems, including in fish.

In humans, mercury exposure can have serious health consequences, including permanent damage to the developing nervous system in children. It can also pass from mothers to their unborn children.

The treaty will be open for signature at a ceremony in Japan in October and will come into force once it has been ratified by 50 countries.

Governments agreed to set thresholds for the size of plants and level of mercury emissions to be controlled at the first meeting of the parties to the treaty, after it comes into force.

An important exception was the use of thiomersal (ethyl-mercury) as a preservative in human and animal vaccines, given the conclusion of WHO's Global Advisory Committee on Vaccine Safety that there is no evidence that the amount of thiomersal used in vaccines poses a health risk.

The treaty calls for a reduction in the use of dental amalgam (a compound of mercury and silver-based alloys) and sets a 2020 deadline for phasing out the manufacture of thermometers and blood pressure measuring devices with mercury. "This adds support to WHO's programmme assisting countries to replace these mercury devices with non-mercury alternatives," said Maria Neira, Director of the Department of Public Health and Environment at WHO.

What happens after the MDGs?

Recommendations on the future direction of global health after the Millennium Development Goals (MDGs) expire in 2015 are due to be finalized at a meeting in Botswana this month.

About 50 senior officials and experts are due to attend the meeting in Gaborone on 56 March, hosted by the Government of Botswana, including WHO Director-General Margaret Chan and Executive Director of the United Nations Children's Fund Tony Lake, ministers of health from several countries, and representatives from global health partnerships, the private sector, civil society organizations and academia.

The meeting aims to come up with clear recommendations on the future direction of health in the post-2015 development agenda to be included in a report for the United Nations Secretary-General's High-Level Panel of Eminent Persons, which includes senior officials, development experts and civil society activists from more than 20 countries.

These health recommendations will be discussed at the UN General Assembly during the week of 23 September. www.worldwewant2015.org/health 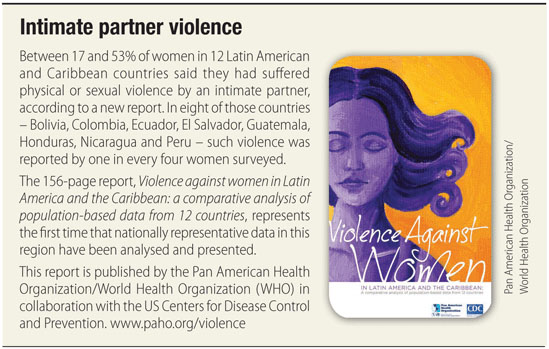 Global development assistance for health has remained roughly steady over the last three years despite the global financial crisis, according to a report by the Institute for Health Metrics and Evaluation (IHME).

The report entitled Financing global health 2012: the end of the golden age? found that the level of health aid disbursed by donor governments and the entities they fund had declined slightly from an historic high of US$ 28.2 billion in 2010 to US$ 27.4 billion in 2011. In 2012, this spending edged up again to US$ 28.1 billion, just below the 2010 level.

The report noted that most Organisation for Economic Co-operation and Development (OECD) countries had made cuts to aid budgets since 2011 and that OECD members, Canada, Japan, Italy, the Netherlands and Spain, were projected to cut development aid during the 20112013 period.

Given these circumstances, "very few countries will be able to meet the 0.7% gross domestic product aid spending target, although a few remain committed to that goal," the report noted.

The World Health Organization has developed a global monitoring framework to enable global tracking of progress in the prevention and control of major noncommunicable diseases  cardiovascular disease, cancer, chronic lung diseases and diabetes  and their key risk factors.

The framework comprises nine global targets and 25 indicators and will be submitted to the World Health Assembly in May for approval. Once adopted, Member States will be encouraged to develop national noncommunicable disease targets and indicators drawing on the global framework.

Many governments are struggling to make effective treatments more widely available while, at the same, containing costs. A new book, produced jointly by WHO, the World Intellectual Property Organization and the World Trade Organization, released last month may provide some solutions.

Promoting access to medical technologies and innovation is a study of policies and approaches that governments and others  particularly in developing countries  can adopt to make medical and health technologies more accessible.

This report "demystifies an intricate and extremely complex landscape of laws and policies and makes them accessible to the non-specialist," said WHO Director-General Margaret Chan. "In so doing, it sets out a comprehensive and coherent inventory of legal instruments and policy options that can be drawn on to craft measures that meet national public health objectives." http://www.who.int/phi