The incidence of cancer has increased worldwide1. In São Paulo city, the cancer disease were the sixth cause of hospitalization in 2011 (6.22% of all hospital admissions)2 and the second major cause of death in 2009 (14.9% of all death were caused by cancer)3. Considering this scenario the prevention and control of the oncological diseases is indispensable and requires a multidisciplinary approach, including the cancer screening exams4, which are recommended according to the gender and age. In Brazil, the women should perform the Pap smear exam older than 24 years old or with the beginning of the sexual life, according to the WHO suggestion5; mammography for those over 39 years6; the perform and age that the men should made a prostate screening exam (rectal touch, PSA dosage, biopsy, ultrasound) is not clear but this procedure is used is many countries7; and rectal screening cancer exam (fecal occult blood testing and colonoscopy) is suggested to all persons over 49 years old8.

The objective of this research was to describe the frequency with which cancer screening is performed among a group of persons with disabilities and to what extent these data are related to selected social variables.

The AceSS Study (Accessibility of Health Services to Persons with Disabilities) is a cross-sectional study of health and accessibility to health services among persons with disabilities and was carried out in Itapecerica da Serra, Embu, Taboão da Serra and São Paulo, 2007, all cities are located in the metropolitan area of São Paulo. 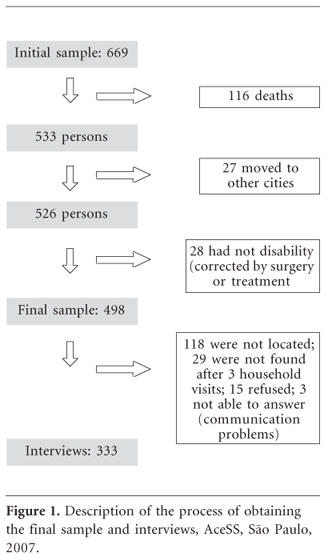 Data were collected by personal household interviews using a semi-structured questionnaire specially created for this survey. Different blocks of questions were provided for each of the four disability types. A block concerning cancer screening was contained in all questionnaires, regardless of the disability.

This study was approved by the Ethics Committee of the Public Health Faculty, University of São Paulo, and all participants signed an informed consent form.

The item about participating in cancer screening is dichotomous. When at least one of the following screening procedures was performed on the persons in the respective age and gender group, the answer to this variable was considered affirmative (exam performed):

2. Mammography for women over 39 years.

If persons were not in the specified age range for the screening procedure, their data were deleted from the database.

Descriptive statistics were used to analyze the frequencies with which the cancer screening procedures were performed on persons with disabilities. The number and percentages of persons from the four subsamples who participated in screening were related to demographic and health-service variables. Differences among subsamples according to categorical variables were calculated using the χ2-test, and χ2-test for trend was used when there were more than two categories for a variable, and a linear trend between the variables was assumed.

Three hundred thirty-three persons with disabilities from a total of 498 disabled individuals were interviewed, resulting in a response rate of 67%. The analyses were eventually performed for 297 persons because 36 were not in the appropriate age range for cancer screening. Table 1 describes the sample according to the variables studied.

Analyses of family head's income showed that cancer screening is performed more frequently among those who belong to families whose heads earn between 2 and 5 times the monthly minimum wage (50%). The group with less frequent cancer screening comprised persons whose family heads earn 8 or more times the monthly minimum wage (30%).

Regarding ethnicity, the prevalence of cancer screening performed was 43.58% among Caucasians, 44.86% among Blacks or Mulattoes and 55.56% among other ethnicities.

The comparison between those who used the health service during the study period and those who did not shows that the percentages of cancer-screening procedures according to use of health service in the last year were 44.66% and 43.18%, respectively. 22.88% of people with disabilities who needed help to bathe and dress, eat, get up, and walk participated in cancer screening, while 47.33% of those that did not need help had the same procedures.

Controlling for confounding variables (family head's income, private health insurance, and assistance required), the statistical significance (p < 0.05) persisted for disability (visual or hearing disability as compared to mobility), gender and quintiles of age (from 21 to 60 years old compared with persons between 80 and 97 years old).

Factors related to the rate of cancer screening have been widely reported. Among women, factors like age37,38, marital status39,40, family income41, ethnicity17, social status42, use of public-health services43, use of health services in the last year43, functional limitations44, and number of households members45 are mentioned. The studies with male samples, although less frequent, reported education46, ethnicity47, age48,49 poorer medical-insurance coverage50, use of public-health services50, and family income51 as factors influencing participation in cancer screening programs.

The analysis reported here also shows relationships among selected social variables and cancer screening among people with disabilities. While the family head's income, ethnicity, use of health services in the last year, and coverage by a family-health program were not statistically significant, disability, gender, quintiles of age, and the assistance required to bathe and dress, eat, get up and walk reached the 5% significance level. The variables family head's income, private health insurance, and assistance required were used for adjustment, i.e., these three variables had no influence on the dependent variable, although they should be considered due to their indirect influence on participation in cancer-screening programs. After adjustment, disability, quintiles of age and gender were still significant, showing a direct relationship with the screening procedures used.

Persons with mobility disabilities (paralysis or amputation) was the group with the lowest participation in cancer screening compared to persons with visual or hearing disabilities. This low participation among persons with mobility disabilities might be compared to the accessibility problems experienced by persons with paralysis or amputation52. Importantly, women had more screening exams than men, which conflicts with the literature53, which reports the opposite. For elderly persons in the US, men had more cancer- screening exams than women, and the decline with age was greater for women53. There is, therefore, a difference in patterns of cancer screening between men and women that further distinguishes people with and without disabilities.

There were more people aged between 21 and 60 that had preventive cancer exams than those between 80 and 97 years. This may be the result of health campaigns on cancer screening that reach a younger population more readily than an older one. The fact that younger people have better access to health information than the elderly may explain this difference. The internet may account for easy access to information by younger persons54.

A limitation of this study is that it is only exploratory and relies exclusively on cross-sectional data, identifying only association and the direction of association cannot be determined. A study with a larger sample needs to be conducted to confirm these results. Another limitation is that the data collected was self-reported, and confirmation of the screening exam by objective means, such as medical forms, and clinical assessment of reported disabilities by clinical examinations, would also improve the study. Recall bias and the report of Pap smear when in fact the women only had a pelvic exam55 could be another weakness of this research.

The characteristics of people with disabilities linked to whether or not cancer screening was performed presented here are different from those already reported in the literature. Type of disability, gender, and age are directly associated with participation in screening programs, while family head's income, private health insurance, and the assistance required to bathe and dress, eat, get up, and/or to walk had only indirect influence and were, therefore, confounding factors. The others variables studied were not statistically related to screening (ethnicity, use of health services in the last year, and coverage by the family health program).

The findings may be useful for the delineation and planning of health policies and programs for cancer prevention among persons with disabilities, as the study indicates that persons with disabilities have a different participation profile. Thus, specific health measures could be planned for this population group to increase the early detection of cancer and assistance offered by the health services.

SS Castro worked in the design, planning, data collection, monitoring, analysis and writing of the manuscript. A Cieza and CLG Cesar participated in the review and drafting of the paper.

We thank Professor Jerome Bickenbach for his helpful comments and review of the final manuscript.

5. World Health Organization (WHO). Cytological screening in the control of cervical cancer: technical guidelines. Genebra: WHO; 1988.

14. Gimeno SGA, Souza JMP. Using of stratification and the logistic regression model in the analysis of data of case-control studies. Rev Saude Publica 1995; 29(4):283-289.