Microcephaly in Pernambuco State, Brazil: epidemiological characteristics and evaluation of the diagnostic accuracy of cutoff points for reporting suspected cases

The increase in the number of reported cases of microcephaly in Pernambuco State, and Northeast Brazil, characterized an epidemic that led the Brazilian Ministry of Health to declare a national public health emergency. The Brazilian Ministry of Health initially defined suspected cases as newborns with gestational age (GA) ≥ 37 weeks and head circumference (HC) ≤ 33cm, but in December 2015 this cutoff was lowered to 32cm. The current study aimed to estimate the accuracy, sensitivity, and specificity of different cutoff points for HC, using ROC curves, with the Fenton and Intergrowth (2014) curves as the gold standard. The study described cases reported in Pernambuco from August 8 to November 28, 2015, according to sex and GA categories. The Fenton and Intergrowth methods provide HC growth curves according to GA and sex, and microcephaly is defined as a newborn with HC below the 3rd percentile in these distributions. Of the 684 reported cases, 599 were term or post-term neonates. For these, the analyses with ROC curves show that according to the Fenton criterion the cutoff point with the largest area under the ROC curve, with sensitivity greater than specificity, is 32cm for both sexes. Using the Intergrowth method and following the same criteria, the cutoff points are 32cm and 31.5cm for males and females, respectively. The cutoff point identified by the Fenton method (32cm) coincided with the Brazilian Ministry of Health recommendation. Adopting Intergrowth as the standard, the choice would be 32cm for males and 31.5cm for females. The study identified the need to conduct critical and on-going analyses to evaluate cutoff points, including other characteristics for microcephaly case definition.

To contribute to the discussion on the cutoff point for reporting suspected cases, the current study aimed to estimate the accuracy, sensitivity, and specificity of different cutoff points using the Fenton method and the curve proposed by the Intergrowth project 77. Villar J, Ismail LC, Victora CG, Ohuma EO, Bertino E, Altman DG, et al. International standards for newborn weight, length, and head circumference by gestational age and sex: the Newborn Cross-Sectional Study of the INTERGROWTH-21st Project. Lancet 2014; 384:857-68. as the gold standard. The Intergrowth curve was included in the analyses because it was developed recently, based on measurements of children from countries with different ethnic and economic characteristics.

The study analyzed a total of 696 suspected microcephaly cases reported to the SES-PE from August 2 to November 28, 2015 (epidemiological weeks 31 to 47).

The analyses excluded newborns with no recorded information on head circumference and/or gestational age and another two cases classified as recording errors (HC = 35cm and 45cm), leaving two cases with HC = 33.5cm, identified in the sample as suspected cases of microcephaly, leaving a total of 684 suspected cases.

The study began with a description of reported cases by distributions according to sex and gestational age categories.

To classify suspected microcephaly cases as positive or negative, we first used the Fenton tables and then the Intergrowth method (2014), which provide distributions of growth curves for head circumference according to GA and sex; positive (confirmed) cases were defined as newborns with HC below the 3rd percentile of these distributions. We also analyzed the time trend in suspected and confirmed cases according to epidemiological week.

ROC (Receiver Operating Characteristic) curves were used to evaluate the cutoff points for HC. The gold standard was first the Fenton curves and then the Intergrowth tables.

The study also analyzed differences in the proportion of confirmed cases according to the Fenton curve, by sex.

The criterion for selecting the "ideal" cutoff point was maximization of the area under the ROC curve, respecting the need for greater sensitivity than specificity, given the nature of the object of investigation (screening). The analyses were performed separately according to sex and GA categories.

The Intergrowth method, at the beginning of the epidemic, only provided growth curves of HC for new borns with GA ≥ 33 weeks. For consistency, only neonates with GA ≥ 37 weeks were included in the analyses using this method.

Finally, the study verified the concordance between the classifications obtained by the two methods, using the kappa coefficient. The analyses were performed with Stata, version 12 (StataCorp LP, College Station, USA).

Of the 684 reported cases, 599 were term/post-term neonates and 85 (12.4%) were preterm, a similar percentage to that of the general population according to the Brazilian Information System on Live Births (SINASC) for Pernambuco State in 2013. Seven preterm neonates had GA between 22 and 31 weeks. The majority of the reported cases were females (423 cases, or 62% of the total).

Notwithstanding the high number of false-positives, the 267 confirmed cases according to the Fenton criterion, reported over the course of 17 epidemiological weeks, represent a relative rate of 58 cases per 10,000 live births.

Figure 1 shows the distribution of suspected and confirmed cases according to the Fenton method, by epidemiological week.

Thumbnail
Figure 1:
Distribution of reported and confirmed cases of microcephaly according to the Fenton curve, by epidemiological week. Pernambuco State, Brazil, 2015.

Table 1 shows the sensitivity, specificity, and accuracy using ROC curves with the two methods. According to the Fenton criterion, the cutoff point with the largest area under the ROC curve, and respecting the need for higher sensitivity than specificity, was 32cm for both sexes. However, for females this cutoff point showed a specificity of 70%, while for males it was approximately 80%.

According to the Intergrowth method, the cutoff points using the same criteria are 32cm and 31.5cm for males and females, respectively.

Thumbnail
Table 1:
Accuracy, sensitivity, and specificity for definition of the cutoff point for head circumference with the Fenton curve and Intergrowth method as the gold standard.

Using the Brazilian Ministry of Health criterion (HC ≤ 33cm), classification of the Fenton curves for the 684 newborns reported as suspected cases of microcephaly shows 417 false-positives (61%).

Lowering the cutoff point for HC from 33cm to 32cm increased the accuracy of the case definition for microcephaly, by sex and GA, according to the Fenton method. Among term/post-term neonates of both sexes, the number of false-positives fell from 275 (45.9%) to 94 (15.7%).

Still, the adoption of a single cutoff point (32cm) for both sexes does not appear appropriate 99. Woods CG, Parker A. Investigating microcephaly. Arch Dis Child 2013; 98:707-13., since it results in a 10% drop in specificity for female term and post-term neonates, producing more false-positives in the latter group. This finding explains the large volume of reported suspected cases of microcephaly in females, despite the lack of a significant difference between the sexes in the proportion of positive cases.

Considering preterm neonates, a cutoff of 30cm produced 14 false-positives among the 85 suspected cases.

Since it shows higher specificity, the Intergrowth method pointed to HC = 31.5cm as the cutoff that produces the largest area under the ROC curve for males, compared to 31cm for females. However, since screening requires greater sensitivity than specificity, the choice would be 32cm for males and 31.5cm for females. Importantly, variation in HC measurements is possible in this epidemic, due to phenotypical characteristics such as excess scalp skin as a result of cerebral atrophy 1010. Schuler-Faccini L, Ribeiro EM, Feitosa IML, Horovitz DDG, Cavalcanti DP, Pessoa A, et al. Possible association between Zika virus infection and microcephaly - Brazil, 2015. MMWR Morb Mortal Wkly Rep 2016; 65:59-62.. The cutoff for HC in newborns should be sensitive enough to generate an excessive number of notifications. Adoption of the third percentile for the curves from the two methods as the classification criterion would mean reporting 3% of the term birth cohort as suspected cases of microcephaly 1111. Victora CG, Schuler-Faccini L, Matijasevich A, Ribeiro E, Pessoa A, Barros FC. Microcephaly in Brazil: how to interpret reported numbers? Lancet 2016; 387:621-4.. Meanwhile, the recommendation of lower cutoff points, that is, more specific and which would include lower percentages of births for investigation, might exclude cases that would warrant investigation to identify possible abnormalities.

In conclusion, critical and on-going analysis is necessary to support surveillance of microcephaly cases in newborns in the context of the current epidemic. Other clinical and/or phenotypical criteria should be explored, as well as findings from imaging tests, in order to establish a more accurate gold standard and improve the reporting, investigation, and treatment of cases. These aspects are crucial for improving knowledge of this new syndrome, probably associated with the Zika virus infection.

Thumbnail
Figure 1:
Distribution of reported and confirmed cases of microcephaly according to the Fenton curve, by epidemiological week. Pernambuco State, Brazil, 2015.
Thumbnail
Table 1:
Accuracy, sensitivity, and specificity for definition of the cutoff point for head circumference with the Fenton curve and Intergrowth method as the gold standard.
Thumbnail
Table 2:
Classification of newborns according to cutoff points adopted for head circumference: Fenton method, according to gestational age categories and sex; Intergrowth method, according to sex.

Figure 1:   Distribution of reported and confirmed cases of microcephaly according to the Fenton curve, by epidemiological week. Pernambuco State, Brazil, 2015.

Table 1:   Accuracy, sensitivity, and specificity for definition of the cutoff point for head circumference with the Fenton curve and Intergrowth method as the gold standard. 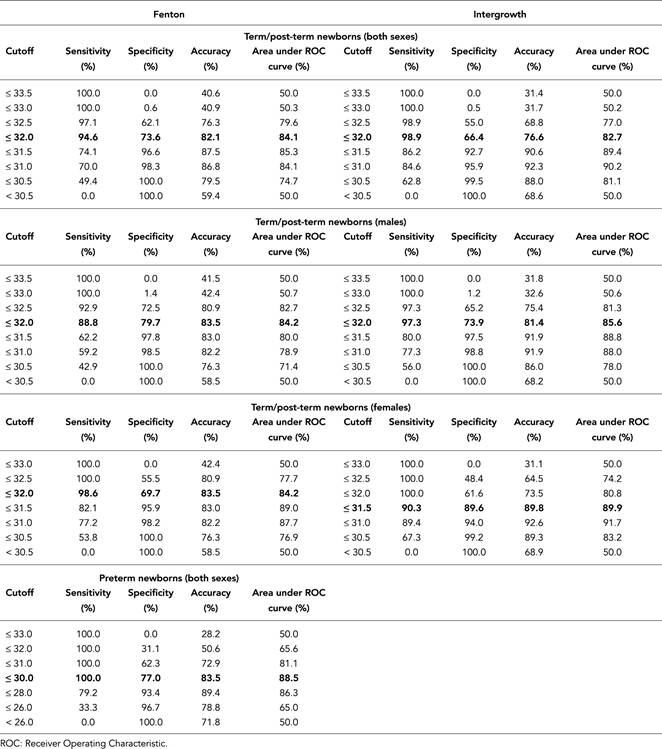 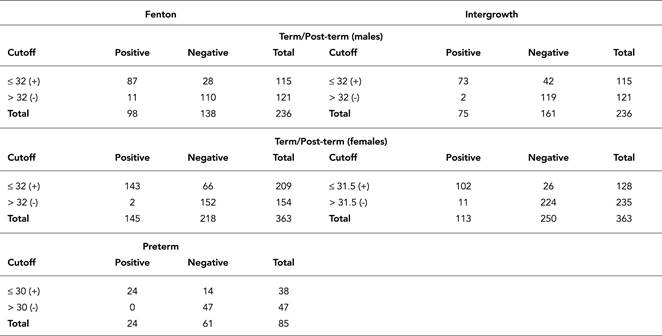