Crisis, conditioning factors, and challenges in the coordination of Brazil’s federative State in the context of COVID-19

When COVID-19 struck Brazil, the pandemic exacerbated the scenario of political, economic, and social instability that had marked the country since 2015. The political and institutional reality reveals a crisis of coordination with a strong federative dimension, manifested in various ways in public policies: impasses in cooperation between levels of government; lack of definition and juxtaposition of attributions and roles; difficulties with timely execution and integration of actions and services; leadership by some state and local governments, alongside negligence and omission by others; and insufficient transparency and conflicting information on COVID-19.

As the pandemic worsened and the health system was overrun in various cities, the clashes between the president, governors, and mayors became increasingly evident and heated, compromising the State’s response capacity and creating mistrust and insecurity in the population. In early June, 2020, Brazil had the second highest number of cases and deaths, following only the United States 11. Our World in Data. Coronavirus pandemic (COVID-19). https://ourworldindata.org/ (acessado em 23/Jun/2020).
https://ourworldindata.org/... .

This article aims to extract reflections on the crisis of Brazil’s federative State, seeking to contribute to the understanding of the conditioning factors and challenges for coordinating public policies and the Brazilian Unified National Health System (SUS) in the context of COVID-19. The article draws on two underlying arguments.

The first is that the factors constraining the State’s action in its federative dimension are varied, and originated before the pandemic emerged. Although the political tensions that have become more acute with COVID-19 are relevant, we highlight other political and institutional aspects (characteristics of the federative system) and historical and structural ones which also limit the government levels’ cooperation and performance.

The second argument relates to the need for integration between areas of public policy and cooperation between levels of government for the development of more effective measures to mitigate the social, economic, and health harms from COVID-19. Given the pandemic’s inherent dynamics, strategies and instruments for coordination involving multiple dimensions, actors, and decision-making and action scales are essential for implementing more comprehensive and integrated policies and actions.

Three groups of conditioning factors help understand the difficulties in the Brazilian State’s response to COVID-19, from the federative system’s perspective: the specificity of the federative arrangement; the existence of profound social and spatial inequalities; and the exacerbation of political conflicts between levels of government.

Thumbnail
Box 1
Characteristics of the Brazilian federative system with implications for the coordination of public policies and the Brazilian Unified National Health System (SUS).

Finally, a third group of conditioning factors involves the political sphere per se. The aggravation of political tensions in the current context results from divergences in political projects and partisan political disputes that have been exacerbated since 2014-2016, a period characterized by the reelection of President Dilma Rousseff by a narrow margin in 2014, difficulties with governability in 2015-2016, and Rousseff’s impeachment in 2016. The year 2018 was marked by the imprisonment of former President Luiz Inácio Lula da Silva and by intense electoral disputes, culminating in the election of rightwing President Jair Bolsonaro, with repercussions on the composition of the National Congress and the election of some governors who were “outsiders” to the political system (i.e., who had never run for elective office) in some important states of the federation, such as Rio de Janeiro, Minas Gerais, and Santa Catarina, plus the Federal District. Meanwhile, opposition governors were elected in the states of the Northeast. The intense changes in the political coalitions and in the composition of Administration’s top echelon in the first 18 months of the Bolsonaro government illustrate the scenario of instability and conflicts in Brazil’s recent period, with repercussions on health policy.

Even in this context, in the first months of confronting the pandemic (February and March 2020), the Brazilian Ministry of Health played an important role, mainly through mobilization for organization of the epidemiological surveillance system, coordinated by the Health Surveillance Secretariat and with participation by the Oswaldo Cruz Foundation, affiliated with the Ministry of Health. The National Congress approved additional budget resources for fighting the pandemic. In March, various state governments and some larger municipalities adopted strategies such as social distancing, economic and social measures, and strengthening of their health systems 99. Freitas CM, coordenador. A gestão de riscos e a governança na pandemia por COVID-19 no Brasil. Análise dos decretos estaduais no primeiro mês. Relatório técnico e sumário executivo. https://portal.fiocruz.br/sites/portal.fiocruz.br/files/documentos/relatoriocepedes-isolamento-social-outras-medidas.pdf (acessado em 23/Jun/2020).
https://portal.fiocruz.br/sites/portal.f... .

However, since April 2020, the difficulties with coordination in the federative system increased - between policy areas and between the Office of the Presidency and the Ministry of Health - culminating in two switches in the Health Ministers, with repercussions on the composition of the federal technical teams. Likewise, the differences in positions intensified between the federal, state, and municipal governments concerning measures to fight the pandemic, as well as between governments and groups in society (the scientific community, social movements), which hampered the coordination of efforts to confront the pandemic.

The incompatibilities of actions and discourses led to a unanimous ruling by the Brazilian Supreme Court that states and municipalities have the autonomy to declare social isolation measures. However, despite innovative initiatives such as the implementation of a scientific committee for confronting COVID-19, affiliated with the Consortium of Governors of the Northeast and the adoption of measures by the Councils of State and Municipal Health Secretaries to orient policymakers and workers in the SUS, these initiatives are still insufficient, with no effective interaction with the federal government.

Mechanisms of coordination are essential elements in the governance of public policies in federations 1010. Souza CM. Coordenação, uniformidade e autonomia na formulação de políticas públicas: experiências federativas no cenário internacional e nacional. Cad Saúde Pública 2019; 35 Suppl 2:e00046818.. From the formal point of view, they involve a series of strategies and instruments that favor the alignment of government efforts and tasks in the pursuit of common objectives.

COVID-19 poses huge challenges in Brazil for the coordination of public policies and the SUS. In any health emergency, strategies and instruments of coordination aim to create consistency between policies and actions in order to reduce redundancies, gaps, and contradictions in timely fashion. However, some elements are inherent to the COVID-19 pandemic itself and need to be addressed.

The factors that determine the transmission patterns, occurrence, and deaths from the disease are numerous and diverse, with extensive current and future impacts on the economy and society 1111. Werneck GL, Carvalho MS. A pandemia de COVID-19 no Brasil: crônica de uma crise sanitária anunciada. Cad Saúde Pública 2020; 36:e00068820.. The pandemic’s effects are heterogeneous and have a strong territorial dimension, given the important role of state and municipal governments in relation to containment measures, health care, social services, and public expenditures, placing them on the frontline of the crisis management 1212. Organisation for Economic Co-operation and Development. The territorial impact of COVID-19: managing the crisis across levels of government. Paris: Organisation for Economic Co-operation and Development; 2020.. There are also many uncertainties concerning the pandemic’s dynamic in a scenario of profound inequalities, heavy burden of disease, and precarious living conditions in a large contingent of the population 1313. Barreto ML, Barros AJD, Carvalho MS, Codeço CT, Hallal PRC, Medronho RA, et al. O que é urgente e necessário para subsidiar as políticas de enfrentamento da pandemia de COVID-19 no Brasil? Rev Bras Epidemiol 2020; 23:e200032..

Tackling these challenges requires coordination between public policy areas, and between government bodies. A comprehensive and timely response to the pandemic requires measures in the following areas, at least: detailed monitoring of the epidemiological situation, with rapid and transparent availability of the necessary information for government responses; clear communication strategies with various groups in society; social distancing measures to contain transmission of the virus and the increase in cases in the pandemic’s various phases; strengthening of the public health system, linking actions at all levels (health surveillance, primary care, urgent and emergency care services, and hospitals, including intensive care units); actions to support the economy and employment; social protection measures, especially for populations in situations of greater social vulnerability and the groups most affected by the disease. The global recession caused by the pandemic adds the need for medium- and long-term action focused on economic recovery and improvements in infrastructure (housing, sanitation) and living and health conditions in the populations in countries marked by inequalities, like the Latin American nations.

Given Brazil’s continental, diverse, and unequal characteristics, the set of strategies can vary between regions, states, and municipalities. However, given the Brazilian federation’s characteristics, the range of responses requires an active role by the federal government and intense cooperation between the national and state levels of government and on multiple regional scales.

In a huge and unequal federation like Brazil, the coordination of policies between areas and levels of government is essential to empower the State’s response to the health emergency. Various coordinated strategies are necessary to prevent the disease from spreading in successive waves in the national territory, prolonging the pandemic’s duration and its economic, social, and humanitarian consequences, considering the enormous number of lives lost, the suffering for thousands of families, and the potential breakdown in the social fabric in the midst of a complex and multifaceted crisis.

In Brazil, this process is exacerbated by a series of conditioning factors that limit the State’s action in the federative format. In this context, huge challenges remain for strengthening coordination in shaping the command structure and interaction between different organizations, clear sharing of management responsibilities and competencies between different bodies, and improvement of mechanisms for intergovernmental cooperation, between public policy sectors, and with different groups of society in the fight against COVID-19.

L. D. Lima and C. V. Machado are productivity grant recipients from the Brazilian National Research Council (CNPq) and are grateful for the support for carrying out studies on the topic.

All the authors contributed to the study’s conception and writing and critical revision of the article.

Thumbnail
Box 1
Characteristics of the Brazilian federative system with implications for the coordination of public policies and the Brazilian Unified National Health System (SUS).

Box 1   Characteristics of the Brazilian federative system with implications for the coordination of public policies and the Brazilian Unified National Health System (SUS). 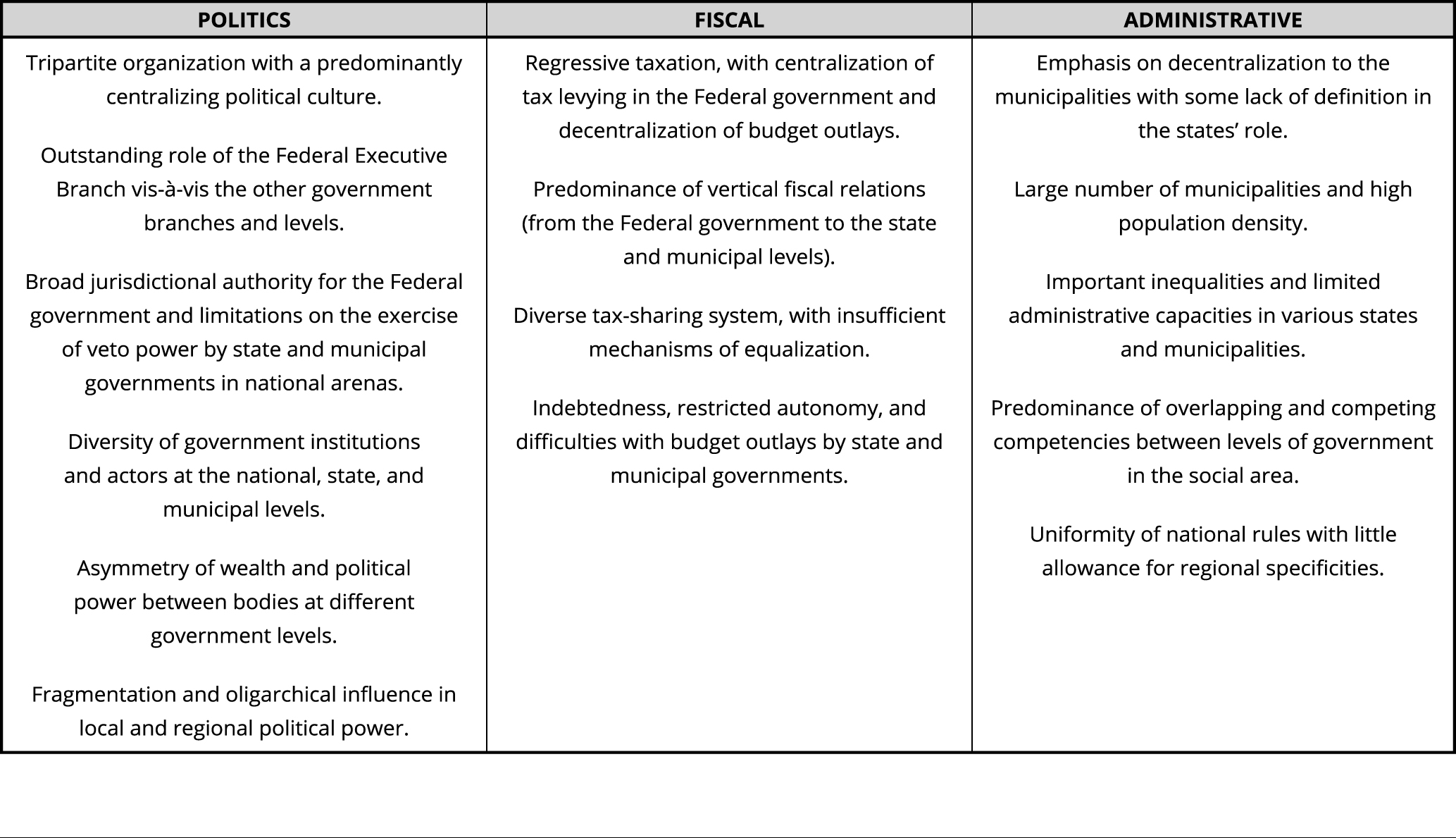 Source: prepared by the authors.