Objective: Borderline personality disorder (BPD) is a common personality disorder, with a population prevalence of 1.4-5.9%, although the epidemiology of this disorder in primary care is insufficiently known. Our objective was to determine the registered prevalence of BPD in primary care databases and to study the demographic and clinical characteristics of these patients.
Methods: We performed a cross-sectional study of the computerized databases of primary care clinical records. The target population consisted of all adults (> 16 years old) registered in the Catalan Health Institute (n = 4,764,729).
Results: The prevalence of recorded BPD was 0.017%, and was higher in patients with other mental disorders, particularly substance-abuse disorders (0.161%). These patients had twice as many appointments with the general practitioner as the general population (8.1 vs. 4.4).
Conclusion: The number of diagnoses of BPD recorded in primary care is extremely low, which contrasts with the available population-based data.

Borderline personality disorder (BPD) is a chronic psychiatric disorder characterized by emotional instability and difficulties in interpersonal relationships and impulse control. Patients with BPD often show self-destructive behaviors and are at significant risk of suicide.1,2 Functional deterioration can be considerable and persistent,3 and there are high rates of comorbidity with other mental disorders.4, 5 Epidemiological studies in the general population have reported prevalence estimations of between 1.4% and 5.9%.6, 7

Although little is known about the prevalence and characteristics of patients with BPD in primary care, they are often great users of health services8 and have been described as difficult, demanding, manipulative and unwilling to respect rules. In a sample of consecutive primary care patients, Gross et al.9 found a prevalence of 6.4% -about four times higher than the estimated population prevalence- that were frequently not detected or treated. The aim of this study was to determine the prevalence of BPD recorded in the databases of primary care medical records in Catalonia and to study the demographic and clinical characteristics of these patients.

Spain has a highly developed primary care system with universal coverage organized by catchment areas and providing care for over 97% of the population. Public health centers are staffed with general practitioners, pediatricians, nurses and other personnel. Doctors have a patient list and are gatekeepers to specialist care. Since medication can be expensive, even the population with duplicate coverage (private insurance bought on top of public coverage) that does not usually consult with their public sector general practitioner have an incentive to contact the health center in order to obtain subsidized official prescriptions. This system is linked to mental health care centers.10 Therefore, primary care databases register information on most of the population attended in the healthcare system. Our cross-sectional analysis focused on the database of the Information System for the Development of Research in Primary Care (Sistema d´Informació per al Desenvolupament de la Investigació en Atenció Primària [SIDIAP], IDIAP-Jordi Gol) database. This database contains all the primary care medical records of the Catalan Health Institute (Institut Català de la Salut [ICS]). The ICS is the main public supplier of healthcare in Catalonia and covers 76.6% of the population.11 The target population consists of all individuals aged 16 years old or over registered at ICS primary care centers.

We identified the proportion of patients with a diagnosis of BPD (code F60.3/ICD-10) recorded as an active health problem in their clinical record on 31/12/2010, regardless of the time when the diagnosis was registered. This overall figure was then broken down according to demographic characteristics (sex, age) and the presence of other mental disorders: substance abuse disorders, except nicotine (codes F10-19, except F17/ICD-10), psychotic disorders (codes F20-29/ICD-10), affective disorders (codes F30-39/ICD-10) and anxiety/neurotic disorders (codes F40-48/ICD-10). The odds ratios were calculated (95%CI) to evaluate how the presence of the recorded diagnosis of BPD was associated with these patient characteristics. For these calculations, we used the EPIDAT 3.1 statistical software. In individuals with BDP we investigated the use of psychiatric drugs, psychiatric comorbidity and the number of visits made to their general practitioner in a year.

Patients with BPD often had comorbid mental disorders, consisting of affective disorders in 26.3%, neurotic disorders in 38.1%, psychotic disorders in 5.1%, and substance abuse (most frequently alcohol) in 21.5%. These patients often consumed psychiatric drugs, particularly antidepressants (37.6%) and anxiolytics (37.4%). Of all the patients with BPD, 89.4% had visited their general practitioner during the year, with a mean of 8.1 visits per patient (Table 2). 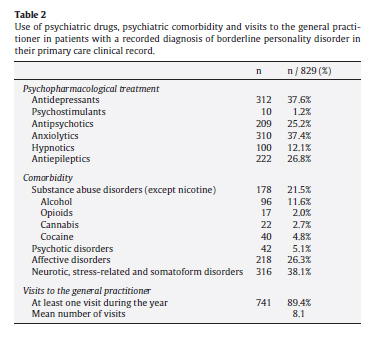 We found that 0.017% of adult patients had a diagnosis of BDP in their clinical records, a percentage that is a long way from the prevalences reported by epidemiological studies in the general population or primary care.6, 7, 9 The discrepancy between the data is clear: the recorded prevalence of BPD is 82 times lower than the population prevalence reported by Lenzenweger et al.6 (0.017% versus 1.4%). This difference is even greater if compared with the 5.9% reported by Grant et al.7 or the 6.4% reported by Gross et al.9 in primary care patients. Comparison of these epidemiological data with data obtained from clinical records is difficult but it can be assumed that if BPD is detected and diagnosed "appropriately", the prevalence of the diagnoses on record should be closer to the population prevalence. The substantial discrepancy between the two figures suggests considerable underdiagnosis. Importantly, all relevant information about health status should be recorded in the primary care medical records, whether the health problems are handled in the primary care setting or at other levels of care.

We were also able to show that the demographic and clinical characteristics related to the recorded diagnosis of BPD are in agreement with the data reported in epidemiological studies in the general population6,7 or clinical populations:1 the frequency was similar between both sexes (in psychiatric patients there tends to be a higher percentage of women1, 2 but in the general population the prevalence is similar in both sexes6,7), the prevalence decreases with age, and there are considerable comorbidity relations with other mental disorders, particularly substance abuse/consumption.12 Patients with BPD make considerable use of health services8 and this phenomenon was also the case in our primary care patients: on average, over the course of a year, these patients visited the primary care doctor twice as often as the general adult population in Catalonia13 (8.1 versus 4.4 annual visits).

The data used for this study have some drawbacks, however. The diagnosis of those patients with BPD mainly treated by psychiatric services may not be included in the primary care medical records. General practitioners may not be aware that a patient has been diagnosed with BPD and, even if they are, they may not see the usefulness of this diagnostic label as it may not have a substantial effect on the primary care therapeutic plan. In some cases, the physician may prefer to save the patient from the stigma associated with a diagnosis of a personality disorder.14 An added difficulty for appropriate diagnosis is that the name given in the ICD-10 -Emotionally unstable personality disorder- is quite different from the better known name used in DSM-IV -Borderline personality disorder.

Each year a large proportion of the population contacts primary care,13 mainly individuals with psychological distress. Primary care plays a fundamental role in the management of the most common mental disorders. Although BPD is generally managed by specialized mental health professionals,15 some authors have suggested that primary care should play a role in suspected diagnosis and in maintaining continuous care.15 Likewise, it has been stressed that general practitioners should be aware of the diagnosis of BPD in their patients because this disorder can affect how other common psychiatric disorders (e.g. depression, anxiety, somatization) or even disorders of an organic nature are managed (e.g. obesity, diabetes, AIDS, pain).16

To sum up, BPD is a diagnostic category that is used very little in primary care. This study confirms that there is a considerable gap between the real prevalence of BPD in the population and its prevalence in clinical records. This conclusion, however, generates new questions that need to be answered by future research to determine whether the use of this diagnostic category in primary care could improve the management of these patients and to establish the role that primary care could or should have in the detection and management of this disorder. 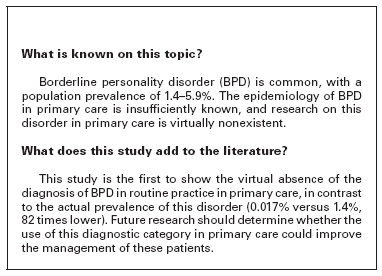 We are grateful to Francesc Fina of the SIDIAP (Information System for the Development of Research in Primary Care) for his kind collaboration in extracting the data used in this article.

Marc Ferrer is grateful for the support provided by the Plan on Mental Health and Addictions (Government of Catalonia, Health Department) and grants from the Obra Social-"La Caixa" Foundation.