Objective: To determine trends in the incidence of type 1 diabetes in Navarre (Spain) between 1975 and 2012 by age and sex.
Patients and methods: The study population comprised residents of Navarre under 15 years of age. A Poisson regression model was fitted to analyze changes in the incidence over time, adjusted by year of diagnosis, age group and sex.
Results: A total of 494 patients were registered, representing an adjusted incidence rate of 13.2/100,000 person-years. The annual relative increase in the incidence rate was 3.7%. The highest incidence was found in the group aged 10-14 years. The incidence among boys aged 10-14 tended to be higher than that in girls of the same age.
Conclusions: Since the year 2000, the incidence of type 1 diabetes among persons younger than 15 years in Navarre has been very high and has quadrupled over the last four decades.

The incidence of type 1 diabetes (T1D) in children under 15 ranges from 0.1/100,000 person-years in Venezuela to 57.6/100,000 in Finland.1 This variation could reflect differences in genetic susceptibility between populations, different exposure to environmental risk factors2 or differences in features and quality registers.3 In Spain, the incidence is very high (20.6)1 and, between Autonomous Communities, the highest incidence rate is twice that of the lowest.3

The highest incidence appears in the 10-14 age group, coinciding with puberty.4 In some populations, however, the 5-9 age group has the highest incidence.5 Furthermore, a shift to younger age of onset has been described6 and, in some countries, such as Sweden,7 Germany8 and Belgium,9 it has been debated whether there has truly been an increase in incidence in recent years, or just an earlier onset of the disease.

In order to determine whether there has been an increase in the incidence and/or a change in the age of onset in Navarre, this paper describes the changes over the past four decades in the incidence in children under 15 years, including characteristics in terms of age group and sex.

The study population comprises the residents of Navarre under 15 years of age. Information on patients diagnosed between 01/01/1975 and 31/12/1991 was obtained as described in the first study conducted in Navarra.12 Between 01/01/1992 and 31/12/2008; we used the same methods, using Primary Care computerized information systems as main secondary source since 2001. Information on patients diagnosed from 01/01/2009 to 31/12/2012 was obtained as described in our last publication.13

Confidence intervals were estimated at 95%, assuming an underlying Poisson distribution. A Chi-square test was used to compare incidence between groups (independence test), A Poisson regression model was used to analyze changes in incidence since 1975, adjusted for year of diagnosis, age group and sex, from which rate ratios were obtained, together with their 95% confidence intervals. Interaction terms were also included to assess whether time trend differed among age groups or sex, and removed if not significant. For statistical analysis, IBM SPSS Statistics 20 and R 2.13.1 were used.

This study has been reviewed and approved by the Navarre Research Ethics Committee. 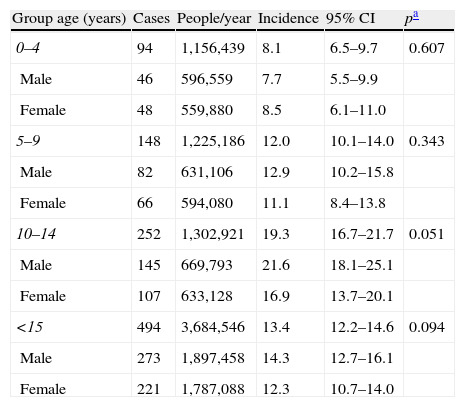 a - Results of the test comparing incidence between males and females. 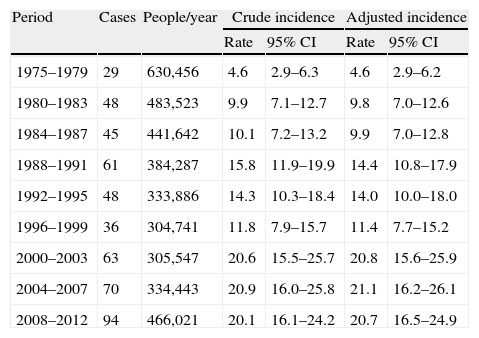 The incidence of T1D in children in Navarre increased over time, from 1975 to 2012, in the three age groups studied. The age group with the highest incidence was 10-14 years among all the study period, with an incidence rate over these years of more than twice that of children under five.

The strength of this study lies in its incidence data record of 38 years, a longer period than can be found in most published papers. In addition, the methods for collecting patients have been comprehensive from the start. Limitations include the fact that, for the size of the population of Navarre, the annual rates are not stable, showing large relative changes in magnitude. Moreover, there is always the possibility that the method has not succeeded in recording 100% of patients. Such an underestimation would be more likely in the early years of the study. However, even the data from the initial period, which is less complete (94.6%), is complete enough to be reliable and be included in the incidence study.

The increase is not linear, but does not suggest any cyclical pattern as described by other authors.6 The annual relative mean increase in the incidence rate is 3.7%, which is very close to the average for the EURODIAB data.4 although in our case, rates did not increase in the final decade of the study period, in line with the reported data from Oxford (UK), which are included in the EURODIAB group.

Some authors7-9 have questioned the increased incidence theory, suggesting that the data simply reveal an earlier age of onset. The present study reports increased incidence in all three age groups. Therefore, although it cannot be ruled out that there has been a shift in the age of diagnosis to childhood at the expense of adult patients, the authors are inclined to think that there has in fact been a real increase in the incidence of T1D and not a mere shift. This opinion is in line with Harjutsalo et al. in Finland.11 Moreover, in 2011, the same Swedish group that questioned the increase in incidence,7 published a paper again reporting that, since 2000, the age group with the highest incidence in children is the 10-14 year-olds.14

The incidence among boys tends to be higher than among girls in the 10-14 age group. This trend is consistent with results published from some European countries,11 It has been suggested that physiological changes due to puberty act as triggers for diabetes,13 which could explain the increased incidence in boys aged 10-14, since they reach puberty later than girls. However, in contrast to findings from other groups,15 no peak in incidence was observed in girls in the 5-9 age group. On the contrary, the incidence is still lower than in boys, suggesting that the difference in the timing of the onset of puberty does not explain the higher incidence observed in males aged 10-14.

In conclusion, the incidence of T1D in children under 15 in Navarre has quadrupled in the last four decades, with an annual relative increase in the incidence rate similar to that of neighbouring countries.

The authors thank to the other members of "Grupo de Estudio de Diabetes tipo 1 de Navarra", their collaboration in this study: 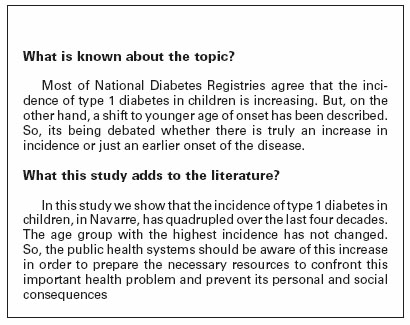