Characterization of spotted fever group Rickettsiae in ticks from a city park of Rome, Italy

Ticks are known to be vectors and important reservoirs for microbial agents that cause disease in humans and animals. Among these pathogens, the members of Rickettsia species play an important role in public health. The genus Rickettsia is divided into three groups on the basis of phenotypic criteria: the spotted fever group (SFG), the typhus group (TG), and the scrub typhus group (STG) which is absent in Europe [1].

The most common and well-known tick-borne rickettsiosis in Europe is the Mediterranean Spotted Fever (MSF). The MSF is due to Rickettsia conorii, but in the last decade other rickettsial species, such as R. slovaca,R. sibirica mongolotimonae,R. helvetica,R. monacensis,R. massiliae,Rickettsia aeschlimannii,R. africae or R. akari, were identified in the Mediteranean basin and have been implicated or potentially involved in human diseases [1]. In the past, identification and differentiation of rickettsiae were based exclusively on serological data, ecology, and epidemiology of these microorganisms. The discovery of these new species has been made possible by the use of molecular identification techniques. Molecular methods can offer a real burst in the investigation of novel Rickettsia species and/or their interaction with new vectors. In particular, PCR based method and DNA sequencing are helpful tools for the identification of rickettsial DNA in a variety of human specimens and arthropods, and allows the simultaneous detection of different microorganisms in the same sample. Monitoring vector distribution and the prevalence of tick-transmitted pathogens is therefore essential to describe and understand the risk of tick-borne disease.

In Italy, from 1998 to 2002, 4604 clinical cases of rickettsiosis with 33 deaths were reported [2]. Italian regions with elevated incidences of rickettsial diseases are Sicily, Sardinia, Lazio, and Calabria, while in other regions, rickettsiosis is sporadic [2].

Currently, in Italy, several studies are focused on molecular identification and characterization of Rickettsia spp. in ticks and human samples to verify the potential presence of species that have been recently discovered in other parts of Europe [3-8].

In order to provide a useful contribution in this field, we analyzed the presence of Rickettsia spp. in questing ticks collected in an urban park of Rome, during an entomological survey conducted in 2011 [9]. The aims of the present study were i) to investigate the prevalence of Rickettsia spp. in ticks collected in the public park of Rome, highly frequented by daily visitors and used for recreational activities; and ii) to characterize rickettsiae in infected ticks using molecular methods, including PCR, sequence, and phylogenetic analyses. Hereby we report the results of this investigation.

Questing ticks were collected in the Insugherata Natural Reserve, localized in the north-western sector of Rome and connected to the green zones outside the urban area. The park is characterized by woods and bush. Moreover, the reserve, with its Mediterranean climate hosts a rich fauna: foxes, weasels, and porcupines are very common, whilebadgers occur only sporadically. Many small mammals (Apodemus sylvaticus, Microtus savii, Suncus etruscus, Erinaceus europaeus, Talpa europaea, and Muscardinus avellanarius) and a great variety of birds, reptiles, and amphibians complete the wild fauna of the reserve. Only in the past few years, wild boar have spread from northern boundaries of the park. Tick collections were conducted in three selected sites within the park twice a month from January to December 2011, along transects of 100 m each for a total of 12 fixed transects covered per visit. Questing ticks were collected in all sites by dragging a 1 m2 woolen blanket through the vegetation [9].

Ticks were identified according to morphological characters [10],and stored at -80 ºC.

Ticks were individually dissected and homogenized under sterile conditions. Genomic DNA was extracted using Dneasy Blood and Tissue Kit (Qiagen, Hilden, Germany) according to manufacturing protocol. DNA samples were stored at -20 ºC and later used as templates for the PCR amplification.

Detection of Rickettsia spp. DNA was done with primers RpCS.877p-RpCS.1258n of the citrate synthase gene (gltA) [11]. Two different sets of primers of the groEL gene [12], were used for the discrimination between SFG and TG (Table 1). PCR products were resolved by electrophoresis on a 1.5% agarose gel, then stained with ethidium bromide, and visualized under UV light.

The genomic DNA of R. conorii and R. typhi, were used as positive controls in specific PCR analyses.

PCR products were purified by the QIAquick PCR purification kit (Qiagen, Hilden, Germany), and amplicons were sequenced in the forward and reverse directions with the same primer pairs used for the PCR amplifications. Sequencing was performed by Bio-Fab research (Italy; http://www.biofabresearch.it), and DNA sequences were compared with available databases in GenBank using the Basic Local Alignment Search Tool (BLAST) on http://blast.ncbi.nlm.nih.gov.

The rickettsial nucleotide sequences of the partial gltA, ompA and 17-kd genes were submitted to the NCBI GenBank.

The phylogenetic signal of each sequence dataset was investigated by means of the likelihood mapping analysis of 10 000 random quartets, generated using TreePuzzle [19].

For a quartet, just three unrooted tree topologies are possible. The likelihood of each topology is estimated with the maximum likelihood method and the three likelihoods are reported as a dot in an equilateral triangle (the likelihood map). Three main areas in the map can be distinguished: the three corners representing fully resolved tree topologies, i.e. the presence of treelike phylogenetic signal in the data; the center, which represents star-like phylogeny, and the three areas on the sides indicating network-like phylogeny, i.e. presence of recombination or conflicting phylogenetic signals. When using this strategy, if more than 30% of the dots fall into the center of the triangle, the data are considered unreliable for the purposes of phylogenetic inference.

A total of 325 questing ticks were collected, and a representative sample, randomly selected, of 129 ticks was processed for Rickettsia spp. analyses. Rhipicephalus turanicus was the most abundant species (66%) with 29 males and 56 females, followed by Ixodes ricinus (26%) with 11 males and 22 females, Dermacentor marginatus (5%) with 1 males and 6 females, and Haemaphysalis punctata (3%) with 1 males and 3 females. R. turanicus showed a seasonal pattern from spring to early summer, while I. ricinus and D. marginatus resulted active from October to May and from October to April, respectively. H. punctata was rare, with a seasonal activity in autumn-winter [9].

Out of the 129 ticks screened through the gltA gene target [11], 46 (36%) samples were positive for Rickettsia spp. In particular, rickettsial DNA was found in R. turanicus (22/85; 26%), I. ricinus (23/33; 70%), and D. marginatus (1/7; 14%), while any H. punctata tick was positive for the presence of the pathogen (Table 2). I.ricinus was about 2.5 times more likely to be infected by Rickettsia spp. than R. turanicus. Specific groEL PCR reactions for TG and SFG discrimination [12], determined that all rickettsiae belonged to SFG.

To determine the diversity of SFG rickettsiae, DNA from the 46 positive individual ticks was subjected to partial amplification and sequencing of gene encoding, ompA as previously reported [14]. The sequences obtained were compared to other bacterial sequences present in the GenBank database. A total of five different Rickettsia SFG species were identified.

Sequences from these eight ticks were identical to one another and, in support of a better characterization, the gtlA and the 17-kDa antigen partial gene sequences were also performed and compared in the GenBank [13, 15].

The phylogenetic noise of each data set was investigated by means of likelihood mapping. The percentage of dots falling in the central area of the triangles was 28% for the first dataset, 11.2% for the second dataset, and 15.6% for the third dataset: as none of the datasets showed more than 30% of noise, all of them contained a sufficient phylogenetic signal (Figure 1 a, b, c). 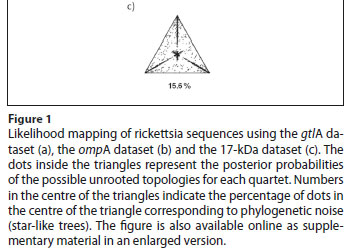 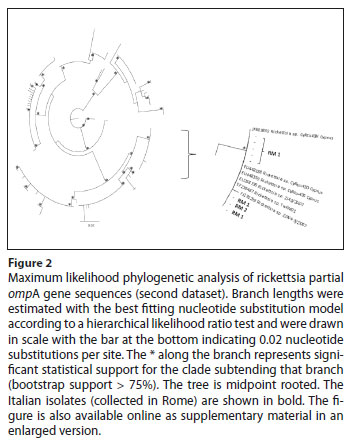 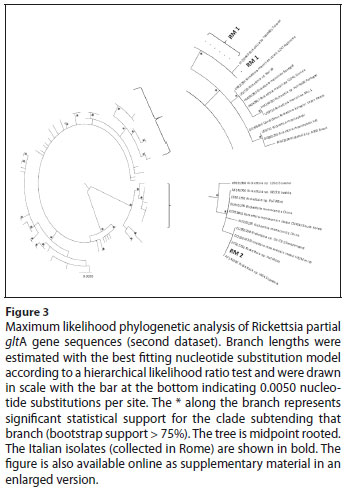 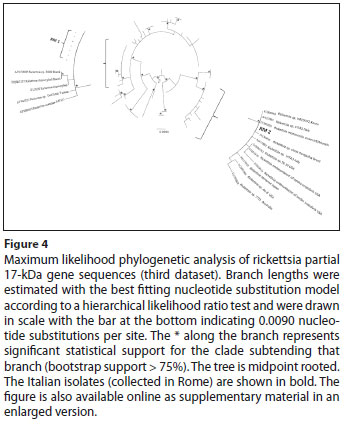 Worldwide, ticks are important vectors of human and animal pathogens and a variety of tick-borne infections are considered of medical interest. Several European studies conducted in ticks revealed that the prevalence of Rickettsia SFG ranges from about 3% to 15% [21, 22].

Tick-borne pathogens can occur not only in natural woodlands, but also in recreational urban areas [23-26]. However, to the best of our knowledge, only one investigation was conducted in public parks in Italy, showing the presence of Bartonella spp., B. burgdorferi s.l., and Rickettsia spp. [27].

In view of this fact, we planned a one-year survey to investigate Rickettsia spp. Pathogens in ticks collected in the Insugherata Natural Reserve of Rome located in the north-western outskirts of the city. The main tick species found were R. turanicus and I. ricinus [9], which are well-known vectors of several animal and human pathogens recognized in Italy [28-31].

The results of our study in questing ticks demonstrated an expected occurrence of Rickettsia SFG, as previously described [2].

Although the presence of rickettsia in ticks is expected, our results document for the first time the detection of these agents, in an urban park of Italy. In particular, three human pathogens (R. conorii, R. massiliae and R. aeschlimannii), and two putative new strains with unknown pathogenicity Rickettsia sp. strain RM1 obtained from seven individual R. turanicus, and Rickettsia sp. strain RM2 found in one I. ricinus tick, were detected.

Even if not all rickettsiae detected in this study may be considered human pathogens, their infectivity and potential pathogenicity remains to be further examined. Actually, several Rickettsia spp., originally detected in ticks and characterized as unknown pathogenicity, were subsequently demonstrated to be human pathogens, as reported for R. massiliae and R. monacensis [4, 8].

Moreover, the nonspecific feeding habits of these ticks with the involvement of a wide variety of vertebrates, which are potential reservoirs for several tick-borne pathogens, highlight the potential risk of transmission of multiple infections. In the context of public health, the clinical implications of tick-borne polymicrobial infections may be crucial for planning prophylactic measures and for limiting the probability of misdiagnosis.

Our data suggest that atypical cases of rickettsiosis due to agents other than R. conorii might occur. Microbiologists and clinicians should be alerted about the presence of new species of rickettsiae in our Country, especially in public parks located in an urban area. For that reason, continuing entomological surveys supported by clinical investigations and identification of rickettsiae in patients, through blood specimens and swabbing eschars analyses, could be an essential aspect to characterize distinct tick-borne rickettsioses occurring in Italy.

However, the epidemiological significance of these results must be taken with prudence, because the presence of a pathogen in ticks does not necessarily mean certain transmission to susceptible hosts. In spite of this, our investigation may be important and helpful for further epidemiological studies of tick-borne pathogens in urban areas in Italy and for the risk prevention associated with tick-borne pathogens transmission to humans and animals.

We would like to thank Luca Marini and the local authority, Roma-Natura, for providing us with the opportunity to carry out this study in the Insugherata Natural Reserve.