After reportedly surpassing Bill Gates as the world's richest man, Mexican telecommunications magnate Carlos Slim Helú is now charting a similar course to the Microsoft guru in the health field, investing millions to improve the well-being of people in the developing world.

With increasing global attention on public health as an integral player in development, Slim has created his Carso Health Institute to fund health-related projects and research health priorities in Latin America.

To close observers, this approach marks an important shift from the philanthropic work of entities like the Bill and Melinda Gates Foundation and the Global Fund to Fight AIDS, Tuberculosis and Malaria, which are designed primarily to provide much-needed funding to support health programmes.

"The operating model is not that of a reactive institution that receives proposals," said Frenk, also a senior advisor at the Gates Foundation and board chairman of the newly formed Institute for Health Metrics and Evaluation, a collaboration between Gates and the University of Washington State. "It's rather one of a proactive institution that has its own internal people carry out prospective analyses, define an agenda on the basis of that analysis and actively pick partners to be in a position to carry out that agenda."

Slim is endowing the Carso Health Institute, which began operations in May 2007 and will be formally launched in September, with $US 500 million. He is also creating two other institutes. The Carso Education Institute and the Carso Sports Institute, will focus on education and creating athletic opportunities for Mexicans without access to state-run sports activities. These institutes are still in the process of being formed.

The Carso Health Institute, named after the first syllable of Slim's first name and that of his late wife, Soumaya, is part of his pledge to increase the endowments of his charitable foundations from US$ 4 billion to US$ 8 billion over the next four years. These include the Telmex Foundation, an offshoot of his telephone company, Telmex, and the Carso Foundation, his family charity.

The Carso Health Institute is geared toward researching priority health issues in Latin America, with a focus on maternal and child health and the Millennium Development Goals (MDGs), as well as on globalization and noncommunicable diseases and injuries. Its next step is to conceive projects, then look for groups to implement them. At the same time it will accept proposals matching its agenda to "mobilize private resources to finance projects of public interest in the areas of health, nutrition, and the environment," an institute statement said.

It has a six-point strategy for seeking health solutions. First is investigation or research to discover new solutions, either from scratch or by adaptation, Frenk told the Bulletin. That leads to the second item: innovation. The third is implementation, or "just do it," as Frenk put it.

Fourth is bolstering institutions through scholarships, funding libraries and other resources in health-related institutions. Item five, investment, is getting the money to actually fund the activities. To help this along will be item six, information, dissemination and evaluation of everything that is being done. 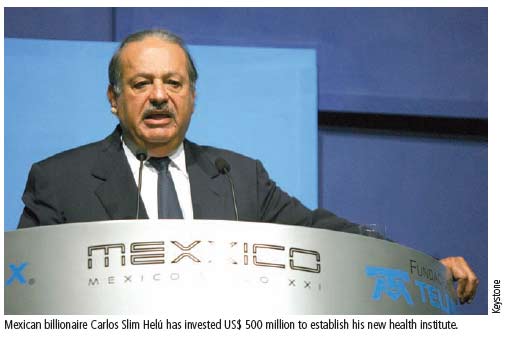 Within these are six priority lines of action, Frenk said, including closing social gaps standing in the way of MDGs 4 and 5 in Latin America, which relate to maternal and under-five mortality. Frenk said there is also a need to address the "growing epidemic" of noncommunicable diseases and injuries, given that, according to the 2003 World Health Report, three in four adult deaths in Latin America are caused by noncommunicable diseases.

The institute will also look at new ways of organizing health services, especially in rural and poor urban areas, and create a communications strategy to enable people to take care of their own health, Frenk said.

Staffing will be minimal so as to funnel as much money as possible into actual projects, Frenk said, and rigorous performance measures will determine whether to keep funding a programme.

As Frenk was helping develop the institute's concept, he met Nancy Birdsall and Ruth Levine of the Washington DC-based Center for Global Development to explain his ideas and get their input. Levine said the new institute has some distinctive features.

"I don't know of other organizations precisely like this one in Latin America, which will be both a 'think tank,' in a way, as well as a significant funder of programmes and research," Levine told the Bulletin. "I am not sure it's unique, but it is certainly unusual."

By way of comparison, Levine said that the Gates Foundation is much bigger than Carso and provided grants in education in the United States of America as well as international health. Gates has also expanded to encompass global development programmes in areas such as agriculture and microfinance.

But the Gates Foundation does not perform in-house research, except as it relates to its own work, Levine added, whereas Carso plans to conduct its own studies. Moreover, Gates has put much of its resources into biomedical technology development for health, and it seems unlikely that the Carso Institute will share this focus, she said.

Latin America has seen a "rapid, complex epidemiological transition" from communicable to noncommunicable diseases which has changed the main causes of death in recent decades, a September 2006 essay in the Public Library of Science (PLoS) online medical journal said. Since the 1990s, noncommunicable diseases and injuries accounted for 69% of deaths and 65% of disability-adjusted life years (DALYs). The pattern continued through 2000, with 73% of deaths and 65% of DALYs caused by NCDs, according to the September 2006 PLoS report entitled Noncommunicable Diseases and Injuries in Latin America and the Caribbean: Time for Action.

"This dominance of NCDs and injuries over infectious disease is expected to rise significantly by 2020," said the report, citing causes such as increased social inequality and unhealthy lifestyles.

Levine said that a "profound transformation" is needed to deal with these "new epidemiological patterns." "I certainly think that it (Carso) has tremendous potential to stimulate innovation and learning in public health finance and delivery  for example, in developing and testing new [ways] of [providing] basic health services to socially marginalized populations," she added. 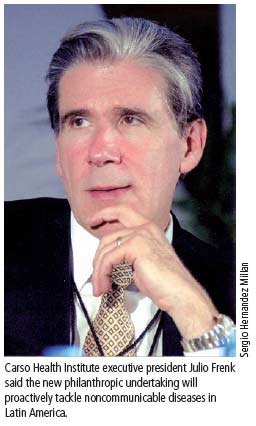 Frenk hoped Slim's involvement would inspire other wealthy people to undertake philanthropy. The Mexican billionaire's leadership, Levine added, could indeed have that effect, noting that it reflected a growing trend worldwide, led by Canada, the United States of America and European countries, for "extraordinarily wealthy" people to donate their fortunes during their lifetimes rather than leave a bequest.

"This is not yet the case in most other parts of the world, but Carlos Slim could be part of the leading edge," Levine said. "I think the jury is out on whether that will happen."

Slim appeared committed. "We are serious about this," he told US magazine Business Week recently, emphasizing his desire to address some of Latin America's socioeconomic woes. "We will make sure enough resources are available for anything that needs to be done."