School of Human Movement and Nutrition Sciences, The University of Queensland. Brisbane Australia.http://orcid.org/0000-0003-4568-6440

This article aims to describe the reasons for sport participation in the Brazilian adult population according to gender, age and schooling level. This is a cross-sectional study with data from a National Household Sample Survey - 2015. The reasons to practice or not practice sports in the previous year were obtained by questionnaire with predetermined answer options. All analyses were performed in Stata 12.1 and stratified by gender. The prevalence of sports participation for men and women were 31.7% and 16.9%, respectively. The most frequent reasons for sports participation among men were: having fun, quality of life and performance. Among women, the most frequent reasons were: quality of life, performance and medical recommendation. Regarding reasons for not practicing sports, the most reported ones were: lack of time (38.8% for men and 37.8% for women), not enjoying (34.8% for men and 35.3% for women) and health problem (20.3% for men and 17.9% for women). The study findings showed the most frequent reasons for sport participation in Brazil. Understanding these reasons and how they affect different age ranges and educational levels may contribute to improve strategic planning to promote sports in middle-income countries.

Sports is a subset of physical activity, which has been suggested as a promising strategy to improve population levels of physical activity and health55 Khan KM, Thompson AM, Blair SN, Sallis JF, Powell KE, Bull FC, Bauman AE. Sport and exercise as contributors to the health of nations. Lancet 2012; 380(9836):59-64., since it brings together well documented physiological and psychological benefits of exercise making exercise more pleasant66 Chalip L. Toward a distinctive sport management discipline. J Sport Manage 2006; 20(1):1-21.,77 Leipert BD, Plunkett R, Meagher-Stewart D, Scruby L, Mair H, Wamsley KB. "I can't imagine my life without it!" Curling and health promotion: a photovoice study. Can J Nurs Res 2011; 43(1):60-78.. Regarding sports participation in Brazil, estimates showed football as the most frequent practice in the country (7.2%), and other sports present irrelevant prevalence compared to walking or exercise in general88 Sa TH, Garcia LM, Claro RM. Frequency, distribution and time trends of types of leisure-time physical activity in Brazil, 2006-2012. Int J Public Health 2014; 59(6):975-982.. This may reinforce the need for a more detailed understanding of active lifestyle promotion via sports participation in the country.

Sports participation may vary according to regions and cultures55 Khan KM, Thompson AM, Blair SN, Sallis JF, Powell KE, Bull FC, Bauman AE. Sport and exercise as contributors to the health of nations. Lancet 2012; 380(9836):59-64., gender, age and education. Thus, the focus of physical activity and sports promotion needs to be adapted to the preferences, barriers and specificities of each country. However, there has been little research investigating determinants and barriers of recreational sports participation, particularly in low and middle-income countries and at populational level. Therefore, the present study aims to describe the motivations for participation and non-participation in recreational sports among Brazilian adults.

Data from the National Household Sample Survey (PNAD) carried out in 2015 were analysed. The PNAD is a representative survey which investigated general characteristics of the Brazilian population, including education, occupational activities, income, and home environment in an annual basis. A probabilistic sample was obtained using three selection stages: primary (cities), secondary (census tracts) and tertiary units (households). This study used public domain data without identification of the subjects. Furthermore, PNAD is part of the current Brazilian surveillance system and is exempted of ethical clearance according to the Resolution of the Brazilian National Health Council 466, 12 December 20121616 Brasil. Ministério da Saúde. Resolução nº 466, de 12 de dezembro de 2012. Diário Oficial da União 2012; 13 dez..

Participation in recreational sports in the previous 12 months was assessed using the following question: “In the previous 12 months, have you done any sports during your leisure time?” Those who reported participation in sports in the previous period were also asked about the main reason for their engagement. The subject was supposed to choose one reason among the following: a) medical recommendation; b) performance; c) quality of life; d) enjoys competing; e) having fun; f) socialize and meeting with friends or making new friends; g) other reason. Those who did not report sports practice were also asked the main reason for not doing so choosing one reason among the following: a) lack of time; b) health related problem or advanced age; c) financial problems; d) lack of proper accessible sports facilities; e) lack of companionship for practicing sports; f) not enjoying; g) other reason.

Initially, descriptive analyses were conducted to estimate not only the prevalence of participation in recreational sports but also the 95% confidence interval (95% CI) in each gender according to age groups (15-19; 20-29; 30-39; 40-49; 50-59; 60+ years old) and education (none; incomplete primary level; complete primary level; secondary complete level; graduation). Secondly, sports participation reasons prevalence and 95% CI adjusted for age and education were calculated. Lastly, the associations between age and education with the three more frequent reasons for participation and non-participation in sports were investigated using Poisson regression models with adjustment for age and education. All analyses were conducted in Stata 12.1 using the svy command to consider sample weight.

Thumbnail
Table 1
Description of the sample and sports participation according to age and education and stratified by gender. Individuals aged 15 years and over (total n: 71,142).

Reasons for participation in recreational sports

Thumbnail
Graphic 1
Prevalence of the reasons for having practiced sport in the past year according to gender (n men: 10,080; n women: 6,550).

Thumbnail
Table 2
Adjusted analysis of the main reasons for practicing sports in the past year for men and women according to age and education.

Reasons for not having practiced sport

Thumbnail
Graphic 2
Prevalence of the reasons for not having practiced sports in the past year according to gender (n men: 22,763; n women: 31,749).

Thumbnail
Table 3
Adjusted analysis of the main reasons for not having practiced sport in the past year, stratified by gender, in individuals aged 15 years or over

So far, only one study has investigated reasons for sports participation in Brazil, in a sample of 100 men and 138 women from a northern city in the country. Despite the sample size, it was observed that men were more motived for social experience with sports; young adults for enjoyment and improvement in appearance, and more educated individuals were motivated for health and fitness1515 Bastos AA, Salguero A, Gonzalez-Boto R, Marquez S. Motives for participation in physical activity by Brazilian adults. Percept Mot Skills 2006; 102(2):358-367..

The reasons for not practicing sports were similar between men and women. The most frequent reason was lack of time, corroborating with previous studies2121 Bowles HR, Morrow Jr. JR., Leonard BL, Hawkins M, Couzelis PM. The association between physical activity behavior and commonly reported barriers in a worksite population. Res Q Exerc Sport 2002; 73(4):464-470.. This reason was more frequent not only in the 20-59-year-old group but also in individuals from higher schooling levels, which might be related to work responsibilities in these groups2323 Burton NW, Turrell G. Occupation, hours worked, and leisure-time physical activity. Prev Med 2000; 31(6):673-681..

Over 35% of the sample reported that they did not enjoy sports. This reason was more often reported by younger and lower educated individuals. Good and early experiences with exercise may contribute to a higher level of physical activity in adult life2424 Reichert FF, Barros AJ, Domingues MR, Hallal PC. The role of perceived personal barriers to engagement in leisure-time physical activity. Am J Public Health 2007; 97(3):515-519..

The main limitation of this study is information on sports participation. The used questionnaire does not specify the frequency for practicing sports in the previous year, which can implicate in misclassification. Thus, sports participation in our study includes both individuals with regular practice and sporadic practice. This limitation may result in overestimation of the presented prevalence.

The strength of this work is the availability of information about sports in a representative sample from a middle-high income country. In contrast to the research in the physical activity area, sports information is still scarce in a national context, and the majority of the studies with sports are carried out in high-income countries or evaluate convenience samples.

Our study presented the most frequent reasons for sports participation in Brazil according to gender, age, and education. Sports interventions should be focused on barriers and motivation of the targeted population. Thus, this study may help to understand the reasons for practicing and not practicing sports associated with different age ranges and educational levels. This study may also contribute to better planning of strategies to promote sports and improve interventions in middle-income countries.

A Wendt, SC Costa and LIC Ricardo conceived of the presented idea. A Wendt performed the data analysis. A Wendt, SC Costa, LIC Ricardo, FS Costa, TR Flores and RG Neves carried out data interpretation and wrote the paper. Mielke GI supervised the findings of this work. All authors discussed the results and contributed to the final manuscript. 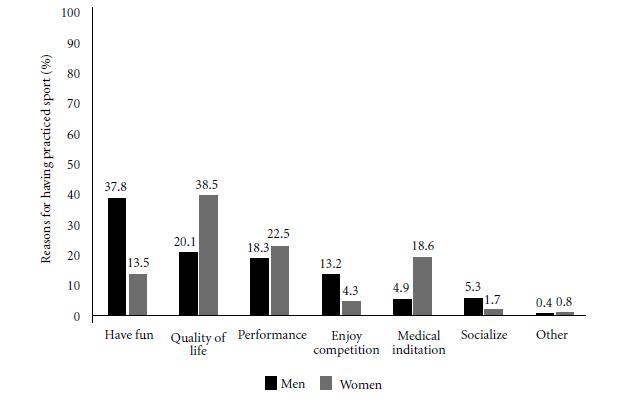 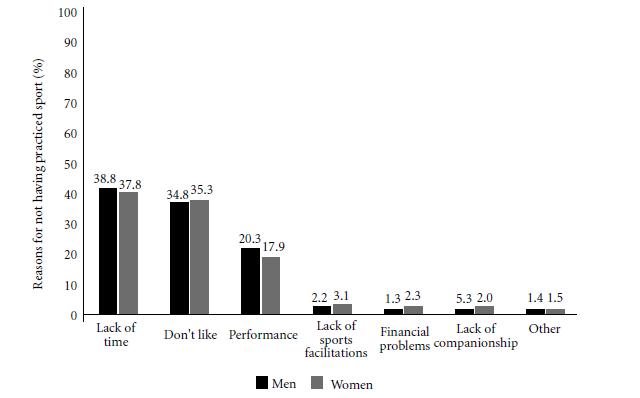 Table 1   Description of the sample and sports participation according to age and education and stratified by gender. Individuals aged 15 years and over (total n: 71,142).

Table 2   Adjusted analysis of the main reasons for practicing sports in the past year for men and women according to age and education.

Table 3   Adjusted analysis of the main reasons for not having practiced sport in the past year, stratified by gender, in individuals aged 15 years or over