Living under the influence: normalisation of alcohol consumption in our cities

Measuring the urban environment in relation to alcohol

The pervasiveness of alcohol products in our urban landscape may have favored the normalization of alcohol consumption with disproportionate implications to those who are constantly exposed to a wide variety of alcohol products and advertisements. As part of the European Research Council funded project Heart Healthy Hoods77. Carreño V, Franco M, Gullón P. Studying city life, improving population health. Int J Epidemiol. 2015, pii: dyv207. and of the Plan on Drugs for the city of Barcelona88. Brugal MT, Guitart AM, Espelt A, editors. Pla d'Acció sobre Drogues de Barcelona 2013-16. Barcelona: Agència de Salut Pública de Barcelona; 2013. 110 p. we are developing specific tools characterizing the presence of alcohol in the urban environment in Barcelona and Madrid. As we directly observed the neighborhoods and streets of these cities we realized that alcohol product availability, its marketing and promotion and visible signs of alcohol consumption are always present in our cities. On the one hand we observed the constant presence of alcohol outlets, both in-premises and off-premises ensures, through different opening times by type of outlet, an extensive supply of alcohol products at different times during the day (panel A in Fig. 1). On the other hand we collected data on the high visibility of alcohol consumption in the street in terms of people consuming alcohol or the presence of discarded bottles or other containers in the public space (panel B in Fig. 1), not only indicating the acceptability of alcohol, but also suggesting incomplete enforcement of existing alcohol related regulations. Finally, the ever presence of alcohol promotion and marketing leads public health practitioners to think about possible policies related to alcohol. Although the direct advertising of spirits is prohibited in Spain in public roads, indirect advertisement and sponsorship are frequently used to circumvent this ban. Alcohol advertisements are present in many alcohol outlets, mainly in in-premises. For example, hospitality venues use their storefronts and terraces to promote alcohol beverages offering drinks at discount prices and advertising beverage brands (panel C in Fig. 1). Moreover, in touristic areas and city centers the marketing and promotion of alcohol are highly visible and evident. We can even find public relations staff offering alcohol discounts and promotions in alcohol drinks.

Within the European Union, policies regulating the alcohol retail environment, marketing and advertising of alcohol vary across countries, and sometimes across jurisdictions within a country, with different levels of restrictions. Advertising restrictions in European countries are inversely associated with the prevalence of risk consumption of alcohol in people aged 50-64 years.99. Bosque-Prous M, Espelt A, Guitart AM, et al. Association between stricter alcohol advertising regulations and lower hazardous drinking across European countries. Addiction. 2014;109:1634-43. In Spain the sale of alcohol at certain times and places is regulated and its sale to people under 18 is always prohibited. However, the availability of alcoholic beverages at a relatively low cost is the common norm in our environment, and the deregulation of retail trade favored by European Directives has made alcohol availability at night even greater, especially in large cities.1010. Villalbí JR, Bosque-Prous M, Gili-Miner M, et al. Políticas para prevenir los daños causados por el alcohol. Rev Esp Salud Pública. 2014;88:515-28. Similarly there are policies that partially regulate direct and indirect alcohol advertising in certain public places. However, the pressure by the alcohol industry is evident, and circumventing existing regulation with different strategies such as using sponsorship to advertise spirits or using alcohol outlets to advertise its products via promotions or discounts.

Further research should help studying exposure to alcohol urban environment and its association with alcohol consumption and drinking patterns. It is also important to understand the attitudes and practices in relation to alcohol consumption from a cultural and social perspective. Interdisciplinary and innovative approaches are necessary to understand such a complex topic. Future research should combine different quantitative methodologies with the use of qualitative research techniques. Finally, new tools should be developed to systematically characterize the domains of the urban environment that could affect alcohol behavior.

Our experience was based in the cities of Barcelona and Madrid. Our results are part of the project Heart Healthy Hoods that aims to study the associations between the social and physical features of the urban environment in relation to population cardiovascular health. Urban environments have proved to be excellent candidates for research and policy evaluation of population approaches to prevention and, cities, due to their characteristics, show multiple contexts relevant to health.33. Franco M, Bilal U, Diez-Roux AV. Preventing non-communicable diseases through structural changes in urban environments. J Epidemiol Community Health. 2015;69:509-11. The study of urban environments in relation to alcohol wants to highlight the importance of understanding cities in relation to alcohol behavior: previous studies of contextual factors in relation to alcohol use have been developed in urban areas, and there is clearly a need for research on rural areas, although it is out of our reach.44. Bernstein KT, Galea S, Ahern J, et al. The built environment and alcohol consumption in urban neighborhoods. Drug Alcohol Depend. 2007;91:244-52.

5. Bryden A, Roberts B, McKee M, et al. A systematic review of the influence on alcohol use of community level availability and marketing of alcohol. Health & Place. 2012;18:349-57.-66. Popova S, Giesbrecht N, Bekmuradov D, et al. Hours and days of sale and density of alcohol outlets: impacts on alcohol consumption and damage: a systematic review. Alcohol Alcohol. 2009;44:500-16. Future research should also include these areas to have a complete picture of residential environments in relation to harmful use of alcohol.

Building evidence about the exposure to key urban elements and understanding which cultural and social norms may influence alcohol behaviors is critical to support policy interventions aimed at controlling alcohol use. The evidence derived from the characterization of alcohol environment could serve as a basis for policy makers to reduce alcohol exposure and, as a consequence, favor the process of denormalization of alcohol use contributing to reduce alcohol-related health burden and health inequalities.

The authors would like to thank Lucía Baranda, Sonsoles Fuentes and Lucía Moure for participating in the fieldwork.

All the authors contributed substantially in the design, execution of this work, and to the interpretation of results. X. Sureda drafted the manuscript, which was critically revised by all authors, who also approved the final version. 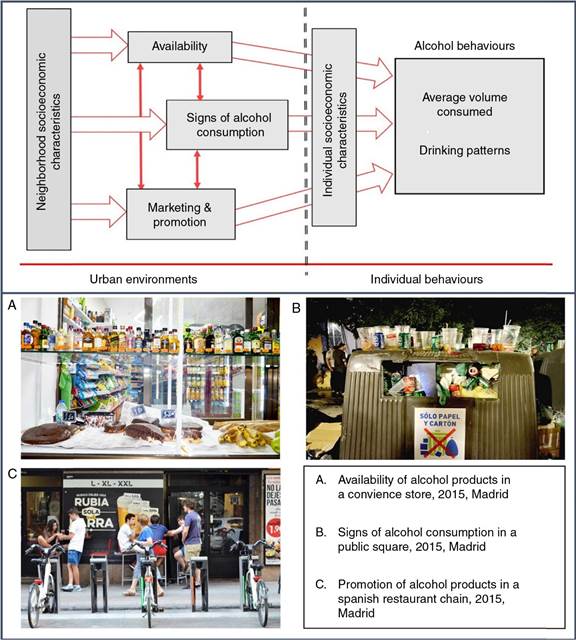 SciELO Analytics
Dimensions
Living under the influence: normalisation of alcohol consumption in our cities
PlumX