A descriptive observational study was carried out to identify the characteristics of the oncological clinical trials submitted to the Instituto Nacional de Salud del Perú during the period from 1995 to 2019. The information was obtained from the Peruvian Registry of Clinical Trials. We identified 1,996 clinical trials during the studied period, from which 470 were oncological (23.5%); 74.9% of the oncological clinical trials were mainly sponsored by the pharmaceutical industry, 61.9% were phase III and 86.2% were authorized. Regarding those authorized clinical trials, 55.6% were on chemical research products and 35.9% were on therapeutic indication for breast cancer. The most frequent study designs found were: parallel arm (84.7%), randomized (85.2%) and blinded (51.0%); the most frequently used main endpoint was the objective response rate (46.7%). We conclude that the number of oncological clinical trials has been increasing over the years, often with different characteristics.

Some CT regulatory agencies, beyond their well-known functions of providing the legal framework and safeguarding the integrity of research subjects, have implemented open databases with information on all the CTs they register and authorize. In this regard, the World Health Organization (WHO) manages the International Clinical Trials Registry Platform (ICTRP) https://apps.who.int/trialsearch/Default.aspx), in order to ensure free access to information33. Ogino D, Takahashi K, Sato H. Characteristics of clinical trial websites: information distribution between ClinicalTrials.gov and 13 primary registries in the WHO registry network. Trials. 2014;15(1):428. doi: 10.1186/1745-6215-15-428.
https://doi.org/10.1186/1745-6215-15-428... .

Although these are public databases and are available for all researchers, it was not possible to identify published studies on relevant aspects of the CTs that are oriented to oncological pathologies in Peru. Therefore, the aim of this research was to identify the characteristics of oncological clinical trials (OCT) reported in a 25-year period (1995 to 2019).

Motivation for the study: In Peru, clinical trials are presented for the evaluation of pharmaceutical products and medical devices in different specialties. The increase in the number of oncological trials is caused by an increase in the global prevalence of cancer. Therefore it, is necessary to determine the characteristics that these trials have had during the last 25 years.

Main findings: There is a variation in the number of clinical trials presented. We observed an increase in oncological trials, most of them sponsored by the pharmaceutical industry and mainly focused on the most prevalent types of neoplasms such as breast cancer.

Implications: Knowledge of the characteristics of oncological clinical trials will allow health professionals to identify the direction in which therapeutic development is headed.

We carried out an observational and descriptive study to evaluate the characteristics of oncology-related clinical trials that were submitted to the General Office of Research and Technology Transfer (OGITT) of the INS for evaluation and authorization between 1995 and December 31, 2019. The public information found in the REPEC was reviewed and freely accessed through the portal https://ensayosclinicos-repec.ins.gob.pe; the last review was carried out on January 3, 2020. The records found were collected in a database for analysis.

The variables evaluated in the OCTs were grouped into general, design, and studied product characteristics. The general characteristics included type of sponsor, trial status, number of Research Ethics Committees (RECs) that approved the OCT, and number of research centers where the study was conducted.

Design and studied product’s characteristics were analyzed in all OCTs submitted and in those authorized. Data not found were considered as “not registered” (NR).

This study did not require the approval of an ethics committee, since it was a secondary analysis of a free access-database, and because it did not contain data that could identify the subjects.

Regarding the general characteristics of the OCTs, we found that the most frequent type of sponsor was the pharmaceutical industry (74.9%). Most OCTs were authorized (n = 405; 86.2%), of which 61.2% were finished (n = 248). Nearly half (49.6%) of the OCTs were approved by only one REC and the most frequent (n = 249; 26.7%) was the one from the Instituto Nacional de Enfermedades Neoplásicas (INEN). Most of the OCTs (38.1%) were conducted in only one research center. The highest number of research locations for a single study was 14 (Table 1). The proportion of authorized OCTs varied over the years, with a tendency towards an irregular decrease (Supplementary material).

Regarding the design characteristics, most of the OCTs were in phase III, followed by phase II; the most used specific design was parallel groups (84.5%), adaptive CTs were the least frequent ones (basket = 0.4%, umbrella = 0.2). Among the authorized OCTs, open-label and double-blind CTs were found in similar frequency (47.9 and 46.4%, respectively); 85.2% were randomized (Table 2).

Thumbnail
Table 2
Characteristics of the design of oncological clinical trials presented and authorized during the period 1995-2019.

During the analysis of the studied product’s characteristics, we found that chemical products were the most frequent among the authorized OCTs (55.6%). Regarding the indication of the product, we found that most were therapeutic (91.4%) and those aimed at breast cancer (35.9%) stand out. Among those with palliative indications, products for emesis (45.7%) and pain (34.3%) were the most frequent. The most used main endpoint was the objective response rate, which was used in 47.0% of all the trials and 46.7% among those authorized (Table 3).

Thumbnail
Table 3
Characteristics of the studied product of oncological clinical trials presented and authorized during the period 1995-2019.

We identified that the number of OCTs submitted has varied annually. However, considering the proportion of OCTs with respect to the total number of registered CTs, an upward trend was evident, by 2019 these represented almost 50%. This behavior is not specific to Peru, according to the data registered in ClinicalTrials.gov and EudraCT, we found similar distributions in other countries 77. The Lancet Oncology. Clinical trial registry reporting: a transparent solution needed. The Lancet Oncology. 2019;20(6):741. doi: 10.1016/S1470-2045(19)30350-X.
https://doi.org/10.1016/S1470-2045(19)30... .

Traditionally, the main endpoints used in the OCTs were clinical improvement measures, such as the improvement of signs and/or symptoms, and the patient’s quality of life 1717. Kilickap S, Demirci U, Karadurmus N, Dogan M, Akinci B, Sendur MAN. Endpoints in oncology clinical trials. JBUON. 2018; 23(s1):1-6.. However, during the last decade, sponsors have used other criteria to achieve the accelerated approval of anti-cancer drugs, among these we have the tumor shrinkage evaluation and tumor growth retardation 1818. Wilson MK, Karakasis K, Oza AM. Outcomes and endpoints in trials of cancer treatment: the past, present, and future. The Lancet Oncology. 2015;16(1):e32-42. doi: 10.1016/S1470-2045(14)70375-4.
https://doi.org/10.1016/S1470-2045(14)70... . Given this scenario, regulatory agencies have been in charge of evaluating the relevance, case by case, of the use of substitute endpoints and of providing guidelines for reasonable use 1919. Food and Drug Administration. Clinical Trial Endpoints for the Approval of Cancer Drugs and Biologics [Internet]. Maryland: Estados Unidos. Departamento de Salud y Servicios Sociales; 2018. Disponible en: https://www.fda.gov/media/71195/download.
https://www.fda.gov/media/71195/download... . All of this has meant that currently the main endpoints used for these studies are the objective response rate, or progression-free survival, considering that the need for their use will always depend on the context of the disease and the magnitude of the effect, among other factors 2020. Kamat AM, Sylvester RJ, Böhle A, Palou J, Lamm DL, Brausi M, et al. Definitions, End Points, and Clinical Trial Designs for Non-Muscle-Invasive Bladder Cancer: Recommendations From the International Bladder Cancer Group. JCO. 2016;34(16):1935-44. doi: 10.1200/JCO.2015.64.4070.
https://doi.org/10.1200/JCO.2015.64.4070... .

A limitation of this study was that the information comes from what was registered in the REPEC, a platform created in 2007, which has been collecting data retrospectively on CTs that had previously been evaluated and authorized by the Ministerio de Salud. This leads to a possible information bias for data from the period 1995-2006. Despite this limitation, this study characterizes the most frequent group of CTs presented in our country in the last 25 years.

In conclusion, the frequency of the OCTs in Peru shows variations during the evaluated period, although proportionally an ascending behavior has been evidenced over the years. It was also possible to identify that phase II and III OCTs are the most frequent in our country. We evidenced that most studied products were for therapeutic use and were aimed at breast cancer.

The identification of OCTs with adaptive designs represents a challenge for ethics committees, patients, researchers and regulatory authorities alike. For this reason, in compliance with its role as the governing body in the area of CTs, the INS is called upon to establish training activities that guarantee an adequate implementation in our country.

Paula Cahuina-Lope is coordinator of the clinical trial evaluation team of the Executive Research Office, Nora Espiritu (at the time of submission of the article) was General Director of the General Office of Research and Technology Transfer. Gilmer Solis is an external consultant to the National Institute of Health. 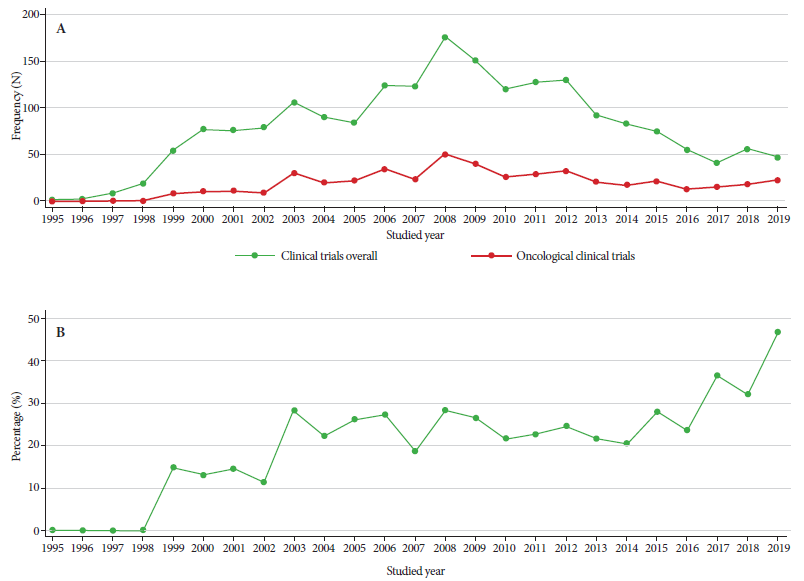 Table 2   Characteristics of the design of oncological clinical trials presented and authorized during the period 1995-2019.

Table 3   Characteristics of the studied product of oncological clinical trials presented and authorized during the period 1995-2019.