Dengue virus (DENV) comprises four serotypes, and each serotype is further divided into distinct genotypes. The increase in the incidence of dengue and the severity of the disease have been associated with the change in circulating genotypes as well as viral evolution.

During the 2019 dengue outbreak in Madre de Dios, initial diagnosis was made in patients by detecting the NS1 antigen with ELISA. Viral isolation in the C6-36 cell line was successful in 12 samples out of 32 processed. The virus was identified with monoclonal antibodies by indirect immunofluorescence, and simultaneously the samples were analyzed by real-time RT-PCR (qPCR-RT) at the National Referrral Laboratory of Viral Metaxenics of the Instituto Nacional de Salud (INS). All samples were identified as DENV2.

Following the protocol of Santiago et al. 33. Santiago GA, González GL, Cruz-López F, Muñoz-Jordan JL. Development of a standardized Sanger-based method for partial sequencing and genotyping of dengue viruses. J Clin Microbiol. 2019 Mar 28;57(4):e01957-18. doi: 10.1128/JCM.01957-18.
https://doi.org/10.1128/JCM.01957-18... , the amplified and purified products were sequenced by the Sanger method at the INS Molecular Biology Laboratory. The obtained sequences were assembled using the SeqScape software to obtain the complete consensus sequence of the E gene. The complete gene sequences were used for phylogenetic analysis using the MEGA X software and the Maximum Likehook algorithm. In addition, the support of each clade was evaluated using the Bootstrap method.

Thumbnail
Figure 1
Phylogenetic tree constructed with the Maximum Likehook algorithm showing the homology of DENV2 with the Cosmopolitan genotype from the Madre de Dios-Peru outbreak, 2019. Bootstrap value (>70) is represented at the root of each cluster.

This finding highlights the need to activate routine genomic surveillance in the laboratory as well as the need for it to include clinical-epidemiological information. It is necessary to conduct genomic surveillance of DENV 2 isolates from other endemic areas of the country to have a broader view of the circulation and to evaluate the route of entry and the spread of this new genotype in the Americas. Additionally, the study should be complemented in order to determine whether or not this new genotype is associated with severe cases of dengue.

To the staff of the Refrerral Laboratory of Madre de Dios and to Biologist Edwin Tineo for handling the samples; to the staff of the National Referral Laboratory of Viral Metaxenic Diseases and to Biologist Adolfo Marcelo and Lic. Nancy Susy Merino for processing the samples; to biologists Omar Cáceres and Henry Baylón of the National Referral Laboratory of Molecular Biology for their support with the phylogenetic analysis and to Dr. Oscar Escalante of the National Public Health Center of the Instituto Nacional de Salud for his opinion on the phylogenetic analysis; to Dr. Karim Pardo, executive director of DEPCEM-MINSA and Dr. Manuel Espinoza for their support with the clinical part of the outbreak intervention. To biologist Fernando Chapilliquen of the Centro Nacional de Epidemiología Prevención y Control de Enfermedades -CDC-Perú, for his epidemiological contributions. Special thanks to Dr. Leticia Franco and Dr. Jairo Mendez for their opinion on the phylogenetic analysis and for linking us with the Dengue Genomic Surveillance (ViGenDA) project of the Arbovirus Laboratory Network (RELDA) of PAHO and to Dr. Gilberto Santiago and Dr. Jorge Muñoz of the Centers for Disease Control and Prevention, Dengue Branch - Puerto Rico, for confirming the results.

Thumbnail
Figure 1
Phylogenetic tree constructed with the Maximum Likehook algorithm showing the homology of DENV2 with the Cosmopolitan genotype from the Madre de Dios-Peru outbreak, 2019. Bootstrap value (>70) is represented at the root of each cluster.

Figure 1   Phylogenetic tree constructed with the Maximum Likehook algorithm showing the homology of DENV2 with the Cosmopolitan genotype from the Madre de Dios-Peru outbreak, 2019. Bootstrap value (>70) is represented at the root of each cluster. 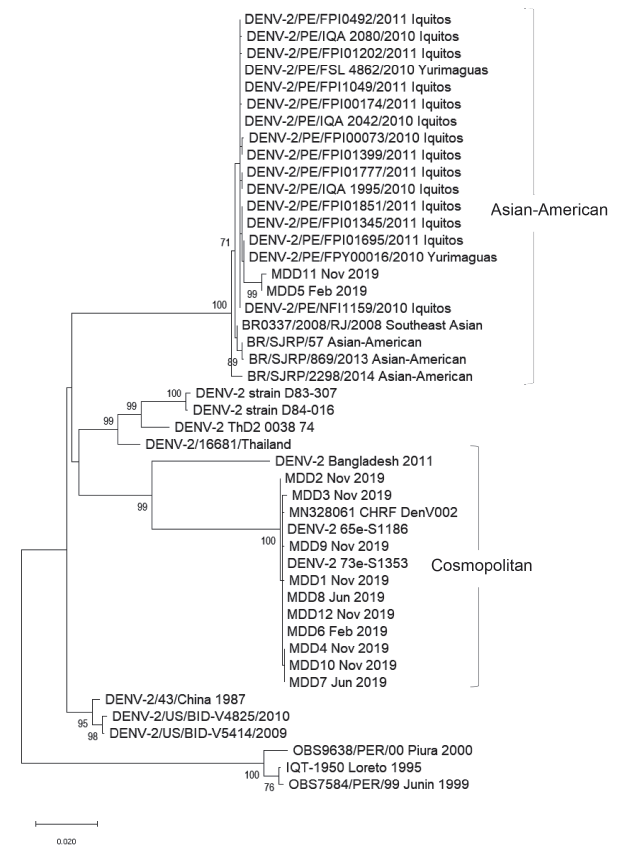