SECTION I
RESEARCH AND METHODOLOGIES

Mortality study in an asbestos cement factory in Naples, Italy

Occupational asbestos exposure can determine several diseases, which have been reported for many decades; among them, asbestosis [1-3], lung cancer [4-6] and mesothelioma [6-8].

Recently the International Agency for Research on Cancer (IARC) confirmed former evaluation that asbestos causes cancer in humans. Regarding cancer sites, evidence is sufficient for lung, larynx, ovary cancers and mesotheliomas, while there is limited evidence for colorectal, pharynx and stomach cancers [9].

Many studies conducted in Europe and North America showed higher mortality risks for lung and pleural cancer in asbestos-cement workers [10-18].

Italian studies conducted among asbestos-cement workers in Piedmont [19, 20], Emilia-Romagna [21], Tuscany [22], Lombardy [23-25], Apulia [26, 27], Sicily [28], Marche [29] and Venetia [30] contributed to the epidemiological evidence. Mortality among workers of the asbestos-cement factory located in Naples (Campania region) had not been previously studied [31].

The aim of this paper was to investigate the mortality in 1950-2005 of 1247 asbestos-cement workers employed in the Bagnoli Eternit plant.

The Eternit factory located in Bagnoli, a district of Naples, started its activity in 1939. Plant production activities virtually came to halt in mid-1943 and resumed in early 1947. Production ended permanently in 1986.

The Bagnoli Eternit plant information has been compiled based on the scientific paper published in 1960 [31] and the judicial examination carried out in 1980 [36].

The plant consisted of one large hall functionally divided into three Departments. In the Tubes Department asbestos-cement pipes and high-pressure pipes were produced. The asbestos bags deposit was located at the bottom of the Sheet Department, where asbestos-cement plain and corrugated sheets (for roofs, tanks, tubes with square or rectangular sections and chimneys) were produced. Finally, there was the Tile Department, where tiled floors were processed.

Asbestos bags were emptied by hand into the edge runner where asbestos was broken up. Asbestos was then mixed with cement into a mixing tank in 20% proportion. After seasoning, the pipes were finished off by cutting with a circular saw that caused a major emission of dust; a similar dispersion took place during the tubes head turning.

Airborne asbestos fibers concentration data showed high exposure, but there were insufficient data to estimate individual cumulative doses. Only generic dust monitoring data were in fact performed in the Sixties. In 1979, 64 environmental airborne asbestos fiber samplings (differentiated also for crocidolite), were collected in different areas of the plant (Table 1). Average total concentrations of asbestos fibers were in the range of 0.030 and 1.033 ff/cc, while crocidolite values ranged between 0.250 and 0.526 ff/cc. These measurements showed that in 1979 asbestos environmental pollution was still widespread, although the company reported from 1974 to 1978 relevant investments to reorganize the plant and improve safety.

Since its opening, in 1939, the Bagnoli Eternit plant hired 2340 workers (1924 males and 416 females). This study includes 1247 male workers who were hired between 1950 and 1986. The choice of restricting the cohort to workers hired after 01.01.1950 is due to the difficulty of following-up subjects hired before 1950. We studied only males because only 234 females were hired after 1950. Workers were identified on the basis of the factory rosters, where all workers were recorded on the day of hiring and on the day of retirement. Four subjects (0.3%) listed in the factory rosters were excluded from the cohort because of lack of information. These rosters were also the source for defining job histories.

The follow-up period ranged from January 1st, 1965 through December 31 2005 and the study subjects contributed for a total of 39 933 person-years of observation.

Causes of death were ascertained by Local Health Unit Epidemiological Services for 70.4% of the deceased subjects. For the remaining 29.6%, individual records were linked to the anonymous Italian mortality file by the National Bureau of Statistics (ISTAT). The record linkage was based on the following keys: gender, place and date of birth, place and date of death. Overall, causes of death were ascertained for 474 (93.9%) out of 505 subjects deceased after 1965. Causes of death remained unknown after the ISTAT linkage for 31 deceased subjects (6.1%).

All subjects contributed to the total person-years of observation until the latest available record. The underlying causes of death were coded according to the International Classification of Diseases, following the Eighth Revision (before 1980) and the Ninth Revision (from 1980 onwards).

In addition to the cohort mortality study, a validation of death certificates reporting asbestosis or pleural and peritoneal neoplasm was performed by a record linkage, respectively with the Italian Insurance Institute for Occupational Diseases and Injuries (INAIL) and the Italian National Mesothelioma Registry - Campania Regional Centre [37].

The relative risks were estimated using Standardized Mortality Ratios (SMRs-%), and the confidence intervals were calculated at 95% confidence level (95% CI), assuming the Poisson distribution of the number of observed deaths. 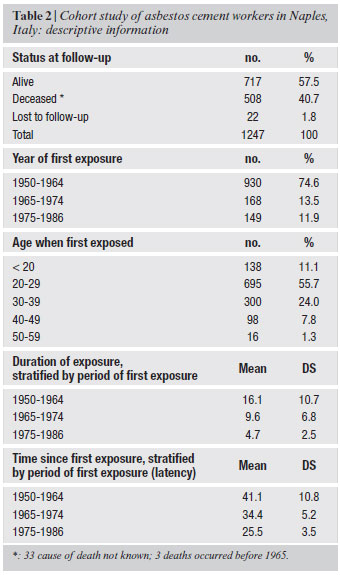 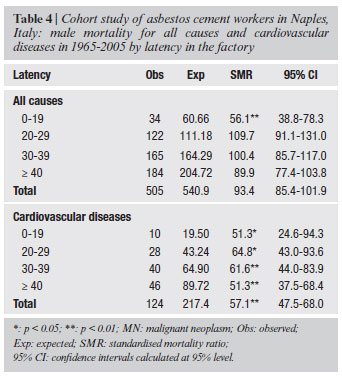 For pleural and peritoneal malignant neoplasms (MN) SMRs increased by latency, with highest values for > 40 years latency (Tables 5 and 6). 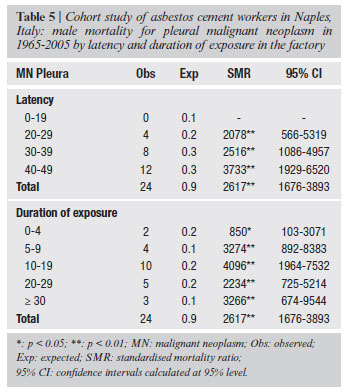 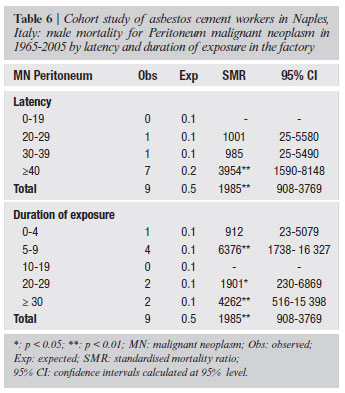 Pleural cancer mortality increased with exposure duration, the highest SMR is in the category 10-19 years, the increase is evident for 0-4 to 5-9 years. In the categories 20-29 and 30 + years the SMR point estimates decreased, the confidence intervals remained wide, always excluding the null value. For pleural MN the SMR for 0-4 years of exposure was significantly increased (Table 5).

SMR for lung cancer showed a statistically significant increase in the latency categories 20-29 and 30-39, and in the 20-29 years exposure duration category (Table 7). 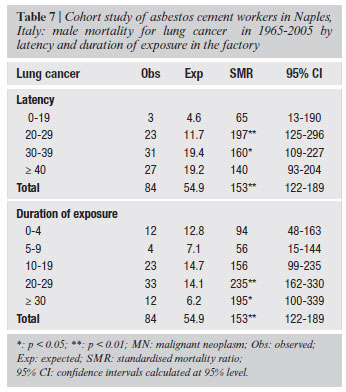 Only one death for asbestosis, out of 41, was observed in the category 0-9 years of duration of exposure (Table 8). Analysis by latency was not regarded as informative because of the long survival of this disease. 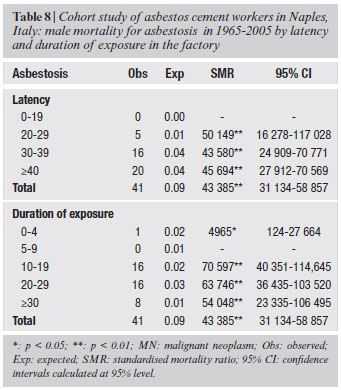 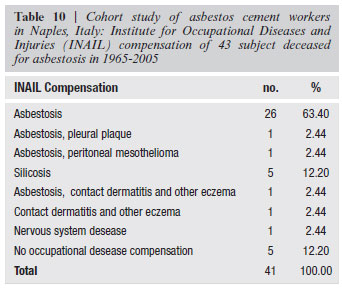 This study contributes to the description of the health impact of asbestos-cement production at the national level in Italy, and at the local level for the polluted site of Bagnoli - Coroglio (Naples).

Our results confirmed significant increase in mortality for pleural, peritoneal, and lung cancer, consistently with the recent IARC evaluation (9). Moreover, we recorded a non-significant decrease for stomach cancer, and an increase of colorectal cancer, and no increase for laryngeal cancer.

More disaggregated mortality data are available at Local Health Unit (ASL) level [41] and show no evidence of different stomach cancer mortality between ASL NAPOLI 1 (including Bagnoli district) and Campania region. So the stomach cancer mortality decrease in the cohort could be attributable more to SMR wide variability (SMR 52.9; 95% CI: 19.4-115.2), than to local characteristic (for example diet) of the Bagnoli area residents.

Considering non-cancer causes of death, we found 41 observed vs. 0.09 expected deaths for asbestosis. Moreover asbestosis was the underlying cause of death for 41 cohort members and a contributory cause for further 45 subjects.

Results didn't show a clear HWE in the cohort, since we didn't observe a SMR increase with increasing latency categories for cardiovascular diseases.

SMRs for lung cancer by exposure duration and latency showed a curvilinear trend, which decreased after 40 years of latency and 30 years of exposure. This finding is compatible with those found in other cohorts of asbestos cement workers [14, 20, 29, 43].

SMR for pleural cancer increased from 0-4 to 5-9 and especially from 10-19 years of asbestos fibers exposure. In the subsequent categories of duration of exposure, the point estimates of SMR decreased while the confidence intervals remained very wide, even if always excluding the null value. Given the extremely small number of expected cases, this pattern cannot be further commented.

Strengths and limits of this study are listed below.

Cohort identification was carried out using plant personnel records, which are considered the best source for cohort enumeration for plant-based cohorts [44]. We reconstructed a satisfactory proportion of the entire study population: out of 1251 male workers, 1247 (99.7%) were included in the cohort.

Health outcomes were assessed by mortality data derived from ISTAT death certificates. They were non-differentially misclassified in the cohort group and in the reference population. Unspecified causes of death, representing an indirect indicator of mortality data quality, constituted 1% of overall mortality. In order to validate death certificates for asbestosis, pleural and peritoneal MN, we performed a record linkage with the National Institute for Occupational Diseases and Injuries (INAIL) and the National Mesothelioma Registry (ReNaM) data. Results were satisfactory: 71% of asbestosis deaths were compensated by INAIL, and 83% of pleural and peritoneal MN were recorded in ReNaM as malignant mesothelioma.

Concerning exposure assessment, data on airborne asbestos fibers concentration showed heavy and widespread exposure until the factory shut down. There were insufficient data to estimate individual cumulative doses. We analyzed duration of exposure, consisting in duration of employment in the factory, as dose surrogate. In studies encompassing such a long period of observation, the exposure estimation given by duration is often the only choice and may not be improved by exposure measurements because of their inaccuracy [45].

We couldn't make separate fiber type evaluation, such as chrysotile, crocidolite and amosite, because they were used in the plant in different percentages depending on the final products.

An inception cohort approach was adopted, in order to avoid survival bias. The study population thus consisted of workers hired between 1950 and 1986; the workforce active in 1950, but hired before this date, was excluded.

Vital status was ascertained for 98% of the cohort subjects and the cause of death was known for 94% of the deceased subjects. The incomplete ascertainment of cause of death could have produced a slight underestimation of cause specific SMRs. 55 years observation period was long enough to recognize the majority of asbestos related health effects.

Regional population was chosen as reference because national rate is a weighted average of heterogeneous Italian regional rates, while local mortality rates are not stable enough to assume the absence of random error and could also be influenced by the Bagnoli Eternit cohort data.

Tobacco smoke has an etiological role for lung and laryngeal cancers. No individual information on smoking habits were available for the study, as is often the case in occupational cohort investigations. There are no indications that the proportion of smokers in Bagnoli Eternit factory was different than in the general population and, moreover, if any confounding was present, it should act in the same direction for both laryngeal and lung cancer. Recent evaluations of asbestos exposure and smoking interaction on lung cancer risk support a multiplicative synergism [46, 47].

In summary, the Bagnoli Eternit asbestos cement cohort showed an increased mortality for asbestosis, lung cancer and pleural and peritoneal mesothelioma, consistent with the available epidemiological evidence. Extension of follow-up, and assessment of mesothelioma risk among population resident in Bagnoli area and among family members of Eternit workers thus appear to be warranted.

We thank Emma Sandomenico of the Local Health Unit Napoli 1 (Naples, Italy) and Stefano Marchetti of the National Institute of Statistics (Rome, Italy) for their determinant contribution to cause of death research. We thank Michele Santoro for his contribution to the data management.